Accessibility links
Here's What We Know About Neil Gorsuch Neil Gorsuch is the president's nominee for the Supreme Court. What do we know about him as a person? For one, he likes to drive a convertible with the top down.

Neil Gorsuch is the president's nominee for the Supreme Court. What do we know about him as a person? For one, he likes to drive a convertible with the top down.

It seems like five weeks and not five days since the president announced he would be nominating federal appeals court Judge Neil Gorsuch to the open seat on the U.S. Supreme Court.

GARCIA-NAVARRO: So Nina, you've been justifying your salary, I think, this week, grinding out about a dozen pieces. It's been pretty busy. What have you got to tell us that we didn't know before?

TOTENBERG: That Judge Gorsuch, the quintessential proper-looking, proper-acting gentleman drives a gold-colored Mercedes convertible and that he drives it with the top down as often as possible.

He lives on a ranch with a couple of horses, some chickens, his wife, two teenage daughters and a barn cat. He is from Colorado and, if confirmed, would be one of three justices not from the East Coast. But what really makes him the diversity candidate is that he's a Protestant and would be the first Protestant on the court since 2010, when Justice John Paul Stevens retired. There were six Catholics when Justice Scalia was alive and three Jews. Now there's going to be a Protestant.

You've been talking to people all week about Judge Gorsuch. What kind of judge is he? Give us a glimpse of what people have told you.

TOTENBERG: His colleagues, Democratic and Republican appointees on the court, really love him. He's a good listener. He's easy to work with. He's not someone who skews the facts to fit what he wants. One Democratic appointee said to me - we could do a lot worse (laughter). In the rest of the legal community, especially those who argue before the court and study the court, he's widely respected and he's liked. Here's what professor Melissa Hart said. She's the director of the center for the study of constitutional law at Colorado University.

TOTENBERG: So you might guess from that that professor Hart is a liberal. But what you don't know is that she's the granddaughter of the late Watergate special prosecutor, Archibald Cox, who was fired by President Nixon.

TOTENBERG: And she thinks that Gorsuch is a straight-shooter when it comes to presidents abusing their power, which she sees as rather important at the moment. And lawyer Neal Katyal shares that opinion. He served as chief advocate in the Supreme Court for part of the Obama administration. He's taken a lot of heat for a piece he wrote in The New York Times saying that Gorsuch should be confirmed. There's a lot of bad feeling among Democrats for the nearly year-long refusal by the Republican-controlled Senate to even consider President Obama's nominee for this seat. But here's what Katyal said.

NEAL KATYAL: He's just an - a really fabulous judge. He's a judge's judge. And, you know, I certainly wish that the Democrats won the election and had their own person up there. But in this world we are in, what I care most about is a judge who's going to be independent from the executive and call it like he sees it. And that's how I see Judge Gorsuch.

GARCIA-NAVARRO: So a lot of positive feedback. I understand he's also supposed to be a really terrific writer with a very readable style.

TOTENBERG: For a judge. 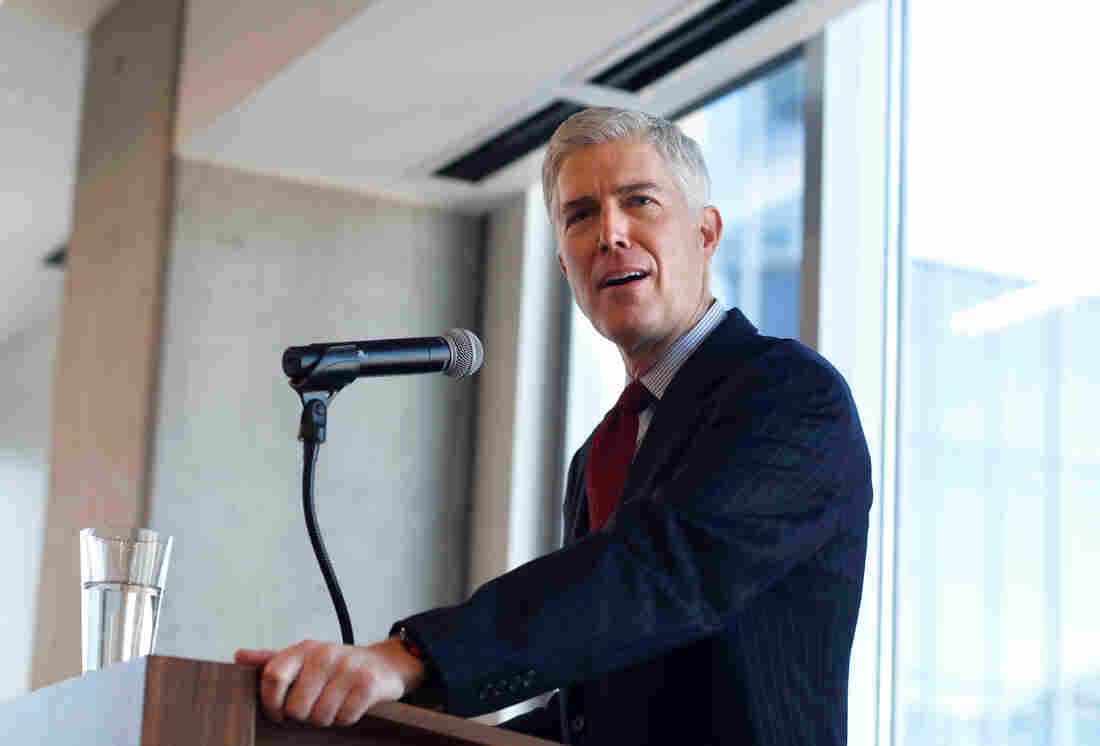 Judge Neil Gorsuch of the 10th U.S. Circuit Court of Appeals makes a point while delivering prepared remarks before a group of attorneys last Friday at a luncheon in a legal firm in lower downtown Denver. David Zalubowski/AP hide caption 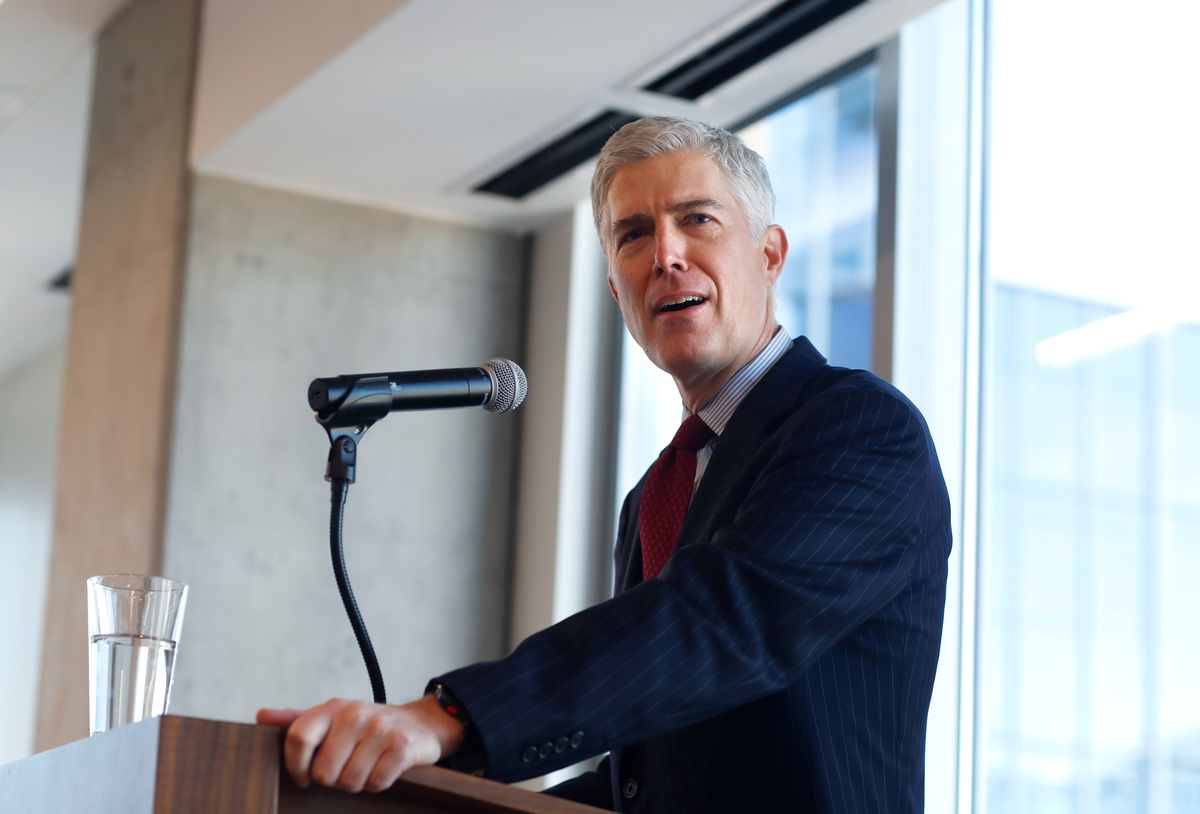 Judge Neil Gorsuch of the 10th U.S. Circuit Court of Appeals makes a point while delivering prepared remarks before a group of attorneys last Friday at a luncheon in a legal firm in lower downtown Denver.

President Trump has selected federal appeals court Judge Neil Gorsuch to fill a Supreme Court seat that has sat vacant for nearly a year, setting up a blockbuster confirmation hearing that could put the new White House's domestic political agenda on trial in the U.S. Senate.

The selection fulfills an early campaign promise by Trump to nominate a solidly conservative judge with a record of strictly interpreting the U.S. Constitution. Gorsuch, 49, sailed through an earlier confirmation process for a spot on the federal appeals court in Denver.

Only weeks after his nomination in 2006, the Senate confirmed him by voice vote. The American Bar Association rated him as "unanimously well qualified" at the time.

Gorsuch has a sterling legal pedigree. He clerked for two Supreme Court justices, Byron White and Anthony Kennedy. He also served as a clerk on the second most important appeals court in the country, in Washington D.C., for conservative Judge David Sentelle.

Like Justice Antonin Scalia, whom he is in line to replace, Gorsuch has cultivated a reputation as a memorable and clear author of legal opinions. He also considers himself to be an originalist. Lawyers who practice before the U.S. Court of Appeals for the 10th Circuit, where Gorsuch currently works, said he is a popular and approachable judge.

SCOTUSblog, the leading Supreme Court blog, described some of Gorsuch's parallels to Scalia as "eerie."

Among other rulings that came to national attention, Gorsuch sided in favor of "religious freedom" claims made by the Little Sisters of the Poor and the owners of the craft company Hobby Lobby, who challenged language in the Affordable Care Act that required them to pay for contraceptive coverage for employees. The Supreme Court backed those Hobby Lobby challengers, in a divided vote, in 2014.

In a lecture to the conservative Federalist Society in Washington more than three years ago, Gorsuch elicited laughter from the audience as he quoted from the 1853 Charles Dickens novel Bleak House, referenced the work of the late novelist David Foster Wallace, and discussed irony and the law.

"Like any human enterprise, the law's crooked timber occasionally produces the opposite of the intended effect," he said. "We turn to the law earnestly to promote a worthy idea and wind up with a host of unwelcome side effects that do more harm than good. ... We depend upon the rule of law to guarantee freedom, but we have to give up freedom to live under the law's rules."

Off the bench, Gorsuch in 2006 published a book called The Future of Assisted Suicide and Euthanasia, criticizing the practice and defending the "intrinsic value" of human life. He also contributed to The Law of Judicial Precedent last year.