Accessibility links
Why Donald Trump Won The Presidency And Why Obamacare Is Getting More Popular One thing — relative deprivation — might explain why Obamacare is gaining in popularity, why people are marching in the streets, even why Trump won the presidency. 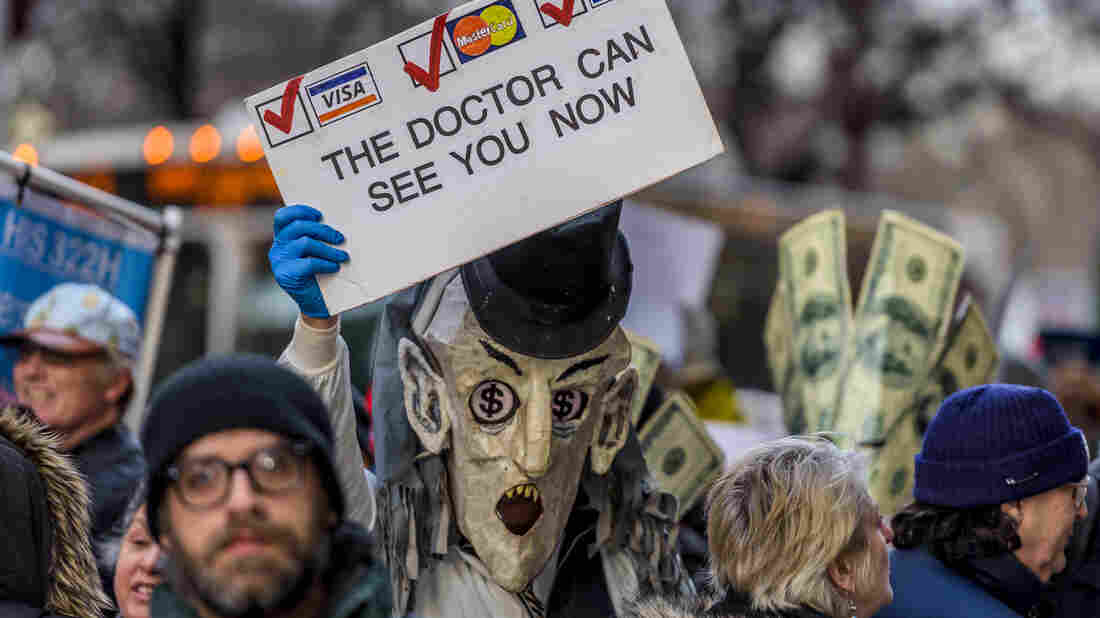 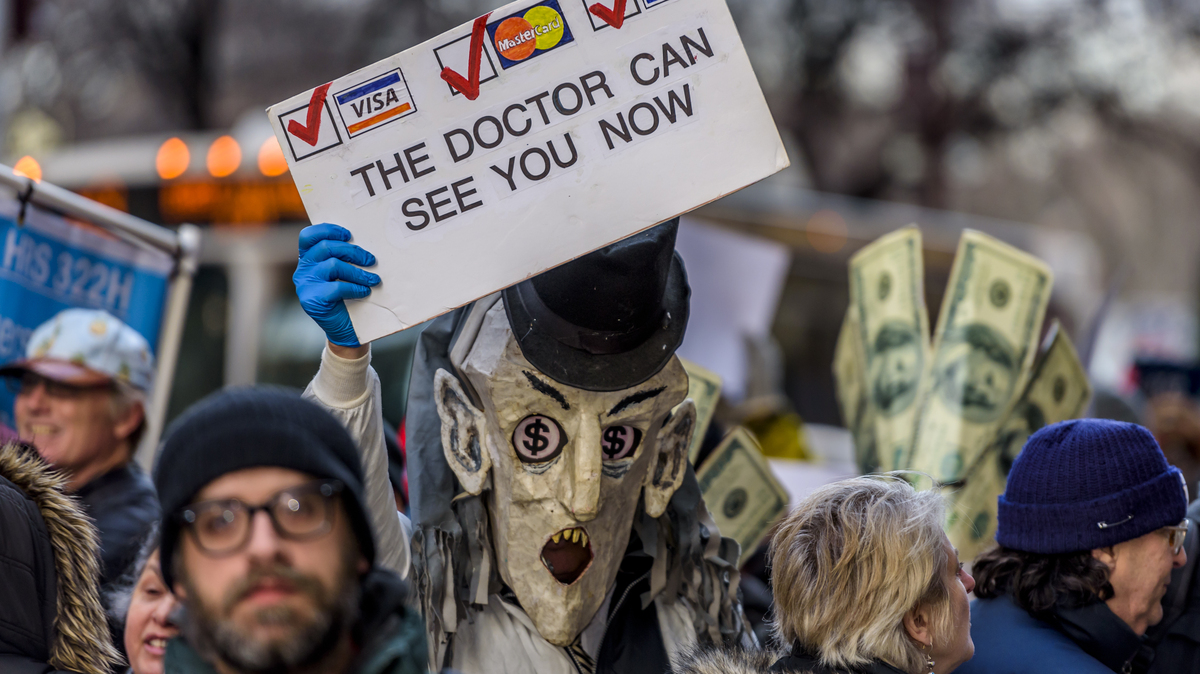 Outside Trump Tower in New York City, health care justice advocates and other grass-roots groups gathered to demand that Trump not agree to repeal the Affordable Care Act.

Suddenly, people are more in favor of the Affordable Care Act than are against it. For the first time, more people believe Obamacare is a good idea than think it is a bad idea, as a recent NBC News/Wall Street Journal poll showed.

Another poll from Fox News shows a similar pattern, as the New York Times' Margot Sanger-Katz and Haeyoun Park pointed out in a story Wednesday. "CNN/ORC Poll shows last-minute love for Obamacare," blared a CNN headline the day before Donald Trump's inauguration.

There are a few reasons the balance might be tipping: It may be that growing participation in Obamacare has slowly tipped polls. It may be that Democrats' messaging that millions might lose coverage is sinking in. But a particularly compelling theory could mix in with either or both of these: relative deprivation.

Where Does Your Member Of Congress Stand On Trump's Immigration Order?

Relative deprivation describes being deprived of something a person feels entitled to. For example, they used to have it, expected to have it, or see that others have it. The theory helps explain this political moment of anger in America — whether it's the rise in popularity of Obamacare (in part because many on the left who didn't think it went far enough see the law threatened), why people are marching in the streets to protest the new president and even why Trump won in the first place.

Relative deprivation is the primary force driving political rebellion, as political scientist Theodore Gurr theorized in his 1970 book Why Men Rebel. That gap — between what people think they should get and what they think they will realistically get — creates discontent, he writes, and that discontent "is the basic, instigating condition for participants in collective violence."

When restaurant-employee advocate Saru Jayaraman told the Washington Post about the pain workers feel when they lose existing benefits, she was talking about this type of discontent.

"Very few restaurant workers before the ACA had anything at all," she says. "When you have [insurance], then you start to deal and treat things that have been a problem for a very long time. When you cut it off, it's almost worse" than never having insurance at all.

The newfound acceptance of Obamacare isn't quite "collective violence," of course. But it is a remarkable change of heart around a much-maligned policy. The Times' Sanger-Katz and Park point out that the demographics of who, exactly, is upset about the potential for repeal say a lot about why they are upset.

Support for the law has grown across many subgroups, but the largest movements appear to be in Democratic-leaning groups. Those people may not have loved Obamacare, but they worry more about its repeal.

Suddenly, the fear of losing Obamacare has grown big enough to trump ambivalence about the law.

Relative deprivation was a major strategy for Trump

It's maybe not the most mind-blowing of theories — threaten to take something away from people that they think should be theirs, and they get mad.

But it is an elegant explanation for so much of the turmoil of the current political climate, when many groups seem to fear they could be losing out on what they once had.

Emily Kalah Gade invoked the idea of relative deprivation this week at the Washington Post's Monkey Cage, explaining why she thinks the Women's March had such strong appeal:

People took to the streets on Saturday not because of new issues, but because values and protections they thought they could safely rely upon were under threat.

The sense of impending loss of power has been simmering for years among particular demographics. For example, some white men — especially those who have lost economic clout — have felt this way for years, as sociologist Michael Kimmel observed in his 2013 book Angry White Men.

"Revolutions are made not by those with 'nothing left to lose,'... but precisely by those with something to lose — and a fear that they are, in fact, about to lose it," he wrote.

Again, that book was written in 2013, two years before Trump ran for the presidency. But Kimmel argues that idea plays a big part in explaining how Trump won the presidency in the first place. Trump again and again drew attention to disappearing goods-producing jobs in auto factories and coal mines, saying that with his help, America could regain those lost opportunities.

"These guys, they made the same bet that their fathers and grandfathers made, and they lost the bet," as they watched those mills and factories close, he continued.

Indeed, Trump's entire campaign was about bringing back a theoretical, fading, "great" America.

Relative deprivation is also behind the recent protests

Now that Trump has won, entire other classes of people feel threatened and are taking to the streets, as Gade points out.

Many at the Women's March, for example, voiced a fear that women might lose the ability to obtain abortions, as well as a more amorphous fear of losing respect and social standing they have gained over time. Many women felt a real threat in the fact that America chose a president who had, at one point, bragged about groping and kissing women.

Likewise, many immigrants and Muslims are speaking out against Trump's executive action banning travel from seven Muslim-majority countries, and many also turned out at protests against the ban.

This is not to say that people protest only for their own personal good. It's entirely true that many, many people in the streets are protesting on behalf of others. Many non-Muslims and non-immigrants are out protesting the ban on travel from majority-Muslim countries, for example, and plenty of men showed up for women's marches worldwide — because their moral foundation of what they believe America is supposed to be is being threatened.

It's also worth observing that the protests aren't just about women and immigrants; many have also been about (large-D) Democratic politics. The recent protester cries of, "Do your job!" at Senate Minority Leader Chuck Schumer and House Minority Leader Nancy Pelosi were the cries of liberals begging sympathetic legislators to seize whatever meager power they still have.

The left isn't 100 percent unified, but the power of relative deprivation has helped more or less bridge what was one of the bitterest political divides — between many Bernie Sanders and Hillary Clinton supporters. After Democrats lost a presidential election (plus some Senate and House races) that almost every forecaster saw as a likely win, the divided party suddenly seemed to come together, as one organizer of the women's march told CNN.

"We have already proven that Hillary and Bernie Sanders supporters can work together against fascism, xenophobia and racism," said Linda Sarsour, executive director of the Arab American Association of New York.

Nothing unites, it seems, like the sense of vulnerability that comes from a blistering defeat.

Who can wield it better?

Relative deprivation is all about two things: expectations and whether they can be met. And all politicians play the expectations game — they make promises, then try to deliver on them. However, much of Trump's political success is arguably because he plays this game so well and so heavily. He continually tells people that they are unjustly ignored (America's "forgotten men and women") or missing out on what they once had ("All of the men, we're petrified to speak to women anymore").

It was a campaign built on the narrative of being an outsider, punching up at the people in power (nevermind that he's a billionaire himself).

Now, he's in power, and the question is whether Trump can deliver on expectations. He has had an action-packed first two weeks with his travel ban, promise to build a wall and rollback of regulations. He even has made moves to show that he's bringing back a handful of those lost goods-producing jobs.

But four years is a long time. If some of those who supported him don't see their own personal economic prospects improve, they could jump ship.

The same goes for the suddenly more-popular Obamacare: Trump at one point raised expectations that he would make sure there was "insurance for everybody" (though his fellow Republicans worked to tamp that down afterward).

Now, he and his party have to deliver, one way or another, or they could face the anger of a country whose expectations have changed since the law was passed.