Accessibility links
Judge Gorsuch's Originalism Philosophy Contrasts With Mentor's Pragmatism Neil Gorsuch is a self-proclaimed "originalist." It is a philosophy very different from that of his mentor, Justice Byron White. 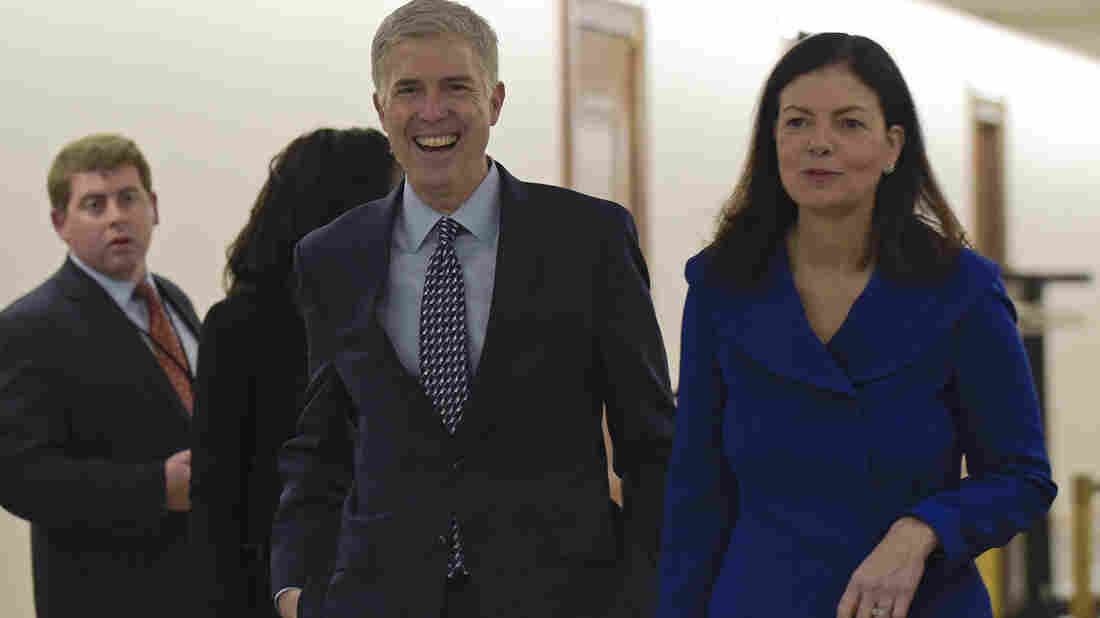 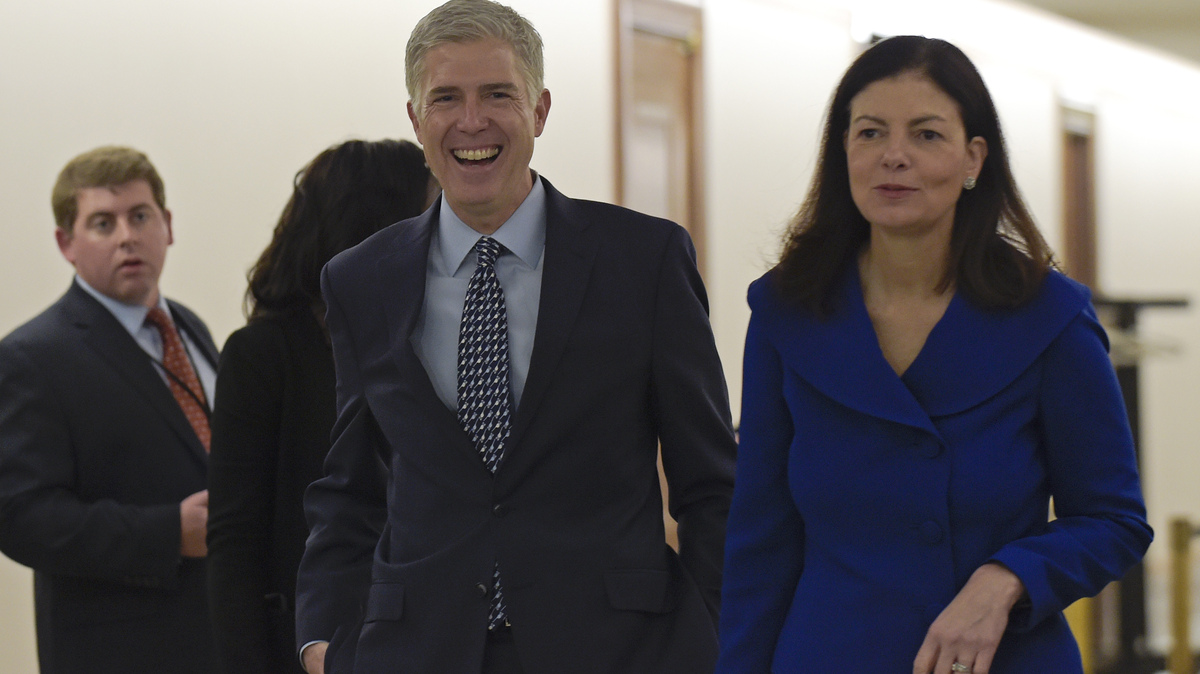 Supreme Court nominee Judge Neil Gorsuch (center) arrives with former New Hampshire Sen. Kelly Ayotte on Capitol Hill last week for a meeting with Sen. Bob Corker, R-Tenn. There are different kinds of conservative judges, from the pragmatist to the originalist. Gorsuch is a self-proclaimed originalist.

When the country elects a Republican president, and there's an opening on the U.S. Supreme Court, that president will nominate a conservative to fill the seat. The question is: What kind of a conservative?

There are different kinds of conservative judges, from the pragmatist to the originalist. Judge Neil Gorsuch, President Trump's nominee, is a self-proclaimed originalist.

The late Justice Antonin Scalia spent decades on the Supreme Court promoting originalism, which he defined this way:

"The constitution that I interpret and apply is not living but dead, or as I prefer to call it, enduring. It means today not what current society, much less the court, thinks it ought to mean, but what it meant when it was adopted."

Judge Gorsuch, who would succeed Scalia if confirmed, has a similar but less blunt way of putting it.

In a 2016 speech, he declared that while legislators should consider policy questions and moral convictions in shaping the law, judges should do neither. Rather, "judges should instead strive to apply the law as they find it, focusing backwards, not forwards," on the original meaning of the Constitution when it was written 230 years ago.

"The text is the best evidence," Gaziano says. "If a phrase in the Constitution is unclear, we look to how that phrase was used in other contexts." Originalists try to decipher whether the phrase was a "term of art" at the time, or look to contemporary dictionary definitions.

At the announcement of his nomination last week, Gorsuch cited as his first mentor one of the Supreme Court justices he clerked for, Byron White.

White, however, was a very different kind of conservative. He was a pragmatist, observes Allan Ides, who also clerked for White and is now a professor at Loyola Law School in Los Angeles.

"Originalism is kind of odd when you think about it," Ides comments. Rather than ask the judge to consider the consequences of a decision, advocates of originalism want the judge to focus only on "what would have been done 200 years ago.

"It's a peculiar theory that I think the public is attracted to because it sounds so simple and so true, but it's completely false," Ides contends.

Ides notes that Justice White was one of the two dissenters from the Supreme Court's Roe v. Wade abortion decision. But he looked forward as well as back. "And if you read his opinion, part of it is very pragmatic," he observes, adding that White argued the decision would not work and went too far.

"Pragmatism, it can embrace a wide range of points of view, it's just that it's based on reality. So my objection to Gorsuch is I don't like the way he thinks. I don't think he thinks broadly enough." Ides says Gorsuch is stuck in the "narrow tunnel" of originalism.

Ides adds that originalists aren't the only judges who look to the original meaning of the Constitution. Liberal judges do that, too; they look at the text and structure as well. Indeed, when the Supreme Court ruled 5-4 that the Constitution guarantees an individual's right to own a gun, both the majority opinion, written by Scalia, and the dissent cited historical records to make their case.

Both, Ides contends, used history in an adversarial way.

"But they're both plausible interpretations of the history and the text," Ides said. "It just shows it's kind of an empty technique. It pretends to be something it isn't."

Ides sees the conservative agenda on the court over the past 10 to 20 years as aimed at limiting the power and role of the federal government. The potential ultimate irony is that for the Trump administration and its aggressive use of federal and executive power, that could be bad news.