Accessibility links
Social Media Turns Super Bowl 51 Into A Proxy Fight For The 2016 Election The politics mainly came in the commercial breaks, until social media users realized the Atlanta Falcons' statistical command was being crushed by a blue wall. 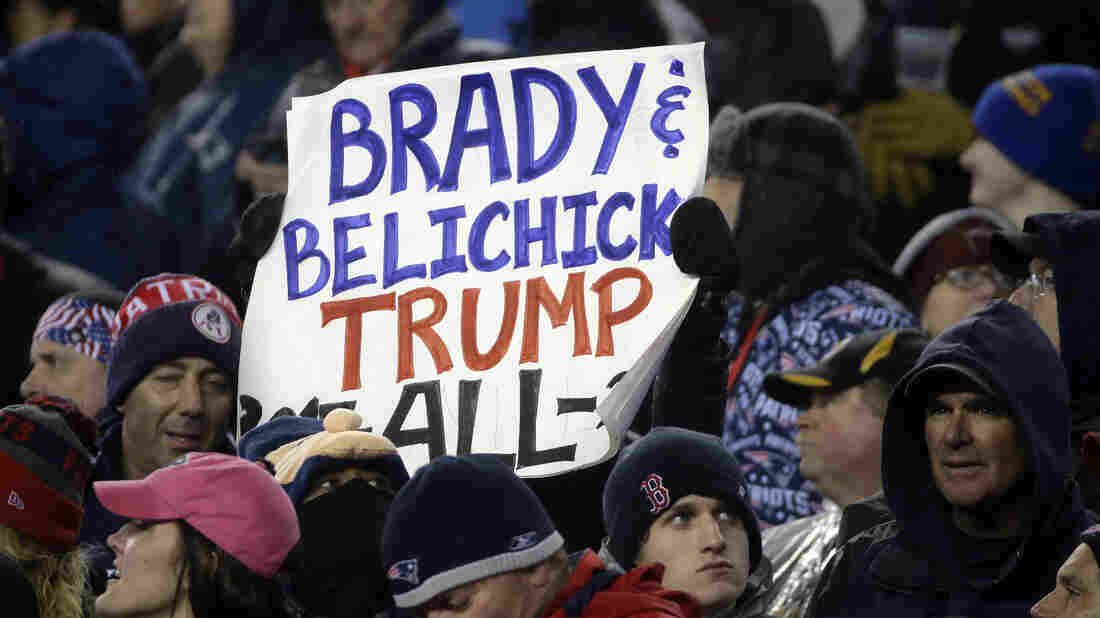 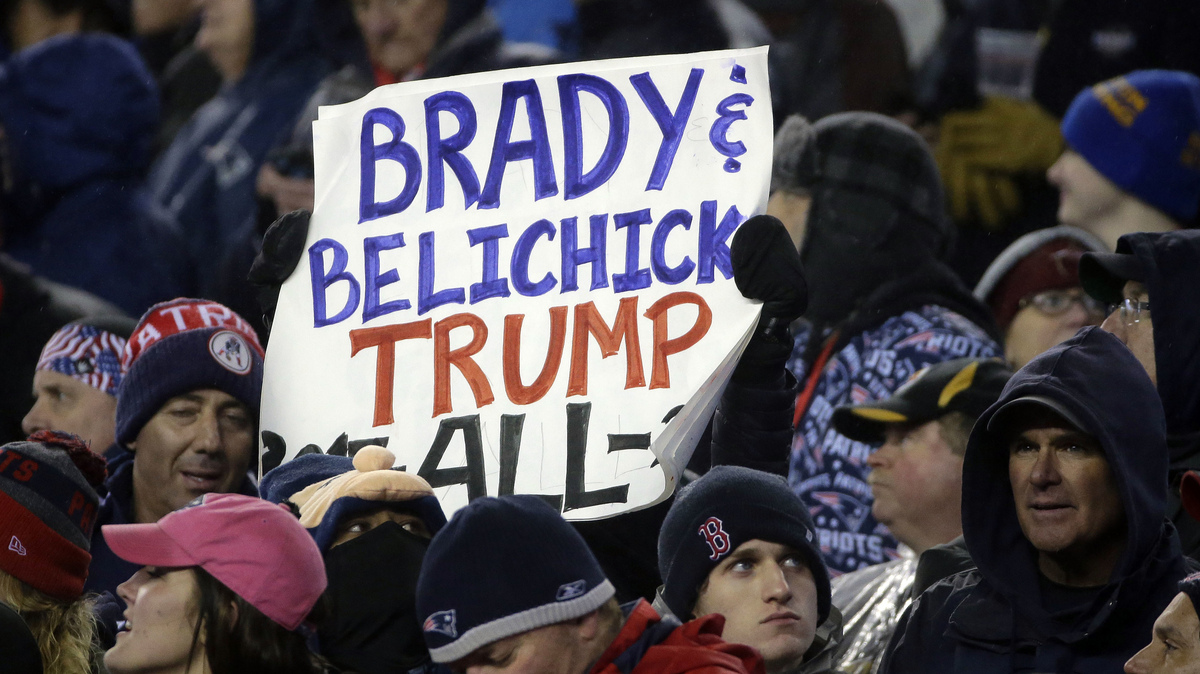 How could the first Super Bowl of the Trump era escape politics?

If you were just watching the game on TV, the politics were mostly subtle. Sure, there were the political ads. There were ads for everyone from NASCAR to Airbnb, which has taken on President Trump's travel ban.

The Politics Of The Super Bowl

The Politics Of The Super Bowl

Super Bowl Ads 2017: What Works, What Doesn't And What Gets Political

But Madison Avenue seemed to care more about who won the popular vote than who won the election. The overtly political ads celebrated diversity, globalism and immigration — there was even one about The Wall that wasn't allowed to show The Wall.

There was social commentary packed into a contrasting pair of back-to-back ads — one from Audi where a father thinks to himself about all the social limitations he won't let into his daughter's mind, followed by a lighter ad for Mr. Clean where the husband does the cleaning.

A pregame Coca-Cola ad brought back from 2014 featured "America The Beautiful" sung in many different languages, which drew plenty of divided reaction.

Then there was that hair ad proclaiming, "America, we're in for at least four years of awful hair."

For the ad-makers, it's not just a matter of how many people voted for which party last year, though. Democratic pollster Geoff Garin offered a reminder that areas that voted for Hillary Clinton in 2016 produce nearly two-thirds of the country's economic output — a pattern that goes a long way to explain Trump's victory.

Trump may have won the electoral college, but Clinton won the places that generate 64% of US economic activity. Reflected in #SuperBowl ads. pic.twitter.com/QNeCKB7zjD

Back inside NRG Stadium in Houston it was a light touch. Things started with the heart-warming reemergence of former President George H.W. Bush and his wife Barbara, who were both recently hospitalized, to conduct the coin toss.

In a brief moment, cast members from the Broadway smash hit Hamilton took a jab at patriarchy, asking the Almighty to "crown thy good with brotherhood... and sisterhood... from sea to shining sea." (Vice President Mike Pence was again in the audience for the cast's performance, but there was no booing this time.)

The game began as kind of a shocker. The dynastic Patriots were faltering. The Atlanta Falcons were surging all through the first half, and Nate Cohn of The Upshot sent up a prophetic stat:

Atlanta now has an 86% chance of winning, per ESPN. That's about the same Clinton's chances heading into the election pic.twitter.com/fNpBPSO8tJ

Halftime approached with a lot of questions about tone. Lady Gaga was the lone star in the Texas night sky, emerging on the roof of the stadium with a constellation of lit-up drones behind her. It was a collection of red drones and blue drones, at first divided, coming together as one to resemble the American flag.

Before the game, Gaga had told reporters, "I believe in the spirit of equality and the spirit of this country, as one of love and compassion and kindness."

She is no fan of Trump, but she didn't really go there on the stage. The symbols were present throughout her performance — most notably singing "Born This Way," with its message of inclusiveness across all lines of race, sexuality and gender.

I'm one of 100 million #SuperBowl fans that just went #Gaga for the Lady, & her message to all of us. https://t.co/8AoNqjwr1b

But if you weren't into the message, it was easy enough to sit back and enjoy the singing and spectacle. Lady Gaga was using a live mic, but there were no live-mic moments.

So that was it. If halftime came and went without controversy, then it seemed that the impossible had happened. The first Super Bowl of the Trump era came without politics slathered all over it.

Perhaps it was all teed up from the start — Bleacher Report, for example, framed the game as "more than a game, but a clash of cultures." It quoted players anonymously saying they were rooting for the Patriots because of Trump. Even a Patriots player said if they won, he would boycott the trip to the White House.

Team owner Robert Kraft and star quarterback Tom Brady are friends with Trump. Brady stirred controversy during the season because a "Make America Great Again" hat was spotted in his locker. Meanwhile, the Falcons' owner spoke out against Trump's immigration ban.

Somehow, the Super Bowl was destined to become a rehash of the 2016 campaign.

There was no way the Patriots could come back, right? They were down by 18 at the half, and the biggest comeback in Super Bowl history had been just 10. It wasn't even within the margin of error.

Well, New England came out of the locker room ready to claw back in the second half. The Falcons, with their Clinton-esque lead, as interpreted by the statisticians, were about to face their own version of the blue wall. Danny Amendola was prepared to Make The Patriots Great Again.

The improbable back-to-back 2-point conversions. The first overtime in Super Bowl history. The Patriots did everything they needed to do, and there just weren't enough votes left in Detroit or the Philly suburbs to turn it around.

If you were inside the often insufferable world of Beltway Twitter Sunday night (that many of us inhabit), there was no risk of missing out on the joke.

I can't believe the guy with the foreign model wife and a sketchy history with the rules just won after being written off.

Bernie would have beat the Patriots.

The Falcons have to start winning governors races

OK, I'll admit, it was hard to resist.

JIll Stein is asking for an instant replay

The president, of all people, was mum on Twitter during the game after a weekend of blasting a "so-called judge" over blocking Trump's immigration order. In the end, Trump — who got pretty close with a prediction of an 8-point Patriots win — was excited for his victorious friends Brady, Belichick and Kraft.

What an amazing comeback and win by the Patriots. Tom Brady, Bob Kraft and Coach B are total winners. Wow!

And, as for the experts, well, again we were hearing that probability ain't perfect.

One possible issue: ppl think models are making special predictions. They're not. They're saying what you already know: 28-3 = probably win!

We have reflected in the past on whether social media ruined the 2016 election. It would be grossly out of proportion to suggest that the political rabbit hole some on Twitter went down last night ruined anything — especially when you see how happy Gronk was.