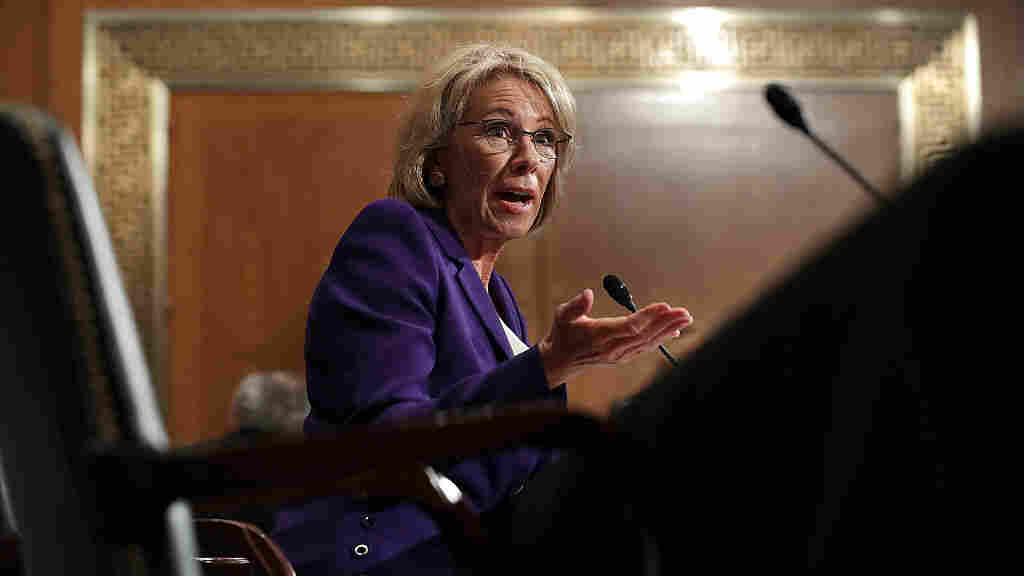 Betsy DeVos, President Trump's pick to be the next secretary of education, testifies during her confirmation hearing before the Senate Health, Education, Labor and Pensions Committee last month. Chip Somodevilla/Getty Images hide caption 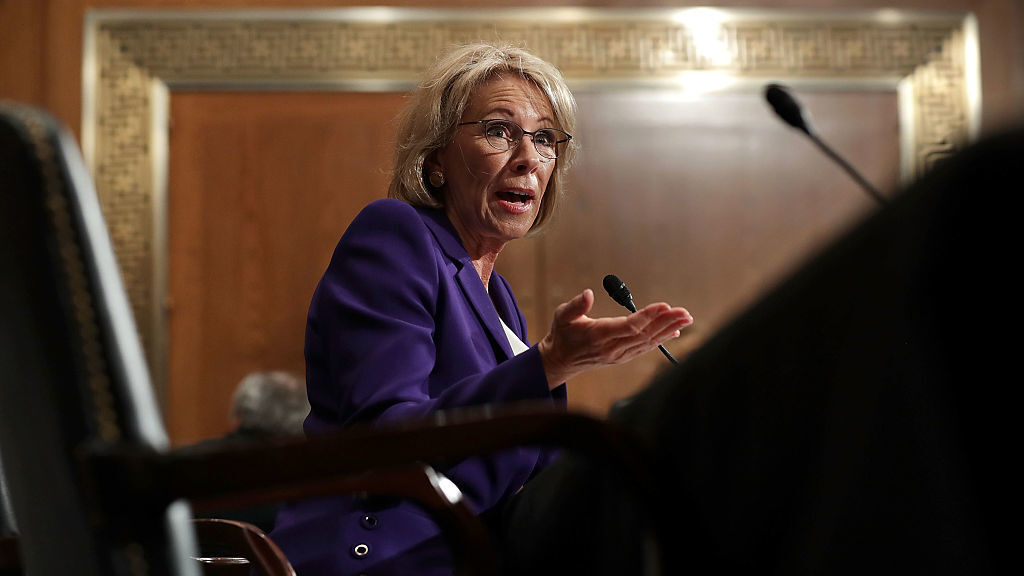 Betsy DeVos, President Trump's pick to be the next secretary of education, testifies during her confirmation hearing before the Senate Health, Education, Labor and Pensions Committee last month.

Senate Democrats held an all-night session Monday night into Tuesday morning in a last-ditch effort to try to stop President Trump's nominee for secretary of education, Betsy DeVos, from being confirmed.

Among those who took to the floor was Sen. Elizabeth Warren of Massachusetts, who said it was "difficult to imagine a worse choice to head the Department of Education."

"Betsy DeVos doesn't believe in public schools," Warren said. "Her only knowledge of student loans seems to come from her own financial investments connected to debt collectors who hound people struggling with student loans, and, despite being a billionaire, she wants the chance to keep making money on shady investments while she runs the Department of Education."

During DeVos' confirmation hearing, Warren pushed the nominee on how she would "protect against waste, fraud and abuse," citing Trump University, a for-profit organization that was at the center of a $25 million settlement agreement in November.

Right now, DeVos just barely has enough votes to get confirmed. Two Republican senators — Lisa Murkowski of Alaska and Susan Collins from Maine — both announced last week they won't support her nomination. That means there's a 50-50 split right now, with Vice President Pence expected to break the tie with a vote slated for Tuesday afternoon.

The tactic from Democrats can't stop a vote from happening; Cabinet members are no longer subjected to a 60-vote threshold to end debate. Instead they're hoping the overnight rally of sorts will give members of the public more time to call in and pressure their representatives to rethink their position.

"I know for a fact there are other Republicans who are feeling the heat and could come around," Sen. Patty Murray of Washington, the top Democrat on the Senate Health, Education, Labor and Pensions Committee, said Monday afternoon on the Senate floor.

DeVos has become one of Trump's most controversial nominees, eliciting strong public backlash and prompting thousands of phone calls, letters and emails from voters urging senators to oppose her nomination.

A major GOP donor and former chairwoman of the Michigan Republican Party, DeVos has no previous experience in public education, though she has been a longtime champion of of school choice and vouchers.

She also had a rough confirmation hearing last month that seemed to expose her weaknesses and inexperience. She was tripped up when asked about accountability standards and the Individuals with Disabilities Education Act. Those missteps were even lampooned on Saturday Night Live over the weekend.

The delay in voting on DeVos has also had a domino effect on another of Trump's nominees. Alabama Sen. Jeff Sessions, the president's pick for attorney general, is still needed to cast a critical vote in DeVos' favor. So his confirmation vote can't be held until the education nominee is moved through.

The Senate is also primed to vote this week on Georgia Rep. Tom Price's nomination to run the Department of Health and Human Services, as well as Steven Mnuchin for secretary of the Treasury. Democrats don't have the votes to stop either one, but they have been exhausting the maximum amount of time on the floor to debate nominees, stretching the process for each one out over a couple of days.

GOP leaders have threatened to keep the Senate in session into the weekend to get all of those nominees confirmed this week.