Accessibility links
Funeral Homes Often Make Pricing Confusing To Consumers An NPR investigation finds the death care industry can often be confusing and unhelpful to consumers who must make high-priced decisions at a time of grief and financial stress. 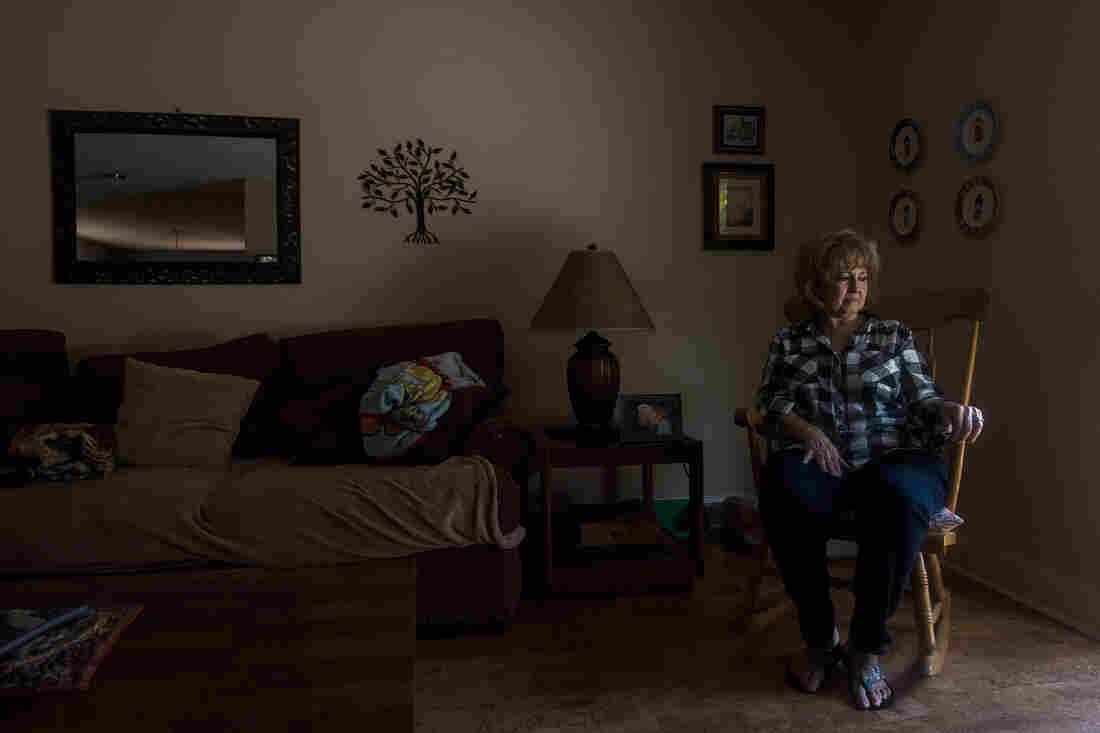 Ellen Bethea at her home in Jacksonville, Fla. After her husband died, she paid $7,000 for her husband's cremation and funeral. She was unaware that the same company offered the same cremation services for much less. Laura Heald for NPR hide caption 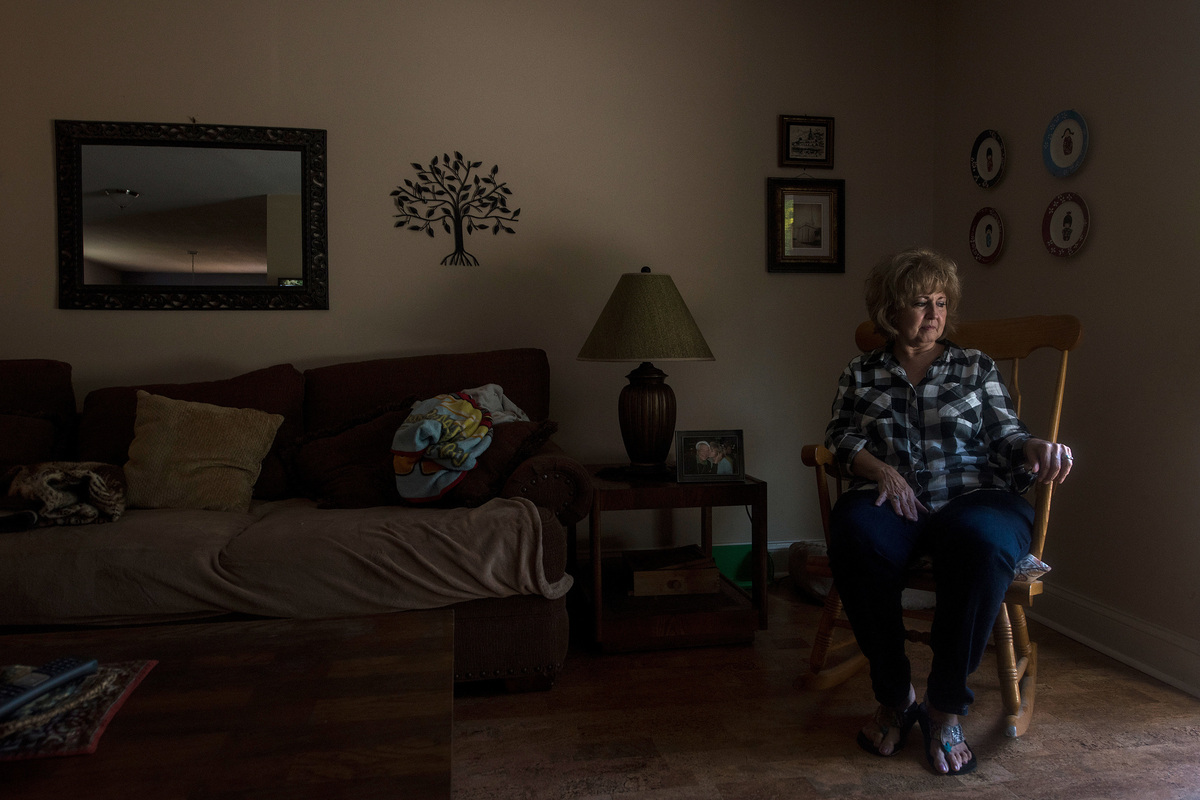 Ellen Bethea at her home in Jacksonville, Fla. After her husband died, she paid $7,000 for her husband's cremation and funeral. She was unaware that the same company offered the same cremation services for much less.

This story is part one of a two-part investigation. Read part two here.

Ellen Bethea sat alongside her husband's hospital bed after doctors told her that Archie, the man she had been married to for almost five decades, wouldn't make it.

"As soon as everybody else was asleep and I was sitting there with him, he passed on," she remembers. "So I think he kind of waited for me to be with him."

Bethea says her husband had several health problems and died of liver disease.

Later that day in November 2015, the staff at the hospital near her Jacksonville, Fla., home asked Bethea something she hadn't prepared for: Which funeral home did she want to use?

Bethea had never planned a funeral before, but knew of only one in town — Hardage-Giddens Funeral Home of Jacksonville. Some of her family and friends had used it and, she said, it had a good reputation. She and her family went there the next day.

After meeting with a staff member, they walked out with a bill of over $7,000.

Bethea provided a copy of the itemized funeral bill to NPR. One thing quickly stood out, but only if you know something about Jacksonville's funeral market.

The cost of Archie's cremation — $3,295 — was more than twice the amount charged elsewhere in Jacksonville by the company that owns Hardage-Giddens. The cremations are done in the same place and in the same way.

In a months-long investigation into pricing and marketing in the funeral business, also known as the death care industry, NPR spoke with funeral directors, consumers and regulators. We collected price information from around the country and visited providers. We found a confusing, unhelpful system that seems designed to be impenetrable by average consumers, who must make costly decisions at a time of grief and financial stress.

Funeral homes often aren't forthcoming about how much things cost, or embed the information in elaborate package deals that can drive up the price of saying goodbye to loved ones. 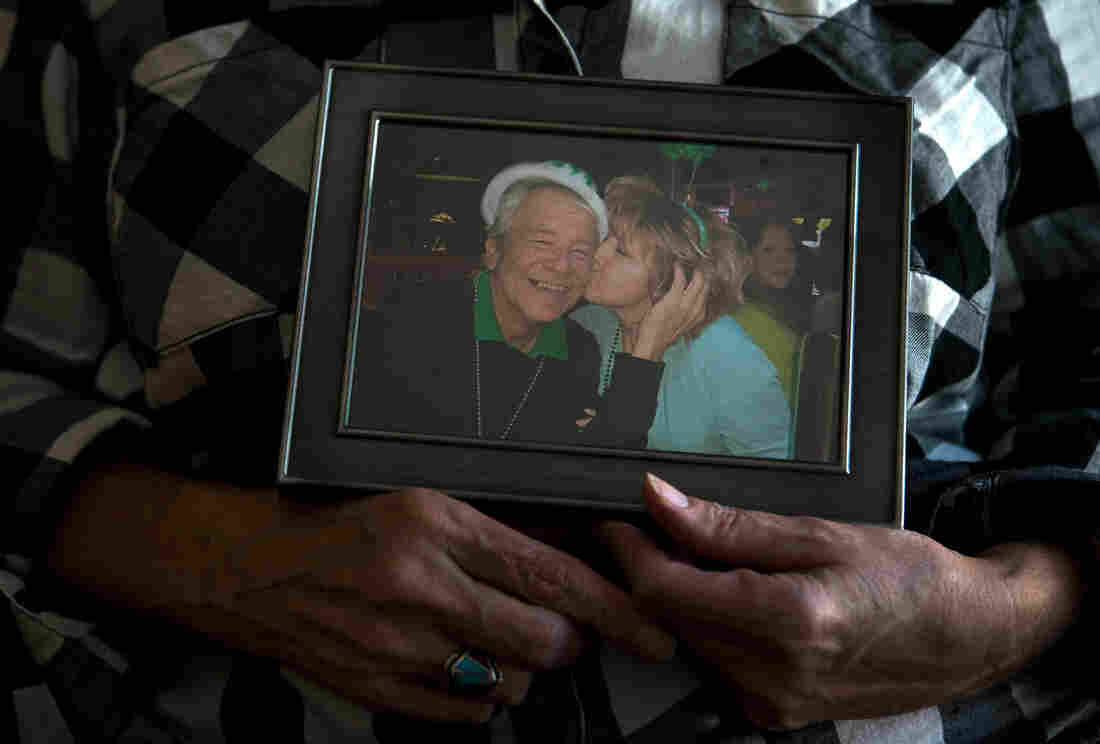 Ellen Bethea holds a picture of herself and her late husband, Archie. Laura Heald for NPR hide caption 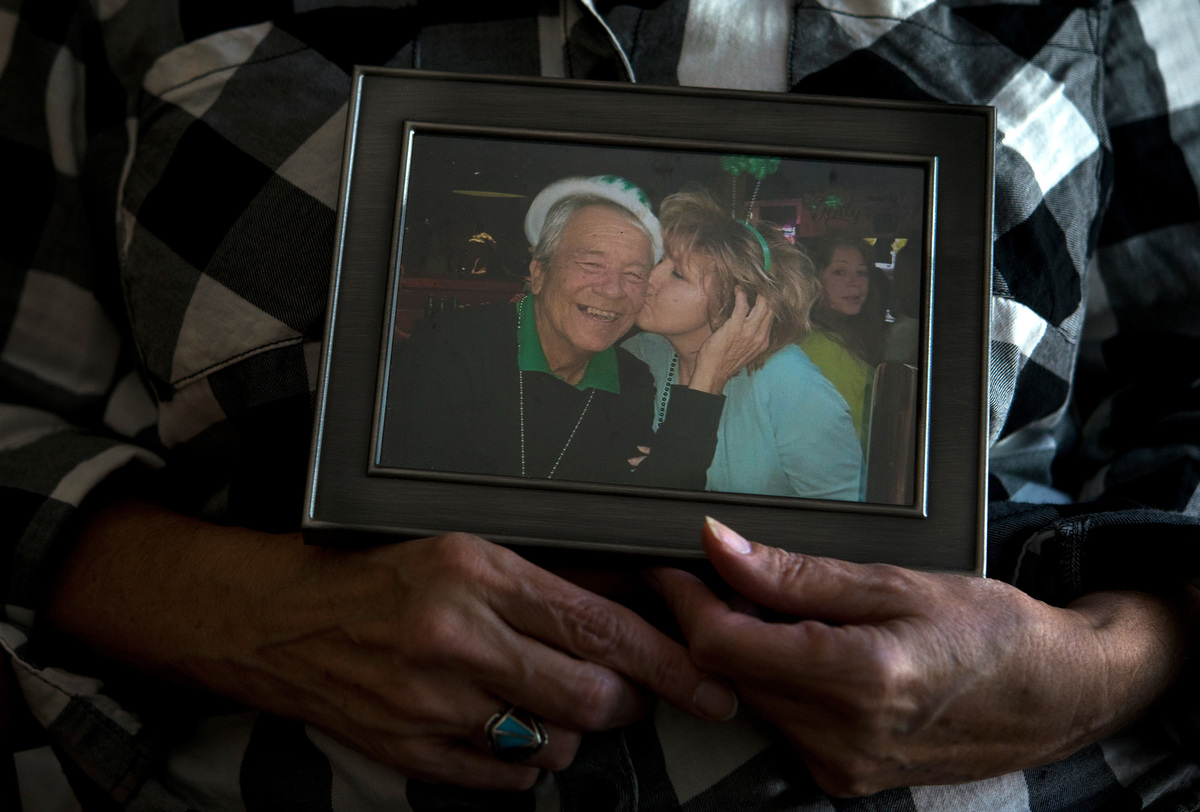 Ellen Bethea holds a picture of herself and her late husband, Archie.

While most funeral businesses have websites, most omit prices from the sites, making it more difficult for families to compare prices or shop around. NPR reporters also found it difficult to get prices from many funeral homes, and federal regulators routinely find the homes violating a law that requires price disclosures.

In Jacksonville, Hardage-Giddens and several other businesses in and around Jacksonville are part of a large, corporate-owned portfolio of about 1,500 funeral homes and several hundred cemeteries.

The owner and operator is Service Corporation International (SCI), a multibillion-dollar company traded on the New York Stock Exchange.

The Houston-based firm claims 16 percent of the $19 billion North American death care market, which includes the U.S. and Canada. Company documents say it has 24,000 employees and is the largest owner of funeral homes and cemeteries in the world.

The company also sells them for lower prices at strip-mall storefront outlets under other brands such as Neptune Society and National Cremation Society.

In communities around the country, it's common to find wide swings in prices for funeral services.

"That to me, starts to cross a line into consumer deception," says Joshua Slocum, executive director of the Funeral Consumers Alliance, a death care industry watchdog group based in Burlington, Vt.

Slocum was talking generally about markets such as Jacksonville, where a company's centralized crematory handles remains from a variety of differently branded outlets — from posh funeral homes to humble storefront cremation societies.

The cremations are all the same, but some will cost much more than others, depending on where the consumer made the arrangements, and which of the company's brand names appears on the invoice.

"You only get that lower price for the cremation society if you happen to know that it exists and is owned by the same business," Slocum says. "I'm not saying they're doing something illegal, but I am questioning whether or not we can really say, 'Oh, they give a much higher level of service.' " 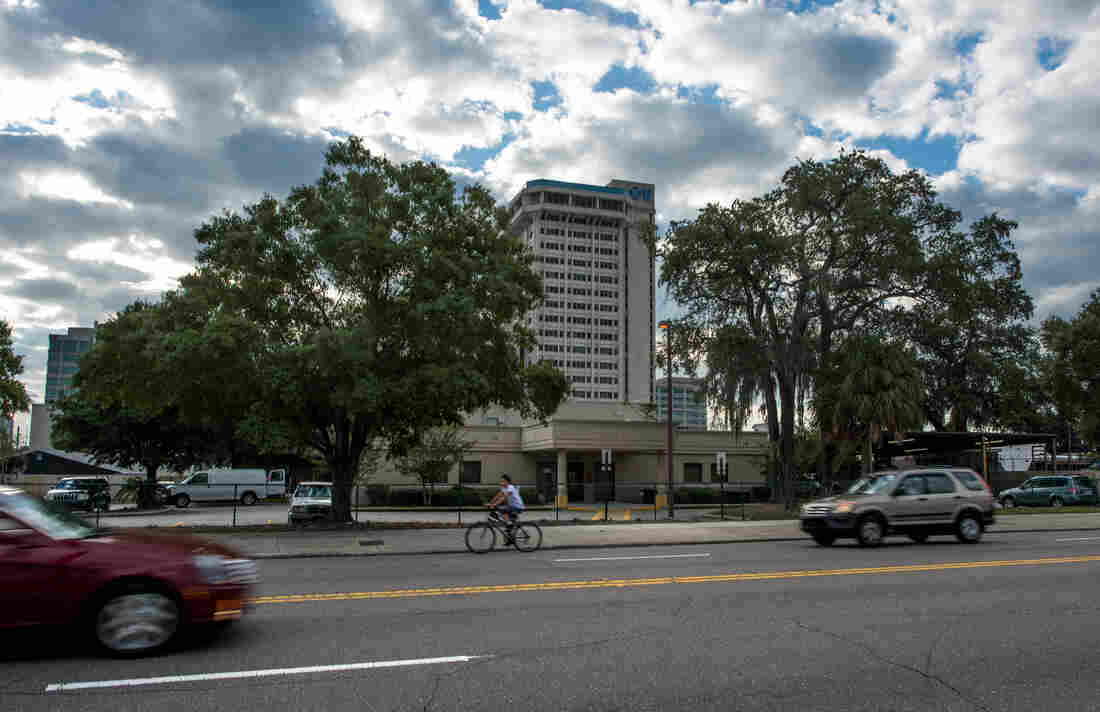 The front of 517 Park St., a crematory that serves multiple funeral homes. The building is located between downtown Jacksonville and the Riverside neighborhood. Laura Heald for NPR hide caption

The cremations arranged through all those outlets are performed in a large crematory at 517 Park St. in Jacksonville. The crematory's supervisor, Troy Brown, wrote on his LinkedIn profile that the Park Street facility serves 14 funeral homes.

"Direct cremation is the same no matter where you go," says Slocum. "When we're talking about situations where some consumers do not know or can't find out that that same business offers the same service at a lower price, maybe at a similar location, that is when I would have a problem with it."

But Scott Gilligan, a lawyer for the National Funeral Directors Association, says comparing the two cremations is "like saying all weddings are the same."

"Just like if I want a hamburger at a gourmet place, it's the same hamburger I'm going to get at McDonald's. But it's going to cost more because of the atmosphere, because of what is being done. It's choices," Gilligan says.

According to Gilligan, when consumers choose a funeral home, they're generally not making that decision on price. They're looking at other factors, such as reputation and location.

When it comes to identical services, such as Jacksonville's cremations, which have different brand names and different prices, Gilligan says: "Well, that is simply someone offering a service, or offering a division, which is going to cater to people who are looking for the price."

One thing the storefront and the larger funeral homes have in common is an upselling strategy. Both try to sell consumers packages that bundle together multiple goods and services. This makes all of the funerals more expensive.

Bethea says it happened to her.

"Well, actually, I think they only showed us one package that they had," she says. 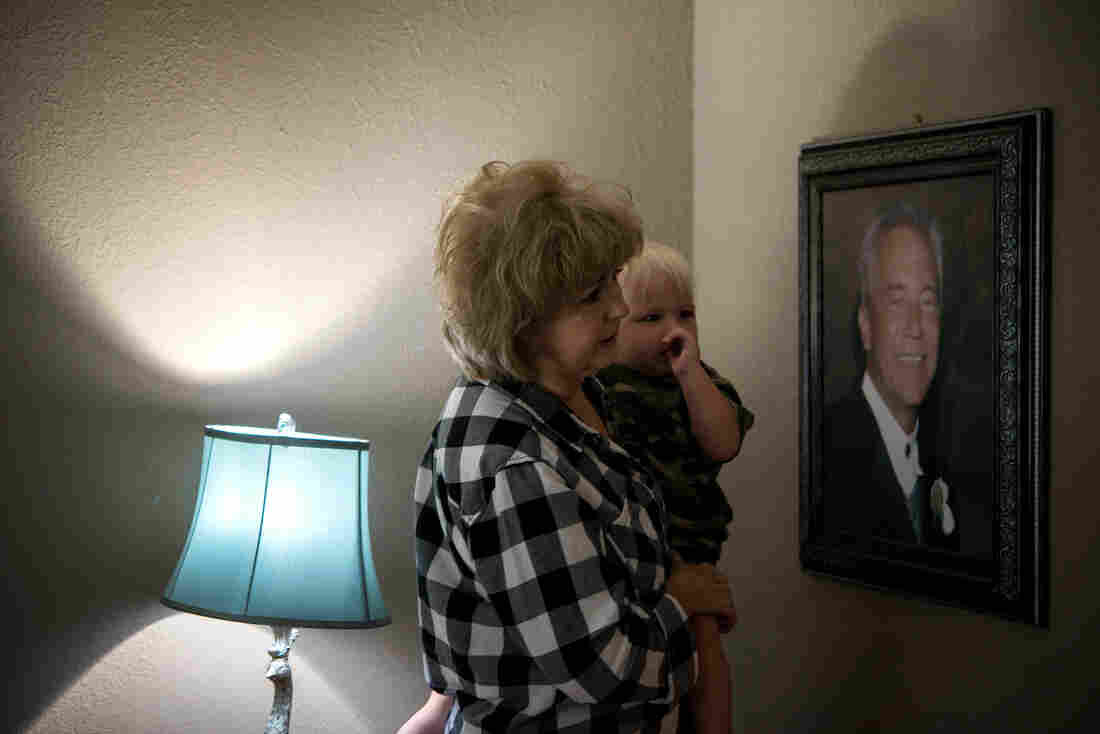 Ellen Bethea and her great-grandson, Lucas, look at a painting of her late husband, Archie. Laura Heald for NPR hide caption

Ellen Bethea and her great-grandson, Lucas, look at a painting of her late husband, Archie.

That package, known as the Honor Cremation Service, included a number of extra charges, including $495 for stationery and $345 for an Internet memorial.

That price premium is a problem the federal government has tried to fix with "the Funeral Rule," a regulation in place since 1984.

It requires itemized price lists. But funeral directors are still free to emphasize packages in the sales process, as they did with Bethea.

"You know, Archie didn't have hardly very much life insurance — maybe 5,000 — and I had, you know, a little bit of money in the bank, and it took everything."

SCI, whose officials declined to speak with NPR for this story, tells consumers in sales materials that buying a funeral package saves them money.

But company executives tell investors a different story. In a presentation to Wall Street investors last year, the company said consumers spend an extra $1,900, on average when they buy a package, versus an "a la carte" funeral.

For some context, the national median cost of a funeral with a burial, not including cemetery costs, is over $7,000.

SCI CEO Tom Ryan told investors: "Think about society today. We are in a hurry, right? Everybody is on the clock ... What we find is when we deliver these packages, people tend to spend more money because they're buying more products and services."

He added that consumers, in fact, like the packages.

"And most importantly, we survey our customers, and the highest customer satisfaction scores come from people that select the packages. So we know we're doing the right thing. The packages allow us to do that for all parties involved," Ryan said.

Packaging goods and services under multiple brands and setting different prices for identical services are strategies the company uses in many of its markets, which span 45 states and the District of Columbia.

In Raleigh, N.C., for example, the company's full service funeral home and storefront cremation office are across the street from each other. Crossing that street can save you — or cost you — $1,895.