Accessibility links
Republican Lawmakers Propose New Law To Reduce Legal Immigration Republican senators have introduced a bill to reduce legal immigration numbers to the U.S. With the ascendance of Trump, an anti-immigrant faction has moved from the fringe into the mainstream. 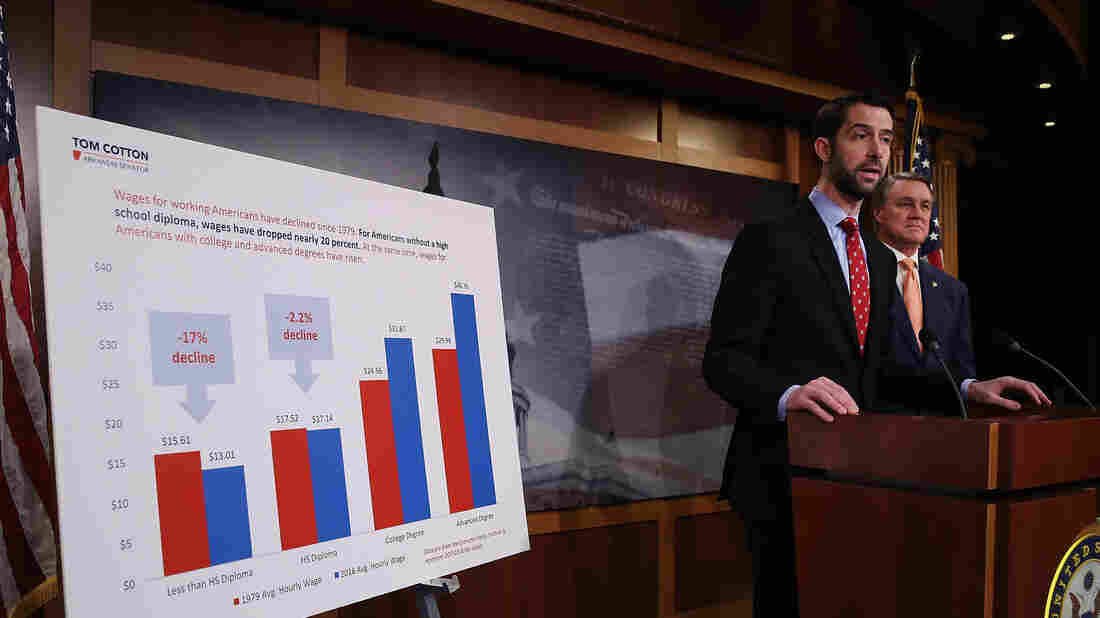 Sens. Tom Cotton, R-Ark., and David Perdue, R-Ga., hold a news conference after unveiling immigration legislation they say is aimed at cutting the number of green cards issued annually by the United States in half. Mark Wilson/Getty Images hide caption 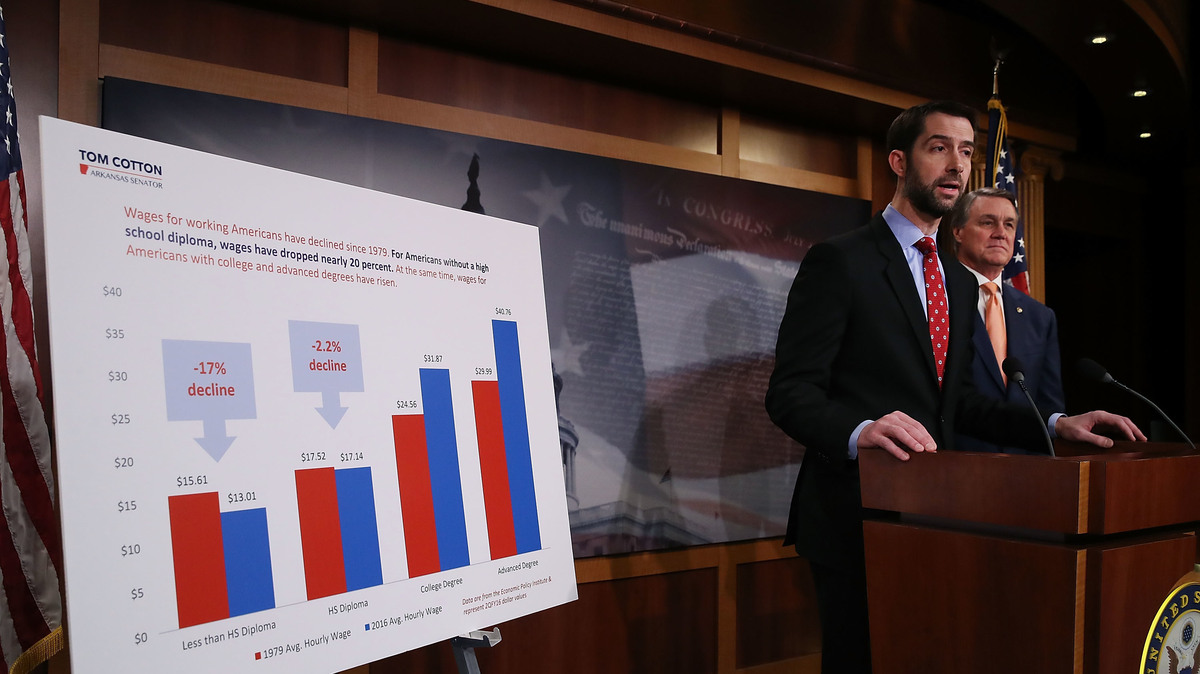 Sens. Tom Cotton, R-Ark., and David Perdue, R-Ga., hold a news conference after unveiling immigration legislation they say is aimed at cutting the number of green cards issued annually by the United States in half.

When he was running for president, Donald Trump pledged to reduce immigration — both the illegal and legal varieties.

His allies in Congress hope to make good on that promise, and two Republican lawmakers have introduced new legislation targeting legal immigration.

The landmark Immigration and Nationality Act of 1965 eased the path across the nation's borders for people from Asia and Africa — parts of the world that previously had limited opportunity to immigrate to the United States.

Today, a new generation of immigration restrictionists thinks it's time to reduce the overall flow. The junior senators from Arkansas and Georgia, Tom Cotton and David Perdue, are proposing a new law.

"The goal here is to get our immigration levels back to historical norms, to take something of a pause to allow the economy to catch up with the immigrants that we have allowed into our country over the last two generations," Cotton says, "and to focus on the well-being of American citizens, those citizens who are here today, many of whom are struggling economically."

Their bill would do three things: First, limit the number of foreign nationals who are able to get green cards to reunite with their families already in the U.S. — currently the largest category of legal immigrants; second, cut the number of refugees in half; third, eliminate the diversity visa lottery — a program that gives visas to countries with low rates of immigration to the United States.

Cotton says the number of green cards awarded each year — about a million — is excessive.

A plan to cut immigration in half faces entrenched opposition among immigration-friendly Republicans, pro-immigrant Democrats, and business lobbies that favors high immigration rates.

But the proposed law has friends in a high place: Cotton says he's been coordinating with the Trump administration and its coterie of longtime anti-immigration figures, including chief strategist Steve Bannon, Attorney General nominee Jeff Sessions, and Julie Kirchner.

Linda Chavez, a conservative political commentator who served in the Reagan White House, says these restrictionist voices are being amplified this year.

"I've been around this issue for 35 years," she says. "We've never seen the kind of reception for these groups that we're seeing in the Trump administration."

The idea that the time has come to invite fewer people from around the globe to become Americans is based on the belief that there are simply too many unskilled immigrants, and that they are competing with low-skilled Americans for jobs.

Economists have done studies for and against this theory, and each side fervently defends its case.

"It would be serious, serious changes to the dynamism of the American economy and the American spirit," says Tamar Jacoby, head of Immigration Works USA, a pro-business group that wants more legal immigrant workers.

The arguments are not all economic — there is a cultural component, the notion that it's time to let the American melting pot cool down for a spell.

In the House of Representatives, Rep. Lamar Smith, R-Texas, expects to propose a companion bill to reduce immigration. He is concerned about immigrant enclaves growing in metropolitan areas.

The bill is the first in a series of GOP measures intended to redesign the American immigration system. Everyone agrees immigration desperately needs fixing, but it remains to be seen if Congress is ready to narrow the gate.