Accessibility links
Book Review: 'The Twenty Days Of Turin,' By Giorgio De Maria Giorgio De Maria's cult novel was first published in Italy in 1977. It's a spooky piece of magical realism that captures a chaotic time in Italian history, starting gently and getting seriously weird. 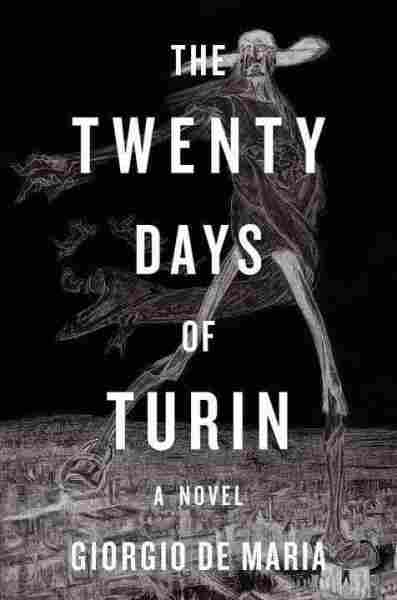 The Twenty Days of Turin

I read it like a memoir. Like autobiography. Which, ideally, is the way it's supposed to be read, I suppose, but is also a dangerous way to let it into your head. The way it will mess with you most fully and inhabit your dreams. The Twenty Days Of Turin is a novel. There's no truth to it at all. But sometimes it doesn't exactly feel that way.

I read it out of its time and place — on my couch, in a bar, on a train in Philadelphia, December of 2016 — which was not how the book was supposed to be read. And yet, here and now, it was remarkably prescient. There was a disquieting commonality between its intended place and moment and the one we find ourselves in now.

Giorgio De Maria's cult novel was published in Italy in 1977, at a time when the country was wracked by constant terror attacks and consequent police state crackdowns and violence. Neighbors distrusted each other. The social and political fabric was unraveling. They called it the "Years Of Lead" and it was fertile ground for The Twenty Days — a spooky, strange piece of Magical Realism prestidigitation that captures, nearly note-for-note, the turmoil and chaos of a community whose center has shattered but is being held together by a willful, communal rejection of the breakage.

In the beginning, there is The Library — a scruffy, frightening collection of people's journals, diaries, screeds and manifestoes, collected by eerily clean and well-scrubbed young men, and held all together in an empty room of a church-run sanitarium. No manuscripts are allowed. No novels. No literature. Only "true, authentic documents reflecting the real spirit of the people." Anyone who wants can go to The Library and read whatever they like. And for a nominal fee, they will be provided with the contact information of any of the authors, should they want to get in contact and have further communication.

No Gibson, no Sterling, no cyberpunk or spec-fic scribbler of the '80s or '90s ever captured the poisoned zeitgeist of social media better than this: a room full of the violent, disgusting, lonely and broken ramblings of shut-ins and social rejects, all held in the abandoned wing of a former insane asylum. That De Maria's version exists as ink-on-paper missives from lonelyhearts and weirdos makes no difference. That he subtitles his story "A report from the end of the century" is just wordplay. Whether he knew it or not, he was writing science fiction.

No Gibson, no Sterling, no cyberpunk or spec-fic scribbler of the '80s or '90s ever captured the poisoned zeitgeist of social media better than this.

The Library is where The Twenty Days begins, with De Maria's narrator, a self-made investigator into the "collective psychosis" of the citizens of Turin following the appearance of The Library and the strange events surrounding it . There was the smell; the vinegary stink that no one could explain. The insomnia which seemed to grip the entire city. The noises — the far-away screaming and the war-cries — that were equally inexplicable.

And then, of course, the murders. Lots of murders. People picked up by the ankles and bashed to pieces against curb stones and the plinths of statues. Bloody, horrific murders, witnessed by blurry-eyed somnambulants whose testimony was too bizarre to believe. The nation heard about it, then the world. Scapegoats were found and imprisoned. The terror seemed to end.

Except ... maybe not. And we follow De Maria's investigator as he talks to some of those witnesses. As he meets with lawyers and survivors, nuns, the mayor and an art critic-cum-parapsychologist who lives like a hermit in the hills above the city, each one of whom is both reluctant to speak — or even think — about the horrors that Turin suffered, but who also just can't stop.

Slowly, things start going sideways. And you hardly notice it at first, but the weirdness (so gentle at the outset, then building to Lovecraftian levels) infects every page until nothing you see seems safe anymore and every word feels suspect. And while to say anything more would put us in serious spoiler territory (yes, for a book that came out almost 40 years ago, but is now being re-released in its first English edition by W.W. Norton and translator Ramon Glazov, who also writes an excellent introduction), it's important to understand that, though fantastical and discordantly strange, this is a book about terror and the deep roots of violent discontent. Everything is symbolic of something else. Nothing is quite what it seems.

But conceived under fire and born into a world shaking itself to pieces, it captures the chaos and randomness of terrorism and the fear of hidden furies in a way that only something that treads the ragged edge of surrealism can. It was a book written for a different world.

And the most disturbing thing about it is how appropriate it is for ours.