Accessibility links
'The LEGO Batman Movie' Drags The Caped Crusader Out Of The Shadows (Again) In The LEGO Batman Movie, the Dark Knight ... lightens up. NPR critic Glen Weldon says it's only the latest example of the character cycling through phases of darkness and light. 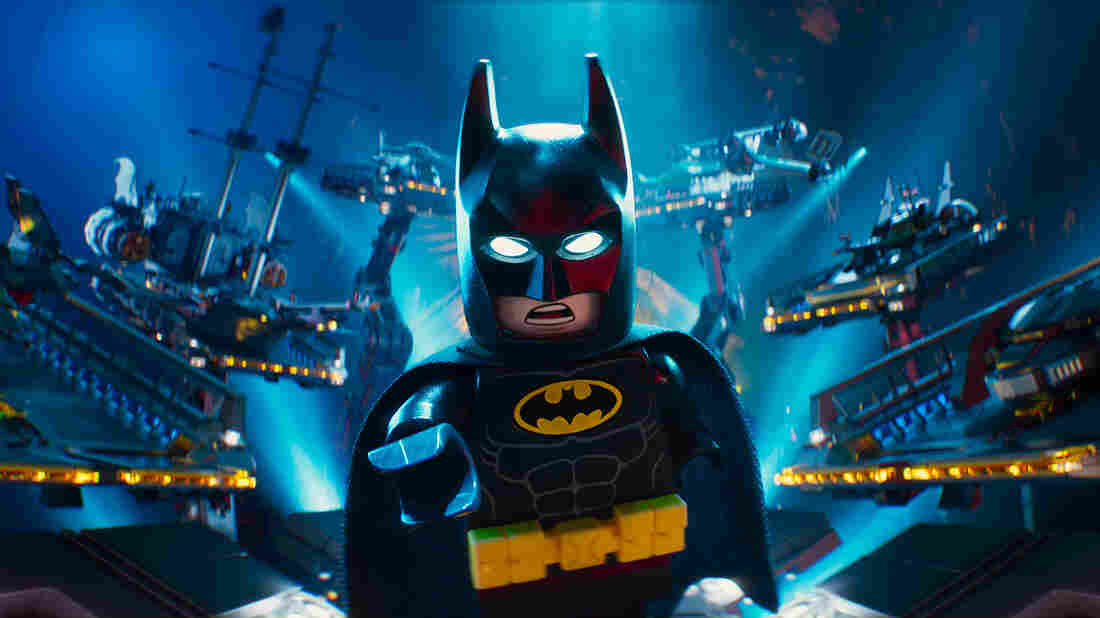 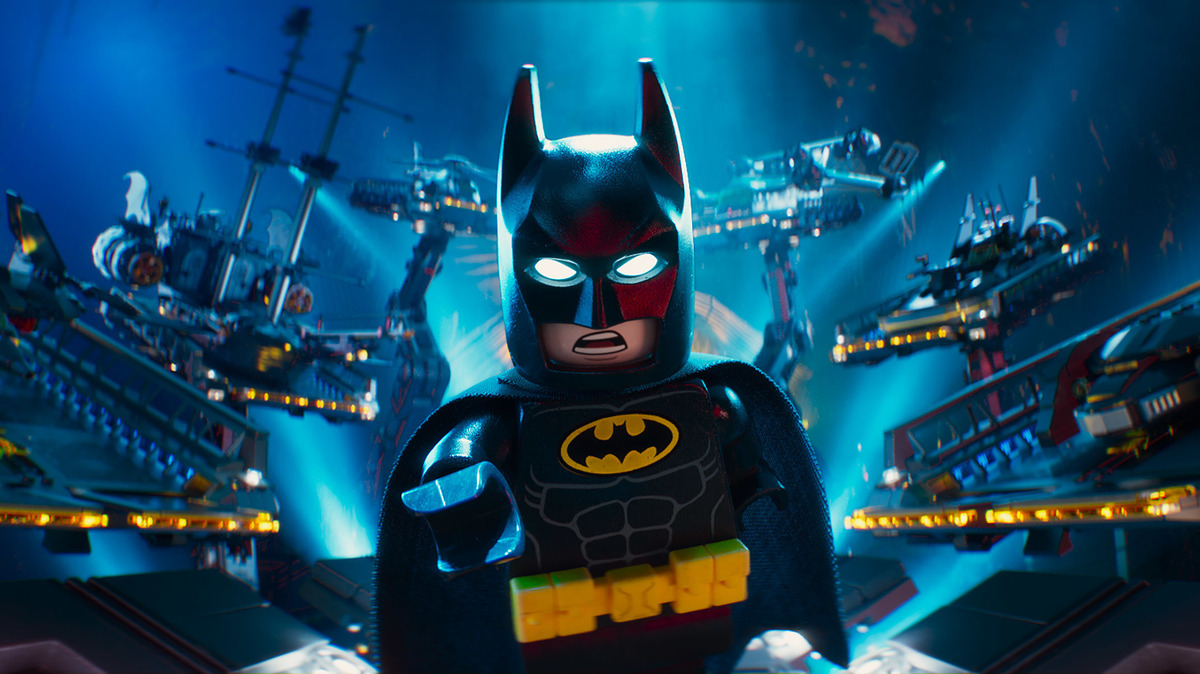 This perpetual cycling through archetypal phases of yin and yang, light slapstick and dour melodrama, is what lends Batman his unique mutability. His fellow heroes are a more stolid lot. They tend to pick a lane and stick with it.

Not Batman. Dude's ephemeral. A veritable will o' the wisp, that guy.

For 78 years we nerds, devout students of his endless adventures, have witnessed him phasing through this dark/light cycle on the comics page. But when it comes to shaping the idea of Batman — how he exists in the public consciousness — it's TV and movies that matter.

And it's possible to see that same cycle at work there, too, if you know where and how to look for it. Every turn of the cycle occurs for a reason, as a reaction to the phase that came before.

The '60s Batman television series starring Adam West brought the Caped Crusader before the eyes of the wider world in a huge way. A huge, goofy way.

The network and studio executives behind the series didn't create the show out of any particular love for the character. In fact, they considered Batman — and superheroes, and comics themselves — to be disposable junk culture. They approached the creation of the series from the outside: producer Bill Dozier read a few Batman comics, and decided to reproduce them exactly — but with a tone that treated them like serious drama, like Ibsen's A Doll's House in tights.

They made him a square, a cop in a cape, a bat-eared representation of the Establishment. He drank milk, lectured Robin about pedestrian safety, and would never think of double-parking the Batmobile. That tone, and the campy silliness it engendered, made the show a sensation, albeit a short-lived one.

Everything about the show's approach angered Batman's hardcore fans, however, and their resentment would live on long after the series went off the air. It was so strong, in fact, that it threw a long shadow from which Batman is only now beginning to emerge.

Throughout the '70s and '80s the Batman of the comics existed as a spirited refutation of everything the '60 TV series had stood for. This new Batman was a brooding loner (Robin had shipped off to college) who haunted the urban night.

It was this Batman that director Tim Burton picked up on, in creating the 1989 Batman film starring Michael Keaton. His Dark Knight was truly dark, and somber, and goth — and also, with respect to to Michelle Pfeiffer's Catwoman — kinda kinky.

When director Joel Schumacher took over the series, he attempted to pull Batman back into the light, although the light in question was neon pink. In homage to the 1960s series, he upped the campy archness, restored Robin to the mix and — in a move that has enshrined him in nerd infamy — slapped some nipples on the sculpted musculature of the Bat-suit.

The reaction of the hardcore Bat-nerds was swift and savage. They took to the nascent internet to demand that future films treat the character as seriously (read: as grimly and grittily) as the comics had been doing for years.

After a brief fallow period, they got their wish.

Director Christopher Nolan's Bat-trilogy, beginning with Batman Begins, seemed like a mission statement for the complete refutation of Schumacher's Batman — and by extension, of the '60s series as well. By leaning into a rugged, gunmetal-gray vision that prized somber practicality over anything that smacked of stylization or — God forbid — flair, Nolan gave the hardcore fans the Batman they loved in the grim-and-gritty comics. This was a Batman who would be taken seriously (read: who was very, very serious). The fans proved fiercely protective: Several critics who dared to suggest that the somberness of Nolan's The Dark Knight Rises, in particular, smacked of bloated pretension were greeted with death threats.

And so we come to The LEGO Batman Movie, which is just the latest attempt to bring the broody Batman out of his cave, into the light and sun of the upper world.

But this attempt is fundamentally different.

The creators of the 1966 TV series brought condescension to Batman. Tim Burton brought a determination to remake the character in his own, emo- outsider image. Schumacher brought camp and areolae. Nolan brought a grayscale dourness.

Every one of them came at the character from the outside, and imposed their vision on top of him.

The screenwriters and director of The LEGO Batman Movie, on the other hand, come at him with 1. a very specific comedic sensibility and 2. a deep, deep, deep knowledge of the character's history that, it turns out, is indistinguishable from love.

Their Batman is something else, as well — something important: a complete tool.

He's a jerk who takes himself far too seriously, a brooding loner who insists, at every opportunity, upon his own consummate awesomeness.

This is not merely a characterization — a "way in" to the character they'd teach in screenwriting classes.

It is a pointed critique of the dour, sulky, militantly humorless Batman that has existed in the public consciousness for nearly 40 years. It is also, more to the point, a slap in the face of the hardcore fanboy culture around him, a culture that insists only one "true" version of the character exists, and stubbornly clings to the conviction that they "own" Batman.

Which is to say: It's a reminder — a not particularly gentle one — that this stuff was always supposed to be fun.

Consider this, as well: The plot of this movie involves Batman learning that being a dark, disaffected, brooding loner isn't enough. He needs to make human connections, needs to let other people in.

In a very real sense, it's about Batman transitioning from an arrested adolescence as a sulky goth, brooding alone in his room, into an adulthood that requires him to join society.

Which is probably why, despite the movie's deep, abiding and aggressive silliness, The LEGO Batman Movie stands as the most emotionally mature Batman film yet made.

It's also one that might — that just might — manage to end the eternal cycle of light/dark Batman, once and for all.

Because no matter how savagely it lampoons the Dark Knight as an egotistical jerk, it so clearly comes from a place of deep knowledge that even the hardest-core fanboy will have no choice but to respect it.

Nolan, Burton, Schumacher, even the creators of the 1960s Batman TV series were outsiders looking in; the team behind LEGO Batman are not. And that matters, because of a very simple, abiding truth first recorded, I believe, by Pliny the Elder, namely:

In other words: I strongly doubt that any self-respecting Bat-fan will be able to gin up much in the way of frothing nerdrage over a film that includes a frickin' Zebra-Man cameo.