Accessibility links
Baylor Sanctioned By Big 12 After New Revelations About Sexual Assault Controversy After filing of another lawsuit against Baylor and the university's disclosure of text messages between coaching staff, the Big 12 reached a "tipping point," a conference official said. 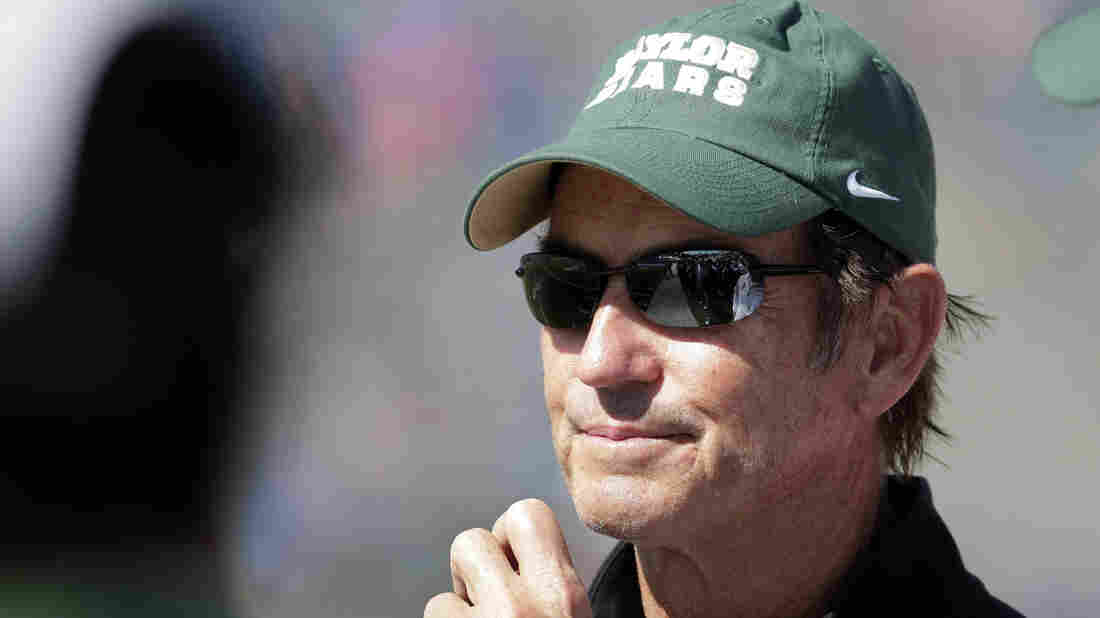 In this Oct. 10, 2015, photo, Baylor head coach Art Briles watches during the second half of an NCAA college football game against Kansas in Lawrence, Kan. Charlie Riedel/AP hide caption 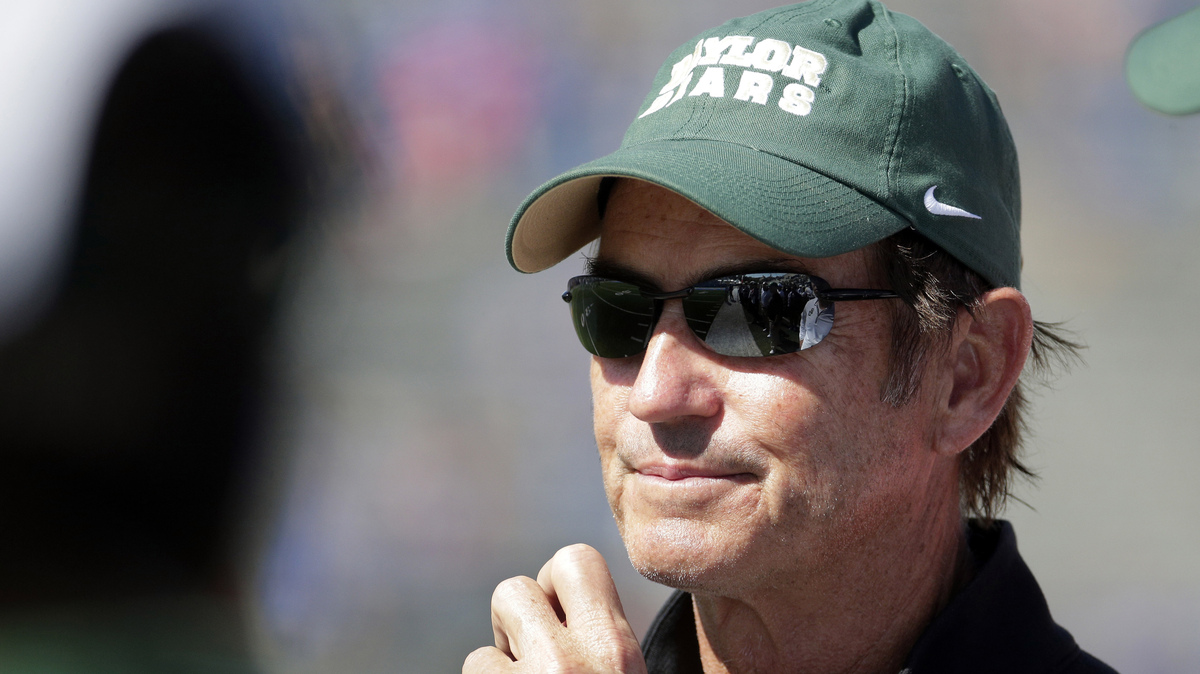 In this Oct. 10, 2015, photo, Baylor head coach Art Briles watches during the second half of an NCAA college football game against Kansas in Lawrence, Kan.

The Big 12 Conference decided Wednesday to impose a multi-million dollar sanction on Baylor University after another recent round of stinging revelations about the extent and nature of the university's problems with alleged sexual assaults by former members of its football team.

The conference's board of directors voted to withhold a quarter of Baylor's future revenue "pending the outcome of third-party verification review of required changes to Baylor's athletics procedures and to institutional governance of its intercollegiate athletics programs, among other matters," according to a post on the conference's website.

"The Board is unified in establishing a process to verify that proper institutional controls are in place and sustainable," the conference board's chairman David Boren said. He added, "By taking these actions the Board desires to ensure that the changes that were promised are actually made and that systems are in place to avoid future problems. The proportional withholding of revenue distribution payments will be in effect until the Board has determined that Baylor is in compliance with Conference bylaws and regulations as well as all components of Title IX."

In response, Baylor's interim president pledged the university's "full cooperation" with the Big 12's requirement of an independent review as the school implements "enhanced practices" to deal with allegations of sexual violence.

"This third-party review at the request of the Big 12 Conference," said David E. Garland, "will provide an opportunity for us to demonstrate our progress to date and our ongoing commitment in establishing Baylor as a leading institution in athletics compliance and governance and for preventing and addressing sexual assaults on college campuses."

The withholding — which amounts to an estimated $7.5 million reduction in annual distributions to Baylor if the sanction remains in effect — is the closest thing to a punishment imposed by either the Big 12 or the NCAA, after allegations that began roughly 5 years ago of sexual assaults committed by football players during the tenure of former head coach Art Briles and efforts by the university to sweep those alleged assaults and other misconduct under the rug.

First reports last year about the university's efforts to cover up allegations against the football team included five Baylor football players and 8 occurrences of sexual assault. Then came a Wall St. Journal article in late October that detailed 17 women reporting sexual or domestic assault involving 19 football players, including four instances of alleged gang rapes. Baylor football player Tevin Elliott was charged, convicted and sentenced to 20 years in prison in January 2014 after four women testified he sexually assaulted them. Another former player, defensive end Sam Ukwuachu, was convicted in August 2015 of sexually assaulting a member of the women's soccer team. Yet another All-American member of the Bears' program, Shawn Oakman, was indicted in July of last year for allegedly sexually assaulting a Baylor graduate student at her apartment. His trial has been set for April.

Crawford resigned last fall, accusing the university of interfering with her ability to do her job.

And then the allegations grew even worse in the past two weeks.

Late last month, a young Baylor graduate filed a lawsuit against the university alleging she was gang raped by two football players in 2013 and that more than 50 instances of rape, perpetrated by as many as 31 football players, occurred between 2011 and 2014 when Briles ran the Baylor football program, the Dallas Morning News reported. The suit describes a culture of sexual violence inside the program and contends that Briles implemented an activity called "show 'em a good time," which included taking underage high school recruits to strip clubs and arranging for escorts to have sex with top prospects. The lawsuit accuses Briles' son, former Baylor assistant coach Kendal Briles, of asking a Dallas prospect: "Do you like white women? Because we have a lot of them at Baylor and they love football players."

Close upon the heels of those new allegations, the university itself threw gasoline on the conflagration. Last Thursday in response to more lawsuits, libel suits filed by Briles and by Briles' assistant coach Colin Shillinglaw, Baylor's regents and interim president described the football program under Briles as "a black hole into which reports of misconduct such as drug use, physical assault, domestic violence, brandishing of guns, indecent exposure and academic fraud disappeared."

And to drive the point home, Baylor made public several text messages between then coach Briles, then assistant coach Colin Shillinglaw and then athletic director Ian McCaw. From the university's court filing:

*On April 8, 2011, after a freshman defensive tackle was cited for illegal consumption of alcohol, Coach Briles sent a text message to an assistant coach: "Hopefully he's under radar enough they won't recognize name – did he get ticket from Baylor police or Waco? ... Just trying to keep him away from our judicial affairs folks...."

*On February 11, 2013, an assistant coach notified Coach Briles of a claim by a female student-athlete that a football player brandished a gun at her. Coach Briles responded by impugning the victim: "what a fool – she reporting to authorities." The assistant coach texted back: "She's acting traumatized ... Trying to talk her calm now..."

*On September 13 2013, Shillinglaw sent a text to Coach Briles about a player who got a massage and "supposedly exposed himself and asked for favors. She [the masseuse] has a lawyer but wants us to handle with discipline and counseling." Briles' first response was "What kind of discipline... She a stripper?"

*On September 20, 2013, after a player was arrested for assault and threatening to kill a non-athlete, a football operations staff official tried to talk the victim out of pressing criminal charges. Meanwhile, Coach Briles texted Athletics Director Ian McCaw: "Just talked to [the player] – he said Waco PD was there – said they were going to keep it quiet – Wasn't a set up deal... I'll get shill(Shillinglaw) to check on Sibley (local attorney Jonathan Sibley)." Athletics Director Ian McCaw replied: "That would be great if they kept it quiet!"

*In October 2013, Shillinglaw and Briles discussed their efforts to intervene on behalf of a player who was suspended for repeated drug violations. "Bottomline, he has to meet with (Vice President for Student Life Kevin) Jackson tomorrow morning. If Jackson does not reinstate President will," Shillinglaw wrote.

The impending release of the messages seemed to have the desired effect — at least when it came to Briles who dropped his contentious suit against the university just 24 hours before the disclosure of the messages in the school's court filing responding to Shillinglaw's ongoing case.

"It's a verification process," Bowlsby also told CBS Sports, "We're holding the money until we can verify that what needs to be done is being done."