Accessibility links
Book Review: 'Autumn,' By Ali Smith Ali Smith kicks off a seasonally-themed quartet with this ultimately uplifting look at the lifelong friendship between a young woman and her unconventional childhood soulmate, an artistic gay man. 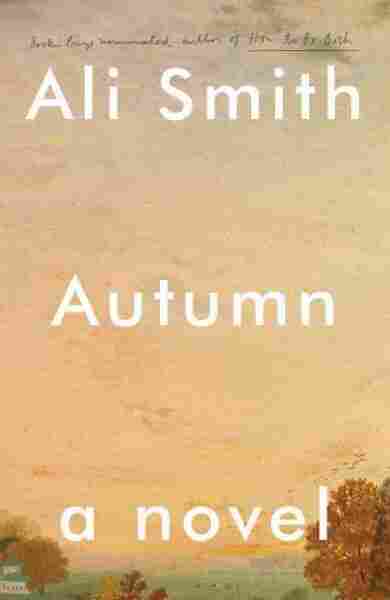 Could Scottish writer Ali Smith be J.D. Salinger's natural heir? It's not as preposterous as it sounds. Not since Salinger's plucky English orphan, Esmé, soothed an American sergeant's no-longer-intact faculties at the end of World War II has a writer so artfully and heartrendingly captured the two-way lifeline between preternaturally wise children (mainly girls) and young-at-heart gentle souls (mainly men) who forge special friendships that have nothing predatory or Lolita-ish about them.

Smith's latest novel, Autumn, is the first of a quartet planned to span the four seasons. Set this past summer and fall in a bitterly divided England during the unsettled, disheartening months following the Brexit vote, its heroine is a plucky 32-year-old art lecturer named Elisabeth Demand who is facing the loss of two things she holds dear: basic human decency, and the elderly neighbor who was her unofficial babysitter and unconventional soulmate in her childhood.

As Daniel Gluck lies sleeping in a nursing home near Elisabeth's mother's village, "the cave of his mouth ... is the threshold to the end of the world as she knows it." She reads A Tale of Two Cities to him, and in his somnolent state Daniel twists Dickens' opening lines to "It was the worst of times, it was the worst of times. Again. That's the thing about things. They fall apart, always have, always will, it's in their nature."

Meanwhile, Elisabeth struggles with these "worst of times." In the village, someone paints GO HOME on an immigrant's house — which leads to the response, "WE ARE ALREADY HOME THANK YOU," along with bouquets of flowers left on the nearby pavement, as if to mark the spot where civility was murdered. "I'm tired of the anger. I'm tired of the meanness. I'm tired of the selfishness ... I'm tired of being made to feel this fearful," Elisabeth's mother rants.

An 'Artful' Approach To Literary Criticism

Flashbacks to Elisabeth's childhood trace the charming arc of "artsy" Daniel's mentorship. He's quick to recognize a kindred spirit in the whip-smart eight-year-old — Elisabeth evokes memories of his brilliant younger sister, who was rounded up by Nazis in Nice in 1943, while he was at school in England. On long walks, he shares his love of art and language, teaching Elisabeth to spin stories and visualize paintings described with words, because "whoever makes up the story makes up the world." They discuss Dylan Thomas, Bob Dylan, Sylvia Plath. Later, Elisabeth's boyfriends have a hard time living up to her Socratic friend. "Nobody spoke like Daniel. Nobody didn't speak like Daniel."

As she also demonstrated in How to be both, Smith has a bead on how mothers and daughters can get under each other's skin, in both good and annoying ways. Adolescent Elisabeth's pushback against her single mother's growing alarm about her "father fixation" and the way she's "always hanging round with an old gay man" provide a good foil to her generally delightful, but sometimes didactic or even twee dialogues with Daniel. But in 2016, as summer fades to fall and Elisabeth spends more time at home than she has in years in order to visit her dying friend, she comes to recognize sides of her mother — wit, gumption, a surprising private life — she failed to credit in her youth.

While less structurally complex than How to be both and less playfully pun-filled than There but for the, Autumn again knits together an astonishing array of seemingly disparate subjects, including mortality, unconventional love, Shakespeare's Tempest, a rhyming advertisement jingle, and the xenophobia underlying both Nazism and current populist neo-nationalism. Some components, like Christine Keeler and the Profumo affair, fail to resonate, particularly for American readers. But generally, Smith is better at making tight connections than most airlines.

Autumn, like How to be both, involves a real-life artist – British Pop Art bombshell Pauline Boty — as a vital intergenerational link between her two main characters. Smith's take on Boty's tragically truncated life exemplifies her attitude toward the importance of art and literature in coping with the bad things that happen to good people: Boty, she explains, was a "free spirit ... equipped with the skill and the vision capable of blasting the tragic stuff that happens to us all into space, where it dissolves away to nothing whenever you pay any attention to the lifeforce in her pictures."

Free spirits and the lifeforce of art — along with kindness, hope, and a readiness "to be above and beyond the foul even when we're up to our eyes in it" — are, when you get down to it, what Smith champions in this stirring novel.