Accessibility links
'John Wick: Chapter 2' Lives Its Life Like A Candle In A Hail Of Bullets This kinetically shot and stylishly art-directed sequel "walks right up to the edge of parody, and then judo-throws a fool over the side," says critic Chris Klimek. 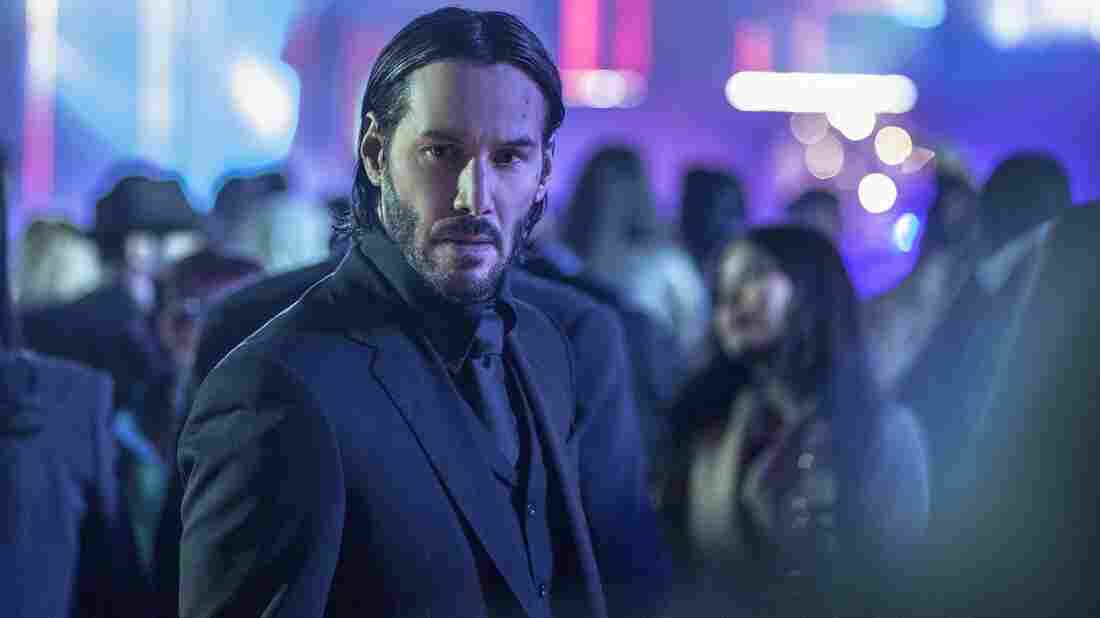 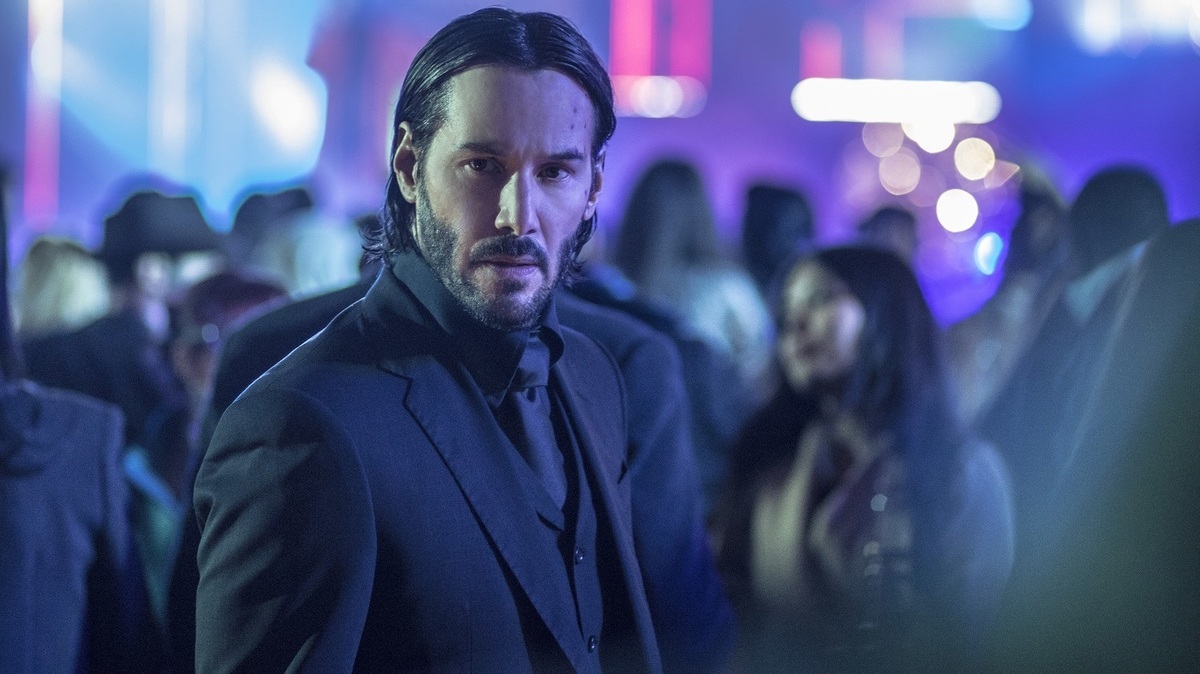 Thomas Jefferson believed cities bred sin and corruption, and John Wick: Chapter 2 offers persuasive if hallucinatory evidence that Jefferson was onto something. In Manhattan, in Jersey, in Rome, and in, um, Brooklyn, every tourist and beggar and barista and concert violinist is a potential assassin just waiting for the order to clip you in the most ostentatiously art-directed way possible. By the time Wick has snuffed out a few dozen nobodies (plus the rapper/actor Common), and the field has thinned to just him versus Ruby Rose as a mute assassin who communicates in sign language ...

... and Riccardo Scamarcio as a flamboyant Italian gangster ...

... in a neon-and-mirrors art installation called "Reflections of the Soul" ...

... you might think you're watching the face-shooting revenge flick Frederico Fellini never got to make.

Okay, no, that's absurd. It's quite good, though.

Our guy is pretty bad. In the critically adored sleeper John Wick, Keanu Reeves renewed his man-of-action credentials playing an assassin of legend who gets dragged out of retirement by the theft of his immaculate '69 Mustang and the slaughter of his beagle. The puppy was a gift from his very late wife, for whom he had, at great cost, gone straight. That's why he had absolutely no choice but to snuff out 84 human souls: to balance the cosmic scales for grand theft auto and first-degree caninicide. You or I would've done the same thing in his Salvatore Ferragamo calfskin lace-ups.

If he was serious about getting out of the game, he probably would've moved a little farther away from his old Russian mob boss than just across the Hudson. But John Wick dealt in lead, friend — and in kinetic abstraction, not naturalism. It was a cheap movie that looked expensive. It was a smart movie that knew exactly when to play dumb. It let us piece together the rules of its weird economy of life-taking, instead of ponderously explaining every damn thing. There was something inexplicably, irreducibly zen about its mass-casualty minimalism. It was a gift.

Even more than its predecessor, Chapter 2 feels like the Art Basel special edition of Guns & Ammo. It inverts the shape of a lot of franchise entries, and the James Bond pictures in particular, in that it starts off weak but gets stronger and stranger and ends just when it should. Picking up soon after the events of its precursor, Chapter 2's Act 1 is a minor amusement, a parade of cameos and callbacks to a movie barely more than two years old. But things improve fast once Scarmacio's character hears that Wick has renounced his renunciation of violence and immediately calls in a marker, dispatching Wick to Rome to rub out his sister.

Wick checks into the ancient city's branch of The Continential — the five-star assassin's lodge we learned about in the first movie (imagine the TripAdvisor reviews!) — and makes preparations for his deadly errand, seeing the "sommelier" about some "Austrian varietals." (Smoky bouquet, coppery finish.) He even has a tailor sew him two bullet-resistant suits, equipment more practical than 90 percent of the gizmos 007 ever got. Luca Mosca designed the costumes, which flatter Reeves' regal frame especially.

Like the sets and the clothes, the violence possesses the same formalist rigor it did in the first film; this time out, there's a lot more of it. Director Chad Stahelski — a veteran stuntman and second-unit director who graduated to the first chair with Chapter 1 — is back, although his co-director on the original, David Leitch, is not. (Leitch is signed for the sequel to Deadpool.) Stahelski was one of Reeves' stunt doubles on The Matrix nearly 20 years ago. Even more than in that landmark picture, Reeves appears to do his own fighting and driving and tumbling here, and Stahelski lets us see all that fine, meticulous work in long takes and medium shots.

Reeves was 51 during production, but he still moves with elegance and precision. Watching him bowl through adversaries in graceful flurries of "gun fu" — Stahelski & Co.'s proprietary mashup of close-quarters gunfighting, judo throws, jiu-jitsu holds, and the odd pencil-stabbing — is pleasurable in the same way that watching a great athlete or a world-class dancer is pleasurable. The production notes and making-of shorts insist it's all him, and it sure looks like him, but who can say for certain anymore? Common, playing the bodyguard of Wick's target, brings an impressive physicality, too. He's been in a dozen mediocre-to-crummy action pictures (also Selma), but he's finally graduated to a top-grade one.

Screenwriter Derek Kolstad, who got his big break with the first film, speaks directly to the audience a little more this time, and that's a drag. It's unlikely Wick would need to have the rules of the Continental read out to him again, or that he wouldn't know that the magazine capacity of a Colt 1911 .45 — one of the most famous handguns ever made — is seven rounds. (That last bit comes courtesy of a nice piece of stunt casting that the movie's trailers spoiled, but I won't.)

But these are nitpicks. We're here for the arty arterial spray. When Stahelski cross-cuts between three different attempts on Wick's life occurring at different points during the same lousy evening, or when he gets some physical comedy out of Reeves and Common taking silenced potshots at one another across an atrium with none of the bystanders around them the wiser, Stahelski makes good on all his promises. He walks right up to the edge of parody, and then judo-throws a fool over the side.

During that hall-of-mirrors finale, a recorded announcement playing on a loop intones that the exhibit aims to "lead you into a deeper reflection on the nature of self." It's like Nietzsche said: When you shoot into the abyss, the abyss returns fire.