Accessibility links
Review: Alison Krauss, 'Windy City' Krauss' first solo album since 1999 shows off her intelligence and good humor in versions of classic songs that are delightfully down to earth.

Hear The Yet-To-Be Released Album In Its Entirety 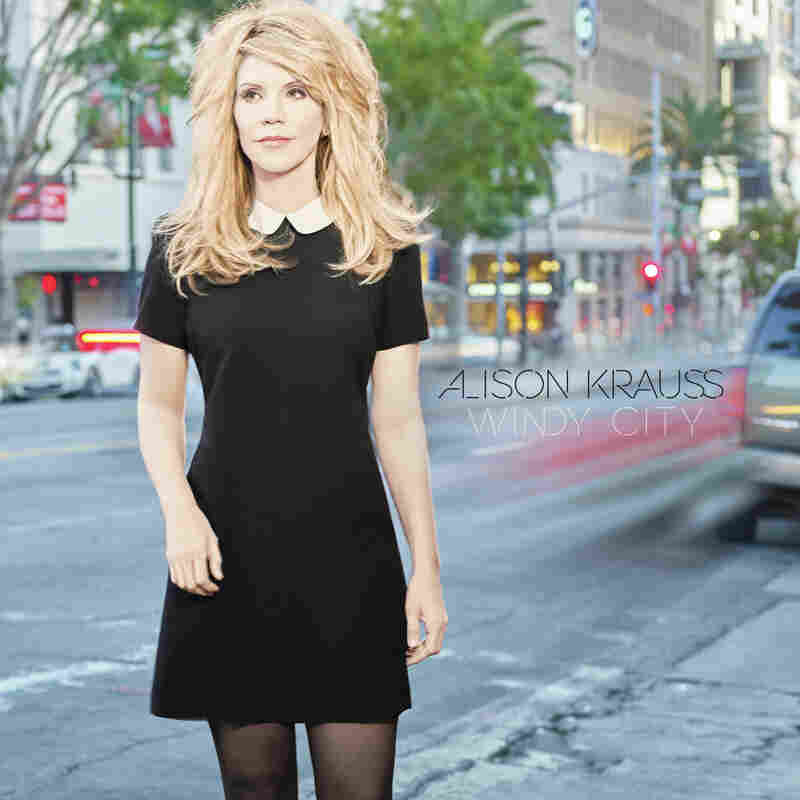 Alison Krauss' voice can seem like an entity unto itself: a holy spirit wafting through the pop world, melting away musical categories. Of course, that's not what it is at all. It is the instrument of an astute musician who began pursuing her craft in bluegrass as a child and who's logged in hours of work learning that genre as well as country, folk and pop. Krauss is not some kind of angel – she's a real woman, a master of in-studio collaboration, and one of the finest players, on fiddle, in her field. Windy City (out Feb. 17), Krauss's first solo album since 1999's adult-contemporary oriented Forget About It, shows off her intelligence and good humor in versions of classic songs that are delightfully down to earth.

The vehicle is country music – not the misty mountain folk sound she invented in the early 2000s with the help of producer T-Bone Burnett and vocal co-conspirator Robert Plant, and not the refined bluegrass experimentalism she perfected with her longtime band, Union Station. Instead, Krauss turned to stalwart Nashville producer Buddy Cannon, who's been working similar miracles with Willie Nelson on that legend's past several albums. Cannon helped Krauss choose songs representing country's practical eclecticism: "All Alone Am I," the highly emotional "rockaballad" Brenda Lee made famous in 1963; John Hartford's "Gentle On My Mind," made famous in 1968 by Glen Campbell in a performance that presaged the rise of soft rock; "Poison Love," the sturdy Elmer Laird singalong that's served bluegrass, rockabilly, classic country and new revivalist interpreters alike. Krauss honors her bluegrass origins with several songs associated with the genre's beloved risk takers the Osborne Brothers, including the poignant title track. She also gives a subtle reading to Willie Nelson's lovely and sometimes overlooked meditation on loss, "I Never Cared for You."

Cannon and Krauss create a sonic atmosphere in which these songs can breathe and feel fleshy. Members of Union Station, including banjo player Ron Block and bassist Barry Bales, play alongside Nashville country-rock legends like guitarist Richard Bennett and drummer Chad Cromwell. Krauss, who finds her peace in the perfect vocal blend, invited an all-star cast to harmonize with her on these tracks: honky-tonk heroes Hank Williams, Jr., and Jamey Johnson, bluegrass standard-bearers Sidney and Suzanne Cox, her longtime collaborator Dan Tyminski, Cannon's daughter Melonie. The feel of these tracks is highly professional but loose: pros romping through their repertoire, with Krauss making each song charmingly personal.

The highlight of the set may change for listeners depending on mood: quiet or rowdy. One standout, however, is also among the album's most unexpected inclusions. "River in the Rain" was written by the great raconteur Roger Miller for a mid-'80s Broadway musical based on Huck Finn's adventures called Big River. Krauss transforms this duet between Huck and his enslaved companion, Jim, into a hymn that somehow both contains and expands beyond its historical context: in her hands, it's a love song, a hymn, a submersion in the essence of longing. "River in the Rain" epitomizes what has made Alison Krauss such a beloved figure across musical genres: hers is that spirit that settles into your heart and becomes a boon companion to all the sadness and hope that's in there.