Accessibility links
50 Years Later, The Biting Satire Of 'The Smothers Brothers' Still Resonates Before SNL and The Daily Show, The Smothers Brothers Comedy Hour mixed entertainment and advocacy in a way that influenced a generation of satirical political shows. Critic David Bianculli looks back. 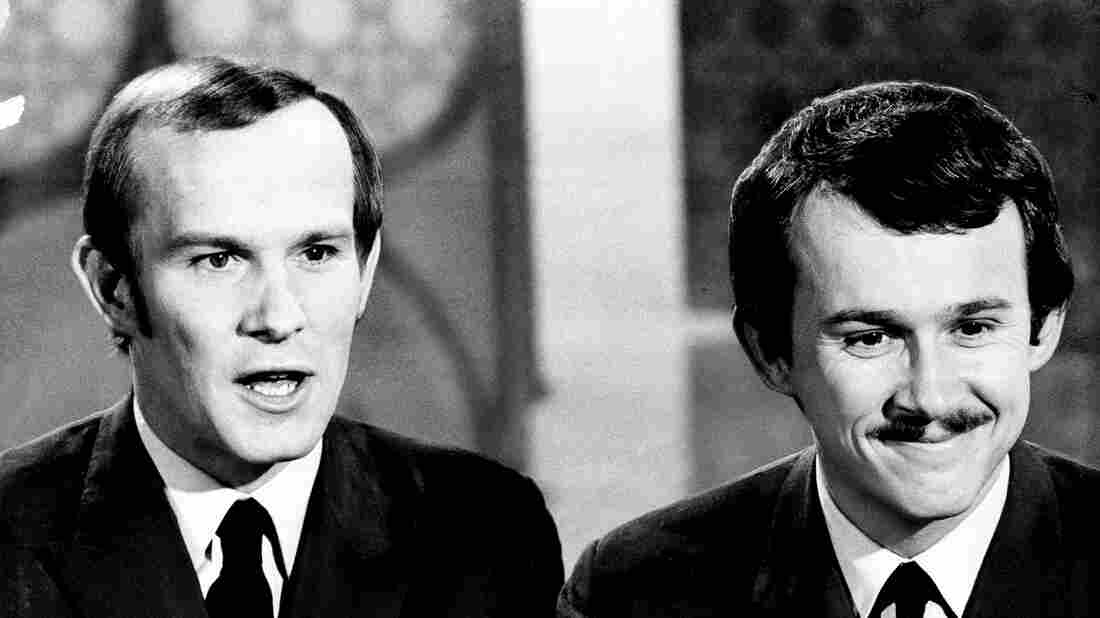 Tom and Dick Smothers battled with CBS censors over the content of The Smothers Brothers Comedy Hour. AP hide caption 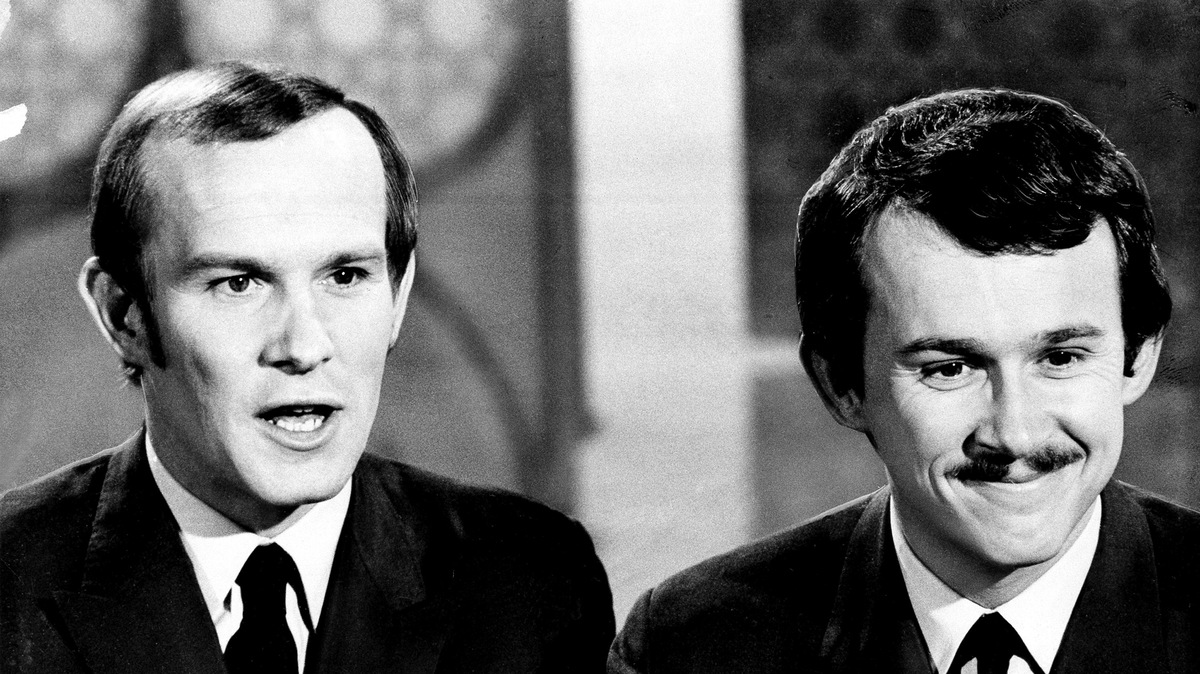 Tom and Dick Smothers battled with CBS censors over the content of The Smothers Brothers Comedy Hour.

Tom and Dick Smothers came to CBS in 1967 not really intending to lead or support a revolution. They just got caught up in it — and they happened to have a network program, with some 30 million viewers, on which they criticized the war in Vietnam, celebrated rock 'n' roll music and satirized politics and politicians.

The Smothers Brothers Comedy Hour, which premiered 50 years ago this week, got its message out slowly and sometimes sneakily at first. A lot of it came through the music and the hot new acts booked to perform on air. Over the run of the show, it was like a series of anthems from the counterculture — from Buffalo Springfield singing "For What It's Worth" to the Beatles singing "Revolution" — with the American TV debut of The Who, and the West Coast cast of Hair, and Dion singing a song about assassinated heroes in between.

The Beatles didn't appear live to sing "Hey Jude" and "Revolution." They'd gotten disinterested in touring by 1968, so they made these new things called videos, and gave them to only one TV program in the United States. Not to The Ed Sullivan Show, which had helped launch Beatlemania and the British invasion four years before — but to the Smothers Brothers.

That same year, George Harrison of the Beatles showed up unannounced — not to sing, but to support Tom and Dick in their fight against the CBS censors. By then, the fights had become almost legendary. Tom confessed to Harrison that on American television, they didn't always get the chance to say what they wanted to say, and Harrison advised, "Whether you can say it or not, keep trying to say it."

At first, the censored bits were silly, like an Elaine May sketch about, ironically, censorship. But quickly, the jokes became political, and battle lines were drawn. CBS was like a stern parent, placing more and more restrictions on a rebellious teenager — and Tom, especially, got more rebellious. He and brother Dick and the rest, including head writer Mason Williams (who unveiled his hit instrumental "Classical Gas" on the show), put more meat and meaning into the program — or tried to.

A skit poking fun at LBJ got the president to call CBS Chairman William Paley in the middle of the night to complain — which, in turn, led to Paley asking the show to ease up on its presidential satire. In return, Paley agreed to break the 17-year blacklist on folksinger Pete Seeger, who appeared in 1967 to sing, as part of an anti-war medley, a new song he'd written called "Waist Deep in the Big Muddy," an obvious allegory about the Vietnam War and Johnson himself.

CBS cut the song, Tom went to the press to complain — and the following year, in a triumphant performance, Seeger was asked back. It was during this appearance that he was allowed to sing his song about soldiers trying to ford an unexpectedly deep river.

Other segments produced for the show never saw the light of day — or, at least, the prime time of night. For its first show after the violence-filled 1968 Democratic National Convention, Comedy Hour had Harry Belafonte sing a medley of calypso songs, with reworked lyrics to reflect the disarray and dissent in America — while news footage of police brutality and student protests was projected behind him.

'The Uncensored Story' Of The Smothers Brothers

That never made it to air. Nor did a comic sermonette by comedian David Steinberg, whose mortal sin, to CBS, was making fun of religion at all. His first sermon got more negative mail than anything in the history of TV up to that point. When Tom asked him back, CBS ordered there be no sermon. Steinberg delivered one anyway — about Jonah and the whale.

Not only was that sketch cut, but the entire show was pulled from the air — and shortly thereafter, the Smothers Brothers were fired. They took CBS to court for breach of contract and eventually won a settlement close to $1 million, but they lost their platform.

The Comedy Hour lasted into the early months of the Nixon administration, which were prefaced by the brothers' on-air promise, in a tongue-in-cheek manner, to "lay off the jokes" toward the president-elect ... at least for a while.

On their final show, Dick read a letter he and Tom had gotten from former President Johnson. These days, President Trump responds to Saturday Night Live skits with angry tweets. Back then, Johnson, reflecting on his treatment by the Smothers Brothers, responded by writing:

"It is part of the price of leadership of this great and free nation to be the target of clever satirists. You have given the gift of laughter to our people. May we never grow so somber or self-important that we fail to appreciate the humor in our lives."

Happy anniversary, Smothers Brothers Comedy Hour, and thanks for everything.