Accessibility links
John Oliver On Facts, Donald Trump And The Supreme Court For Dogs In an NPR interview, the comedian talks about why facts matter more to him as a comedian than the president he's about to lampoon. Oliver's Last Week Tonight returns for a new season on HBO Sunday. 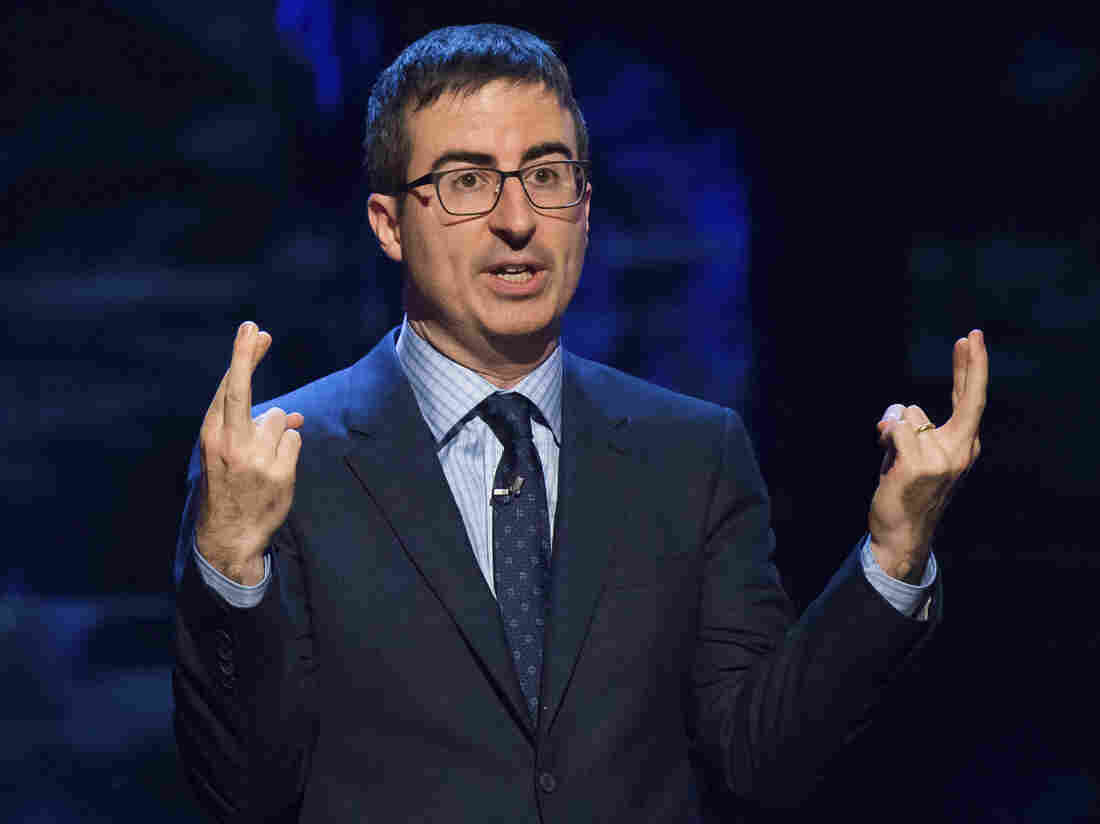 John Oliver speaks at Comedy Central's "Night of Too Many Stars: America Comes Together for Autism Programs" in New York in 2015. Charles Sykes/AP hide caption 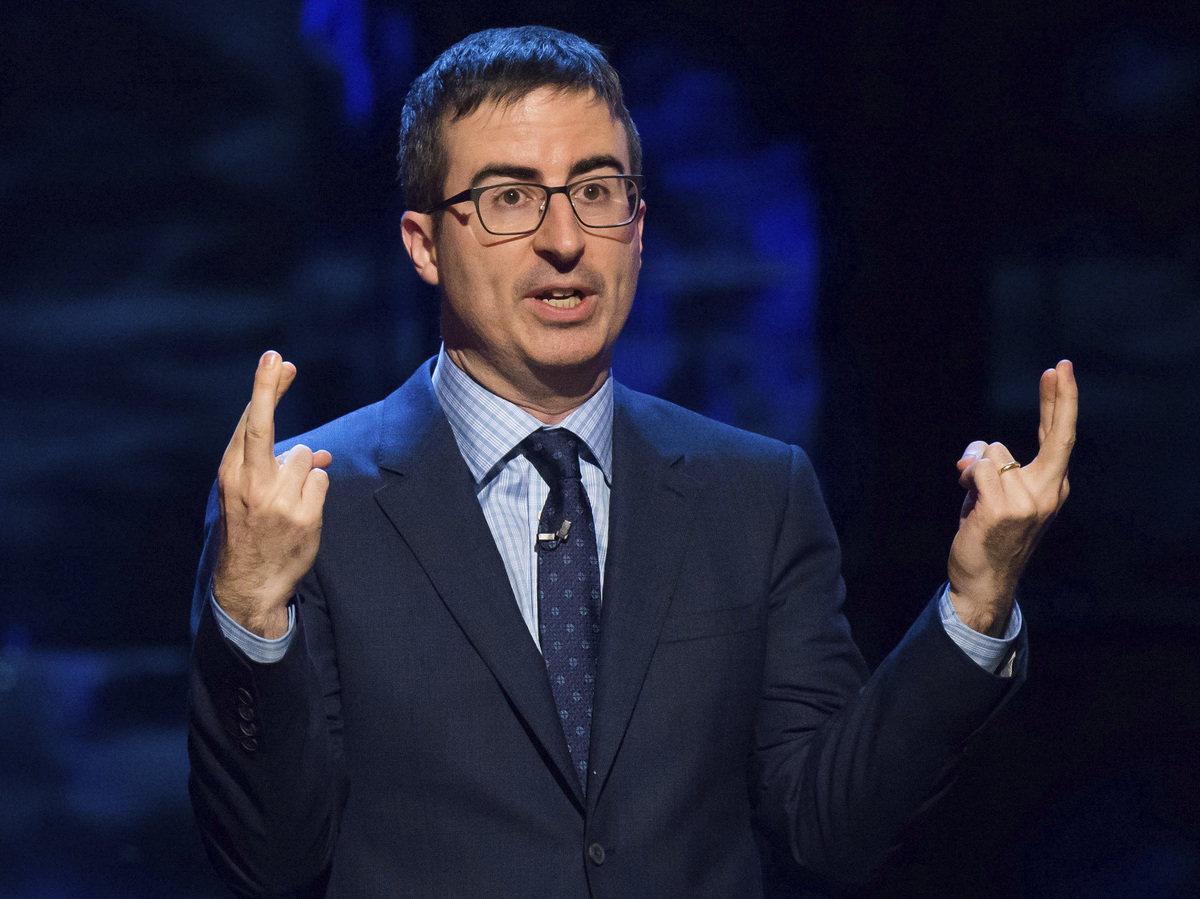 John Oliver speaks at Comedy Central's "Night of Too Many Stars: America Comes Together for Autism Programs" in New York in 2015.

When last spotted in his indigenous habitat, John Oliver was sharing his perception of 2016 and what was to come: a dystopian hellscape.

The 39-year-old British comedian is host of HBO's award-winning Last Week Tonight, and he embarks on a new season on Sunday night after a three-month layoff.

In an interview with NPR, Oliver reluctantly concedes that President Trump will define the shows this season. Oliver carries a distinctly liberal sense of humor and a distinctly serious sense of purpose about his satire in an age when politics, journalism and entertainment have often not just blurred definitions but have swapped numbers, apartment keys and Netflix passwords.

Which leads him to such topics as opioid abuse, sketchy credit report company practices, pharmaceutical pricing, school segregation, Brexit, corruption in international soccer. "If you described that, you wouldn't watch it," Oliver says. " 'Look, here's 20 minutes on civil forfeiture.' That's a hard pass for me."

Oliver says he's trying to make comedy out of worthwhile subjects, generally apart from the politics in play. "We want to look at the issue and its components first, and then much later on, maybe cast an eye on the politics attached to that issue," he says.

In the interview, Oliver talks about the "alchemy" that occurs when he knits together the work of his comedy writers and his researchers (drawn from such journalistic outfits as The New Yorker magazine and the investigative site ProPublica); why facts matter more to him as a comedian than the president he's about to lampoon; the importance of Jon Stewart to his career ("the L. Ron Hubbard to my Tom Cruise"); and what truly gives him joy on the air.

There are some things that will always be funny. Teenagers falling off skateboards: funny. Nut shots: funny. Breaking wind: funny. The world cannot change those. Those three things are columns upon which humor is built. ...

When I heard that Hitler had problems with flatulence, it's funny. Does that make him a funny man? No. It means he had funny moments when his rear end was speaking louder than his mouth. Now in terms of what is funny in terms of politics, that is a much more complicated question. ... Sure, that's going to be my world for the rest of this year.

On facts and Trump

That is what we're wrestling with at the moment [with President Trump], right? It feels interminable to kind of talk about in theory other than to say we're trying, we'll give it a go, and we'll see. It affects everything. ...

[There] is a long, revolting history of politicians wanting to use facts in a misleading way, or in the best way to advance their agenda. This I think is different. This isn't just misleading, this is turbocharged. And the thing I'm much more concerned about is his sweeping dismissal of the press, which is not us, right? It's not comedy. ... Because the media is a very convenient scapegoat at the best of times. But it is going to need to be rigorously defended because we are about to need it more than we have done in quite a long time.

On what works for the show

We generally traffic in things that are not immediately funny, right? We will bring a joke to something. So lots of the stories that we have focused on are not funny at the first, second, or 34th glance. Really, you know, whether it's like chicken farmers or encryption or multilevel marketing — these are not immediately funny stories. Our job is to make them funny. ... When we feel we're doing what do what we do best, it's highlighting stories that perhaps are under-covered or have been under-reported and where we can show people things they haven't seen before. ...

One of the things that we looked at last year was the fiduciary rule in retirement savings, which, again, sounds like not a half an hour of television that you would be anxious to fall over yourself to watch. ... Lots of the issues that we're most attracted to are relatively timeless, right? They're not necessarily issues that have been thrown up that week. And the problem with the electoral process being so long is that everything is presented as being a binary choice between two political parties. And that's obviously absurd. But issues are far more complicated and there's often much more overlap between two sides that could occasionally be diametrically opposed.

On why Oliver delayed satirizing Trump in the 2016 election cycle

The problem is it's all-consuming. A presidential campaign sucks all the oxygen out of people's attention span. And there was a lot more interesting things happening than presidential politics in 2014. ... We didn't want to get sucked into just reacting to what people were lazily talking about on the television because it was easy — the horse race. So the Sunday before Super Tuesday we wanted to make the case that if Donald Trump wins Super Tuesday, history points to the fact he will be the Republican candidate, at which point he is a significant political figure. We need to reckon with that. ...

On why his comedy fails without reporting

[It's] like alchemy. That's the ingredients with which we make this show. ... At its best, you're taking depth of research and then writers who can find a way to articulate that immensely complicated information in a funny, palatable way. ...

We rigorously fact-check absolutely every single thing in the show. Not just the things that you see over my shoulder, not just any statistic that you see in a clip on screen, but, you know, we independently fact-check everything that appears as a fact.

So if there is someone saying on TV, "I was screwed over by a car loan company because I signed this loan," we will speak to the local news source to say, "Does the person have documentation for that? Did you get it? If they don't, or they don't know, we will try and find that person and if we can't back it up we won't use it. So we are we are fact-checking so deeply, down the process — way more deeply than anybody needs to care about, other than the fact that it matters to me, and to all of us that we do it because you can't build jokes on sand or they collapse. ...

I started doing stand-up in college and writing comedy and I loved it. And then at some point I wanted to start blending what I really cared about and what I loved doing the most. And so that was politics — not necessarily in the party politics sense of the word.

One of the people I admired most in the world at that point was Jon Stewart. And so he was the gold standard in my head of what you could do with comedy about the news. ... There was a lot of horrendous versions of The Daily Show in England, but not resembling what he was doing in terms of ... quality.

And so to get hired by him was kind of to be hired by like some version of a hero or a mentor. ... I kind of learned at his feet. He is the L. Ron Hubbard to my Tom Cruise — let me immediately retract that comparison.

On being called boring by Trump

By any rational metric, I am boring. [He claimed] we invited him multiple times to be a guest on our show and he would never appear on our very boring, very low-rated show and the second half of that is an opinion. Again, I'll probably agree more than I disagree with him there. But the first half is just demonstrably a lie. And I think even in one of our stories last year, we tried to articulate just how confusing it is to be on the receiving end of a lie that confident, because he seemed absolutely sure. And I was as sure that I had never invited him. But then I wanted to check. ... It was just a totally empty lie which doesn't matter at all, except for the fact that person with the tendency, the tenacity and the confidence to make that lie is now leader of the free world and has the ability to lie about things that matter a lot more than appearing as a guest on someone's very boring, very low-rated show.

On what brings him joy

The most joyful our show ever gets I think is when we traffic in platinum-grade stupidity. So whenever we're able to waste HBO's resources to a borderline shameful extent, that is where we're really happy. ... Building an entire scaled-down Supreme Court for dogs, that made me so happy that so many adults with real talent and applying real time to that decided to build this for no reason other than the fact that we thought it was funny. And ... that set was so beautiful — I can't tell you how intricate and beautiful it was and how long it took to get each dog in the outfit and get the fake paws out. And it was so funny. So I guess at its root that is where we are the happiest: whenever we do something so magnificently silly that you can't quite believe you're getting away with it.

John Oliver Is No One's Friend On His New HBO Show

WATCH: As SNL Takes On Trump's Team, Sean Spicer Gets His Roast

Where Jokes Go To Die, And Other Observations From Comic John Oliver