Accessibility links
5 Things On Michael Flynn, Russia And Donald Trump Political pressure is building on the White House after reports about National Security Adviser Michael Flynn's contact with Russia. Here's what you need to know. 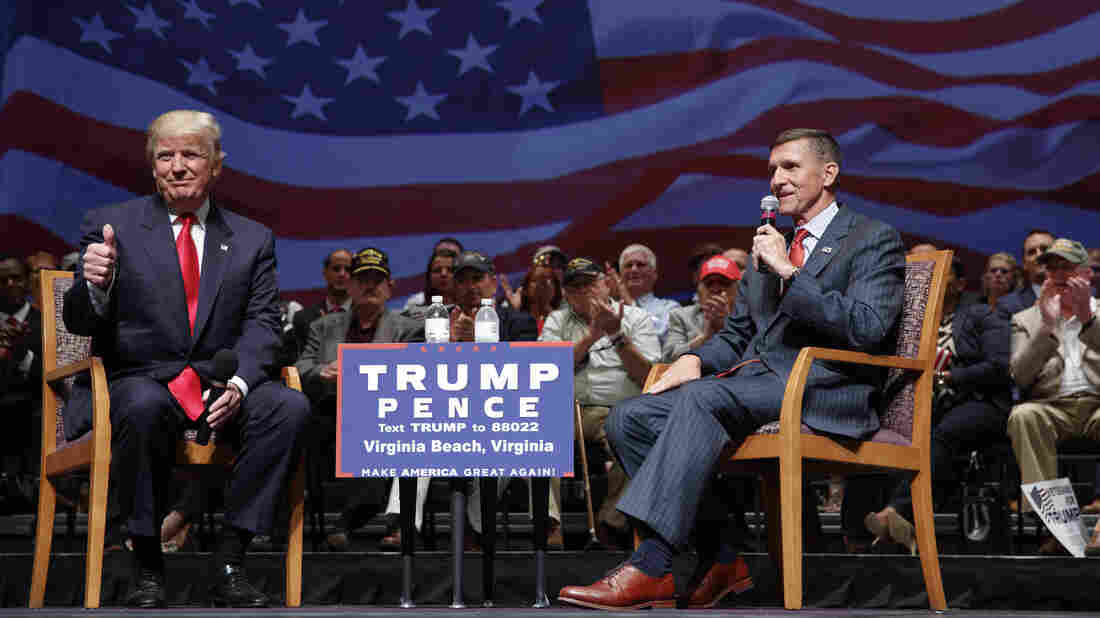 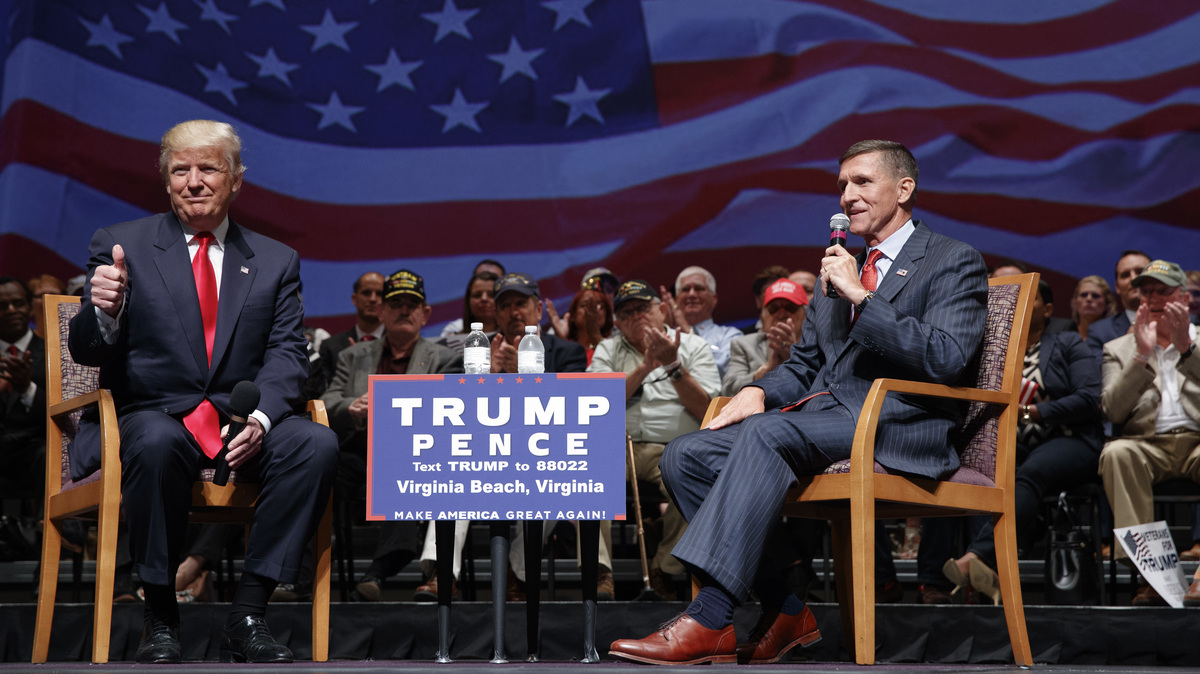 Then-presidential candidate Donald Trump gives a thumbs up as he speaks with retired Lt. Gen. Michael Flynn during a September 2016 town hall in Virginia Beach, Va.

President Trump and his top aides can't seem to shake the Russian bear that follows them around.

It put its paw on the scales of the U.S. presidential election last year, according to the U.S. intelligence community. It cost Trump his then-campaign manager, Paul Manafort. And now the connections between Trump's camp and Moscow might mean that another top aide, National Security Adviser Michael Flynn, could be sent off to Siberia — metaphorically.

The top Democrat on the House Intelligence Committee, Adam Schiff of California, said Friday that if reports are accurate about Flynn's contact with Russia's ambassador ahead of sanctions imposed by President Barack Obama late last year, "he should no longer serve in this administration or any other."

If more Democrats — or, critically, Republicans — join Schiff in calling for Flynn to step down, Trump could have the first big staff crisis of his new presidency.

How did we get here? What might happen next? Here are the five things you need to know about the unfolding imbroglio over Trump, Flynn and the Kremlin.

The story begins before the Trump administration even took office, as the outgoing Obama administration was wrapping up a last bit of ugly and difficult business. Russian President Vladimir Putin had ordered his intelligence agencies to wreak havoc in the U.S. presidential race, America's top spies concluded. They did so by hacking into the email accounts of Democratic and former national security leaders and releasing what they stole.

With the investigation concluded and the case made in public, Obama was under pressure to retaliate. He did so by expelling some Russian spies operating under diplomatic cover, closing sites they were using outside Washington and New York, and imposing economic sanctions on Russia's military intelligence agency, the GRU; another spy service, the FSB; and their top leaders.

Meanwhile Trump, Flynn and then-Vice President-elect Mike Pence and the administration in waiting were getting ready for the inauguration and their own assumption of responsibility. On Christmas Day, before Obama announced his punitive measures against Russia, Flynn communicated with Russia's ambassador to the U.S., Sergey Kislyak. That they talked is not in dispute. The issue is what they said. The Washington Post reported on Thursday that their discussions included, if not a warning by Flynn about the pending new sanctions, a promise that whatever Obama did, Trump could undo once he was in office.

If Flynn was negotiating with the Russians on behalf of an administration not yet in power, that could technically be against the law — though it's a law no one has ever been prosecuted for breaking, the Logan Act. The conversations also expose the Trump administration to more charges about secret collusion with Moscow.

A spokesman for Flynn told the Post that he didn't remember all of what was discussed and that it's possible sanctions might have come up. But on Jan. 15 Pence said categorically on CBS's Face the Nation that Flynn and Kislyak did not talk about sanctions.

One of the oldest saws in Washington runs like this: "The cover-up is worse than the crime." A senior administration official told NPR on Friday that Pence's comments on Face the Nation were based entirely on the vice president's discussion with Flynn — in other words, that Flynn owns the substance of what the White House said publicly in explaining his contact with the Russian ambassador.

America's intelligence services monitor the communications of foreign agents, and the detail about Flynn's communication with Kislyak was reported (also in the Post) even before Trump took office. The Trump transition team said Flynn had only wished the ambassador Merry Christmas. Then the Trump camp said the two were making staff-level arrangements for a phone call between Trump and Putin. The Trump team talked about an invitation from Moscow for the U.S. to join Russian-led peace talks about the war in Syria. The timing of the conversations, as Pence explained on television on Jan. 15, was "strictly coincidental."

Now Flynn has said they may have talked about sanctions, but he doesn't remember, and Pence is taking himself out of it, saying all of this is on Flynn. What also isn't clear is what Trump might have known or when he knew it. Did Trump order that these conversations take place? Or was Flynn acting on his own?

What hard evidence exists about any of this? The Washington Post and New York Times quote unnamed current and former national security sources who say they know what Flynn and Kislyak discussed — is there a transcript somewhere? A recording? Flynn's explanation to the Post that he doesn't remember the full discussion only raises eyebrows given that Putin responded to Obama's démarche by taking the high road.

Instead of retaliating by expelling Americans or taking other such measures, Putin did nothing. Is that because he knew he would get a better deal from Trump?

"It is regrettable that the Obama administration is ending its term in this manner," Putin said at the time. "Nevertheless, I offer my New Year greetings to President Obama and his family."

A Closer Look At Michael Flynn

Trump weighed in on Twitter with praise for Putin, calling him "very smart!"

If the White House knows there is a recording, or a transcript or other information about Flynn's contacts that substantiates the news accounts, Flynn could become too hot to handle. If it believes he can ride this out, it does not want to hand Democrats any kind of victory.

Trump's White House team is still getting its sea legs. Trump is the unique president to never have held a government or military job and is still learning the basics of how the federal behemoth works even as he also tries to wield it to achieve his goals.

Part of that unsteadiness is a scramble inside the president's inner circle to determine who gets access to him and who has his imprimatur when acting with people outside the White House. Flynn, who had Trump to himself as national security aide during the presidential campaign, now has more competition from Defense Secretary James Mattis, Homeland Security Secretary John Kelly, chief strategist Steve Bannon and others. The leaks, responses and counterleaks in the press and on TV are the public face of an internal struggle for power.

Compounding the difficulties for Flynn are resentments that may still be simmering against him across the Potomac River in the U.S. intelligence community. Obama fired Flynn after a chaotic run as the head of the Defense Intelligence Agency, during which he is said to have made enemies with his then-bosses in the Defense Department and at least one rival spy service: the CIA.

Flynn appeared to get the last laugh when he befriended a presidential hopeful who won a surprise victory and brought him into the White House. But to the degree there are unsettled scores within the intelligence community, his troubles might not be over.

Trump has never hidden his admiration for Putin or his public desire to improve America's relationship with Russia. He — and voters — knew that Flynn had traveled to Russia after leaving his DIA job and had appeared on Russia's state-run propaganda arm, RT.

Americans accepted the outcome of the election as legitimate and many supporters welcomed what they viewed as the fair-play disclosures by WikiLeaks of information stolen by Russia's hackers. The political dilemma for Trump, however, is that Russia turns into a bad penny, popping up everywhere and never giving him room to maneuver on his own.

Separately this week, Reuters reported that Trump didn't know about the 2010 New START (strategic arms treaty) when he spoke to Putin on the phone — then denounced it anyway. The top U.S. commander in Afghanistan warned Congress about Russian meddling in Afghanistan, which he said was intended to undermine NATO. Russia has increased its military attacks in Eastern Ukraine. Trump risks appearing as though all he does is react to initiatives taken by Putin.

The other political danger for the White House is losing control of the story.

Virginia Democrat Mark Warner, the ranking member on the Senate Intelligence Committee, said the news reports "underscore both the gravity and the urgency" of his committee's investigation into ties between Trump and Russia. And his colleague Chris Murphy, D-Conn., said separately he is glad at least one other investigation is taking place – the one being done by the FBI.