Accessibility links
A Trump Voter And Facebook Insulter Talk It Out — In Person A commenter on NPR's Facebook page called Jamie Ruppert an "idiot" for voting for Donald Trump. We brought them together to talk it out. 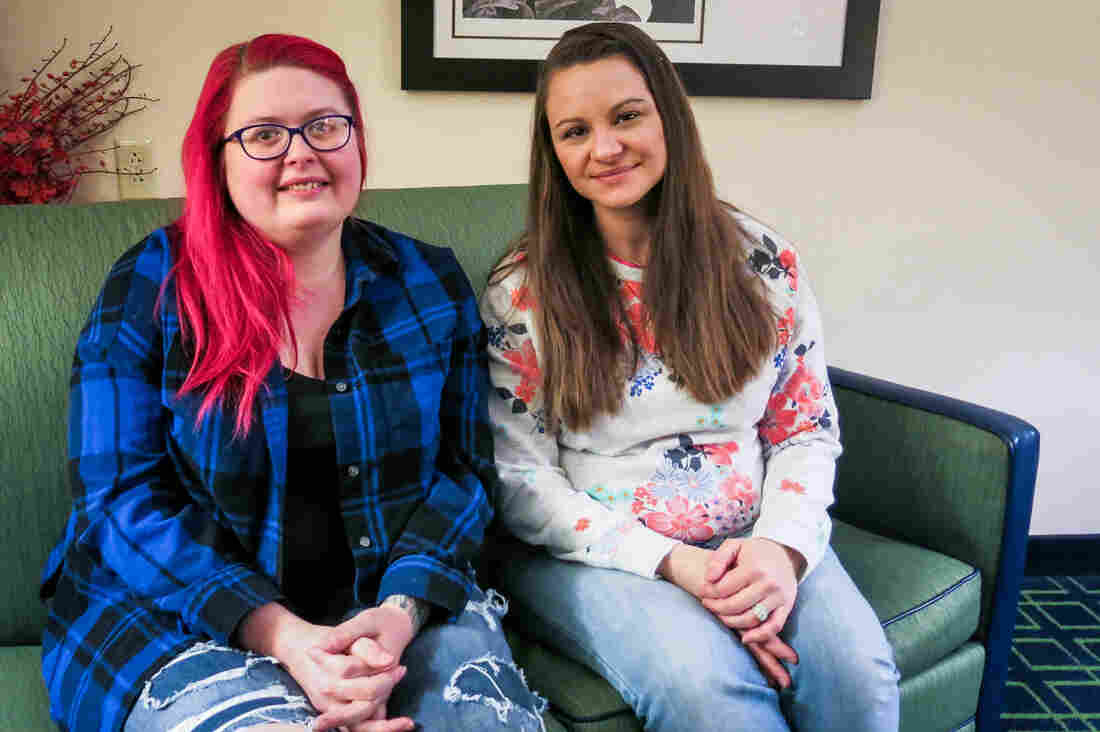 Jamie Ruppert (R) was featured in an NPR story about Obama voters who supported Donald Trump in last year's presidential election. Amy Whitenight (L) labeled Ruppert an "idiot" in a comment on NPR's Facebook page. They recently met in person to talk about their political differences. Jeff Brady/NPR hide caption 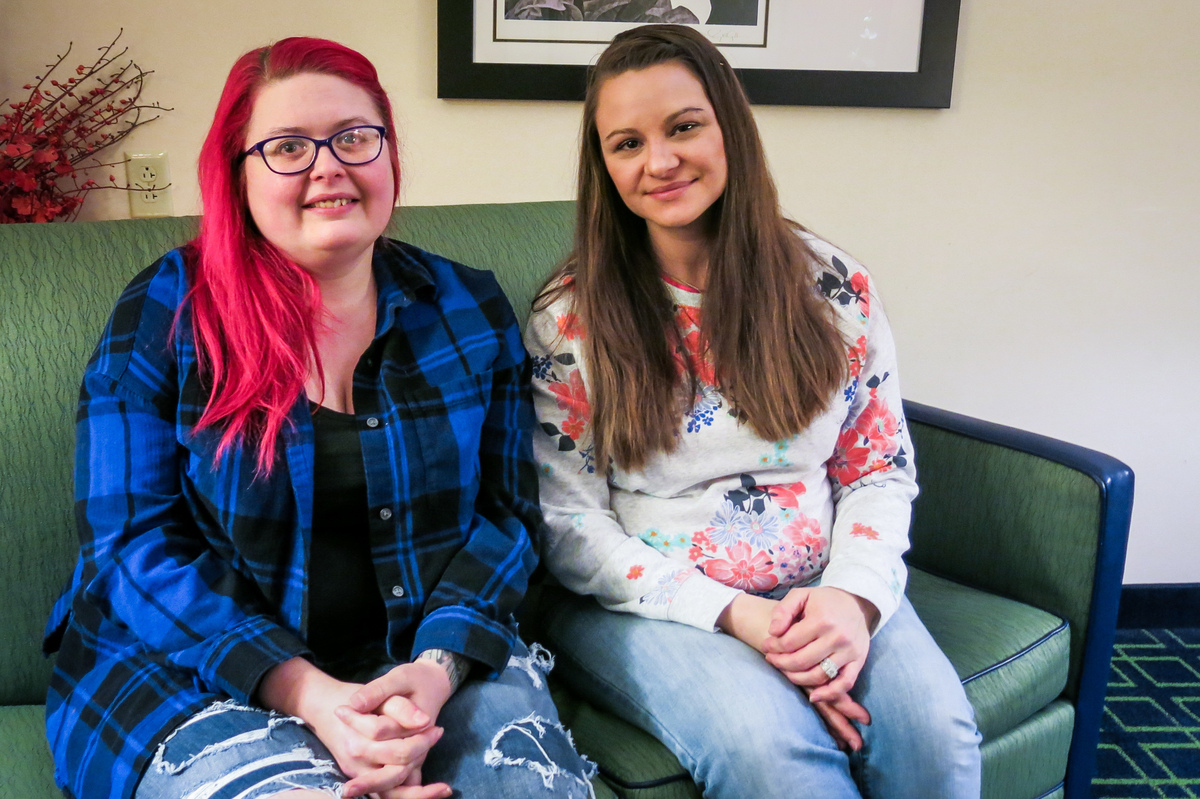 Jamie Ruppert (R) was featured in an NPR story about Obama voters who supported Donald Trump in last year's presidential election. Amy Whitenight (L) labeled Ruppert an "idiot" in a comment on NPR's Facebook page. They recently met in person to talk about their political differences.

It's not often you get a chance to come face-to-face with that person who made a nasty comment about you on Facebook. But one interviewee from our Kitchen Table Series got a chance to do that.

A Trump Swing Voter Looks Ahead

Jamie Ruppert of White Haven, Pa. was featured in a story that aired in January.

She's a swing voter and like much of Luzerne County, where she lives, Ruppert switched from voting Democratic in the past to casting her ballot for Trump in 2016.

When the story was posted on NPR's Facebook page it received more than 6000 comments. The underlying theme from Rupper's critics was that she had been duped into voting from Trump.

We reached out to 10 people on Facebook who posted nasty comments directed at Ruppert. Only two responded. One of them happens to live in the next county over from Ruppert.

"Yeah, I was a little angry at the time," says Whitenight. She says that was right before Trump's inauguration. If she commented now, Whitenight says, "It probably wouldn't have been so angry."

Ruppert calls Whitenight's comment "hurtful" and says, "She's basing my intelligence off of one decision. That's just ... so judgmental and very unfair."

Whitenight agreed to meet with Ruppert face-to-face for a conversation.

It turns out the two have a lot in common. They grew up in Northeastern Pennsylvania, are in their 30s, they're nurses (Whitenight is a registered nurse and Ruppert is a licensed practical nurse) and they're moms.

Both Ruppert and Whitenight voted for Barack Obama in 2008 and 2012. But in 2016 Whitenight chose Hillary Clinton and Ruppert chose Donald Trump.

"I feel like Trump supporters have gone and voted for Donald Trump for the pretty packaging. They are seduced by his words," says Whitenight. She also believes Trump voters aren't aware of the consequences of the president's policies.

Whitenight points to Trump's recent travel ban on immigrants from seven mostly Muslim countries. She says news of that affected an Indian colleague at the hospital where she works.

"He had his daughter come up to him and she was afraid that people were going to hurt her and think she was Muslim," says Whitenight.

Ruppert thinks the parent should assure the child that she is safe. And she says, "People are making mass panic where there doesn't need to be mass panic."

Responding to the claim that Trump voters didn't understand the consequences of their vote, Ruppert says she knew what she was getting with Trump. She liked that he talked about stricter immigration policies and bringing blue-collar jobs back to the U.S.

"I was tired of not seeing Americans come first," says Ruppert.

As we sit down to figure out why these two people with so many similarities voted differently, the conversation turns into a debate over welfare programs. Both women have benefited from them.

Whitenight says as a single mom she needed help while in school studying to be a registered nurse. And she says programs have helped her friends too.

"They now have college degrees. They are now considered middle class, so, I think that's a good thing," says Whitenight.

"But you took the system and you bettered yourself," says Ruppert who counters that not everyone does that.

Whitenight responds, "I'm always flabbergasted that people are so upset by helping people and feeding people and make sure people have housing."

The direction of the conversation prompts Whitenight to ask, "Why do you let other people's situations bother you so much?" She points out that only a small portion of tax dollars go to welfare programs.

This conversation was important because it uncovered an experience Ruppert had a few years back that appears to have played a big role in her decision to vote for Trump. At the time she lived in a rough neighborhood of Wilkes-Barre, Pa.

"I had two white guys pull up in front of my house, start shooting up heroin at 5 o'clock in the afternoon," says Ruppert.

At the time Ruppert says her family was struggling financially. There was a subsidized apartment building nearby that attracted crime and drug-dealing. Ruppert says she saw people driving away in nice cars and it upset her that people who broke the rules appeared to be doing well.

At the end of our conversation Ruppert concludes that she voted for Trump because she's fed up with the current state of the country. She believes Whitenight voted for Clinton because she's afraid of Trump.

Whitenight agrees, but adds that they're both afraid — just of different things.