Accessibility links
Looking For Thor's Hammer: Neil Gaiman On 'Norse Mythology' Author Neil Gaiman first encountered the Norse gods in the pages of old Marvel Comics reprints, when he was 6 years old. Now, he's written his own versions of these ancient tales of gods and monsters. 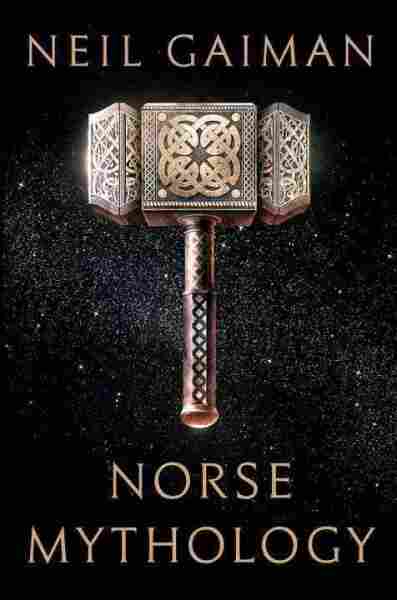 Neil Gaiman was 6 years old when he first met the Norse god Thor — although he wasn't the red-bearded hammer-slinger of legend. "Marvel. Marvel's Thor came first," he says. "I was reading the reprints of Marvel's Thor in an English comic called Fantastic. ... Dr. Don Blake found this stick in a cave, banged it down and transformed into Thor, and the stick transformed into the hammer." Gaiman says he spent a lot of his first decade looking for likely sticks, "just on the off chance that they might the Thor stick, and might transform into a mighty hammer. But none of them ever did."

Not long after that, he picked Roger Lancelyn Green's classic Myths of the Norsemen to learn more about his favorite characters — and found himself fascinated by a vision of Asgard that was nothing like Marvel's sci-fi space palaces. "It was a bunch of huts with a wall round them. Thor was now red-bearded, irritable, muscly, zooming around the sky in a chariot pulled by goats, and not necessarily the brightest hammer in the bag."

That childhood fascination informs Gaiman's new book, Norse Mythology, a lively, funny and very human rendition of Thor the thunder god, his father Odin and and the dark-hearted trickster Loki (plus countless other gods and monsters). Most of what we know about the Norse pantheon comes from the Eddas, two massive works of medieval Icelandic literature that date from the 13th century — but there are countless stories that have not survived.

I spoke to Gaiman by phone about how he approached the ancient tales.

You say in your introduction that it's Ragnarok — the fateful battle that ends the gods — that made these stories stick in your head. Why is that?

The biggest reason is because it turns the entire thing into a tragedy, which gives it depth, it gives it base notes, it gives it a peculiar profundity. It also means that it becomes immediate, as you read about Ragnarok you can always look out of your window and go, "Is that happening now? Is it going to happen?" The gods, even at their funniest, you know that this is waiting for them ... when I was a kid, that fascinated me.

Most Armageddon scenarios, even the New Testament Armageddon scenarios, you may have a lot of angels fighting each other, but nobody says "And then God is going to die, battling Satan, and they're both going to tumble into the pit, and people are going to have to figure out what to do on their own," which would be really rather interesting, and you're not given that. But the Norse, you are — here's Odin killed, fighting the wolf. Here's Thor, killed by the Midgard serpent. Here's Heimdall and Loki, who've always hated each other, finally falling in battle with each other. And that adds a sort of very peculiar depth to the entire operation.

The thing that stuck out to me, reading this, was you talk about all the missing pieces — so I have the dreaded two-part question: What was it like taking this disjointed mass of stories with all these missing pieces and putting it together into a narrative? And what missing piece do you wish most was there?

We have all of these wonderful goddesses — there's Sjöfn and there's Vör — and the idea that you had a doctor of the gods, I think, in terms of the giant list of missing pieces, is the one I find most interesting of all. I would love to read the story — it's as if all of the stories that are lost are women's stories. They're all stories about goddesses, in which goddesses have agency, and you go, "They have to have been there, because here are all the goddesses." And I do not believe that the women ... did not tell these stories. But we don't have any of them.

The other part of your question is, what was really interesting to me was picking stories as I went that felt like they added to the narrative, and felt like they were all on this slow walk to doomsday. And felt like, that if I left them out, you wouldn't get quite the same experience. There were some where I'd look at the story and I'd go, this is a really good story but it's just a little too rapey, doesn't quite work for the whole thing — or it's exactly like another thing.

I felt like I heard some of the rhythms of your writing and your dialogue in some of the things that the gods were saying to each other. How much of you is in these stories?

A lot of the local color and the detail is me — I wound up quite often researching how things worked in Viking times, going, "Okay, we know that we have the master builder and the horse, but how did you use the horse to get large blocks of stone from a quarry to the place you're building?" and discovering, ah, you use a stone boat. It's kind of like a sled. ... And the dialogue was me — and sometimes letting the dialogue be funny was me too.

I love the fact that a book like this is being read, is being taken up. When you start retelling myths, and you go, "Okay, I'm going to try to retell them accurately and faithfully and in my own words, there's no guarantee that anybody's going to be interested. ... And I love that people love the book, that they're actually going "No, we're really interested in this stuff." And I love the strange way that people are going, "This feels peculiarly relevant to today."