Accessibility links
Critics Say Trump Group Doing New Foreign Deals, Despite Pledge To Refrain The Trump Organization reportedly is moving ahead with plans for resorts in Scotland and the Dominican Republic. Last month, President Trump's attorney said he would take on "no new deals" overseas. 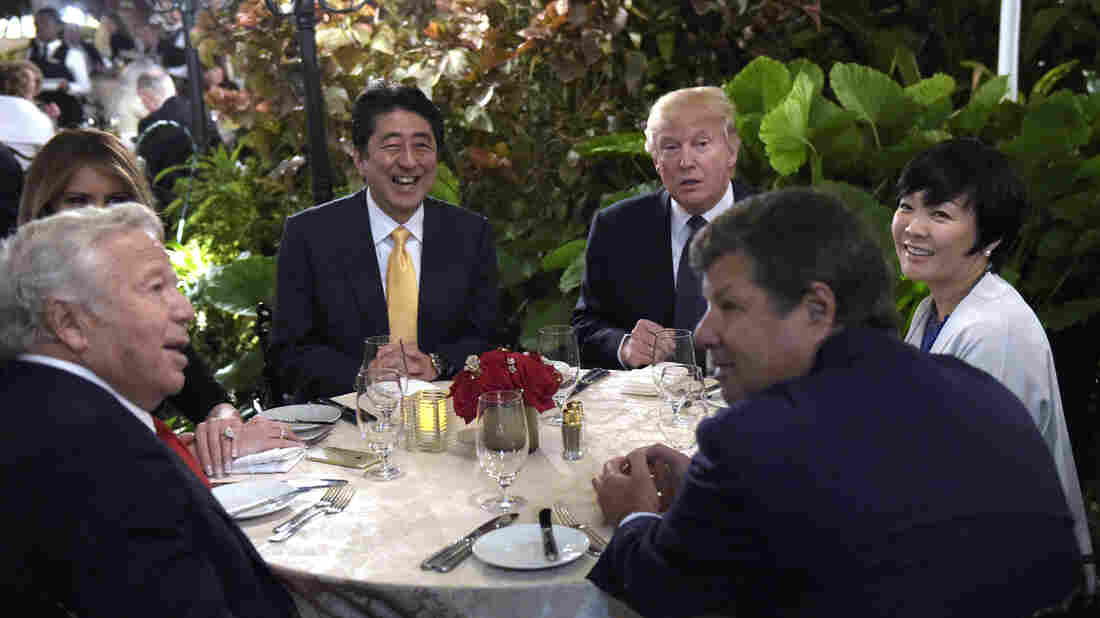 President Trump and first lady Melania Trump (hidden at left) have dinner with Japanese Prime Minister Shinzo Abe and his wife, Akie, at Mar-a-Lago in Palm Beach, Fla., on Feb. 10. Trump said he would personally pay for the visit to his resort . Susan Walsh/AP hide caption 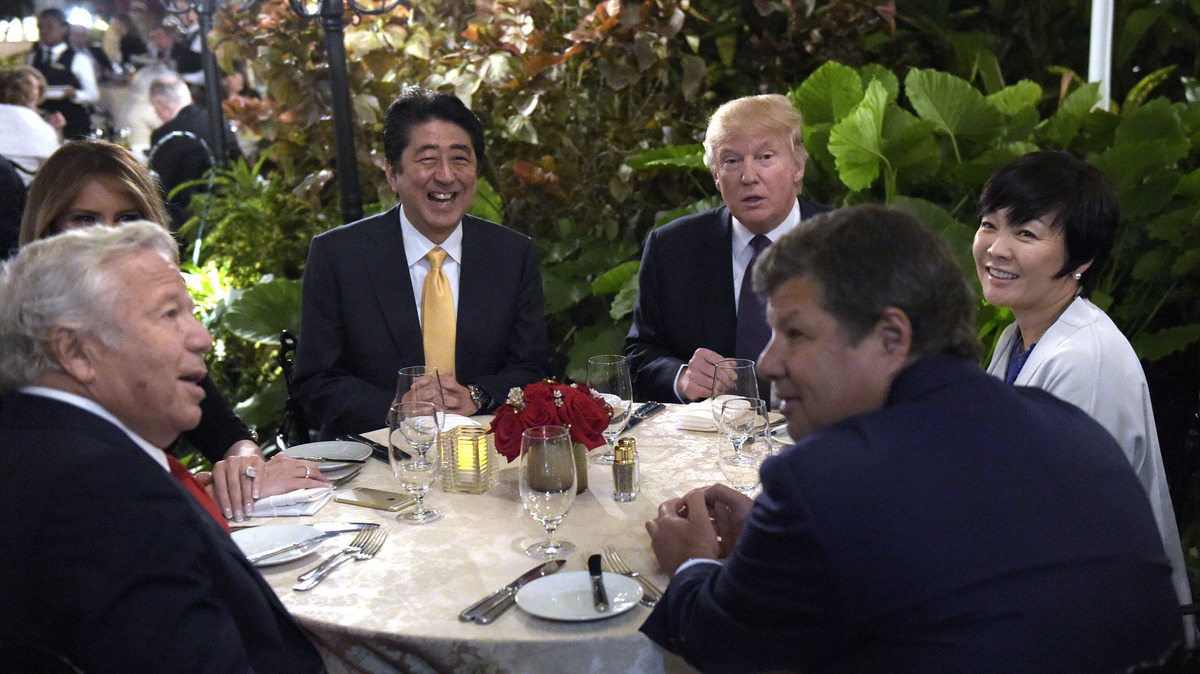 President Trump and first lady Melania Trump (hidden at left) have dinner with Japanese Prime Minister Shinzo Abe and his wife, Akie, at Mar-a-Lago in Palm Beach, Fla., on Feb. 10. Trump said he would personally pay for the visit to his resort .

President Trump and his companies have been trying to navigate potential conflicts and the emoluments clause of the Constitution since before he was sworn in. The list of questions about those conflicts continues to grow, including how Trump is adhering to constitutional rules around compensation from foreign leaders and states.

FACT CHECK: Trump Lawyer's Claim And Comparison To Rockefeller Is A Head Scratcher

This past weekend, Trump sidestepped an apparent emolument when he said that he would personally pay for Japanese Prime Minister Shinzo Abe and his wife to visit Mar-a-Lago, a resort Trump owns in Florida. That meant the government of Japan did not pay Trump's for-profit club for the lodging.

Even with his sons managing the Trump Organization, there are lines Trump's own lawyer identified that still seem blurry. At a press conference in January laying out a number of ways the organization planned to avoid conflicts of interest without fully divesting, Trump lawyer Sheri Dillon specified, "no new foreign deals will be made whatsoever during the duration of President Trump's presidency." She assured the press that the president would have no direct knowledge of the business's strategic moves — despite the fact his sons would take over the brand. The buck seems to have stopped there.

The Trump Organization is pushing to expand a golf course and hotel in Scotland. Eric Trump, who with his brother is leading the family business, recently visited the Dominican Republic, where a branding deal for a resort may be in the works. Both potential deals may violate Dillon's statements. The organization did not respond to our request for comment on either matter.

And on Tuesday, The Associated Press reported that China is about to grant Trump something he has been seeking for a decade: the valuable trademark right to the Trump brand name in the Chinese market. Granting that right would, in effect, be giving the Trump Organization the ability to make much more money in that market, again raising ethical questions.

The issue isn't just potential violations of the organization's promises. It is the bar against foreign emoluments, or compensation due to one's office or employment, which comes straight out of the Constitution. In Article I, Section 9, the Constitution specifies, "no Person holding any Office of Profit or Trust under [the United States] shall, without Consent of Congress, accept ... any present, Emolument, Office, or Title, of any kind whatever, from any King, Prince, or foreign State."

Historically, constitutional scholars have interpreted this section as an anti-bribery clause, but there is virtually no case law to know how it would be used in practice. But many legal scholars worry any foreign deals could be perceived as an attempt to get in the president's good graces. There is, however, one part of the provision that hasn't gotten much attention: congressional consent. Norm Eisen, an attorney who co-wrote a lawsuit challenging President Trump on emoluments, said the framers "left a safety valve." He suggested that the president should let Congress "do the oversight" and decide whether the organization's and the president's choices are "emolument[s] or not."

So far, the administration has made no such move, and in the first hundred days, has continued to find itself in ethically questionable situations. Larry Noble, general counsel at the Campaign Legal Center, said Trump "seems to refuse to try to steer away from situations that will cause problems," including the president's trip with Japanese Prime Minister Abe to Mar-a-Lago and Trump adviser Kellyanne Conway's comments endorsing Ivanka Trump's brand, for which the White House said she was later "counseled."

Eisen said ordinarily these incidents would be relatively minor news because, "people do stumble over these rules," but with the existing turmoil over White House ethics, both moments quickly became national stories.