Accessibility links
Why Is Russia Helping Anti-U.S. Insurgents In Afghanistan? Russia has begun openly supporting and covertly supplying the insurgent Taliban against the U.S.-backed Afghan government in Kabul. What are the aims behind its latest gambit? 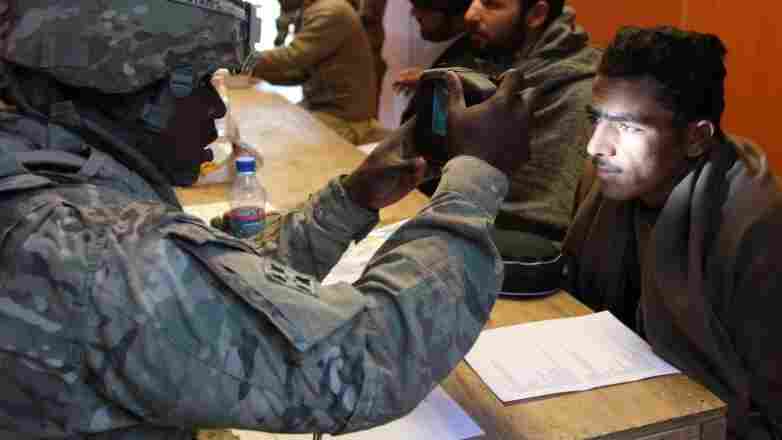 An American soldier scanned the retina of a man in Nangarhar Province, Afghanistan in Dec. 2011. Russia cites the danger of ISIS in Nangarhar as its reason for backing the Taliban, the U.S. says. Sgt. Trey Harvey/U.S. Army hide caption 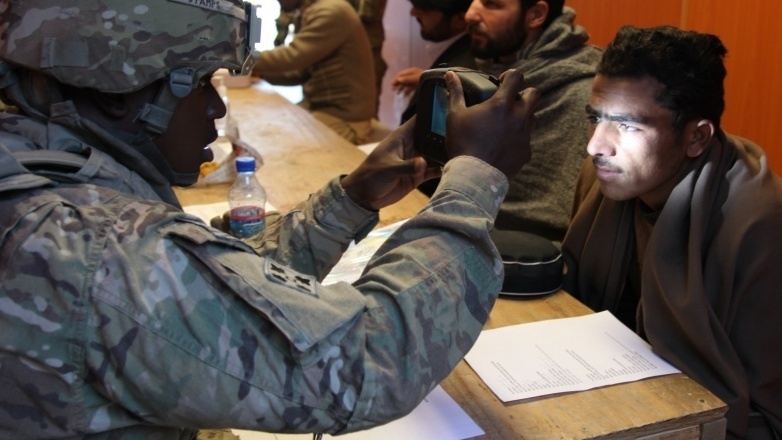 An American soldier scanned the retina of a man in Nangarhar Province, Afghanistan in Dec. 2011. Russia cites the danger of ISIS in Nangarhar as its reason for backing the Taliban, the U.S. says.

What isn't clear is why.

The top American commander in Afghanistan, Gen. John Nicholson, stopped short of detailing everything the U.S. knows about the Russian return to Afghanistan in an appearance before a Senate panel last week. But he did confirm some lawmakers' accounts of what U.S. intelligence has established about the relationship.

"If Russia is cozying up to the Taliban — and that's a kind word — if they are giving equipment that we have some evidence that the Taliban is getting ... and other things that we can't mention in this unclassified setting? And the Taliban is also associated with al-Qaida? Therefore Russia indirectly is helping al-Qaida in Afghanistan," said Sen. Bill Nelson, D-Fla.

Terrorist groups use the Afghan Taliban insurgency as a "medium" in which to operate, Nicholson said, as al-Qaida did before the Sept. 11, 2001, attacks on the U.S.

The disclosures about Russia's operations in Afghanistan, which Nicholson said are increasing after they resumed last year, could complicate any effort by President Trump to work more closely with Moscow on fighting terrorism.

Trump has said he wants Washington and Moscow to do more against the Islamic State in Syria – a goal that already was problematic because Moscow mostly has not been targeting ISIS there. Still, Trump ordered his national security team to present him with a new plan to defeat ISIS, one that could include options for closer cooperation with Moscow, as soon as next week.

The revelation that Russia is covertly supporting U.S. enemies in Afghanistan makes the political case for increasing a counterterrorism partnership that much trickier. And it further expands the global chessboard on which Moscow is playing against the West.

Russian President Vladimir Putin could be serious about expanding Russian influence in Asia Minor. He could be hedging against the potential wavering of current international support for Afghanistan. Or he could be making mischief simply to win concessions elsewhere by Europe or the United States.

Hopes Are High In Russia For Improved Relations With U.S. 'Pragmatic Partners'

There's some evidence that he may be prepared to turn up the heat: The German newspaper Die Zeit reported that Russia is recruiting mercenaries to fight abroad. Russian memories about sending regular troops to Afghanistan might still be too raw after the Soviet Union's disastrous 1980 invasion, as the German paper wrote. So sending mercenaries could enable Putin to put de facto forces on the ground there with a lower public profile.

Or, it may not come to that. Nicholson told Georgia Sen. David Perdue, a Republican, that he believes Putin only views the insurgent groups as a convenient means to irritate the West.

"I think it's to undermine the United States and NATO," Nicholson said.

Moscow isn't only supplying Taliban fighters covertly. It is also talking openly in the region about how the Kabul government, supported by the U.S., doesn't want to fight the Islamic State – but the Taliban does.

That is not true, Nicholson said – the Afghan army and the U.S. are fighting ISIS in Afghanistan, and have reduced its footprint with raids and airstrikes. Also, the ISIS of Afghanistan has little to do with the core group led from Syria, he said. It's mostly made up of Pakistani and Uzbek extremists who "rebranded" themselves.

The upshot of it all, however, is that Russia and the United States have effectively switched roles in Afghanistan: In the 1980s, American CIA officers supplied weapons to anti-government rebels who were fighting the then-Soviet backed government and the Soviet troops supporting it. Today, 15 years after the American invasion, Russia has begun helping the Taliban against a weak American-backed government still supported by NATO troops and airpower.

The war is in "stalemate," Nicholson told the Senate panel, and he needs thousands more troops to help train the Afghan military to continue to improve as a fighting force. The Afghan air force also needs more aircraft, training and funding, he said, before it can give Kabul a decisive edge over insurgents.