Accessibility links
Leaving Urban Areas For The Political Homogeneity Of Rural Towns In the last election, it became easier to see the political divide between urban and rural areas. Now, people from California are moving to northern Idaho to find people similar to them. 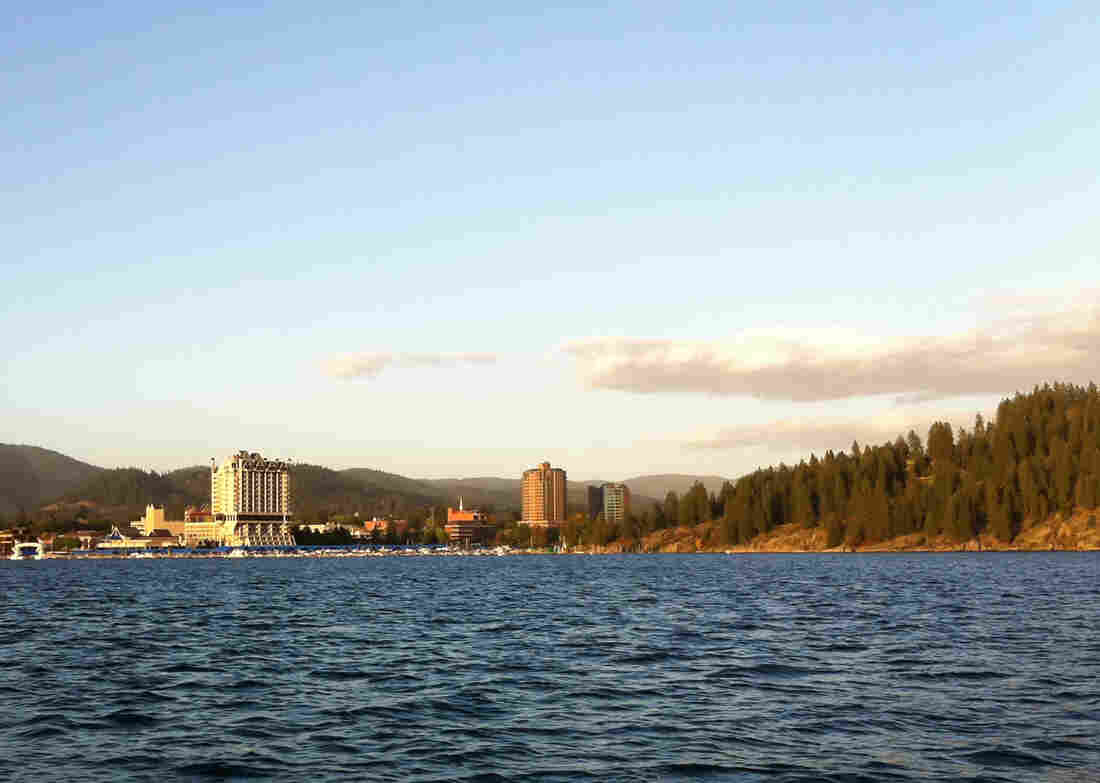 Coeur d'Alene is the largest city and county seat of Kootenai County, Idaho. North Idaho counties like Kootenai have seen their population double since the 1990s. Karen Ybanez/Flickr hide caption 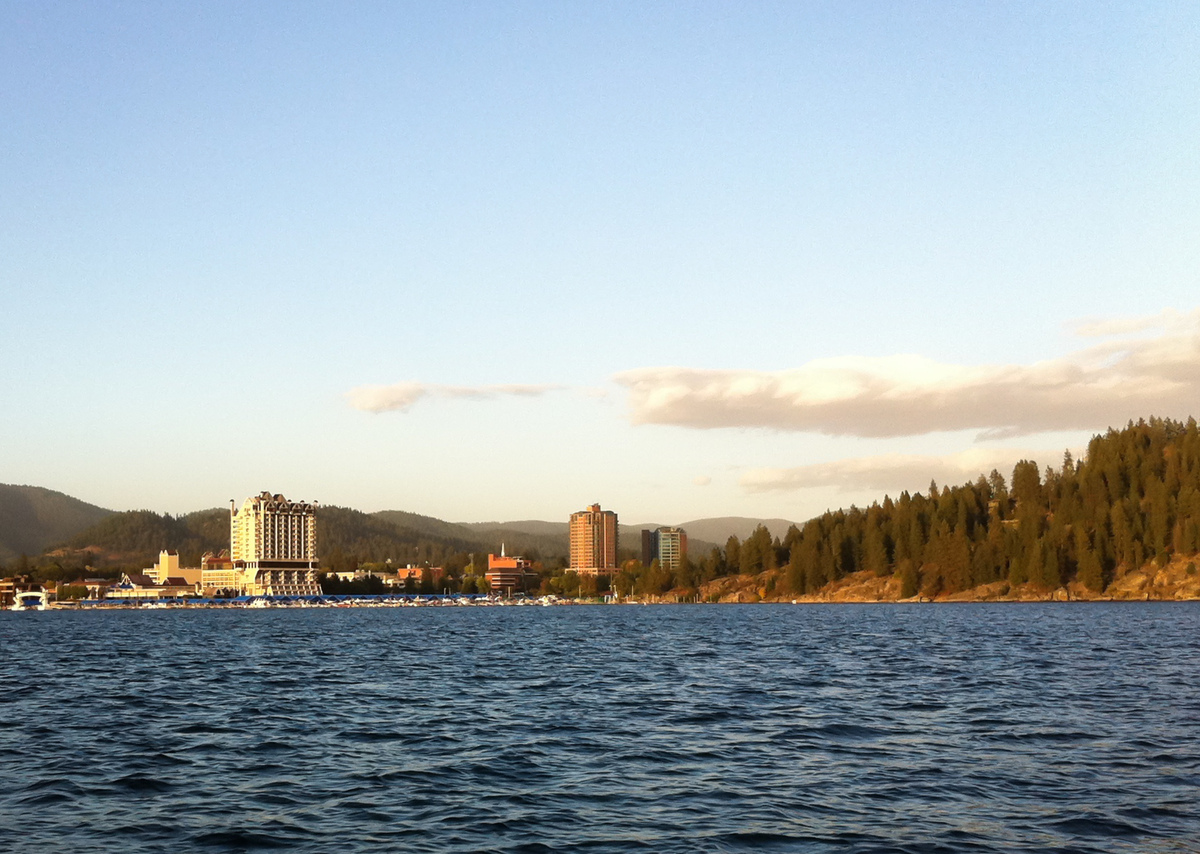 Coeur d'Alene is the largest city and county seat of Kootenai County, Idaho. North Idaho counties like Kootenai have seen their population double since the 1990s.

It became clear in the last election that a stark division existed between urban and rural areas. In places such as north Idaho, people with similar political stripes have begun seeking each other out.

When Adrien Koch retired last summer from her job with FEMA in the Bay Area, she and her husband resettled in the wooded mountains of north Idaho. They had visited only a few months before on a vacation but had quickly fallen in love. For Koch, Idaho reminded her of the California she knew in the 1970s.

"It's kind of like a better time that's gone by," Koch says. "It's a much slower pace, [and] people are more down to earth here."

Koch is 62, with graying blond hair. She's sitting on the couch in her Spartan living room. The house she bought in this quiet cul-de-sac is twice as big and half as expensive as the one she sold in California.

But that's only one of the reasons why she left.

"I did not feel safe because of the crime has escalated and the element that has moved out of San Francisco," she says. "So the farther out you go, yes, it's less expensive, but it's also more dangerous."

Koch instantly felt at home in small town Idaho. She says there are a lot of like-minded Christians. And as she's gotten older, to her surprise, she's become more conservative.

"I've always been fearful of guns," Koch says. "However, I am open now to learning, and the gun stores and gun clubs here in Coeur d' Alene are very warm and welcoming."

Koch was also struck by just how many ex-pat Californians are here. They are everywhere: the gun shop owners, the retirees at the golf resorts. They hold seats on school boards and in local government.

"I immediately tell people, especially if they're not from California, I am not one of those people who want to change Idaho," Koch says. "I love it the way it is, that's why we're here."

While it's long been a popular sport among longtime locals of the Mountain West to complain about the "California-zation" of states like Idaho, the fact is there has been a considerable demographic shift playing out in this region since the early 1990s. 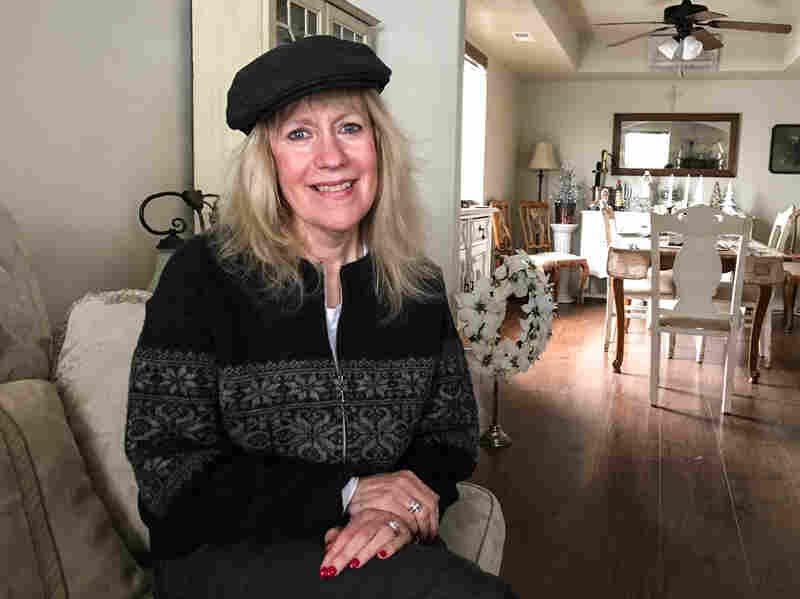 Adrien Koch, 62, sits in the bedroom of her northern Idaho home, which is twice as big and half as expensive as the one she sold in California. Kirk Siegler/NPR hide caption 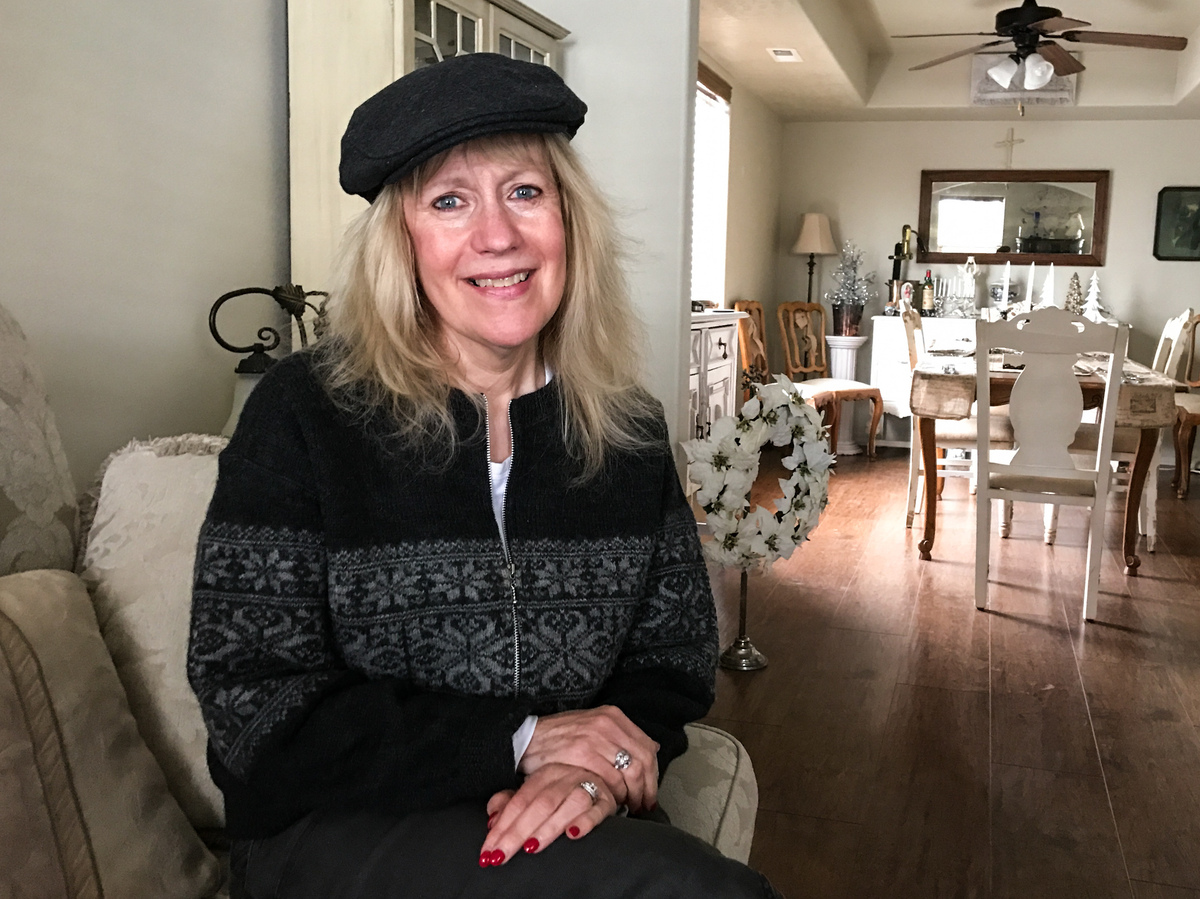 Adrien Koch, 62, sits in the bedroom of her northern Idaho home, which is twice as big and half as expensive as the one she sold in California.

That was around the time of the deadly earthquakes in California. There was a lot of racial tension after the Rodney King beating. Housing costs had already been soaring, and the outmigration of Californians moving to nearby states such as Idaho really picked up.

Since then, northen Idaho counties like Kootenai have seen their population double. Even as late as 2015, the census shows that more than a quarter of all new residents moving to the state still came from California.

The idea that like-minded people like to live together and in some cases are seeking one another out is being put in renewed focus in the wake of the divisive 2016 presidential election. This is regardless of whether it's in the more conservative rural areas or liberal cities.

The rural vote in the Electoral College played a key role in the surprise election of Donald Trump.

The Electoral College is weighted disproportionately to rural, now mostly red states like Idaho. So if you're a conservative and you move up to Idaho from California, your vote has nearly twice as much impact.

This is not lost on people like C.J. Buck, who picked up and moved his entire business — Buck Knives — from Southern California a few years back.

Buck says his family manufacturing business — they make hunting knives mostly — decided to leave the Golden State because business costs (primarily taxes and workers comp premiums) were getting too high. And they didn't have to be there, he says.

Buck entertained an enticing tax incentive package from Portland, Ore., but they settled on Idaho.

"We looked at Idaho as not having a major metropolitan area [and] that would mean as a state we would stay truer to those rural understandings," Buck says.

What he means is that there isn't a major city like Portland or Los Angeles that would swing Idaho's politics to the left. Especially when it comes to minimum wage increases.

"The beauty of Idaho is, you just never lose connection; it's the people who need the jobs who are the ones voting on the issues," Buck says.

Business owners like Buck are hoping to rebuild a manufacturing economy in the region. Since the late 1980s, north Idaho has transitioned from a mostly natural resources-based economy to one that's much more dependent on services, like health care, real estate and tourism.

"The economy has changed enormously," says Mary Lou Reed, a Democrat, who represented Coeur d' Alene in the state legislature until 1994.

Reed also moved here from California, albeit in 1956. She recalls how north Idaho was once the country's top silver producer and union Democrats once ruled up until the late 1980s.

"The lumber mills are all gone, the mines are shuttered down, we do not have labor unions that are active," she says.

Today, Kootenai County doesn't have a single Democrat in an elected office.

For Reed, there's one thing that no one talks about out in the open at least with all these demographic changes.

"We're very, very white up here," she says. Kootenai County is 95 percent white according to the most recent census, compared with much of California today, where whites are in the minority.

She insists race plays a factor in some people's decisions to move up here.

"No question the white flight is to flee from a multi-racial situation into one into in which everybody looks the same," she says. "It's very dull."

This is definitely an uncomfortable subject. Some of the transplants didn't want to talk about race as a reason for moving. Others said it didn't have anything to do with it.

After a few days, it became clear that race and politics are as complicated in northern Idaho as anywhere else.

Take the story of Anna and Luis Oropeza, who settled recently in a modest home in one of the many new subdivisions that are sprouting up in the pine forests on the western edge of Coeur 'd Alene.

They half-joke that they're surrounded by fellow Californians in their cul-de-sac.

"Looking at houses, I'm like, oh, there's another Californian moving to the neighborhood," Anna says, laughing.

The Oropezas relocated last year from California. For Anna it was like coming home. 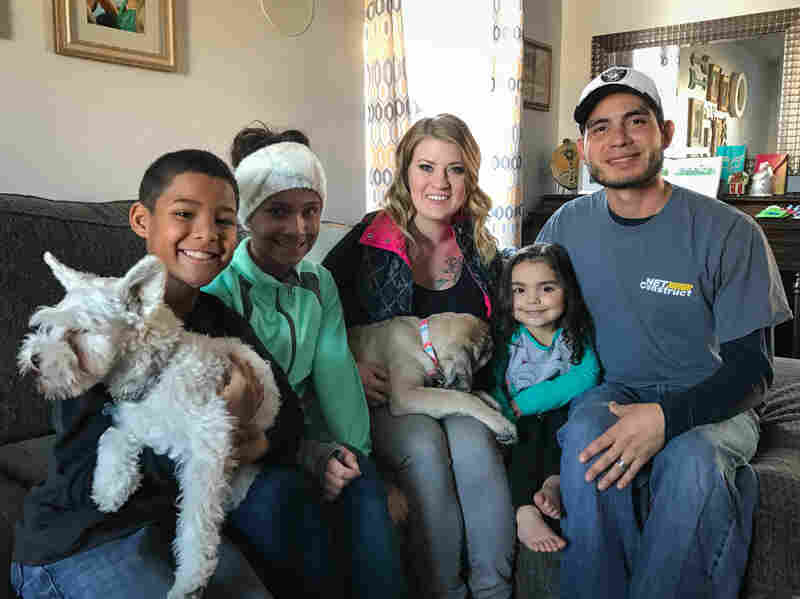 Anna and Luis Oropeza settled in a home on the western edge of Coeur 'd Alene and are raising two African-American foster kids and a Latina child. Kirk Siegler/NPR hide caption 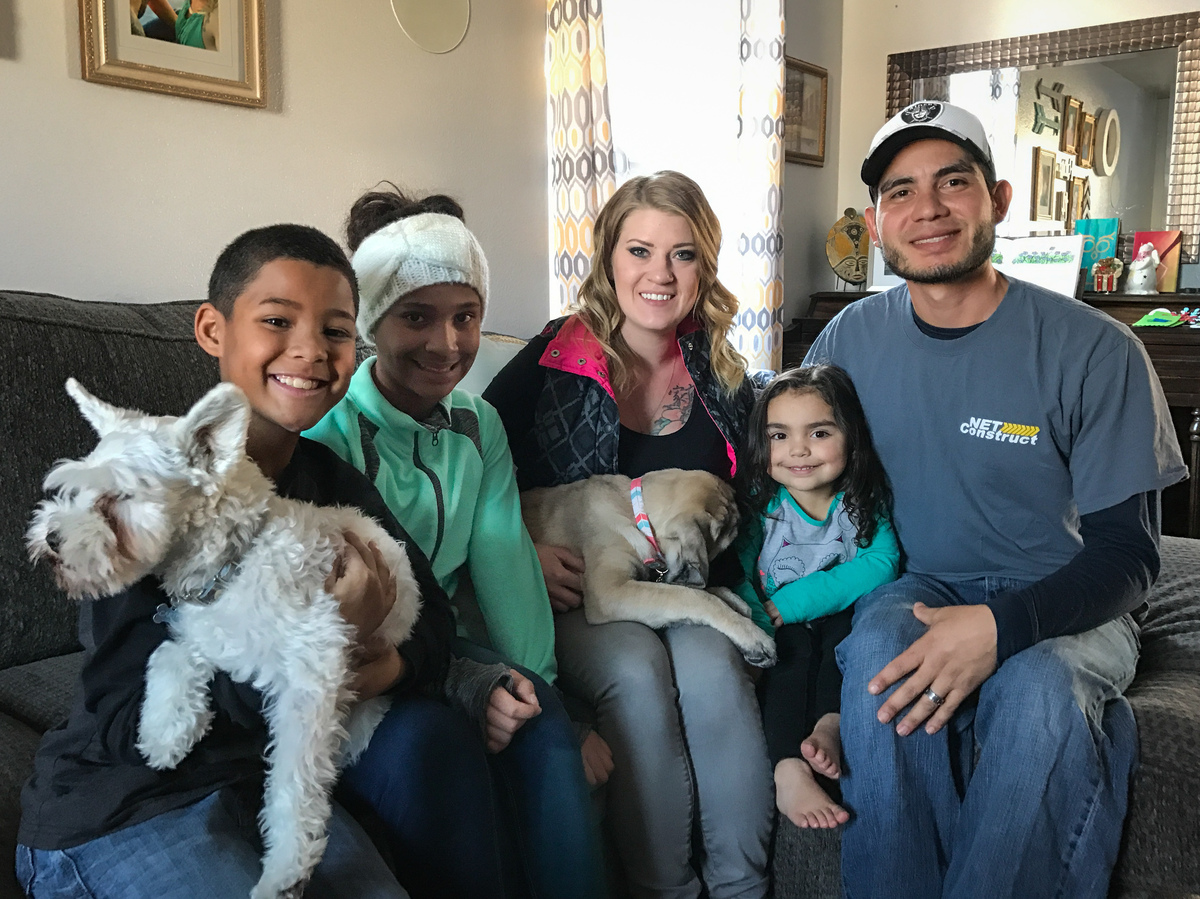 Anna and Luis Oropeza settled in a home on the western edge of Coeur 'd Alene and are raising two African-American foster kids and a Latina child.

She grew up in the Coeur d' Alene area. Her parents moved her up from Orange County, Calif., in the early '90s. When they decided to move again, they were a little apprehensive at first.

Anna is white, and Luis is Hispanic. They're raising two African-American foster kids and a Latina child.

"When I first moved up here people were like, 'Oh you're gonna get the eye' or whatever," Luis says. "But it's never happened to me. People are just as nice as can be."

The couple thinks this is a safer place to raise kids than the city they moved from in California. And they like the politics, too. Luis says Idaho is more live and let live.

"The laws are just way too strict compared to up here," he says. "Here you can actually practice your amendment. A lot of people like the freedom."

A gun owner, Luis says that even he was surprised when he first walked into a store here and saw someone openly carrying and it was no big deal. In California he says, someone would call the cops right away.