'Insomniac City' Is A Valentine To New York, Oliver Sacks And Life Itself

'Insomniac City' Is A Valentine To New York, Oliver Sacks And Life Itself 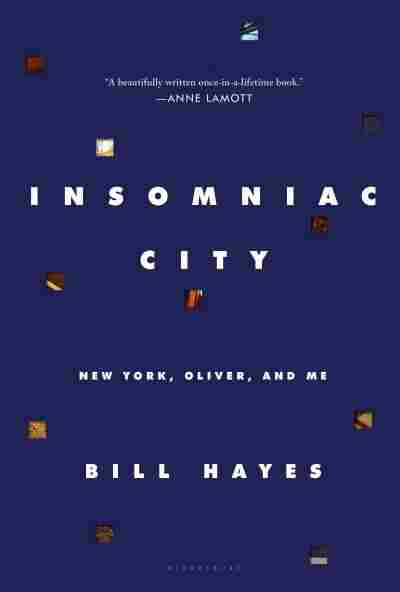 New York, Oliver, and Me

Even before cracking Bill Hayes' mixed-media memoir, you know it's going to be special: This is the man who enabled neurologist and writer Oliver Sacks to do what a lifetime of therapy hadn't — connect intimately and openly with another man, ending three and a half decades of celibacy. Sacks finally came out about his thwarted sexuality and joyful late awakening in his memoir, On the Move, which was published just a few months before his death from cancer in 2015. Insomniac City is Hayes' valentine to Sacks, New York City, and life itself.

The two men met in 2008, after a correspondence initiated over The Anatomist, Hayes' book about Gray's Anatomy. Their epistolary relationship evolved into friendship and then much more after Hayes moved from San Francisco to Manhattan in 2009, at age 48. Heartbroken over the sudden death of his long-term partner — who had survived AIDS long enough to benefit from lifesaving new medications, yet succumbed to cardiac arrest at age 43 -- Hayes needed a fresh start.

Unable to write, he took a full-time job fundraising for a nonprofit. He also began photographing people he met on New York's streets and subways — skateboarders, hustlers, young lovers, the dry cleaner's daughter. His arresting pictures celebrate the fact that "beauty comes in unbeautiful ways" in the city that never sleeps.

Augmenting these photographs are brief prose portraits and extracts from Hayes' journals, in which he describes encounters with cabbies, a street poet, a 96-year-old artist living in the same tiny, cluttered third-floor walkup apartment for 66 years — and, most noteworthy, his relationship with the brilliant older man who captivated him from the get-go. Hayes writes unabashedly of his attraction to Sacks: "He was without a doubt the most unusual person I had ever known, and before long I found myself not just falling in love with O; it was something more, something I had never experienced before. I adored him."

Oliver Sacks Was A Boundless Explorer Of The Human Brain

Although Hayes and Sacks never married, the charming, intimate portrait that emerges earns a place on the shelf of moving spousal tributes — a gallery that includes Calvin Trillin's About Alice and John Bayley's Elegy for Iris, to name just two. Visual and verbal snapshots capture Sacks' quaint formality and "essentially cheerful" temperament. Hayes wisely jotted down snippets of their conversations, which reveal the probing and often unexpected trajectory of Sacks' thoughts, including out-of-the-blue statements like, "I find I am very interested in automatism ... It's the signal characteristic of homeostasis!"

Insomniac City teems with sweet, unguarded moments, as when Sacks, sitting on the toilet while Hayes takes a bath, tells him, "I am glad to be on planet Earth with you. It would be much lonelier otherwise." There are funny exchanges too, some of which highlight their differences: "Take heed of the ferns!" Sacks warns Hayes, who responds teasingly, "Take heed? Who talks like that? ... Queen Victoria?" In a note from June, 2011, Hayes writes: "The difference between us in two words: 'Me, too,' I say. 'I, too,' O corrects."

Hayes learns a lot about the elements, science and classical music from Sacks. But, although 28 years Sacks' junior, Hayes has much to teach him, too, especially about sharing and caring. He likens his inexperienced lover's rapid personal development to the "accelerated evolution" of birds adapting to loud urban conditions. They spend a lot of time together swimming laps, cooking dinner, and admiring the sunset — sometimes stoned — from the roof of the building in which they live in separate apartments three floors apart. Sacks, endearingly, dons swimming goggles before Hayes teaches him how to uncork champagne.

Hayes' touching portrait of Sacks' last years is the main attraction here. His offbeat urban cameos — some of which first appeared as short slice-of-life essays in The New York Times -- reveal a remarkable openness, but can come across as subtly condescending, precious, or even grating, however well-intended. (A Sri Lankan cabdriver rebuffs Hayes' naïvely rosy view of his job: "No, not fun. Stressful. It's always stressful.")

Nonetheless, Hayes emerges as an unusually kind, caring man. One night, after helping an increasingly frail Sacks get ready for bed, he asked if there was anything else he could do for him. "Exist," Sacks answered.

Sacks worked diligently until the end, writing gorgeous, unforgettable essays about his mortal illness. Four months before he died, he told Hayes, "The most we can do is to write — intelligently, creatively, critically, evocatively — about what it is like living in the world at this time." With his tender memoir, Hayes shows that he took this advice very much to heart.