Accessibility links
Iowa Moves To Restrict Collective Bargaining For Public Sector Workers About 180,000 state and local government workers would be prohibited from negotiating over issues such as health insurance and extra pay. The bill is high on the state GOP's legislative agenda. 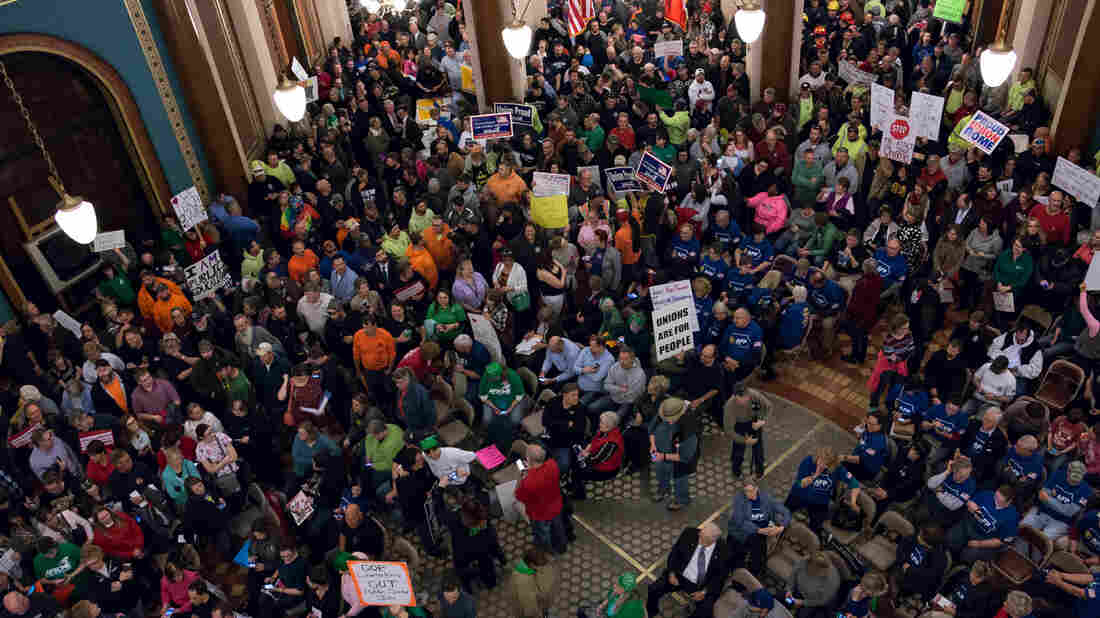 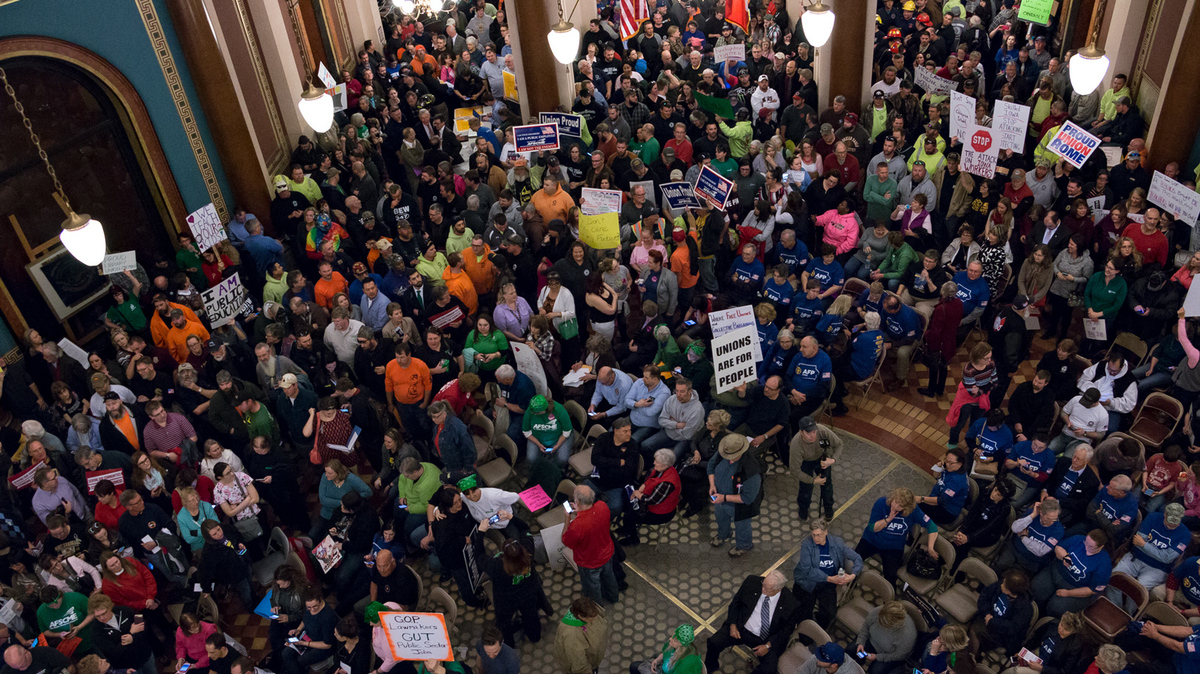 Hundreds of demonstrators on the Iowa Capitol's Rotunda floor protest a bill that would restrict collective bargaining for local and state government workers.

Lawmakers in Iowa began debating a bill Tuesday to dramatically change how public sector unions negotiate their contracts, part of a wave of legislation in statehouses across the country to roll back union rights.

The bill, similar to a 2011 law in Wisconsin, is high on the state's legislative agenda and comes as Republicans control both chambers of the state Legislature and the governor's mansion for the first time in nearly 20 years.

About 180,000 state and local government workers would be prohibited from negotiating over issues including health insurance, seniority and extra pay. The legislation also leaves in place a provision that prevents workers from going on strike. And it includes provisions that would make it more difficult for unions to collect dues.

Ahead of hearings on the leglslation, teachers, teamsters, firefighters and other union members demonstrated at the Iowa Capitol Monday night, breaking into chants of "Kill the bill."

"Enough of these misguided politicians and their billionaire buddies trying to take our voice and our rights!" shouted Becky Pringle, of the National Education Association, to the crowd from atop a folding chair.

The state's Democrats are trying to slow down debate on the measure, which is expected to last several days.

"This is a major change and policy shift," said state Sen. Nate Boulton, a Democrat. "It is disappointing that we had no voice in this process."

Republicans countered that they were ending a period of deadlock and divided government in Iowa by acting on their priorities.

"Normally the frustration I hear from folks at home is that we don't get anything done," said state Rep. Steve Holt, a Republican. "So we are acting decisively on a bill that I think is great for Iowa and great for efficient government."

More than 1,100 people signed up to speak against the bill, but only 33 got the chance. State correctional officer Lindsey Herron said she left her previous job, which paid well, for the better benefits that state employees receive.

If the bill becomes law, the risks of working in a prison are "no longer worth it," said Herron. "You may think that's fine until those offenders end up living next door to your family and they learn nothing in prison because they no longer have professional educated staff working there."

Herron said she was upset about voting for Republican candidates last fall. "If this bill passes, don't think in 2018 I'm going to forget what you've done to my family."

Just four people spoke in favor of the bill, including representatives of the Iowa chapter of Americans for Prosperity, the nonprofit political advocacy group funded by conservative donors David and Charles Koch.