Accessibility links
Michael Flynn, Jared Kushner, And Whether The Logan Act Was Violated The White House says it is confident former national security adviser Michael Flynn said "nothing wrong or inappropriate" to the Russian ambassador. Releasing the transcript would help clear that up. 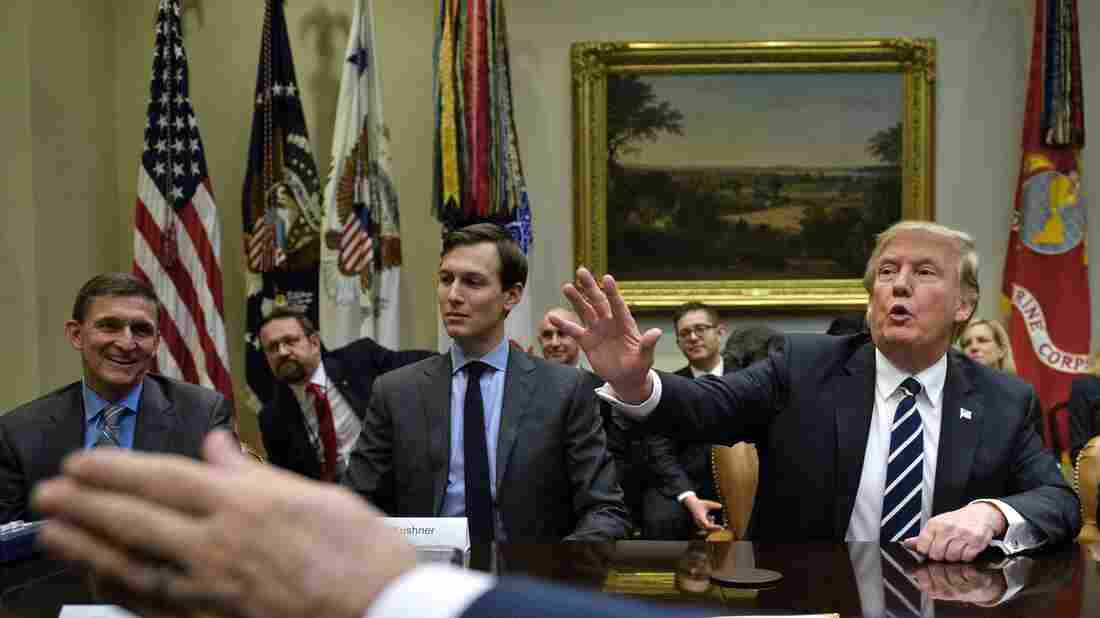 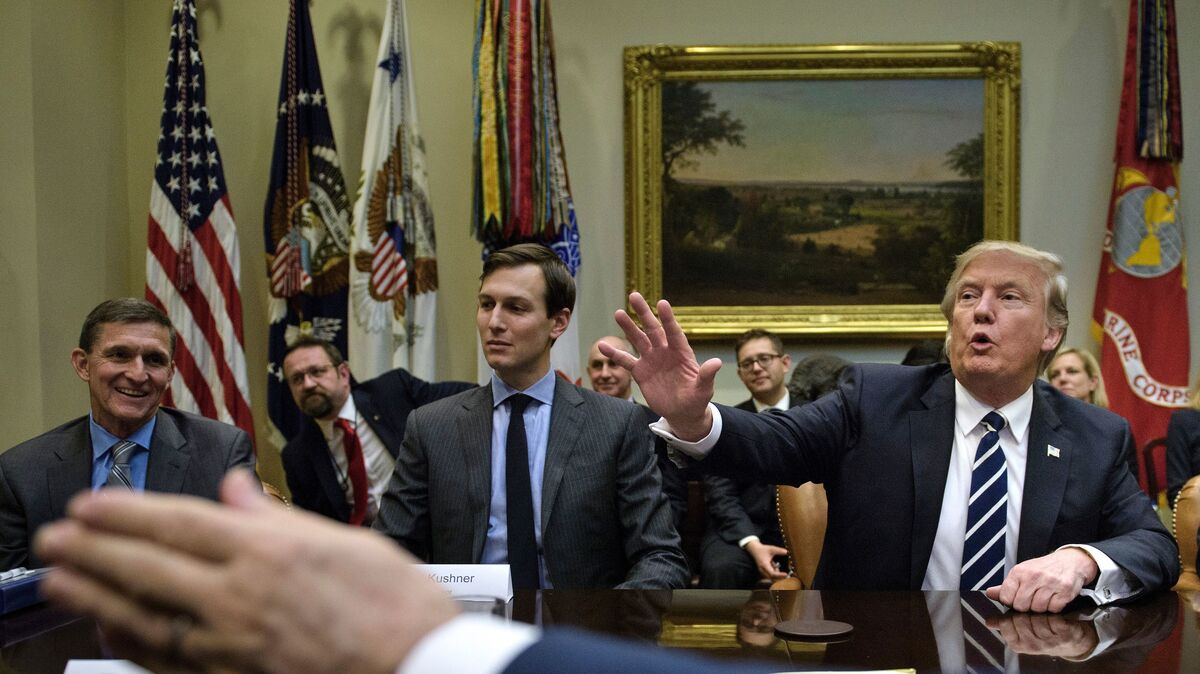 Michael Flynn, President Trump's former national security adviser, pleaded guilty Friday to providing false statements to the FBI. Those are less serious charges than he could have faced, because he is cooperating with special prosecutor Robert Mueller's investigators.

Flynn likely has something to trade, as NPR's Carrie Johnson noted on All Things Considered Friday. Flynn was not acting alone, according to charging documents against him. In fact, there were multiple members of the presidential transition team who spoke with Flynn about his communications with the Russian ambassador.

That included a "very senior member," who "directed Flynn to contact officials from foreign governments, including Russia ..." Several news organizations have identified that individual as Jared Kushner, President Trump's son-in-law.

The Logan Act often comes up in relation to the Russia investigation. Back in February, we noted that Flynn himself could have violated it. But now that Mueller is looking up the food chain, we dug out and refreshed our post explaining what it is, why it matters — and why it is seldom used.

What is the Logan Act?

The Logan Act states, in part (emphasis ours):

Let's break that down. This is saying that no private person can try to conduct foreign policy without the permission of the U.S. government.

Specifically, that person isn't allowed to talk with a foreign government or its representative and try to influence foreign policy — "directly or indirectly."

When was it put in place and why?

It's named for Dr. George Logan, a Democratic-Republican Party lawmaker from Pennsylvania, who traveled to France in 1798 and negotiated the lifting of an embargo and the release of American sailors held captive in French prisons.

He did so without the permission of President John Adams, though he was a friend of then-Vice President Thomas Jefferson's.

It was after the French Revolution, and the United States didn't help France because of a treaty with England. The French were upset and began robbing passing American ships and jailing its sailors.

Official Adams administration envoys tried unsuccessfully to settle the unrest with France — and the country appeared tumbling toward war with France. That's when Logan, a Quaker, embarked on his effort.

He succeeded, but when he got back to the U.S., Adams, Washington and others were furious. Congress then acted to bar actions like Logan's from taking place again.

Has anyone ever been convicted of violating it?

This is important, because as often as this law is mentioned, no one has ever gone to jail for it, meaning the likelihood of its being used is pretty slim.

Why hasn't anyone been convicted?

Often, the people who get mentioned are people who are in government and seem to defy the sitting president. For example, remember when then-House Speaker John Boehner invited Israeli Prime Minister Benjamin Netanyahu to address Congress?

Obama and Netanyahu had an icy relationship because of Israeli settlement expansion. (Ironic considering what the charging documents say Flynn did in trying to get Russia to vote a certain way on a United Nations resolution dealing with that very issue.)

So some people raised the Logan Act and whether Boehner was in violation. Most said no. Here's why, per the Washington Post:

"That's partly because the law is vague about which branch of government can give permission for someone to conduct foreign affairs, noted Eugene Volokh with The Volokh Conspiracy blog at The Post in 2015.

"It could be the executive branch, it could be Congress. It could even be the president telling just one member of Congress to go do something without telling the others. It seems like [there] are so many loopholes and uncertainties, it's hard for prosecutors to peg down how someone violated this law — and even harder for courts to make that determination.

"But the law is pretty clear that you need to have permission from the government to do something, and it doesn't look like Flynn had permission to talk to Russians about sanctions while the Obama administration was still in power."

So has there ever been an attempt to prosecute someone for it?

Yes, once someone was indicted.

That was way back in 1803, four years after the law was enacted.

An anonymous column ran in a Kentucky newspaper arguing for "A Western America" allied with France. The U.S. attorney for Kentucky was an Adams ally and persuaded a grand jury to indict Francis Flournoy, a farmer, who actually wrote the column.

But it never went to trial.

Later that year, the Louisiana Purchase, which expanded the United States farther west, made it moot.

How else has the Logan Act been used?

Mostly as a political weapon.

Various courts have mentioned the Logan Act, according to the Congressional Research Service, but it has mostly been used to try to shame political opponents.

For example, in the 1980s, there was House Speaker Jim Wright's relationship with the Sandinista government in Nicaragua — and Jesse Jackson negotiating in Syria and Cuba for prisoner releases.

"That is the law of the land," a frustrated President Ronald Reagan said in an interview in 1984 of the Logan Act and Jackson's efforts.

He added, "We are not going to take legal action, but I do feel that while in this instance he was successful, there were things that make you pause and think."

OK, that was the 1980s. Has it been mentioned more recently?

During the George W. Bush administration, House Speaker Nancy Pelosi took a trip to Syria and talked about improving U.S.-Syria relations with that government, irritating the White House.

Former President Jimmy Carter also traveled to Syria in 2008 to meet with Hamas about Mideast peace.

As recently as 2015, the act was mentioned again when 47 Republican U.S. senators wrote a letter to Iran downplaying the nuclear deal. Sen. Tom Cotton, who has been rumored to be in line as Trump's next CIA director, penned the letter — and was accused of violating the act.

The potential of a Logan Act violation was raised again when Democratic Rep. Tulsi Gabbard of Hawaii met with Syrian leader Bashar Assad in January of this year, before Trump was sworn in.

"I wanted to see if there was, in some small way, a way that I could express the love and the aloha and the care that the American people have for the people of Syria," she told CNN.

The Obama administration's official position was regime change in Syria. President Trump has said the U.S. should work with Russia to bring peace in Syria. Russia's policy is to leave Assad in place.

Could the "very senior member" be susceptible?

We noted in February that if Flynn, in any way, reassured the Russian ambassador in his phone conversations or texts that the incoming Trump administration would loosen or drop the sanctions Obama put in place, that could potentially be a violation.

That could be the same for whoever "directed" Flynn (or whoever directed the person who directed Flynn) if there was reassurance on sanctions.

The charging documents note that:

"Flynn and the PTT official discussed the U.S. Sanctions, including the potential impact of those sanctions on the incoming administration's foreign policy goals. The PTT official and Flynn also discussed that the members of the Presidential Transition Team at Mar-a-lago did not want Russia to escalate the situation."

The charging documents do not make clear what Flynn urged exactly when it came to sanctions — if there was reassurance, for example. But there is a transcript of that call collected by the intelligence community, and presumably Mueller's team has reviewed it.

The White House said in February it was confident Flynn didn't say anything that violated the law.

"There was nothing wrong or inappropriate about those discussions," then-White House press secretary Sean Spicer contended after Flynn was fired in February.

The White House has not commented since Flynn's guilty plea.

A previous version of this story called Dr. George Logan a Republican lawmaker from Pennsylvania. He was actually a Democratic-Republican.