Accessibility links
Book Review: In Calabria,' By Peter S. Beagle Beagle has spent his career writing about unicorns — and he returns to that enclosed garden with In Calabria, the tale of a grouchy farmer who finds a pregnant unicorn investigating his fields. 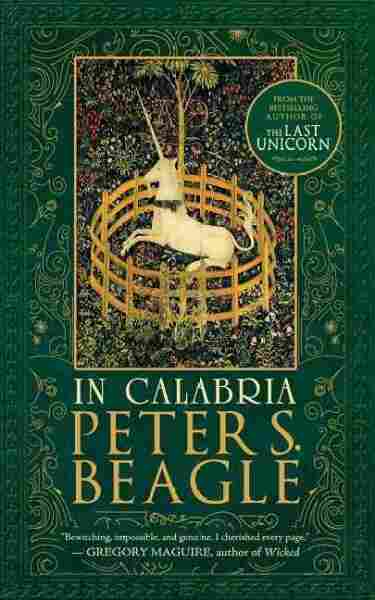 Peter Beagle owes much of his career to a unicorn — specifically, the protagonist of his 1968 novel The Last Unicorn, the lyrical, tragic, wryly funny bestseller that inspired a cult-hit animated movie and earned him a permanent spot on virtually every knowledgably curated best-fantasy-of-all-time list. Over more than 55 years of writing fantasy, non-fiction, autobiography, and humor, he's returned to unicorns many times in smaller ways, from the Last Unicorn sequel novella "Two Hearts" to the young-adult novel The Unicorn Sonata to short stories like "Julie's Unicorn" and "Professor Gottesman And The Indian Rhinoceros."

Unicorns are a long-term preoccupation of Beagle's, possibly because the way he conceives them is so emblematic of the kind of fantasy he writes. In his work, unicorns aren't just animals with magic tacked on. They're avatars of ineffable, unearthly wonder. When people in Beagle stories interact with unicorns, they always come away stupefied and enthralled at having touched something much older, richer, and vaster than anything humanity has to offer. But they generally come away more human, as well.

The trend continues with In Calabria, a short novel about a stubborn middle-aged Italian farmer who finds a pregnant unicorn investigating his land. In private, Claudio Bianchi is a poet and a secret romantic. Around other people, like pushy mailman Romano Muscari and his no-nonsense sister Giovanna, Bianchi is gruff and dismissive. He enjoys his privacy, his independence and his isolation. And when the unicorn arrives, he enjoys her too, in a secret, private, almost religious way.

The unicorn does not speak, and gives no clear indication that she understands his florid speeches of companionship. But Bianchi regards her as a hallowed mystery, as welcome and alien to him as the other beloved animals on his farm. Inevitably, though, word about the unicorn spreads. Bianchi's farm is invaded by hunters and tourists, protestors and fanatics, and eventually dangerous criminals who want to force him off his family's land and seize the unicorn and her colt for themselves.

Peter Beagle will always be associated with unicorns. It's fortunate, then, that he's turned them into such a potent metaphor.

The Last Unicorn is florid and flowery. Every other sentence contains an elaborate metaphor or a magnificently strange turn of phrase. But Beagle's writing style has slowly trended away from Last Unicorn's loopy whimsy over the past five decades. In Calabria feels worlds away from his first unicorn story: It's punchy and frank, with a simple, direct style that mirrors Bianchi's straightforward inner life. The plot gently recalls James Thurber's "The Unicorn In The Garden," another minimalist story about a man who takes profound joy in a visitor on his property, then encounters resistance from the rest of the world. And the comparison feels clearer than it might be with a more elaborately realized book, because Beagle's prose here is so lean, so focused on bare dialogue and action.

In Calabria is exactly like Bianchi himself: practical on the surface, but harboring an inner warmth and sentiment that informs every step. Like so much of Beagle's work, it's about jaded adults experiencing childlike awe again, for better and worse. Bianchi's tragic history has led to isolation, and meeting something wondrous eases him back into parts of the world he considered closed to him. This is how Beagle has always dealt with magic: At his best, he combines earthy practicality with delight and bewildered joy, and his work usually nestles folklore and modern concerns side-by-side. In Calabria upholds that pattern, putting unicorns in the same world as gangsters and news helicopters, and exploring how they'd all interact. But the real pleasure of the book is in seeing how cranky, withdrawn Bianchi flowers once something really extraordinary enters his life.

It's been a hard decade or so for Beagle, who is currently suing his former manager for fraud and physical abuse, only a few years after finally resolving the longstanding legal battle over his contractual rights to the film version of The Last Unicorn. But he's been undergoing a minor renaissance lately, with In Calabria and his 2016 book Summerlong marking his first novels since 1999's Tamsin. As absorbing and well-realized as his short fiction is, it's still exciting to have him involved in longer work again, particularly when he's returning to his favorite theme, and finding new ways to revitalize it.

Peter Beagle will always be associated with unicorns. It's fortunate, then, that he's turned them into such a potent metaphor, suitable for any era, and any kind of troubled hero in need of a little magic.

Tasha Robinson is a culture writer at Vox Media's technology and entertainment site The Verge.