Accessibility links
With "Fake News," Trump Moves From Alternative Facts To Alternative Language The phrase is a threat to democracy, as a Republican strategist and a left-leaning linguist both explain to NPR. 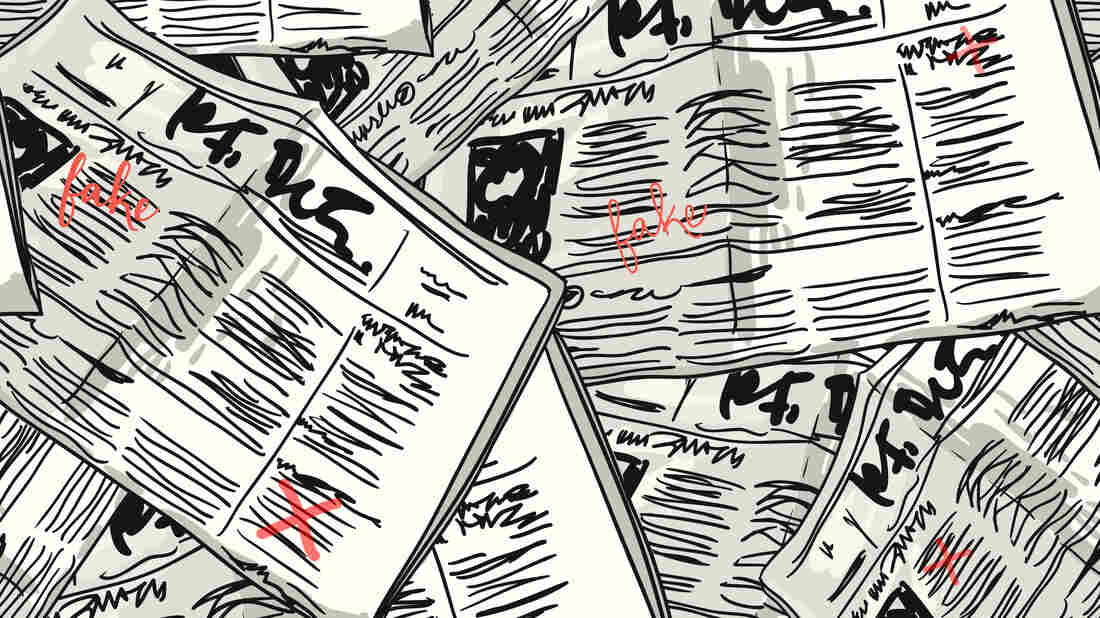 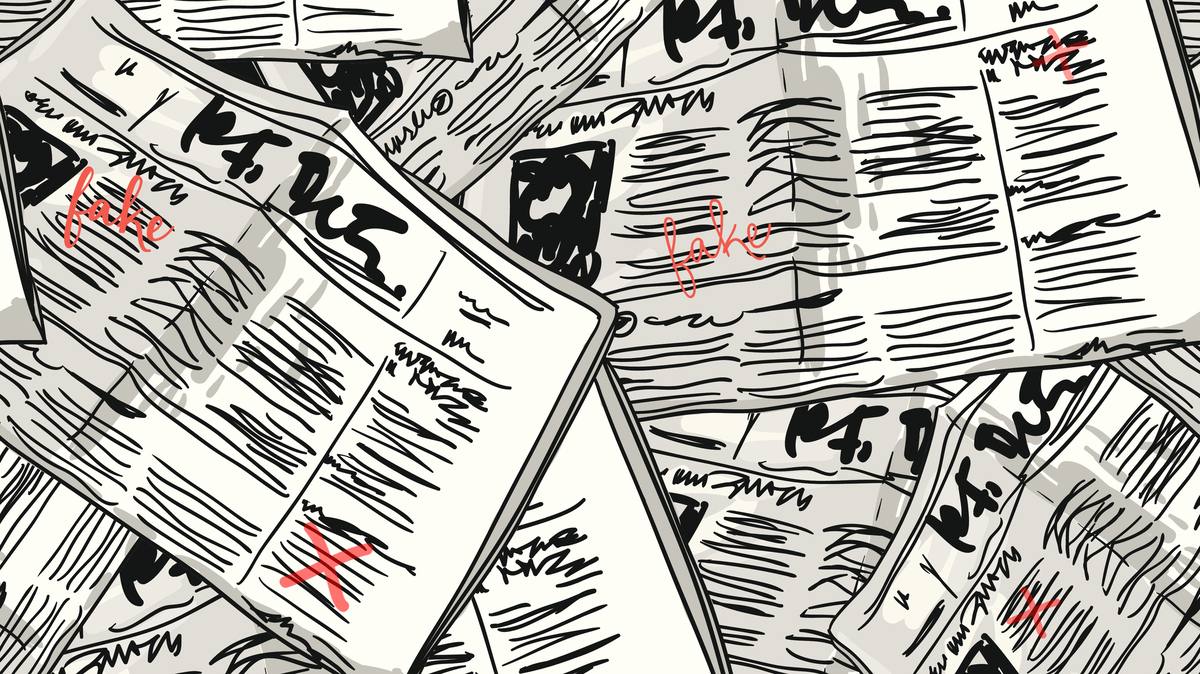 Friday night, President Trump took to Twitter to deliver one of his favorite insults to journalists: "The FAKE NEWS media (failing @nytimes, @NBCNews, @ABC, @CBS, @CNN) is not my enemy, it is the enemy of the American People!" he wrote.

The FAKE NEWS media (failing @nytimes, @NBCNews, @ABC, @CBS, @CNN) is not my enemy, it is the enemy of the American People!

It's a phrase President Trump has now tweeted 15 times this month (10 times in all caps). He used the phrase seven times in his Thursday news conference.

Anyone who has followed the news knows this isn't what "fake news" meant just a few months ago. Back then, it meant lies posing as news, made up by people from Macedonian teenagers to a dad in the Los Angeles suburbs. The stories impacted the election to some unmeasurable degree, and they also presented a tangible threat when a gunman inspired by false stories fired shots inside Washington pizza restaurant Comet Ping Pong.

Now, Trump casts all unfavorable news coverage as fake news. In one tweet, he even went so far as to say that "any negative polls are fake news." And many of his supporters have picked up and run with his new definition.

The ability to reshape language — even a little — is an awesome power to have. According to language experts on both sides of the aisle, the rebranding of fake news could be a genuine threat to democracy.

The danger of the word "fake"

As a linguist, University of California, Berkeley professor George Lakoff is one of the few people in the world who can truthfully say things like "I've studied the word 'fake' in some detail."

Because of that expertise, he finds the term fake news uniquely troubling. He explained to NPR exactly what is so destabilizing about calling news "fake."

To illustrate, he used the word "gun." Putting the adjective "black" in front of it doesn't negate that it's a gun. It just specifies a kind of gun. That black gun still has the same primary function of any other gun — that is, it can shoot something.

But the word fake is entirely different, Lakoff said in an email to NPR:

"A fake does not have the primary function, but is intended to deceive you into thinking that it does have that function, and hence to serve the secondary function. A fake gun won't shoot, but if you are deceived into thinking it is real, it can intimidate you."

News' primary function is to not be fake; it's to pass along factual information that serves the public good, and the people who create it intend it to be factual and to serve the public good. By Lakoff's logic, putting most modifiers in front of the word news — good, bad, unbiased, biased, liberal, conservative — still implies that the news is still somehow news. It is in some way tied to that main purpose, of being tethered to reality, with the intention of informing the public.

When Trump calls news fake, then, that word implies that the news isn't serving its basic purposes: It means that the story is intended to serve something other than the public good, and that the author intended to falsify the story.

In other words, calling something fake news implies that it isn't news at all. And using that phrase in the way that Trump uses it, said Lakoff, is dangerous:

"It is done to serve interests at odds with the public good. It also undermines the credibility of real news sources, that is, the press. Therefore it makes it harder for the press to serve the public good by revealing truths. And it threatens democracy, which requires that the press function to reveal real truths."

It may seem like a lot of fuss over one little phrase, but to Lakoff, it's an important fuss.

"Calling real news fake is an attempt to hide the truth and undermine the function of the truth in a democracy," he said.

Technology has been a big aid in Trump's quest to redefine fake news. With the help of Twitter and Facebook, language is, arguably, slipperier than ever.

"The speed of language adoption has never been as fast as it is now, and part of that is because of social media and the ability to touch people wherever they are, whenever you want, with no limits," said Frank Luntz, a Republican strategist who has helped the GOP choose the words it uses to sell its policies.

On top of that, Trump had a receptive crowd to begin with: Republicans in particular, along with some independents, hold journalists in low regard, according to several polls.

According to Luntz, though, it took Trump's political skills to capitalize on those trends.

"I've never seen anyone in politics with the potential communication capability of Donald Trump," said Luntz. He added, "He's certainly not a unifier, but boy is he powerful and is he credible to a segment of the population that feels forgotten and left behind."

Trump also arguably picked a great phrase to take advantage of: one that was both young (so perhaps more malleable) and powerful. The phrase "fake news" originally telegraphed a sense of danger about nefarious types intentionally sowing lies to influence the election. When Trump calls an unfavorable poll "fake news," he's borrowing some of the phrase's original power, even as he dilutes that power by reusing the phrase.

The result is a dizzying dichotomy, as Lakoff pointed out in an interview with NPR: "real fake news" (stories about "pizzagate" and a made-up endorsement from the pope) and "fake fake news" (claims that legitimate stories are made up).

But the speed with which Trump's messaging ricochets around the Internet worries Luntz, who fears that there is no accountability; technology helps unfiltered (and unchecked) ideas to spread quickly. That means that a phrase can be redefined in an entirely new way "within a matter of weeks," he said.

"In the case of fake news, the problem is that we are actually undermining the core principles of a democracy," he added, echoing Lakoff.

The phrase fake news itself is young, and Trump's abilities may be unique, but the fact that he is spinning language to his advantage is nothing new.

"If you think about rhetorical strategies — and I think it's something that Trump has been very good at — I think this is something that has happened time and again during presidencies," said Adam Berinsky, a political science professor at MIT, pointing to the ongoing tug of war during Barack Obama's presidency over what to call health care overhaul.

"Did we call health care reform 'ACA' or 'Obamacare'?" Berinsky said. "Similarly, Donald Trump being able to take the term fake news and turn it into basically an epithet for any media he doesn't like — it's a very effective strategy."

"So it's a new development, but it's a very familiar pattern," he concluded.

The definition changed ... but only for some people

Trump has not succeeded at changing the definition of fake news for everyone. Google the phrase or search it on Twitter, and it is used in two ways (sarcastic uses aside). One is the original sense. The other is to slam mainstream media organizations, often on behalf of right-leaning organizations.

The Christian Broadcasting Network's David Brody, for example, flung the phrase at CNN's Jim Acosta, who criticized Trump for calling disproportionately on right-leaning outlets. It's a valid disagreement, but it doesn't mean Acosta's remark is fake news.

Likewise, conservative website The Federalist recently listed 16 stories that it classified as fake news. But many do not even approach the term's original meaning, as the Washington Post's Callum Borchers wrote. The author classifies a story that required a correction as fake news, for example (though by definition, a fake-news writer intending to deceive wouldn't try to correct a story). Other complaints are about perceived tone or framing. One can always argue that a story is poorly framed or biased. But that doesn't make it fake news.

The Trump Media Survey Is Phenomenally Biased. It's Also Useful

Luntz — who himself perceives a left-leaning bias in many media organizations — explains that having problems with tone isn't the same as negating the truth.

"While I have differences from time to time with what people report and the tone that they take, I am an advocate of a vibrant, constructive media," he said. "When you start to suggest that there are alternative facts and you start to criticize your opponents for fake news, you're undermining the credibility of the one institution that holds all the others accountable."

One language for the right; another, for the left

It's not normally news when language shifts meanings — when the definitions of words like "decimate" or "literally" start to soften. Few (aside from copy editors and dictionary publishers) would call it a crisis.

But with fake news there are serious potential problems ... problems that go even beyond disputes over what is fact and what is fiction. The shifting definition of fake news may be a sign of a broader gap between right and left. In July, author George Saunders painted a picture of that gap:

"Intellectually and emotionally weakened by years of steadily degraded public discourse, we are now two separate ideological countries, LeftLand and RightLand, speaking different languages, the lines between us down. Not only do our two subcountries reason differently; they draw upon non-intersecting data sets and access entirely different mythological systems."

If it is indeed true that the term fake news has come to mean something different for a conservative than a liberal, it could be one more sign that the LeftLandian and RightLandian languages — and the people who speak them — have moved one more inch apart, into increasingly different realities.