Accessibility links
Migrants Choose Arrest In Canada Over Staying In The U.S. A rural road in northern New York has become a magnet for migrants who no longer want to stay in the U.S. Growing numbers are stepping into Canada, knowing Mounties immediately will arrest them. 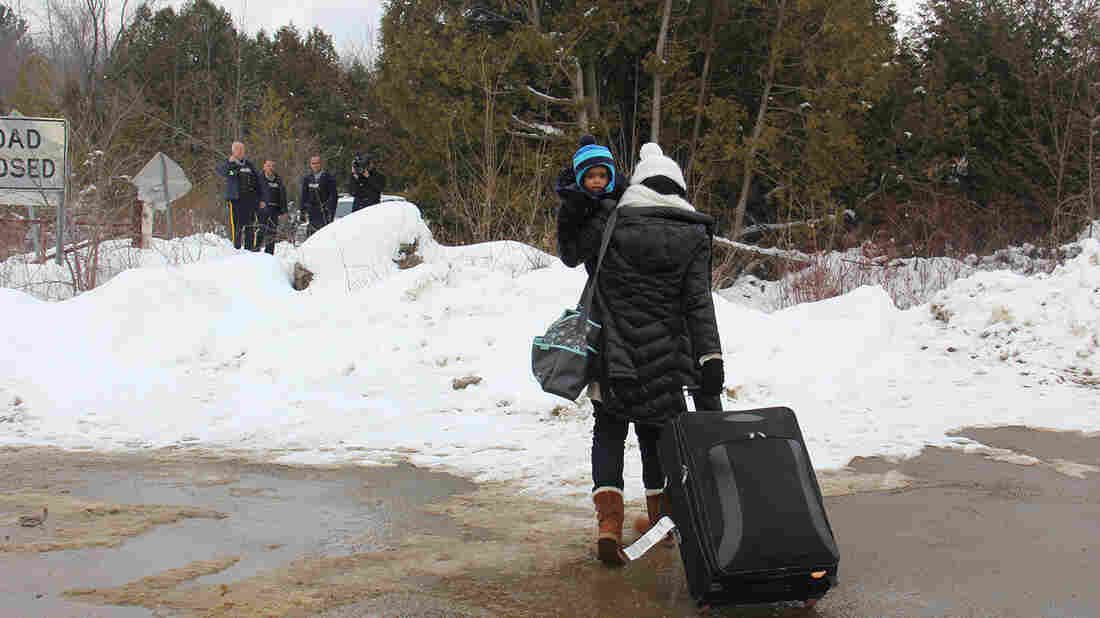 A woman traveling alone with her infant, seeming to understand that she will be arrested, walks toward Canadian police on the far side of the border. Kathleen Masterson/VPR hide caption 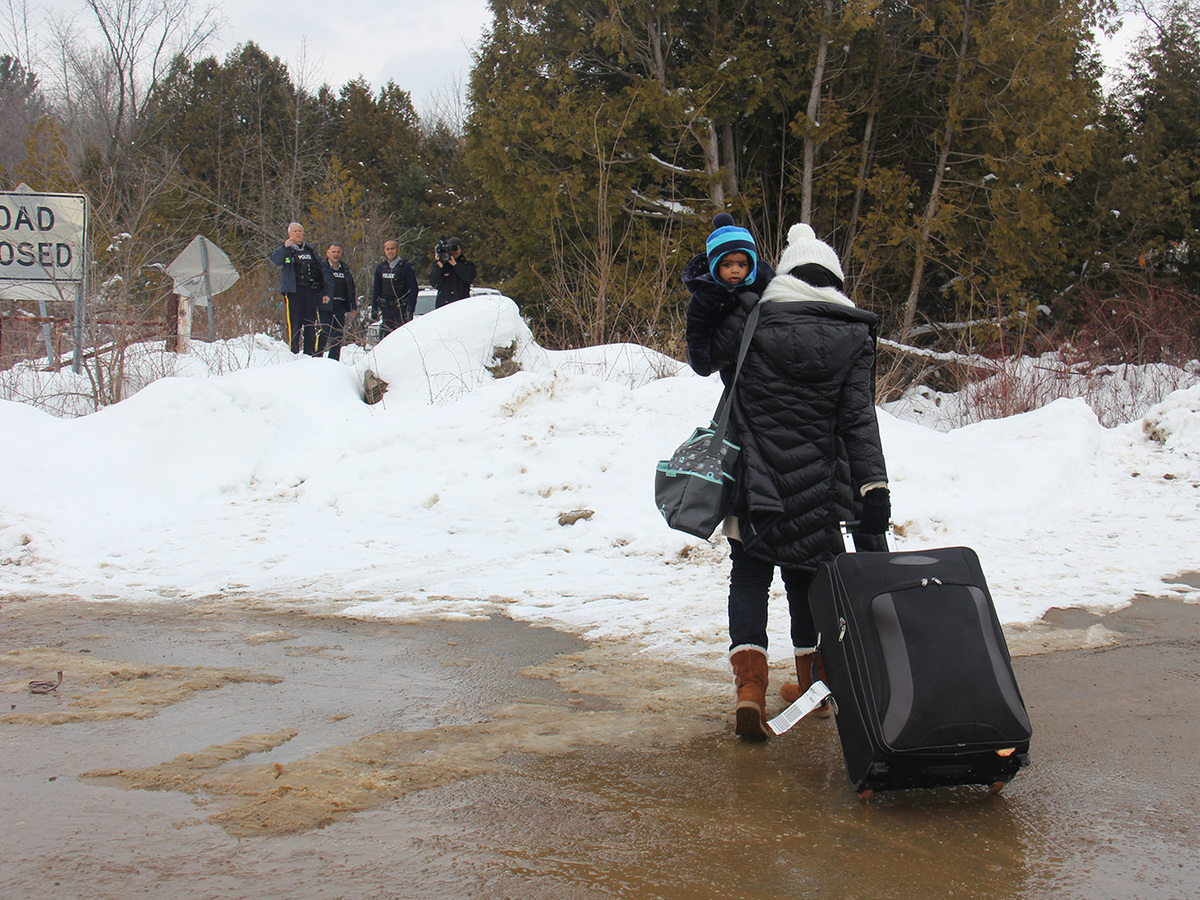 A woman traveling alone with her infant, seeming to understand that she will be arrested, walks toward Canadian police on the far side of the border.

Royal Canadian Mounted Police are reporting a flurry of illegal crossings into Canada in recent months. Officials say Quebec province has seen the highest influx of people seeking asylum, with many crossing in snowy, remote areas in northern New York.

One illegal crossing area that has become particularly popular among immigrants is in Champlain, N.Y., in the northeast corner of the state.

At the end of Roxham Road, there's a big dead end and a "Road Closed" sign — but there's also a very heavily trafficked, trodden route through the snow that goes over into Canada. From the ditch, the border is about 15 feet away, and the Mounties — the Canadian police — wait on their side for those who will cross the border next.

'A Day Without Immigrants' Promises A National Strike Thursday

Turner and his family moved into a trailer on Roxham Road in October. He says that, since then, he has seen people walking past his house, as well as a steady flow of taxis driving by.

Taxis like the blue Honda minivan that rounds the corner. It's stopped by U.S. Border Patrol agents, but after the officer inspects the passenger's paperwork, the cab is allowed to continue.

At the road's end, a young woman with an infant gets out of the taxi. She doesn't want to talk and seems to have limited English.

She hugs the baby to her chest and, with her free hand, pulls a black suitcase on wheels. As she moves toward the ditch, several Canadian police officers approach on their side.

One officer speaks out, saying, "You have to go through the, the custom, the border — but if you do cross here, you'll be arrested and then we'll take you in charge, OK?"

The woman nods and steps toward them. The Canadian policeman offers to carry her baby as she makes her way through the slippery snow path. She hands the child to him and then takes the hand of another officer who helps her to the road on the Canadian side. 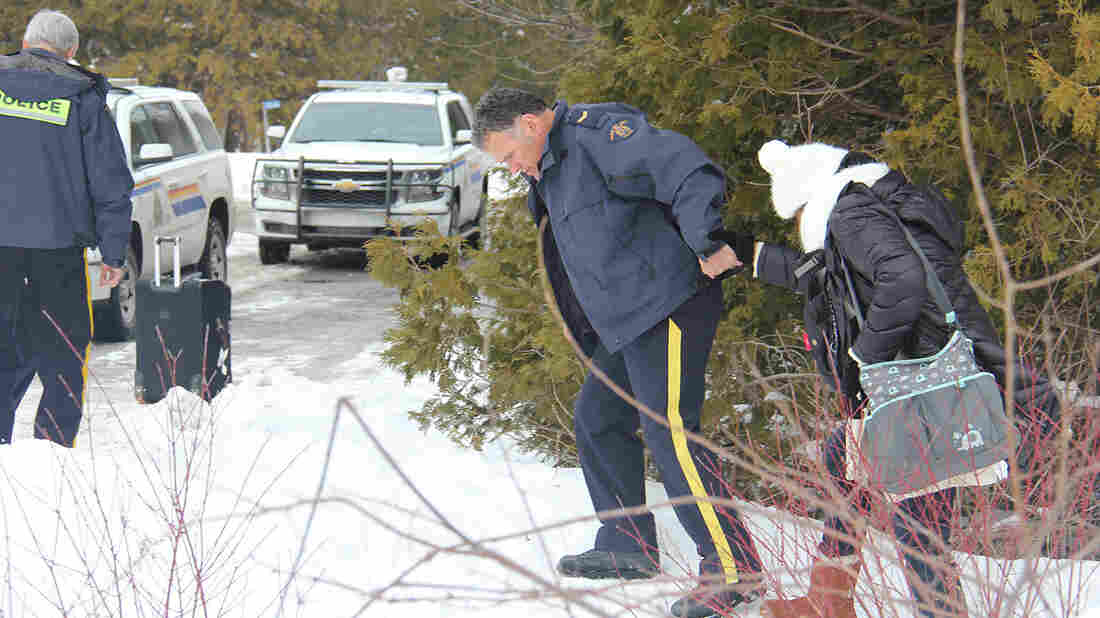 A Canadian police officer offers a hand to a migrant crossing the U.S.-Canada border near Champlain, N.Y., on Wednesday. The Royal Canadian Mounted Police are reporting surges in illegal crossings in Canada in recent months. Kathleen Masterson/VPR hide caption 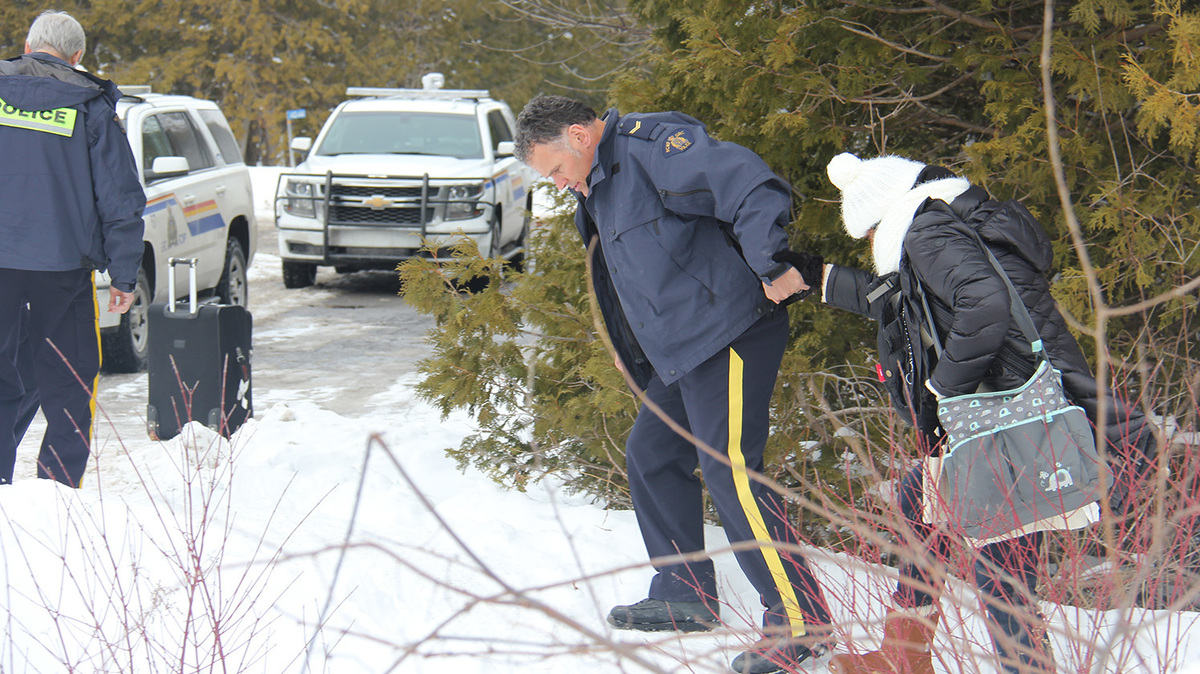 A Canadian police officer offers a hand to a migrant crossing the U.S.-Canada border near Champlain, N.Y., on Wednesday. The Royal Canadian Mounted Police are reporting surges in illegal crossings in Canada in recent months.

The police bring out a child car seat and place it in their cruiser. The woman is arrested, and she and her child are driven away from the border. The whole thing takes about six minutes.

People who work with immigrants in Canada say these border-jumpers would rather be arrested in Canada than live in fear of how U.S. officials might handle their cases.

"There's quite an increase in people walking through illegally," says Cpl. Camille Habel, spokeswoman with the Royal Canadian Mounted Police.

She says that after the Mounties arrest those who cross the border illegally, the police can only detain them for up to 24 hours before either releasing them or presenting them in front of a judge.

"Once that we do all our checks and that we can confirm that they're not a threat to national security, we hand them over to [the Canadian Border Service Agency] who then start the immigration process," Habel says.

Habel won't give any information about the woman and child who crossed into Canada from upstate New York, but officials with the CBSA say that if they determine that she isn't a danger of a flight risk, the agency will release her and her baby. It's then up to a tribunal to evaluate her candidacy for refugee status.

That woman's experience is not unique, though. At least two other families crossed into Canada at Roxham Road on Wednesday, knowingly walking into police arrest.