Accessibility links
With Town Hall Script Flipped On GOP, Will History Repeat Itself? Democrats say the anger at recent GOP town halls reminds them of the same backlash they faced eight years ago with the rise of the Tea Party. Now, Democrats are using that as a blueprint. 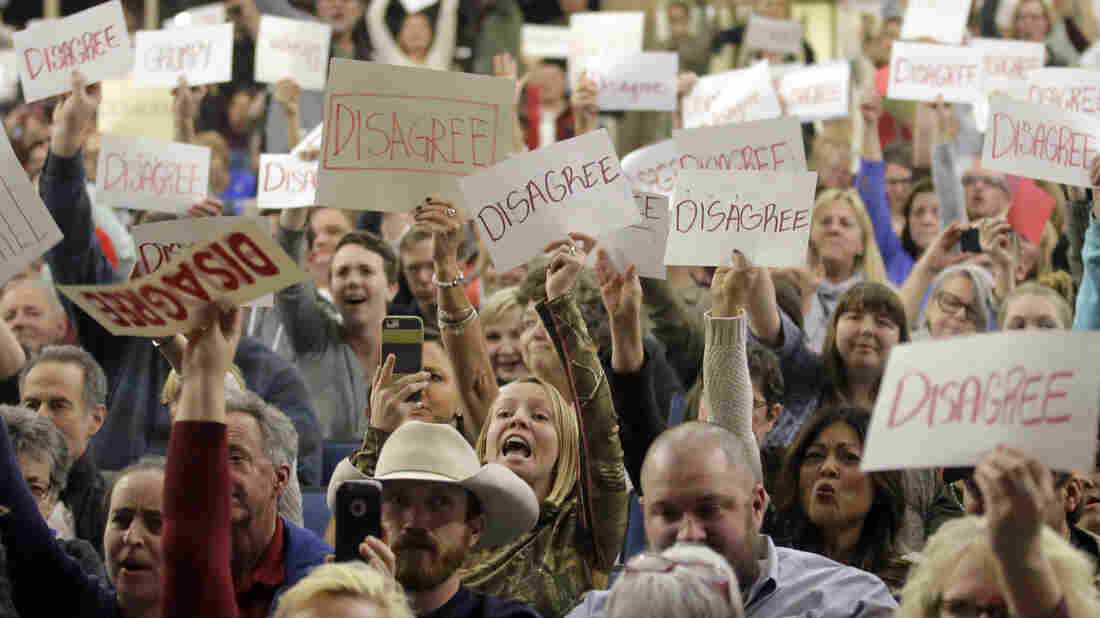 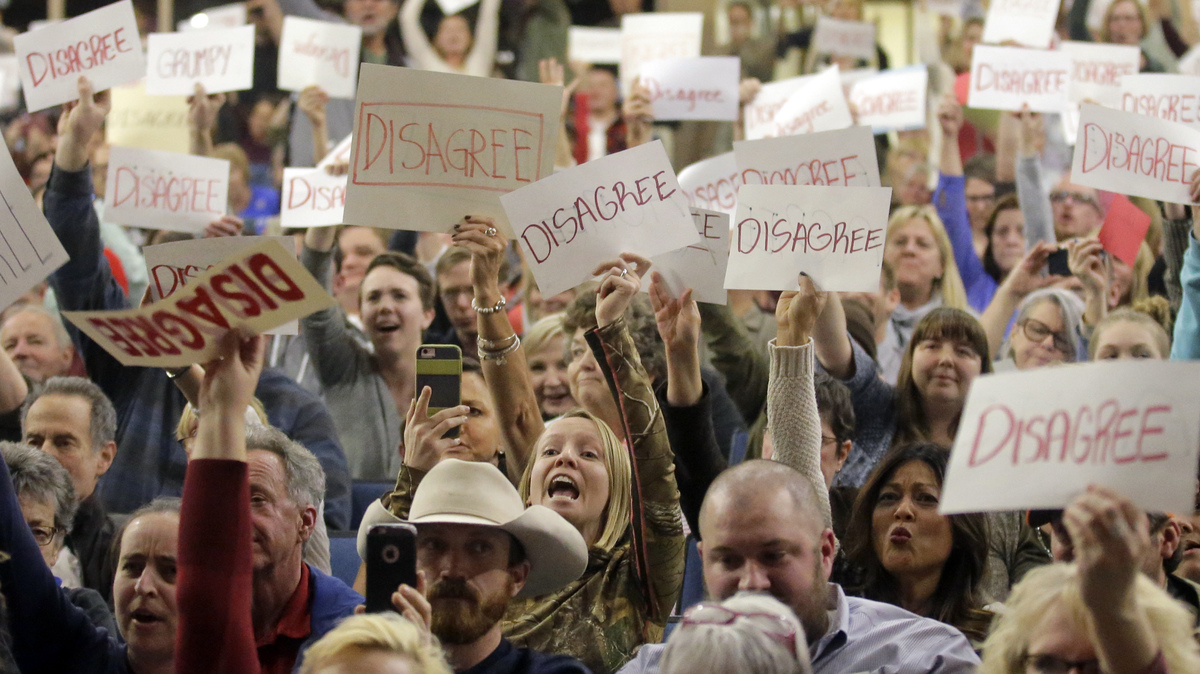 People react to Rep. Jason Chaffetz as he speaks during a town hall meeting at Brighton High School in Utah last week.

It's that energy that exploded eight years ago, birthing the Tea Party movement and helping the GOP take back Congress in the 2010 election. But now, they're finding themselves on the receiving end instead of the giving end.

Last week more than 1,000 people confronted House Oversight Committee Chairman Jason Chaffetz at his town hall in suburban Utah. In Tennessee, now-Budget Committee Chairman Diane Black also faced a frustrated crowd of people concerned over the repeal of President Obama's health care law. And with Congress on recess next week, more contentious town halls could be on the horizon.

Democrats who lived through 2009 say the scenes are eerily familiar.

"A lot of the tactics and a lot of the energy that we're seeing today focused at the Republican Congress in these town hall meetings is more than just reminiscent — it's downright deja vu," said Jesse Ferguson, a Democratic strategist who worked for the party's national campaign committee during the 2010 cycle.

That isn't by accident. An organized online grassroots push called "Indivisible" has helped alert frustrated members of the public on how they can best reach and influence their own representatives through town halls. Democratic strategists say the Tea Party movement was the inspiration and blueprint.

"Let's accept the fact that when citizens get engaged, it changes the course of history. You can disagree with the Tea Party, and I strongly do, but it's hard to claim that those people getting engaged didn't change the course of the American political discussion and what was possible politically," said Ezra Levin, who's now Indivisible's executive director.

Levin, his wife Leah Greenberg, and other former Democratic staffers and activists put some of their thoughts and advice on how to best engage with Congress into a Google document titled "Indivisible: A Practical Guide for Resisting the Trump Agenda." After pushing it out on social media, the guide spread online. Weeks later, the group has a website with more than 14.4 million page views, is registered as a 501c(4), and has more than 7,200 local groups registered.

The first chapter of their guide acknowledges the Tea Party movement — through harnessing the power of local groups magnified by online grassroots organizing:

The Tea Party started as an organic movement built on small local groups of dedicated conservatives. Yes, they received some support/coordination from above, but fundamentally all the hubbub was caused by a relatively small number of conservatives working together.

Allen Boyd is a former Blue Dog Democratic congressman from Florida who lost his seat in the 2010 election. He said he and his colleagues didn't fully grasp the anger behind the Tea Party movement at first.

"I think that we were caught off guard," Boyd said. "We didn't really understand what was happening and the organization behind the coordinated and well-planned out town hall meetings."

It's still a tough climb for Democrats in 2018. Post-2010 redistricting left them with fewer competitive House seats, and they're also playing defense in the Senate with red-state Democrats up for re-election.

But Democrats are optimistic. These uprisings are happening early in President Trump's term — which has been marked by a chaotic first month and historically low approval ratings. The anger eight years ago over the healthcare law didn't fully manifest itself until the August congressional recess in 2009.

The coordination by Indivisible and other groups has some Republicans claiming this is different than the Tea Party. They say the enthusiasm is "astroturfing," or faked grassroots support, along with paid protesters inflating the numbers.

"This is something wholly different, I think. I understand they are using some of the same methodology but it's not the same thing," Rep. Scott Perry, R-Pa., argued to NPR's Susan Davis.

But other conservatives say that Republicans shouldn't dismiss these events so easily, and instead should have the foresight that their Democratic counterparts lacked eight years ago.

"Democrats deluded themselves in 2009 by disregarding the early signs of fierce resistance to their agenda, and paid the price over and over again for their heedless high-handedness. Republicans shouldn't make the same mistake," National Review editor Rich Lowry wrote this week.

One of the key struggles Republicans have now, too, is that there is no consensus alternative health care plan if Obamacare is repealed. Lowry argues that could help diffuse some of the tension, but that some of the GOP's impetus to try and avoid constituents won't end well either way:

The alternative is to look the other way, avoid town halls, and hope that after the repeal passes everything calms down. This was essentially the Democratic tack in 2009, and how did that work out?

Jesse Ferguson, a former top spokesman for the Democratic Congressional Campaign Committee and later Hillary Clinton, said he had made some of the same arguments that the confrontational Tea Party town halls were manufactured to explain away that furor early on.

"Our dismissals turned out to be unfounded," Ferguson said. "And so I think when I see Republicans saying now that this doesn't mean anything, as a political strategist who wants Democrats to be successful in 2018. I hope they continue to believe that every day from now until the next election. Keep deluding yourself into thinking that that there's nothing going on out there and do not change a thing."