Accessibility links
Hundreds Of Whales Get Stranded And Die On New Zealand Shore On New Zealand's Golden Bay, nearly 700 pilot whales have washed ashore and many have died. Scott Simon talks with Andrew Lamason of the New Zealand Department of Conservation about the crisis.

On New Zealand's Golden Bay, nearly 700 pilot whales have washed ashore and many have died. Scott Simon talks with Andrew Lamason of the New Zealand Department of Conservation about the crisis.

This can be a grim time of year on a remote part of the New Zealand coastline called Golden Bay. Whales often get stranded on shore. They're unable to make their way back to sea. And over the last few days, between 600 and 700 pilot whales have been stranded on the beach, the largest number in a century. Roughly half of those whales died. We're joined now by Andrew Lamason of the New Zealand Department of Conservation, who's been involved in the response. Mr. Lamason, thanks very much for being with us.

ANDREW LAMASON: Nice to talk to you.

SIMON: I have to ask you to try and put a picture in our minds of what this must look like to see so many magnificent creatures in such pain.

LAMASON: Yeah, it's quite an awesome sight. It's an area where there's crystal-clear waters and a big, long sweep about 26 kilometers long of golden sand and sand dunes. And then with these - the whole high tide line just covered in these large, black bodies as these pilot whales sort of thrash around, it's very hard to sort of correlate it to anything else in nature.

SIMON: I gather that there were an awful lot of volunteers who came to this remote area to try to help. What can volunteers do, Mr. Lamason?

LAMASON: Well, we have basically two phases of a rescue attempt, and there's a wet phase and a dry phase. And the wet phase, all those with wetsuits available, they get around the whales, they try and support them as upright as they possibly can, let the tide come in and then float them off. And then and the last stranding we had, we formed a large human chain to try and make a barrier to prevent those whales from turning around and swimming back in and re-stranding. That's the wet phase, and that's the sort of more glamorous and exciting bit.

But we have a huge demand on people to work through the dry phase, and that's when the whale's fully beached. And so there's - they're completely stranded. There's no water around them. And we get out there and we get old sheets off beds and cover all the whales and then bucket water onto them, avoiding their blowholes and keeping away from their tails, which can give a nasty blow, and then try and keep them wet as long as we can. And that can be six, seven, eight hours out in the sun and the wind, waiting for that tide to come back again and then get them back out into sea.

SIMON: What's it like, Mr. Lamason, to see one of these whales up close, struggling for breath, struggling to live?

LAMASON: It's terrible. It's terrible. It's an incredibly emotional thing to go through. You know, I find it difficult. You're going out and you see these beautiful animals. My partner was out there working with - trying to refloat a mother whose calf had died. And, you know, we're parents and Kimmy (ph) was really struggling with it.

She's going, this - you know, this mother, she can't leave her calf. We can't get her to go out. And - but you can't be trying to drag out a dead baby as well. Another friend had the exact opposite. The mother had died and the calf was alive and trying to work out how we can save this calf and get it out. And as you can imagine, that is - it's about as hard as it comes.

SIMON: Oh, gosh. Mr. Lamason, do we know why the whales do this?

LAMASON: We don't know. And there's a lot of theories around. But if you had to design a piece of landscape to capture whales, Golden Bay is pretty much perfect. It's a - quite a closed-in bay. It's got this large spit sweeping around, and the seabed out from there is very shallow for quite some kilometers. And there's a great chance that these whales were coming in here to feed and have made a poor choice about how close they can get in.

SIMON: And is there anything human beings can or should do to try and help the whales?

LAMASON: Yeah, that's an interesting question. When these whales die, they actually initiate an ecosystem around them and it brings in a lot of wildlife that wouldn't necessarily be around. So people are saying, well, why don't you get out there and stop them stranding in the first place? Well, as I mentioned earlier, they're relying on this area for food. It'll be a little bit like closing the supermarket because you're worried about the shelves falling on people. They need to get in there. And if some of them die, well, that is - that's very sad. But also, there's a lot of other animals that make - you know, take advantage of their carcasses as well. So it's a - it's an interesting question.

SIMON: Andrew Lamason of the New Zealand Department of Conservation. Thanks so much for being with us, sir.

LAMASON: Great. You're welcome. Thanks for chatting. 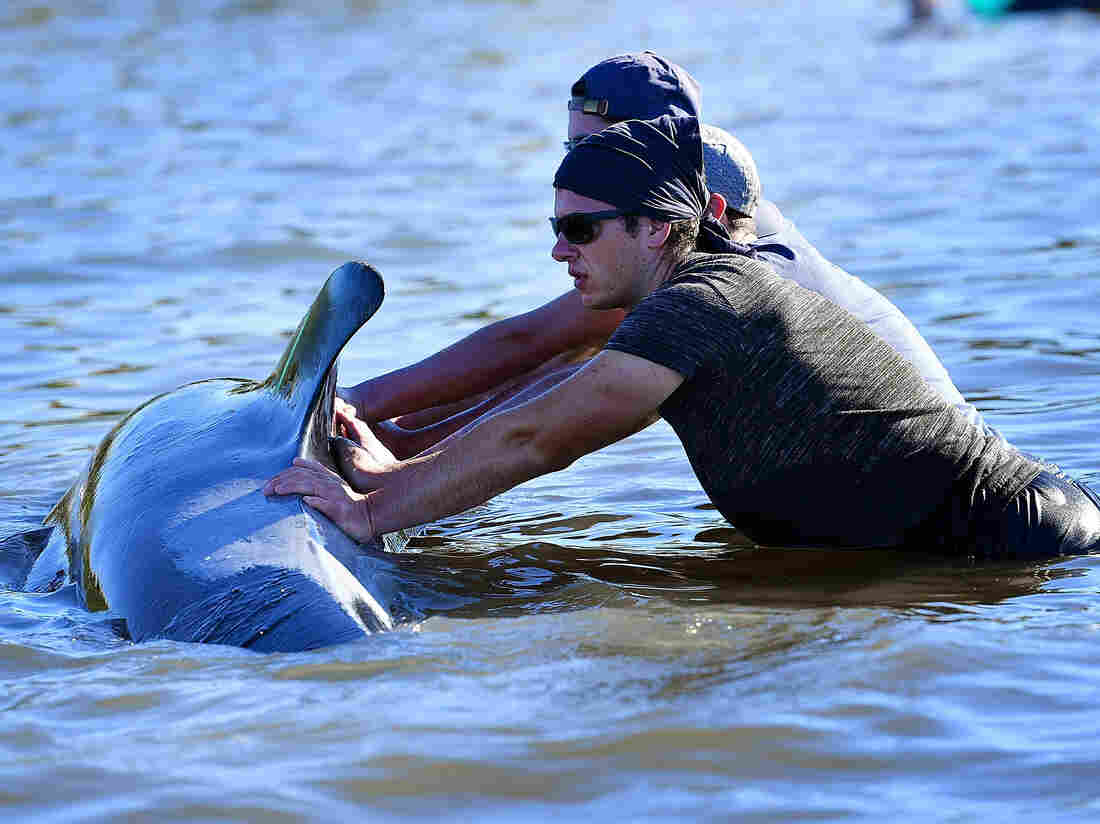 In a photograph taken Saturday, volunteers prop up a pilot whale at Farewell Spit in New Zealand. Overnight, more than 200 of the stranded whales returned to the sea. Marty Melville/AFP/Getty Images hide caption 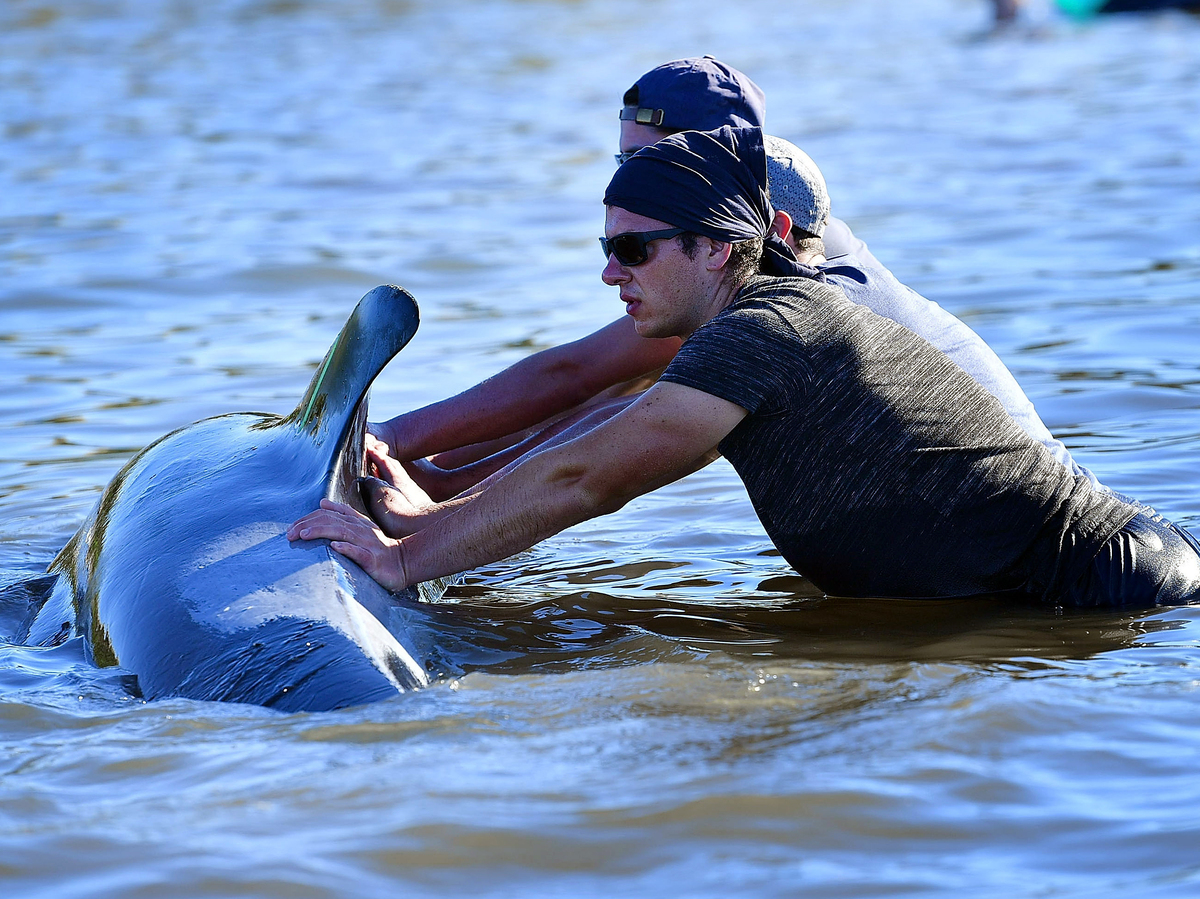 In a photograph taken Saturday, volunteers prop up a pilot whale at Farewell Spit in New Zealand. Overnight, more than 200 of the stranded whales returned to the sea.

It has been a week of heartbreak on New Zealand's Farewell Spit, with an unexpectedly happy twist.

In two separate mass strandings, more than 650 pilot whales beached themselves on the thin strip of land — and over 350 of those died there over the past few days. When volunteer rescuers left the beach for the night Saturday, hundreds of survivors from the second stranding remained ashore.

Then something curious happened: When the people returned Sunday morning, almost all the surviving whales were gone. All but 17 had left the beach and returned to the waters of Golden Bay overnight.

"We had 240 whales strand yesterday in the afternoon and we were fearful we were going to end up with 240 dead whales this morning," Herb Christophers, a spokesman for New Zealand's Department of Conservation, told Reuters.

"But they self-rescued, in other words the tide came in and they were able to float off and swim out to sea."

At high tide Sunday, volunteers managed to send the remaining 17 survivors back to sea. Project Jonah, a marine conservation group helping to lead rescue efforts, said the 17 whales had rejoined the large pod of more than 200 whales about a mile offshore.

It was a remarkable reversal of fortune. On Saturday, New Zealand's Department of Conservation had put out an urgent call for help, but by Sunday, Project Jonah announced that there would be no more need for volunteers.

The day's good news offers a happy end to a story that at times seemed unrelentingly tragic.

The initial stranding, discovered earlier in the week, had left more than 400 pilot whales on Farewell Spit, a skinny beach that arcs for miles from New Zealand's South Island into the sea. Though the area is notorious for whale strandings, few people had seen one of this scope before; it was the third largest on record in the country.

Experts posit a range of reasons for why mass strandings like these happen, from disorientation caused by sonar blasts and odd land masses to a desire to protect injured members of the pod. But no precise cause is known.

At any rate, hours after volunteers had sent some 100 of the initial survivors back to sea Saturday, a separate large pod of another 200 whales came ashore.

It was a tough sight for many of the volunteers.

"People seem to have an emotional attachment to marine mammals," Christophers told The Associated Press. "They've been singing songs to them, giving them specific names, treating them as kindred spirits."

After Sunday's success, many of the volunteers gathered to sing a waiata, or a traditional Māori folk song, in honor of the newly departed whales.

The work is not over, however. Even after whales have escaped their stranding, they occasionally will return to beach themselves again unless prevented.

And then there is the issue of the hundreds of whales that died on shore earlier in the week. Andrew Lamason, another spokesman for the DOC, told the AP they may tether the corpses to stakes in the shallow water to prevent them from floating into bays near people's homes.