Accessibility links
5 Questions After A Chaotic Week In The Trump White House President Trump is governing the way he campaigned — moving from "chaos candidate" to "chaos president." It might be possible to stabilize things, but Trump doesn't seem to want that.

5 Questions After A Chaotic Week In The Trump White House

5 Questions After A Chaotic Week In The Trump White House 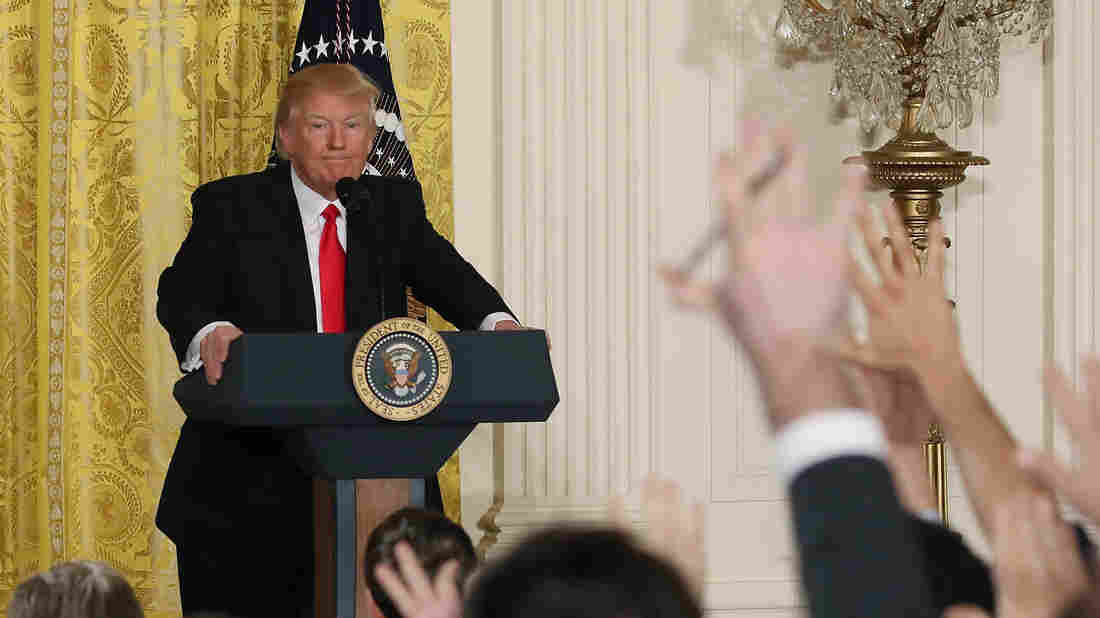 President Trump takes questions from reporters during a news conference Thursday. His supporters like it when he criticizes the media. Mark Wilson/Getty Images hide caption 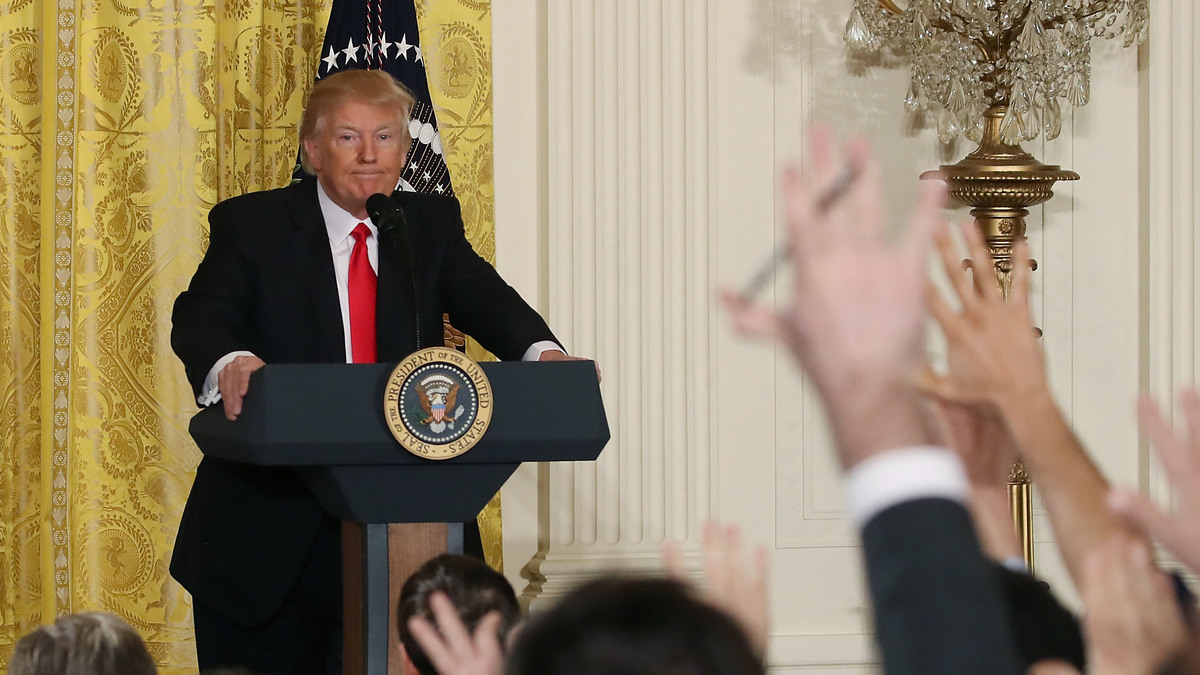 President Trump takes questions from reporters during a news conference Thursday. His supporters like it when he criticizes the media.

What a week it was for Donald Trump.

As if everyone didn't know this already — Donald Trump is governing just the way he campaigned. He's a one-man band with an impulsive, seat-of-the-pants management style. As his former rival Jeb Bush correctly predicted way back in the primaries, he's the "chaos candidate" and now the "chaos president." While it's too soon to subscribe to some of the hyperventilating headlines about a "crisis" in the West Wing, there's no doubt Trump's has been the most chaotic start to any administration in modern times.

1. Has Trump done more in one month than any other president?

Maybe — but not exactly the way he means.

This week started with Trump firing Mike Flynn, his national security adviser, after a news story that Flynn had lied to Vice President Mike Pence about what Flynn said to the Russian ambassador. (Trump had known about that for almost two weeks and failed to inform Pence.) The week ended with the news that the man Trump chose as his new national security adviser, retired Vice Adm. Robert Harward, had turned him down. Ouch. In between, there was the withdrawal of Trump's nominee for labor secretary, and the announcement that three congressional committees were investigating repeated contacts between Trump campaign aides and Russian intelligence — including during the time period when U.S. intelligence agencies say Russians were interfering in the U.S. election.

Those were the big things. There was also a myriad of smaller controversies, like the repeated and false insistence by Trump that millions of people voted illegally for his opponent, and the fights he keeps picking with foreign leaders, intelligence agencies and department stores. Then there was a press conference for the ages, in which Trump insisted he wasn't "ranting and raving. I love this," he said. "I'm having a good time doing it."

And there was one more thing. Gallup has Trump at a 38 percent approval rating, the lowest ever for a president this early in his term.

2. Is this what Trump voters wanted?

Trump's performance at his news conference — at times defensive, aggrieved, wheedling, frustrated and combative — thrilled his hardcore supporters. They love it when he takes on the press. By the end of the week he was tweeting that the media is "the enemy of the American People."

Still, Trump is losing some support. Gallup and Pew — two respected polls — have him around 40 percent approval or below. He's holding steady with his core white non-college-educated supporters, but his support from white college-educated voters is down since Election Day. Those are the voters who voted for Trump even though they had reservations about his temperament and qualifications.

They were willing to give him a chance to disrupt the system because the system wasn't working. But is this the kind of disruption they had in mind? They wanted him to "drain the swamp," vanquish ISIS, and above all, bring back jobs. But he's been talking about Russians instead of renegotiating NAFTA; promising to punish "low-life leakers" instead of proposing tax reform; and fighting with the media instead of unveiling his infrastructure program.

3. Is this what Republicans on Capitol Hill wanted?

After Thursday's news conference it was hard to find a congressional Republican who thought Trump has helped himself. Republicans have a very compartmentalized view of Trump. They love that after eight long years of Obama they finally have a president who will sign their bills. For that alone, they're happy to ignore the tweeting, the obsession with his vote totals, and the flirting with Vladimir Putin. But if Trump's approval ratings keep dropping to the point where he looks like he'll be a drag on their re-elections, that forbearance might disappear.

Although Republicans in Congress are intimidated by Trump's tweets and his hardcore supporters — who make up a large share of the party's base — Trump doesn't have a real constituency on Capitol Hill the way Mike Pence does. Pence is a former member of House leadership and there are plenty of Republicans who would much rather have him in the Oval Office.

4. Is it a finely tuned machine or a dysfunctional mess?

Trump says everything is running just fine, but Republicans on Capitol Hill say they have no idea who's in charge. At the press conference, Trump said his White House Chief of Staff Reince Priebus is "putting out fires" when Priebus would rather deal with tax reform and health care.

But the character of any White House is set by the personality of the president. We've gone from no-drama Obama to chaos-all-the-time Trump. This worked for Trump when he was a reality TV star. He would pit one contestant against another, creating drama and keeping the spotlight on himself.

Now it looks like there's no one in the White House to tell Trump when something is a bad idea. The news conference was reportedly his own idea, and it must have been a cathartic experience for him after weeks of complaining about how ineffectively his surrogates were defending him on television. So he decided to do it himself.

When Trump says he'd run the country like a business, was this chaotic week what he meant?

Trump is famous for seeking lots of advice — from almost anyone. He's gone table to table polling diners at Mar-a-Lago about who he should appoint to the Cabinet. And he's known for agreeing with the last person he talked to.

5. Can this ship be stabilized?

Other administrations started chaotically, though probably not as dizzyingly as this one.

Bill Clinton had a famously rocky start but went on to pass NAFTA and welfare reform — and with the country at peace and prosperous, he won re-election.

Trump has inherited a good economy that's improving by the day. If he can avoid a crisis like Ebola or Hurricane Katrina and get a seasoned hand or two in the White House, he might be able to move past this rough patch.

But there is nothing we've seen so far that shows he actually wants that. His first song at the inaugural ball sums up what seems to be Trump's ambition — he'd rather do things "My Way" — for better or for worse.