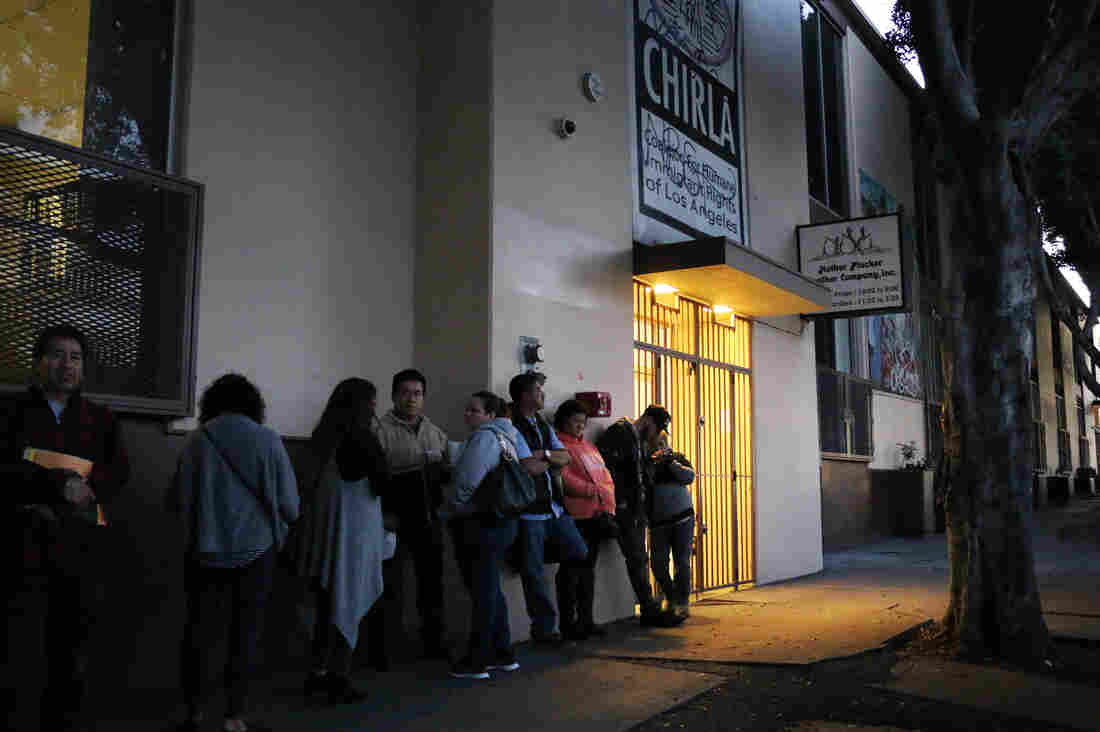 Lines for citizenship and other immigration services have been forming as early as 6 a.m. outside the office of the Coalition for Humane Immigrant Rights of Los Angeles. Parker Yesko/NPR hide caption 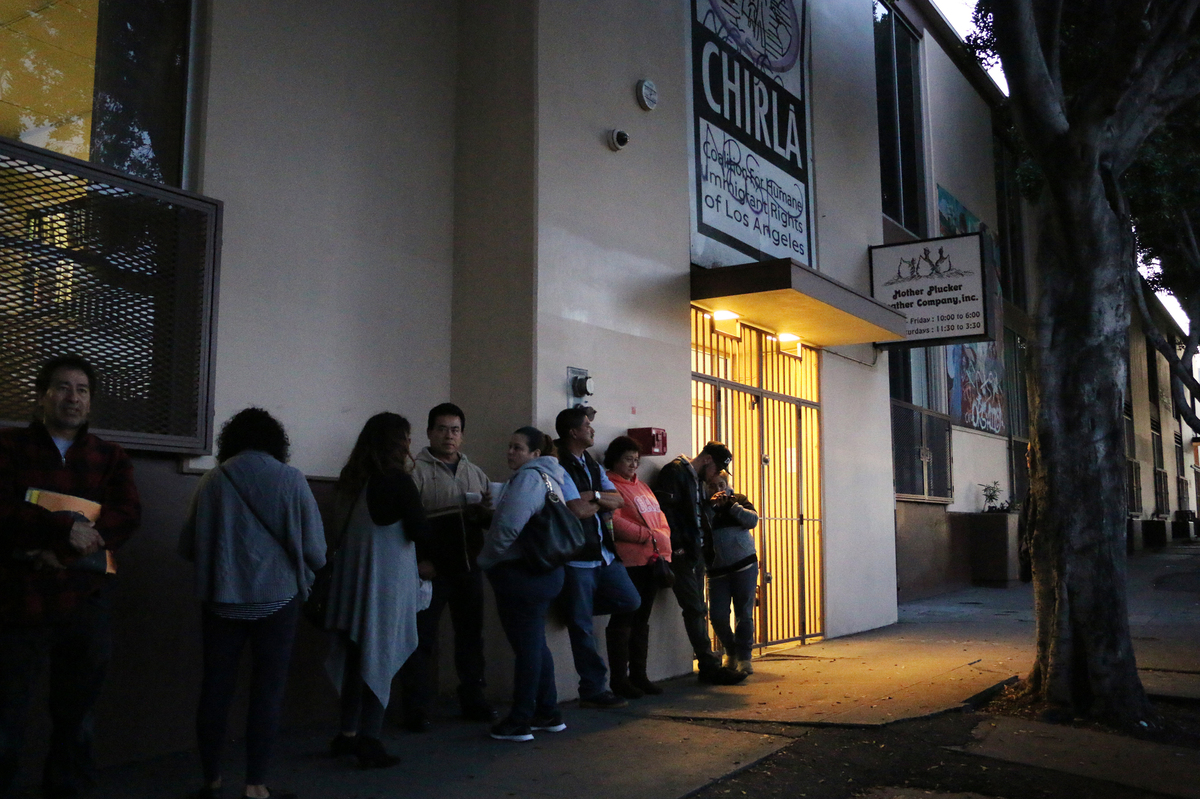 Lines for citizenship and other immigration services have been forming as early as 6 a.m. outside the office of the Coalition for Humane Immigrant Rights of Los Angeles.

"It's a good assumption," Homeland Security Secretary John Kelly said at the Munich Security Conference on Feb. 18, that green card holders — or legal permanent residents — will not be affected by the revised travel ban Trump is expected to announce this week.

But Alondra Juarez, a green card holder in Los Angeles, says she is not taking any chances. On a recent morning, she was one of dozens lined up outside the office of the Coalition for Humane Immigrant Rights of Los Angeles, or CHIRLA.

She had come before, but she turned back after she saw long lines.

"I want to say this is my sixth attempt," said Juarez, a 29-year-old social worker who has lived in LA for more than two decades.

She heard that CHIRLA was offering free help with citizenship applications during Trump's first 100 days in office. Juarez says she was troubled by Trump's executive order that temporarily banned travelers from seven predominantly Muslim countries.

"The Muslim ban was an eye-opener because if you do ask a lot of Latinos with resident cards, they'll tell you, 'OK, first it was Muslims, and next, who's on the list? The Latinos, Hispanic population,' " she said. 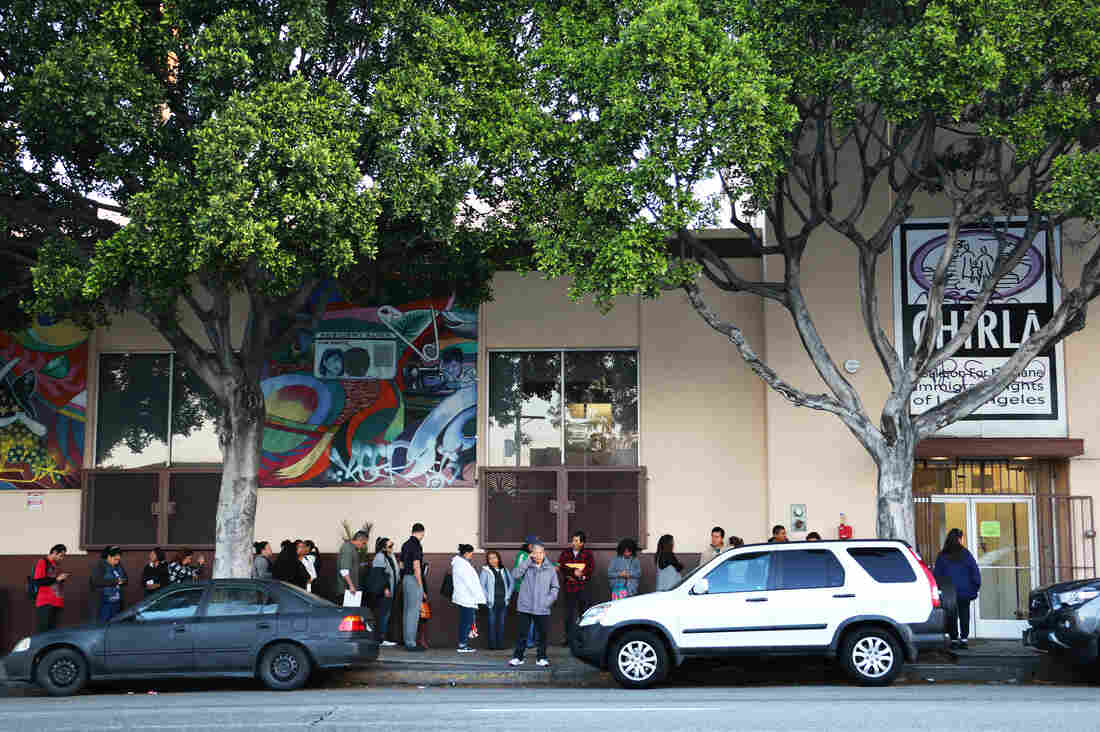 The Coalition for Humane Immigrant Rights of Los Angeles is offering free assistance with citizenship applications through the first 100 days of the Trump administration. Parker Yesko/NPR hide caption 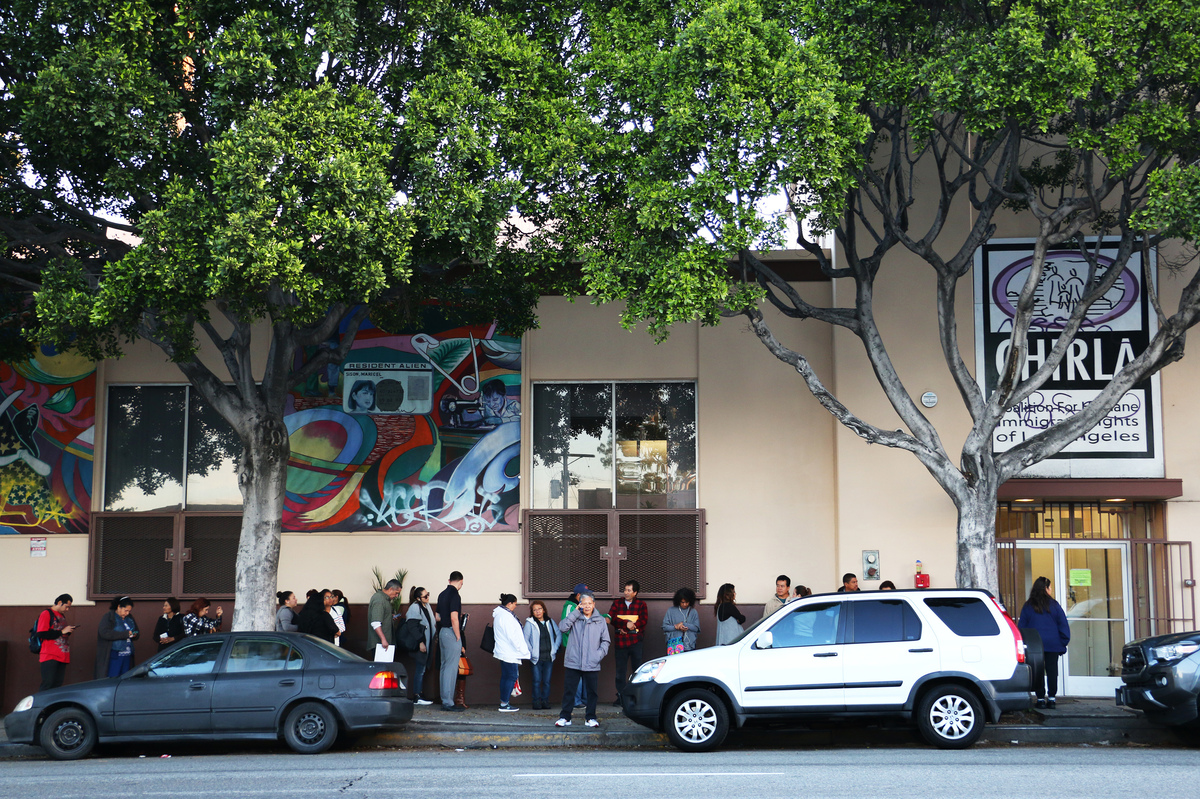 The Coalition for Humane Immigrant Rights of Los Angeles is offering free assistance with citizenship applications through the first 100 days of the Trump administration.

Green card holders can apply for citizenship after staying in the U.S. for at least five years. But historically, nearly 40 percent of those eligible for citizenship — or about 10 million people — choose to keep their green cards, according to the latest estimate by the Pew Research Center.

While the courts have put the travel ban on hold, the uncertainty of Trump's immigration policies is keeping immigrants on edge. Many green card holders are now flocking to apply for citizenship, including Vera Mayorga.

Standing on the sidewalk outside CHIRLA's office, she said her mother, Dina, is concerned about more changes in immigration policy and feels that getting citizenship is the best insurance against being deported back to Guatemala.

"She doesn't want to go back," Vera said.

"This is scary because here is my life," Dina added. "My daughter's going to school here."

After CHIRLA staffers opened their office doors, the Mayorgas and other green card holders streamed inside to start filling out intake forms. There were so many people crammed into the room that more chairs had to be brought in. Smiles broke across nervous faces as a staffer welcomed them in Spanish.

"We used to see two to three people a week seeking citizenship services. Now we are seeing between 30 and 50 people a day," says Jorge-Mario Cabrera, CHIRLA's director of communications.

He says his organization hopes this recent rush for citizenship will eventually result in more new voters at the polls.

The right to vote and a U.S. passport are some of the top incentives for applying for citizenship. But there are also plenty of barriers that discourage some green card holders, including misinformation about the application process.

"What we want is to provide folks with the right information so that they don't end up at notarios and fraudulent attorneys that will take their money, wreck their lives and run away from it all," Cabrera says.

In the past, he says, some people have been intimidated by having to pass an English test and an exam about U.S history and government. Another challenge has been the fees, which can total as much as $725 to file the application for naturalization and to pay for the required fingerprinting and other biometric collection.

"Not everyone understands that if you're indigent or low income, you can get a waiver of that filing fee," Wernick explains.

Presidential election cycles generally boost the number of citizenship applications. Last year was no exception. Through September, application numbers were up more than 24 percent over the previous fiscal year.

Amir, a green card holder from Iran who lives in California's Orange County, submitted his application for naturalization a few weeks before Trump's inauguration

He asked NPR not to use his last name because he is worried that speaking out might affect his application.

Still, the confusion brought up a lot of questions for Amir.

"What if I happened to be outside of the country and wanted to come back?" he says. "This is home. I mean, I own a house here. I have no other place to go. I'm here as an asylee and as a gay man. There's not a lot of welcoming in Iran for me."

Meanwhile, Amir hopes he will soon be able to take his oath of allegiance and become a U.S. citizen.

With the surge of applications, the wait may be longer than usual.