Accessibility links
Book Review: 'The Mercy Of The Tide,' By Keith Rosson Zinemaker and designer Keith Rosson's debut novel is set in a small Oregon town in the 1980s, where the rain pours down, jellyfish rot on the beach — and a strange supernatural force is on the move.

Adolescence Isn't The Only Horror In 'The Mercy Of The Tide'

Adolescence Isn't The Only Horror In 'The Mercy Of The Tide' 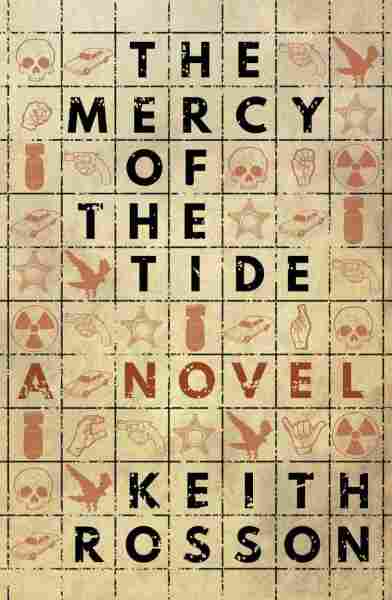 The Mercy of the Tide

Title
The Mercy of the Tide
Author
Keith Rosson

Riptide, Ore., is a place to get lost in — not that you'd necessarily want to. It's 1983, and the sleepy coastal town is starting to get weird: Mutilated animals are turning up on the beach at Wolf Point, and the discovery of the skeleton of a Native American girl from over a century ago sparks something even stranger. Some kind of supernatural force appears to be on a rampage in Riptide, although its residents have plenty of man-made horrors to be concerned about as well. A recent, fatal car accident has cast a pall of tragedy over the town. The echoes of America's crimes against its indigenous peoples still haunt the area. And the Cold War is reaching critical mass, the threat of a nuclear holocaust looming on the horizon.

The Mercy of the Tide is the debut novel by Keith Rosson, who's better known as a zinemaker and graphic designer in the punk scene. Previously, his DIY background has only barely hinted at what he might be capable of as a novelist, but Mercy leaves no doubt: Rosson is a talent to be watched, and Riptide is one of the most immersive fictional settings in recent memory. The town is ripe with "rainwater gurgling in the gutter" and "the distended membranes of dead jellyfish washed ashore." Like the flotsam that litters Riptide's beaches, secrets and omens begin to wash up, accumulating and decaying. But Rossom smartly offsets this sumptuously oppressive atmosphere with the punch of '80s pop culture — Jordache jeans, Garbage Pail Kids, and The A-Team — which coalesces into a retro-surreal phantasmagoria rather than glib nostalgia.

Rosson is a talent to be watched, and Riptide is one of the most immersive fictional settings in recent memory.

Rosson dwells on his setting, but he doesn't skimp on his characters. If anything, their psychic landscapes are even more fraught with darkness than Riptide's physical one. High school senior Sam Finster and his nine-year-old sister Trina are reeling from the death of their mother Melissa in a car wreck that also killed the wife of the town sheriff. The cause of the collision is still blurry, and that unresolved causality and grief weighs heavily on the survivors. Sam is tackling the tribulations of adolescence in the '80s, complete with unrequited crushes, teenage rebellion, and — this being Rosson's creation — punk rock. Trina, deaf since birth and uncannily precocious, has developed an obsession with nuclear warfare that spills over into her daily life. And Nick Hayslip, a Vietnam vet and the sheriff's deputy, hauls the tatters of his broken life through the sandy streets of Riptide — a state of existence that's sharpened to a knife's edge as he investigates the macabre goings-on around town.

The mystery at the heart of Mercy is soon overshadowed by the web of loss, grief, and consequence among the characters. Even the secondary players, from Sam's rebel confidante Toad to the apocalyptic zealot Joy Lyley, are etched vividly and sympathetically. It's still a horror story, but it's so much more: a coming-of-age tale, a family drama, a crime procedural, and an eerie piece of American magical realism. It even reveals itself to be an alternate-history yarn, in a subtle way that never fully manifests until the end of the story — just as everyone washes up on the beach at Wolf Point like carefully orchestrated driftwood caught in the ebb and flow of fate.

One thing the book is not as successful at is its portrayal of Native American culture, history, and mythology, which feels both stale and underdeveloped. In particular, Rosson's invention of the fictional Tumquala tribe, rather than using an actual one, comes across as a relic of the less enlightened '80s, a case of literary nostalgia ill serving contemporary sensibilities. But it's a small flaw in an otherwise absorbing story — a beautifully gloomy meditation on how lives tangle around each other, then tighten in the face of terror — and how modern destructive evils displace the ancient ones embedded in our bones.