Accessibility links
A Student's Perspective On Mississippi: Beautiful, Engulfing And Sometimes Enraging In 1962, the University of Mississippi was at the heart of the desegregation battle. More than 50 years later, a junior on campus talks race, belonging and his sense of pride in Mississippi. 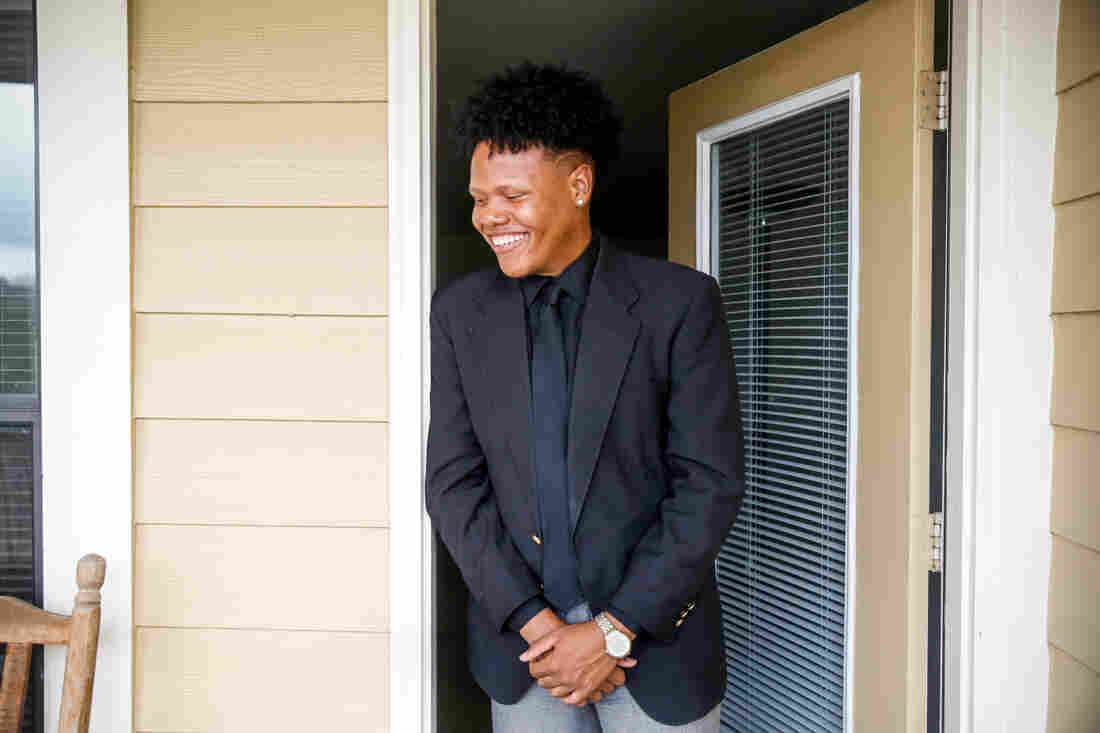 Terrence Johnson, a junior at the University of Mississippi, poses for a portrait outside his apartment in Oxford, Miss. Elissa Nadworny/NPR hide caption 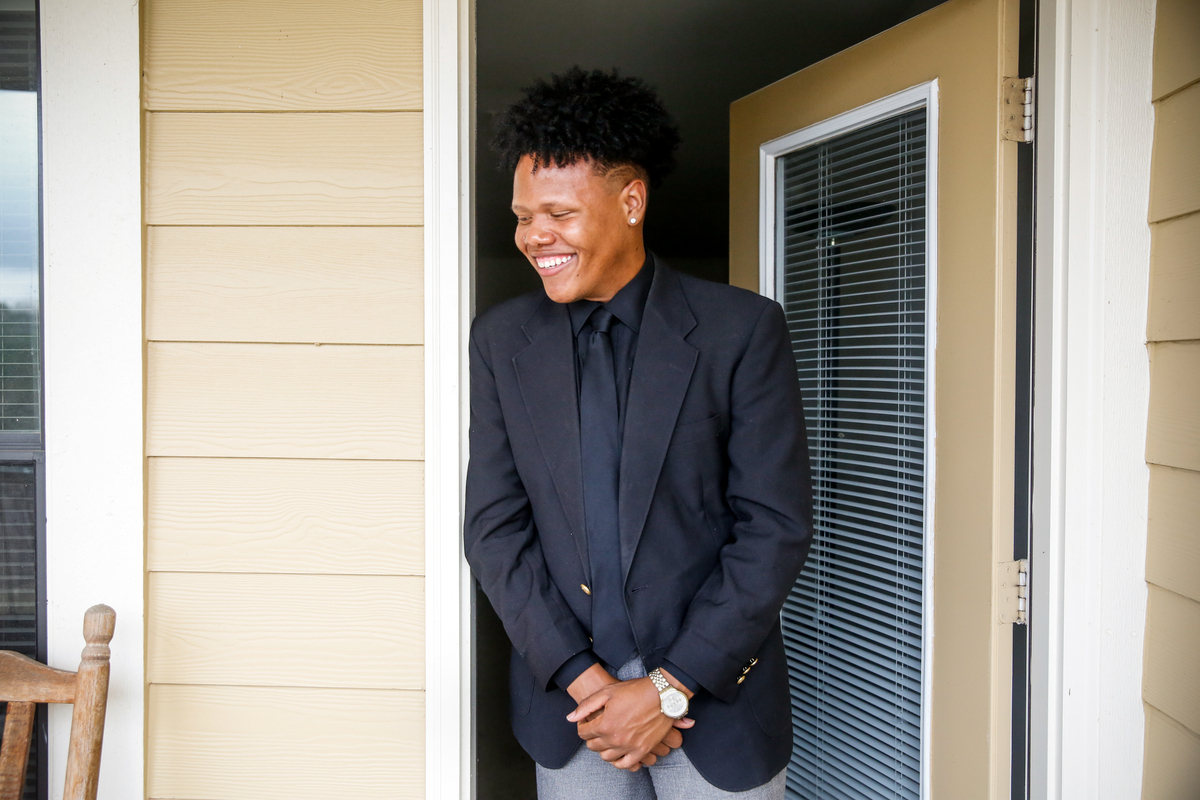 Terrence Johnson, a junior at the University of Mississippi, poses for a portrait outside his apartment in Oxford, Miss.

Every day on his way to class, Terrence Johnson walks by a bronze statue and thinks about history. The statue depicts James Meredith, who in 1962 became the first African-American to enroll at the University of Mississippi.

"He transcended so much," says Johnson, a junior. "The fact that he had the will to integrate a university like this in Mississippi that has such a rich and chaotic history ... that will always be with me."

Johnson's a journalism major, with a minor in African-American studies. And he's a leader here: His schedule is packed with tutoring, mentoring, writing for the newspaper. He's active in the LGBT community and in black student groups, and sings with several choirs.

We're here in Oxford, on this historic campus, to talk about how race and history influence college life today.

We sat down to talk with Terrence Johnson behind the Lyceum, the administrative building that was at the center of the riots that erupted when James Meredith arrived on campus in 1962.

Thousands of rioters battled federal marshals at the heart of campus. When the marshals couldn't control the white mob, President John F. Kennedy called in the U.S. Army. Two people were killed in the rioting, and hundreds more were wounded.

The ugly fight left a scar on the University that is still felt now, 55 years later, when blacks make up roughly 13 percent of the student population.

The statue of Meredith was erected on the spot we're sitting in 2006. He's shown mid-stride, about to walk through an open door.

"He was carrying the torch for so many like myself," says Terrence Johnson.

In recent years, Ole Miss has tried to refashion its image and shed some of its past ways. 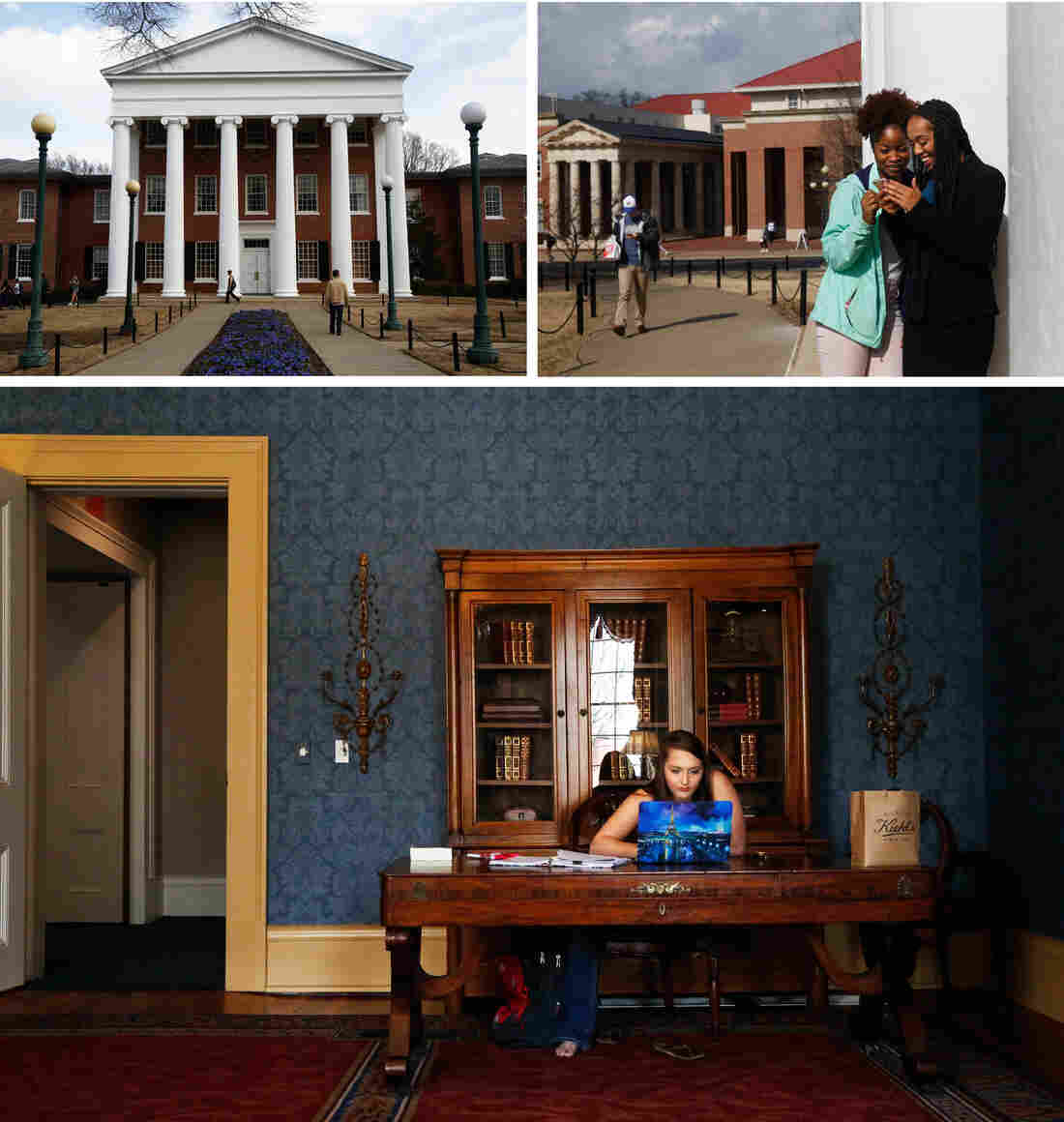 Scenes from campus. (Top left) The Lyceum, the administrative building that was at the center of the riots that erupted when James Meredith arrived on campus in 1962. (Top right) Students Gabrielle Murray and Breanna Lomax chat on campus. (Bottom) Jordan Potts studies in the Lyceum. Elissa Nadworny/NPR hide caption

Last year, the university dropped the tradition of playing "Dixie" at football games. And there's now a plaque in front of the Confederate monument, which references slavery and the university's divisive past. Some have called for the university to drop the use of the nickname "Ole Miss" itself: Originally, that was how slaves would refer to the wife of a plantation owner.

Terrence Johnson was a senior in high school at the time, about to enroll at Ole Miss.

"It threw me off for a minute," he recalls. "I was just like, 'It's two thousand and what? You know, what year is it again?' It will always baffle me."

For a moment he considered going somewhere else. But, he adds, "I didn't feel like it was going to, at the end of the day, derail me from what I wanted to do." 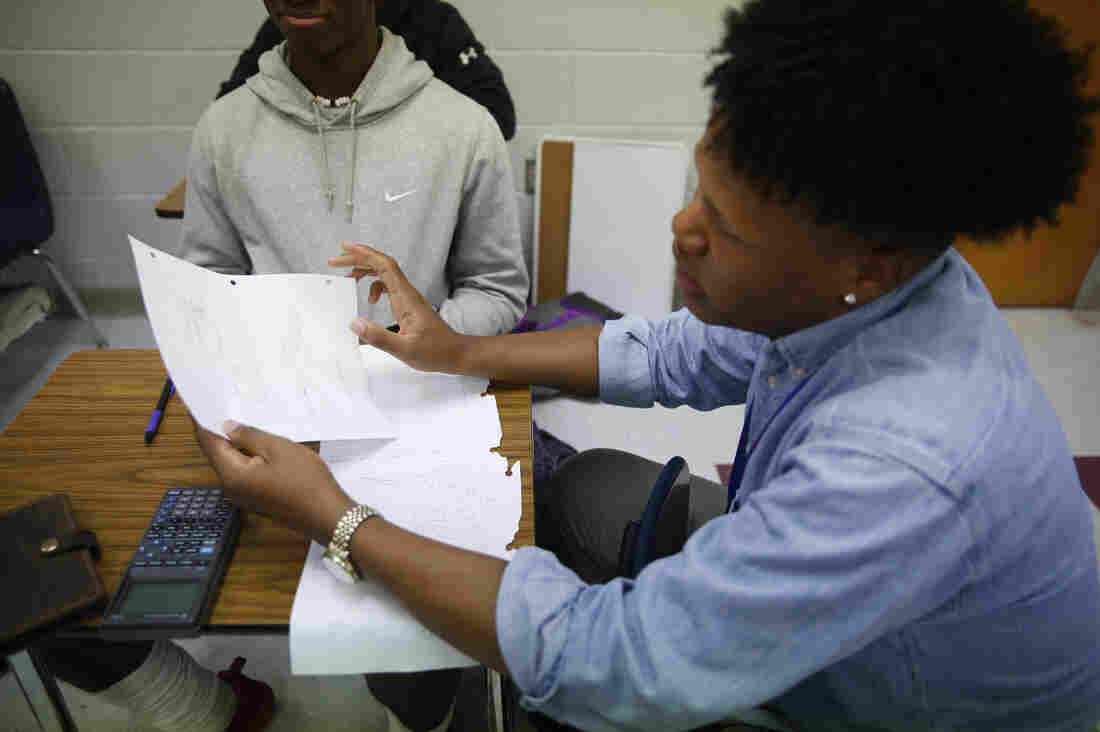 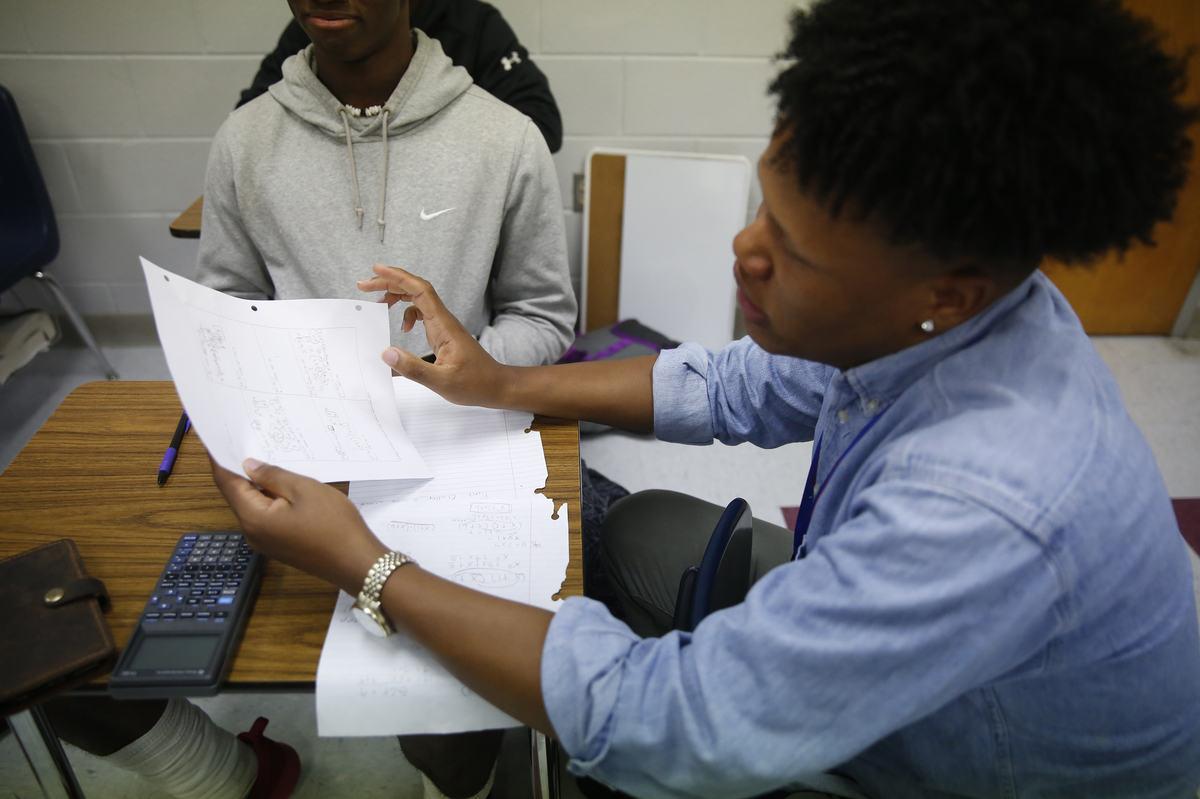 That determination has taken Terrence far. He comes from the tiny town of Shuqualak, population about 500, out in the countryside in eastern Mississippi.

"I knew Shuqualak was small," he says, "but no one ever made me feel small, you know?"

When Johnson graduates next year, he'll become the first in his immediate family to complete college. His father is a welder; his mother works as a phlebotomist.

He grew up in a single-wide trailer. "It is a palace!" he says, with clear affection. "It's safety. It's a haven. It is relaxation. It is blessings! It's good music on Sunday and Saturday mornings, it's good fried chicken on Tuesday nights. It is a true palace."

When Terrence graduated from the prestigious Mississippi School for Mathematics and Science — a high school for gifted students — he saw his father cry for the first time ever. Seeing his son succeed means the world to his dad, Terrence says. His parents would always stress, "You gotta go be great."

Now he's about to fulfill those ambitions — in a place where the legacy of race and history are still close to the surface.

In classes, he notices that black students will sit on one side of the classroom; whites on the other. "It just happens," he says. 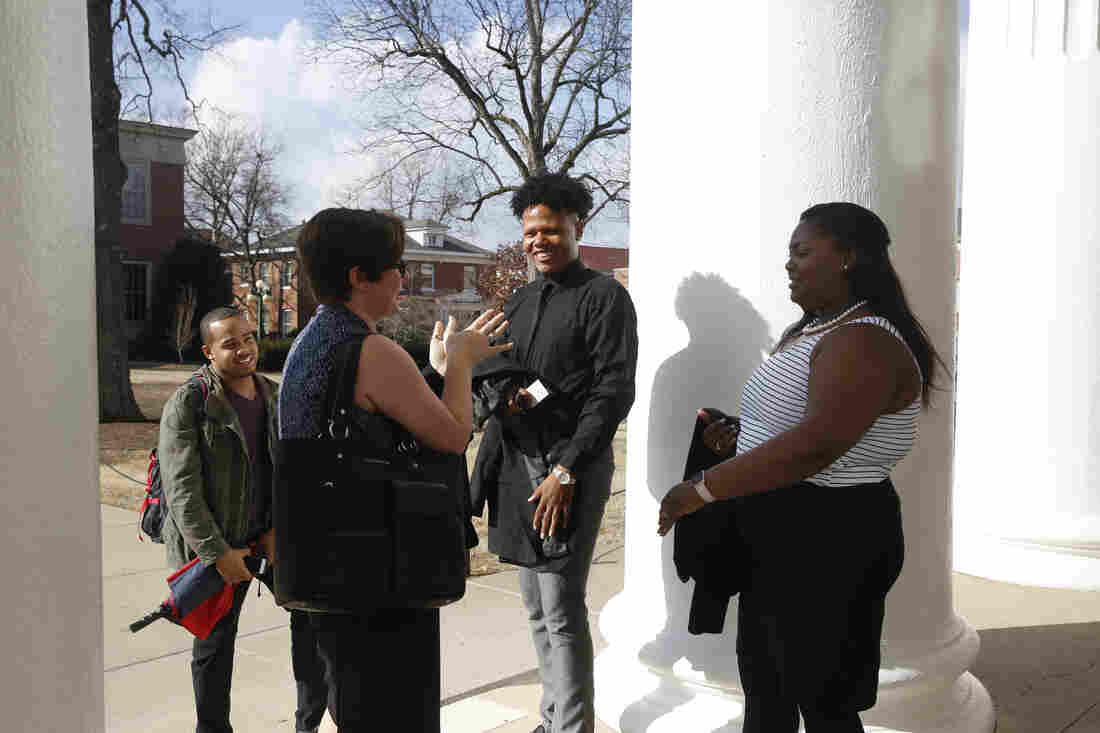 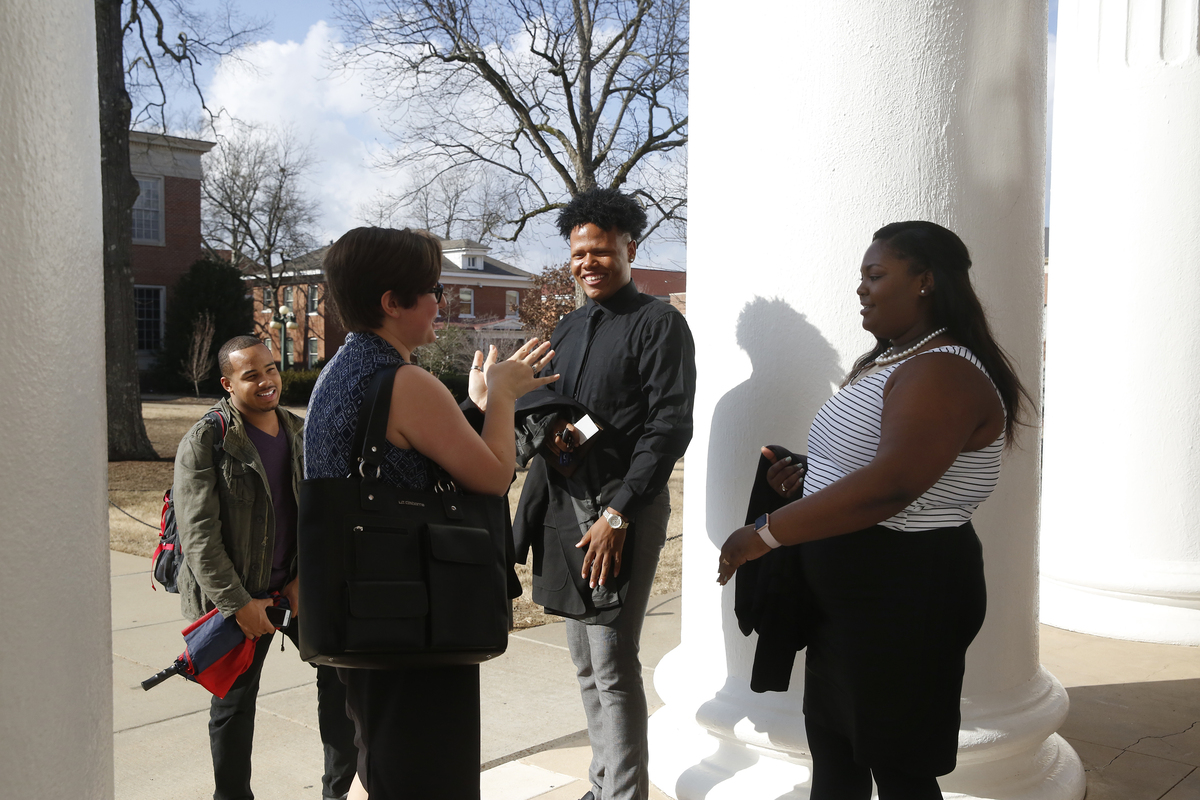 Johnson talks with his friends on campus.

I walk with Terrence Johnson inside the archway that stands in front of James Meredith's statue. Etched on the wall is a quotation from Meredith's memoir, written in 1966: "Always, without fail, regardless of the number of times I enter Mississippi, it creates within me feelings that are felt at no other time. Joy ... Hope ... Love."

But it's telling that the quotation has been sanitized: whitewashed, if you will.

What's not on the wall is the part where Meredith described the sadness he also felt in Mississippi. Sadness, he wrote, "because I am immediately aware of the special subhuman role that I must play, because I am a Negro."

For Terrence Johnson, that ambivalence about Mississippi still rings true.

"You have a love/hate relationship with it," he says. "All these incidents that have happened throughout the years, even way back to Emmett Till. There are moments where you do feel subhuman in Mississippi. But at the end of the day, this is just as much my state as it is theirs."

Before we leave, I ask Terrence to read the final words of that James Meredith quotation: "I have always felt that Mississippi belonged to me and one must love what is his." 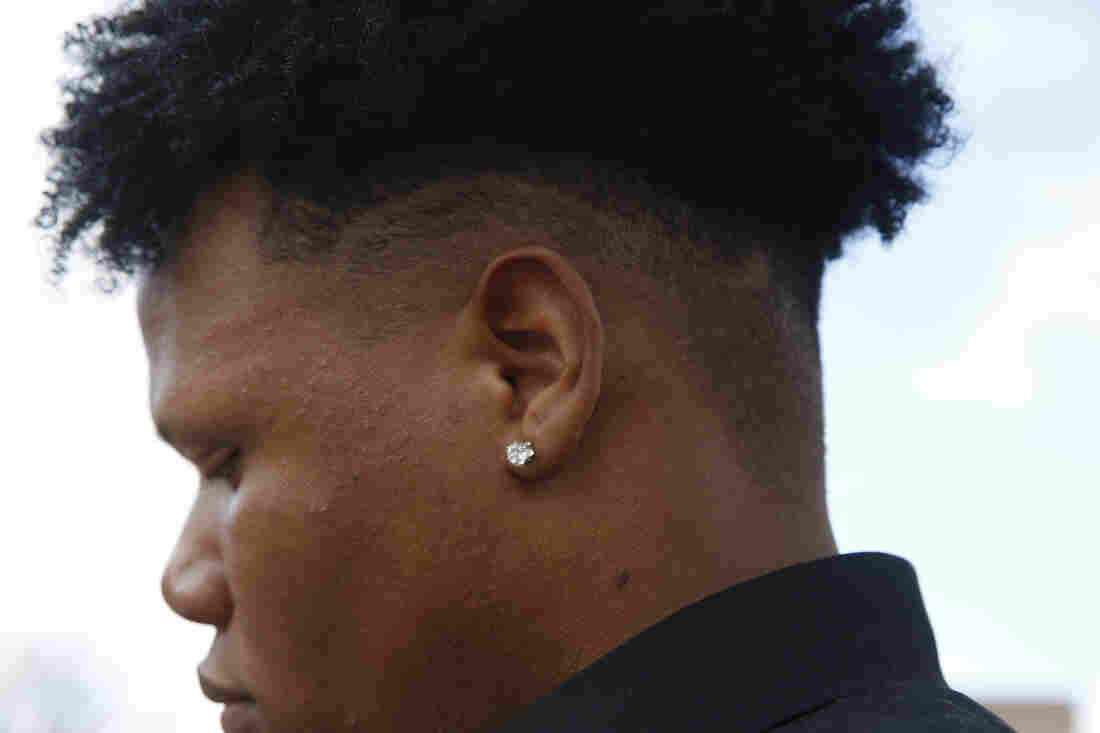 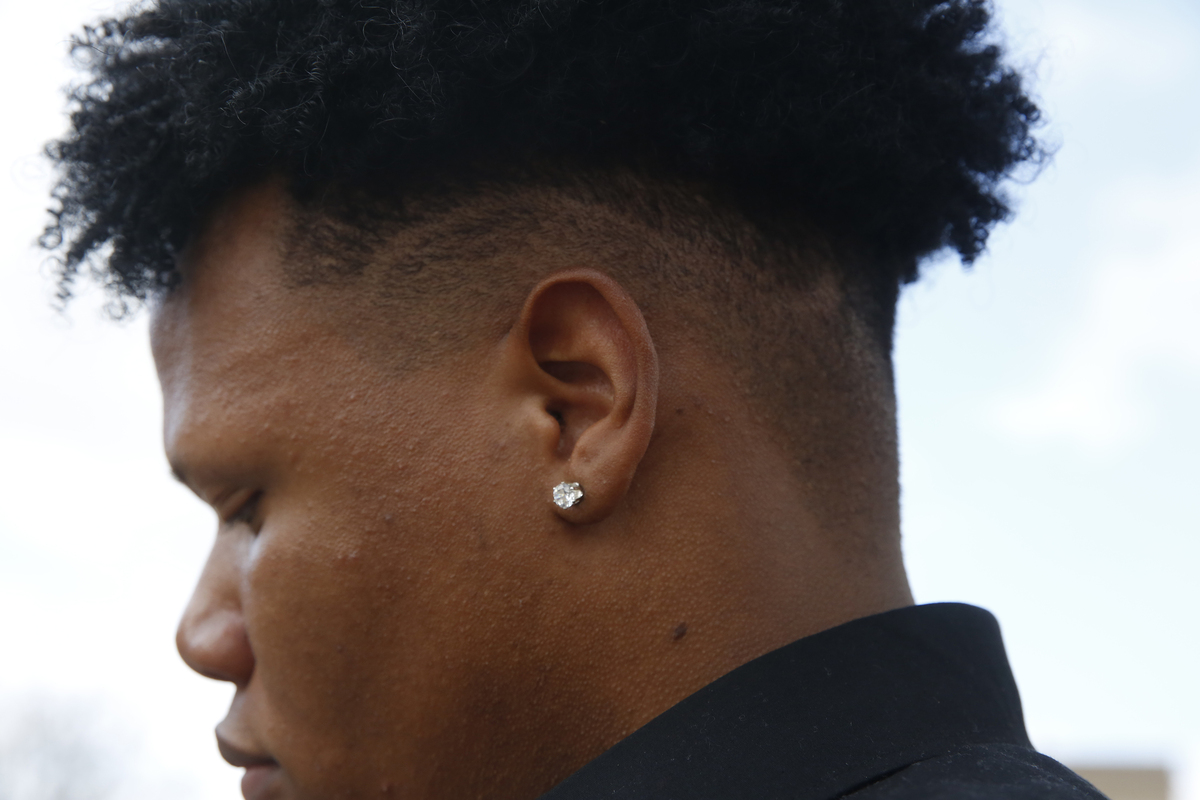 Johnson thinks about that for a moment.