Accessibility links
At Republican Town Halls Across The Country, Anger Rises Constituents have been confronting legislators over everything from the GOP's plan to repeal and replace Obamacare to the Trump White House. Here's a look at particularly rowdy events this week. 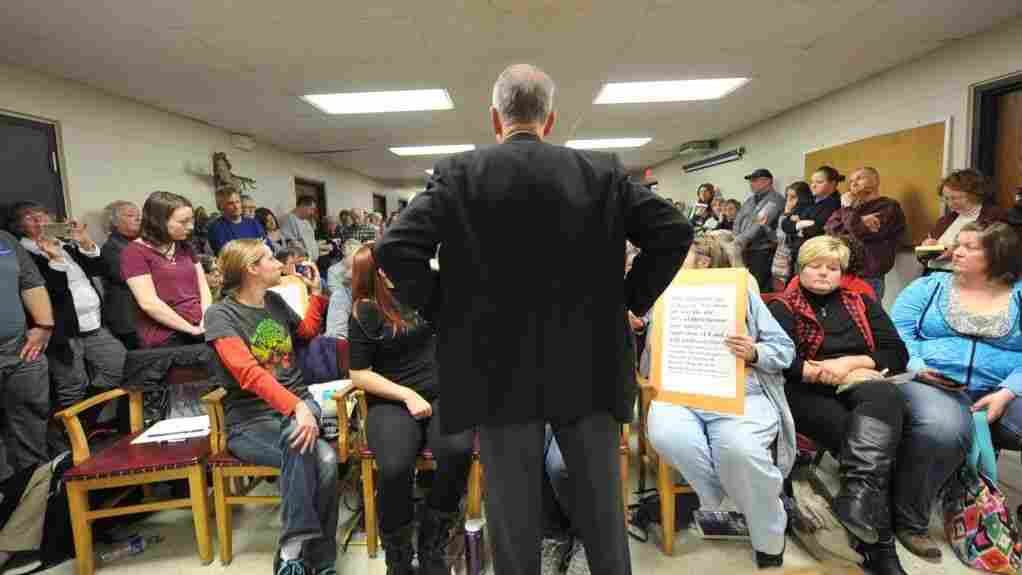 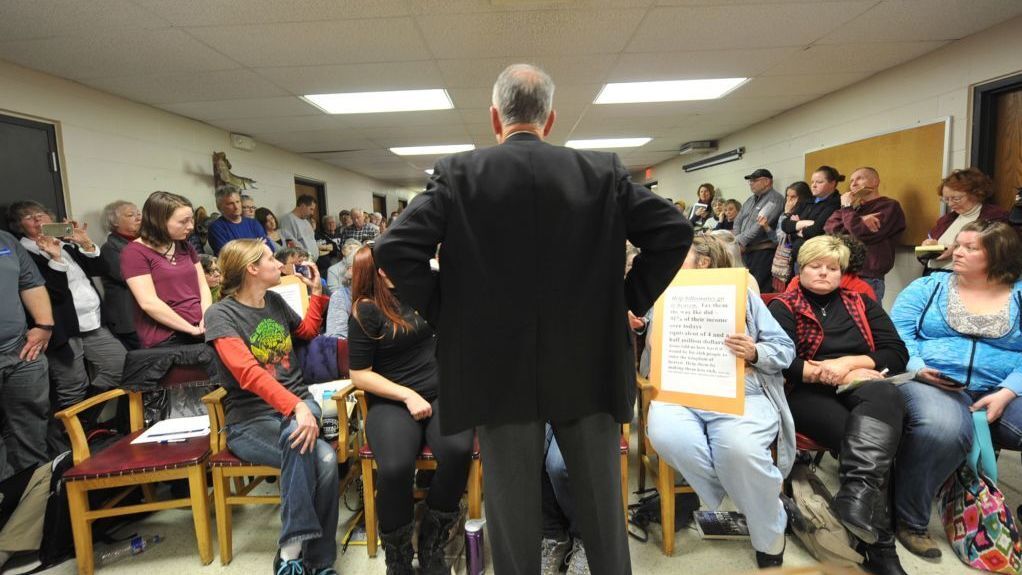 Sen. Chuck Grassley, R-Iowa, speaks during a town hall meeting at the Hancock County Courthouse on Tuesday in Garner, Iowa.

Republican members of Congress aren't exactly getting a warm welcome in their home districts during this week's recess.

Angry constituents have confronted legislators at town halls across the country, upset over everything from the GOP's plan to repeal and replace Obamacare, the Trump White House's travel ban, alleged Russian interference in the U.S. elections and more. New York Rep. Tom Reed, for example, faced these questions in a series of town halls he held over the weekend.

The backlash is happening in some deep red places, stretching from Reed's western New York district to Kentucky and Iowa. Some national Republicans — and President Trump in a Tuesday night tweet — have tried to dismiss the progressive activists helping to organize the protests.

The so-called angry crowds in home districts of some Republicans are actually, in numerous cases, planned out by liberal activists. Sad!

However, their statements almost mirror the arguments Democrats made in 2009 to explain away backlash at town halls that summer over the health care law. How did that work out? Democrats got a "shellacking" at the ballot box in November 2010.

Here are snapshots of rowdy events that have happened in the past couple of days:

Kentucky Sen. Mitch McConnell: The Senate majority leader didn't have a formal town hall scheduled, but he got plenty of blowback at a $10 per plate luncheon on Tuesday, which was supposed to be a GOP-friendly event, according to the Lexington Herald-Leader:

"At one point, a frustrated audience member implored him: 'Answer the question, Mitch!' after he offered a curt answer to a woman asking about lost coal jobs in Eastern Kentucky.

"As he began leaving the event, escorted by state and local law enforcement, a few in the crowd booed. Someone shouted 'Do your job.' "

Virginia Rep. Scott Taylor: The freshman congressman — who sits in a swing district sure to be a top target in 2018 — had a crowd of about 800 at his first town hall on Monday with another 200 waiting outside unable to get in, according to the Virginian Pilot. Local station WAVY-TV 10 had this report.

California Rep. Tom McClintock: Capital Public Radio's Ben Adler reports that a crowd of nearly 1,000 pressed the GOP congressman on health care Tuesday night in a town hall that was "opinionated yet peaceful, though manners and tempers sometimes ran short."

Tennessee Rep. Marsha Blackburn: About 130 people packed Blackburn's town hall on Tuesday, where she faced pointed questions about the GOP's Obamacare replacement plans. From The Tennessean:

"Many of the questions were without clear answers from Blackburn, who served on Trump's transition team and is carrying key legislation that will be a part of the repeal effort from the GOP-led House. She said the replacement will include provisions allowing people of certain age groups with pre-existing conditions to get insurance.

"She said the replacement plan will be 'more responsive and more affordable' as well, without going into many specifics."

Iowa Sen. Joni Ernst: The freshman senator's veterans roundtable was met with chants of "We want our voices heard!" and "Your last term!" according to CNN. "She fielded just one question on health care and abruptly ended the event after 45 minutes, with a long line of people still waiting to ask questions."

#Ernst is put on the spot on Obamacare by an enrollee. Her answer: Cite a couple provisions and tout HSAs. The audience jeered throughout. pic.twitter.com/xMVe8WhaWT

Virginia Rep. Dave Brat: In a packed banquet room in Blackstone, The Richmond Times-Dispatch reported, the congressman was jeered and applauded: "He charged through it all, at times smiling and being a good sport even when his audience booed."

.@RepDaveBrat seems to be enjoying the attention from constituents outside his town hall. pic.twitter.com/L7dAA11oOS