Accessibility links
Trump Press Secretary's Response To Town Hall Protests Is Not Far Off From Obama's Congressional town halls were overtaken with protests in the first year of Barack Obama's term, too. They weren't taken all that seriously, at first, but developed into a wave at the ballot box. 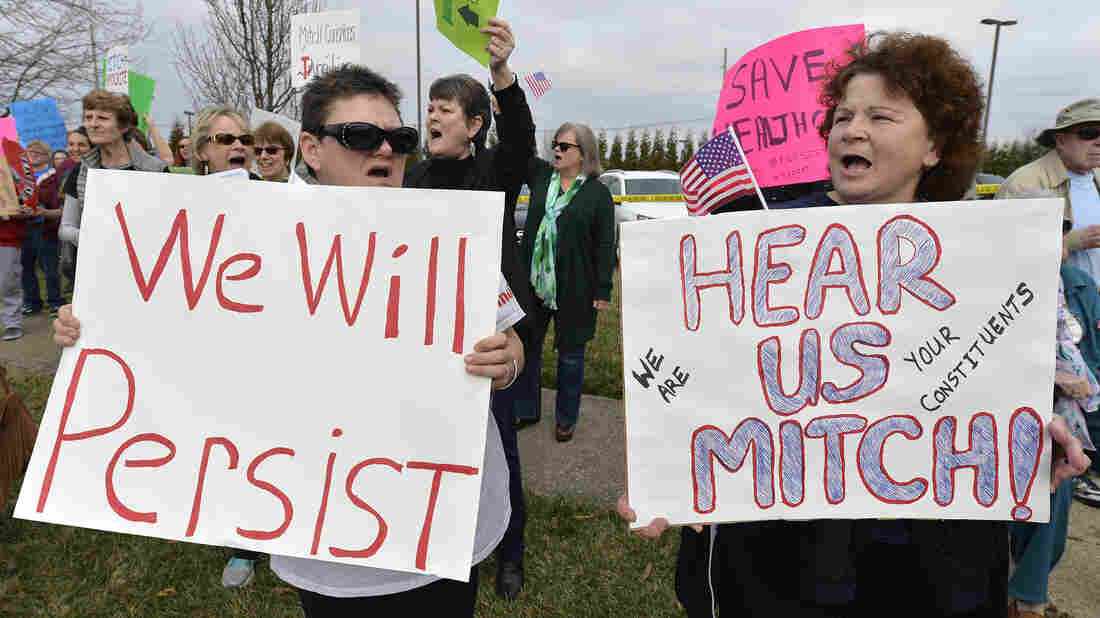 A group numbering in the hundreds gather to protest the appearance of Senate Majority Leader Mitch McConnell R-Ky., and the policies of the Trump administration in Jeffersontown, Ky., on Wednesday. Timothy D. Easley/AP hide caption 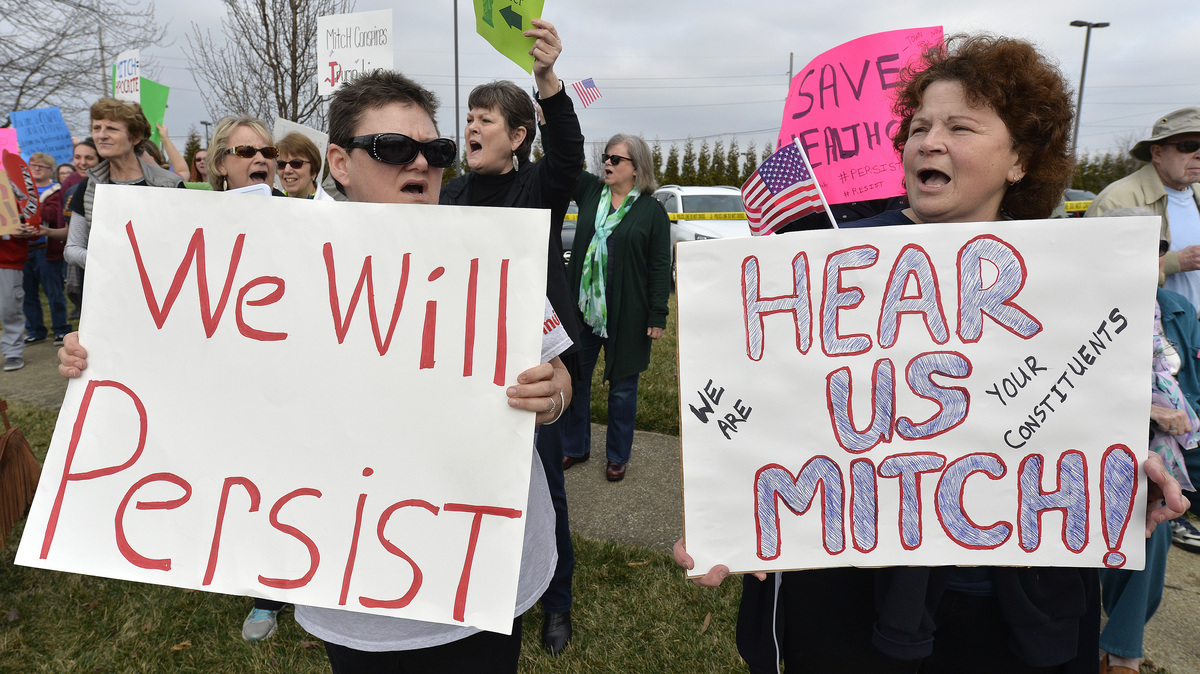 A group numbering in the hundreds gather to protest the appearance of Senate Majority Leader Mitch McConnell R-Ky., and the policies of the Trump administration in Jeffersontown, Ky., on Wednesday.

When you win an election, opposition can seem kind of, well, manufactured.

Asked about the protests facing members of Congress back home this week, White House press secretary Sean Spicer said, "Some people are clearly upset, but there is a bit of professional protester, manufactured base in there."

It turns out, that's not far off from how the Obama team reacted when protests erupted at town halls in the Summer of 2009.

"Well, I think what you've seen is they have bragged about manufacturing to some degree that anger," then-White House press secretary Robert Gibbs said at the time.

It's the question everyone would love to answer as protesters show up at town halls held by members of Congress who are home this week: Is this the liberal version of the Tea Party?

The scenes at Congressional town halls are similar, as are doubts about how organic the demonstrations are.

Last night, President Trump sent a tweet suggesting that Republicans being confronted at town halls are not facing the wrath of the actual voters who put them into office.

The so-called angry crowds in home districts of some Republicans are actually, in numerous cases, planned out by liberal activists. Sad!

Yes, many — if not most — of these protests are planned, just like many of the confrontations driven by Tea Party groups in 2009 against passing Obamacare in the first place were also planned.

Today, ABC News White House correspondent Jonathan Karl asked White House Press Secretary Sean Spicer, "The president referred to 'so-called angry crowds' at these town halls. Is he suggesting this is manufactured anger, that this is not real anger and real concern?"

.@PressSec to @jonkarl on angry town halls: “Just because they're loud doesn't necessarily mean that there are many” https://t.co/2XVxNbNyzW pic.twitter.com/PRBlYIx78p

Spicer called it a "hybrid." He said of some protests, "It is not a representation of a member's district." It's true that members like Rep. Jason Chaffetz, R-Utah, who won his seat with over 70 percent of the vote in 2016 may not see seemingly liberal protesters overtaking his town hall as an accurate measure of any electoral danger he may face in 2018. In fact, Chaffetz had referred to a clash at one of his recent events as "a paid attempt to bully an intimidate."

However, let's compare how this was dealt with by the Obama administration when protests against their efforts at healthcare reform rose up in 2009. Here's the exchange with former press secretary Robert Gibbs and former ABC White House correspondent Jake Tapper:

As much as Democrats might have downplayed the authenticity of protests eight years ago, there was no denying the political force surrounding the Tea Party when it developed into a wave by the midterm elections of 2010, and swept Republicans into control of the House of Representatives.

Much of that opposition was in response to the Affordable Care Act. Now, Republicans are moving to repeal and replace the healthcare law, and getting an earful from constituents worried about losing their coverage.

There's no way to know if this anger will develop into anything as powerful as the Tea Party wave. Regardless of whether there's enough energy to propel Democrats back into power down the road, it's at least giving the left something to rally around.