Accessibility links
This Trip Through 'The Alps' Is A Little Bit Bumpy Stephen O'Shea's quirky travelogue is packed with facts and history, but it's marred by a few odd choices — for example, why visit the famed skiing town of Val d'Isère at the height of summer?

This Trip Through 'The Alps' Is A Little Bit Bumpy

This Trip Through 'The Alps' Is A Little Bit Bumpy 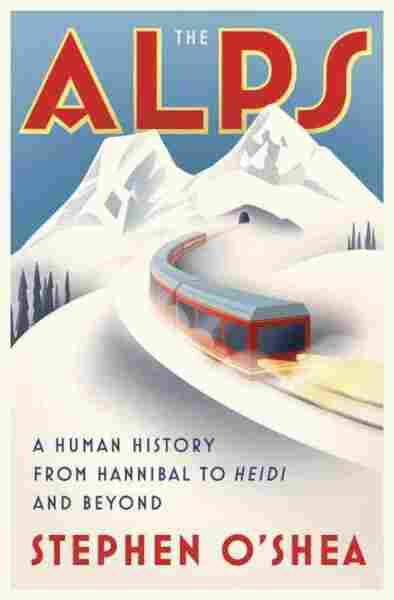 A Human History from Hannibal to Heidi and Beyond

I got carsick reading Stephen O'Shea's The Alps, much of which involves navigating one "neurotic noodle of a road" after another as he twists his way up and down mountains in pursuit of the highs and lows of Alpine history. Reading about his umpteenth hairpin turn, I found myself whining, "Are we almost there?"

I was attracted to O'Shea's book by Nicholas Misani's striking cover, which evokes the vintage posters of Davos and Zermatt that have adorned my sister's walls since our teens. For years, we spent family holidays skiing in Switzerland, a fresh-air break from our London home, so I picked up The Alps looking forward to learning more about our winter wonderland.

O'Shea's quirky travelogue delivers an avalanche of entertaining facts and history. But the Toronto-born writer, whose earlier books include Back to the Front: an Accidental Historian Walks the Trenches of World War I, has made some odd choices with this project. For starters, despite pronounced acrophobia, he structures his narrative around a mainly solo, white-knuckled "vertical road trip ... up and down, up and down" that winds through six of the seven alpine countries — all but little Lichtenstein, a surprising omission for someone who lives in the similarly diminutive state of Rhode Island.

The splendor of the astounding vistas is mainly lost on O'Shea because of his fear of heights; he's more comfortable when his view is blocked by trees or fog. Dutifully ascending the Aiguille du Midi — the Needle of the South — via an aerial tramway, he can't bear to look down from his "airborne plexiglass prison." By its third iteration, his running joke, "It's not that I'm afraid of heights, but ..." feels as thin as the mountain air.

Disappointingly, his journey is limited to the summer of 2014 — the hundredth anniversary of the start of World War I. Sure, summer driving is easier, but this is somewhat akin to visiting Cape Cod in the dead of winter. True, the floral varieties are spectacular — though it's too early for edelweiss -- and the Alps attract no shortage of fair-weather hikers, bikers, and climbers. He amusingly dubs mountain cyclists "a cardiovascular nobility," and names the various flocks according to their nationality: a "bratwurst of German bikers," a "tulip of Dutch bikers," a "pilsener of Czech bikers," and so on. But is it any wonder that he finds ski resorts like Val d'Isère — hometown of Jean-Claude Killy, France's 1968 Olympics triple Gold Medalist — an off-season ghost town?

[The Alps] suffers from trying to cover too much ground, both physically and historically, and too many pages devoted to driving through mountain passes.

During the course of his journey O'Shea calls attention to rapidly shrinking glaciers, proliferating vacation chalets, and industrial pollution, but his primary interest is with sites tied to notable historical events. These include Mont Cenis, where Hannibal possibly crossed into Italy (the exact location is uncertain); Uri, home canton of William Tell, "the lodestar of Swiss nationalism;" and, more darkly, Berchtesgaden and Obersalzberg, where Hitler and his henchmen spent more time than they did in Berlin — and which cause him to shudder with the realization that "the decisions made near this sleepy mountain town led to the deaths of millions."

But never mind maneuvering around all those switchbacks — O'Shea shows real flair tracking down intriguing literary and cultural connections, not just to Heidi but to the birthplace of Mary Shelley's Frankenstein and the spot that Sir Arthur Conan Doyle, an avid skier and promoter of Alpine touristry, chose for the fatal encounter between Sherlock Holmes and Professor James Moriarty, "the Napoleon of crime."

O'Shea's writing is entertaining and energetic, though sometimes over-the-top. Lord Byron, who toured Chillon Castle with the Shelleys, is "the clubfooted copulator extraordinaire." Paragliders hurling themselves off cliffs are like "multicolored lemmings intent on a good time." And — not surprising given his acrophobia — his descriptions of mountaineering disasters are especially horrifying.

O'Shea's goal is to demonstrate how the Alps — thousands of peaks from France to Slovenia which were the result of "the violent collision of European and African techtonic plates over millennia" — created national, cultural, culinary, and linguistic divides between northern and southern Europe. But his book suffers from trying to cover too much ground, both physically and historically, and too many pages devoted to driving through mountain passes. His broad brush overviews of military invasions and shifting national borderlines rush by in a blur.

One last complaint from the back seat: I'm a big believer in the pictorial power of prose, and The Alps evokes many dazzling images. But this is one book that yodels for supplementary visuals — illustrations, photographs, and above all, sharp endpaper maps of O'Shea's ambitious route — plus a few extended layovers to break up all that driving and really absorb the local color.