Accessibility links
Book Review: 'A Horse Walks Into A Bar,' By David Grossman David Grossman's unsettling new novel takes place over the course of a two-hour comedy set, as what seems like just a bad performance evolves into something truly strange, painful and urgent.

'A Horse Walks Into A Bar,' And A Bad Comedy Set Proves Revelatory

'A Horse Walks Into A Bar,' And A Bad Comedy Set Proves Revelatory 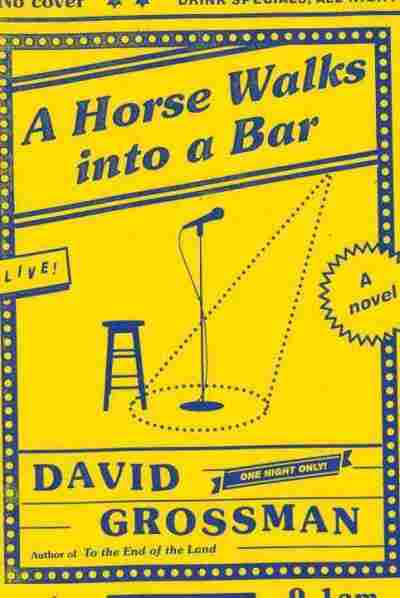 A Horse Walks into a Bar

Title
A Horse Walks into a Bar
Author
David Grossman

Bad stand-up comedy is, for everyone involved, a special kind of hell. There's really nothing worse than the awkwardness that ensues when a comic bombs in front of a restive audience at an open-mic night, half of whom have been dragged there against their will in the first place. Great comedians have made enduring art and even changed society; all bad comedians have ever done is made people hurry out of a bar with their gin-and-tonics half finished.

Dov Greenstein, the comic at the center of David Grossman's unsettling and mesmerizing A Horse Walks into a Bar, isn't quite that bad. At least he's not at the start of the novel, which takes place during one long comedy set in the Israeli city of Netanya. He starts with a series of hacky jokes, and the audience plays along. But it doesn't take long for things to get truly weird, and not in a good way.

Grossman's novel is narrated by Avishai Lavar, a retired judge and childhood friend of Greenstein. He's been invited to the show by the comic, and has only reluctantly agreed to come. "I want you to see me, really see me, and then afterward tell me," Greenstein tells the judge. "Tell you what?" asks Lazar, to which Greenstein simply responds, "What you saw."

Lazar suspects he's been asked to come to the show so Greenstein can publicly confront him about their time together in a military camp when they were high schoolers. The judge witnessed Greenstein, an awkward and nerdy boy, get bullied repeatedly, but never did anything to stop it.

Grossman takes a lot of risks with 'A Horse Walks into a Bar,' and every one of them pays off spectacularly well.

It doesn't take long for Greenstein's set to descend into a series of disjointed rants, insulting the audience members and their city, roast-style. He complains about his life — he's 57 with five estranged kids (I swear to God, standing before you tonight is the first man in history to get postpartum depression. Five times!") and a recent prostate cancer diagnosis. Lazar is, at first, appalled: "[Greenstein] enjoys fanning the flames, stimulating some kind of vulgar, corrupt gland, and I suddenly know in the clearest and simplest way that I do not want or need to be here."

Greenstein's routine gets more and more bizarre — audience members start leaving, and the comic tallies the departed guests on a chalkboard on stage. He starts to recount stories from his unhappy childhood, with an abusive father: "With him, you never really knew where the next punch was going to come from." Eventually he gets to the military camp that he attended with Lazar, but it doesn't turn out the way the judge expected it to.

Grossman takes a lot of risks with A Horse Walks into a Bar, and every one of them pays off spectacularly well. Writing about a stand-up comedy set isn't easy; comic performances — even the bad ones — have a distinctive rhythm that can be difficult to recreate. But Grossman and translator Jessica Cohen do a wonderful job with Greenstein's long, sometimes borderline incoherent rants. It's also hard to pull off a novel set in the space of two hours, but Grossman's timing is perfect; the story feels urgent, and the reader can almost imagine being trapped in the comedy club with the increasingly confused audience.

And while A Horse Walks into a Bar is, in parts, stunningly sad, it's not another "tears of a clown" sob story — while Greenstein is a man in genuine pain, Grossman doesn't paint him as doomed. The ending isn't an artificially happy one, but neither is it hopeless; there's no Portnoy's Complaint-style punchline and no concession to despair.

A Horse Walks into a Bar is a novel as beautiful as it is unusual, and it's nearly impossible to put down. In the end, it's not as much about comedy as it is about witness: Greenstein needs someone to validate his pain, to let him know that he really has survived a life that's kicked him time and time again. As Lazar reflects toward the end of the novel, "I believe he is reminding me of his request: that thing that comes out of a person without his control. That's what he wanted me to tell him. It cannot be put into words, I realize, and that must be the point of it." It's hard to put any kind of pain into words, but Grossman does it absolutely perfectly.