Accessibility links
Trump's Election Drives More Women To Consider Running For Office One group that helps train female candidates says applications for its programs are up 87 percent since Election Day. 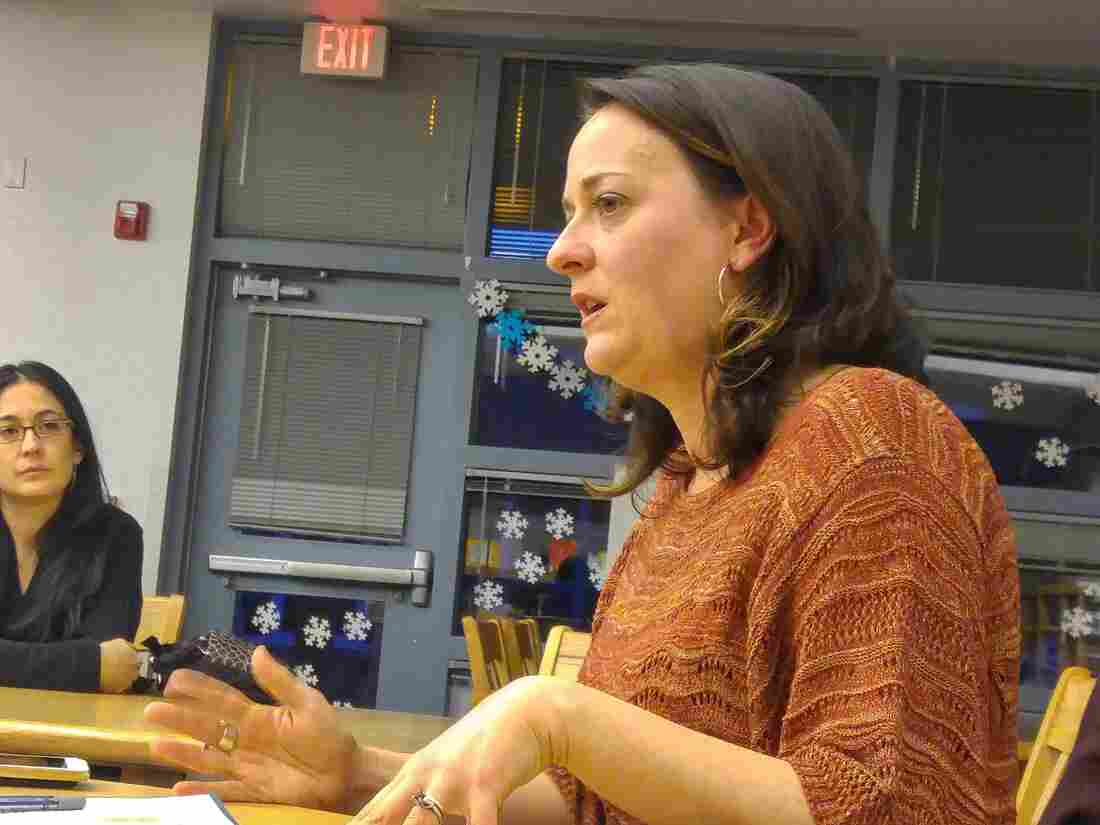 Kate Noble speaks to voters at a listening session at Gonzales Community School in Santa Fe, N.M. She ran for a seat on the Santa Fe Public Schools Board. Megan Kamerick/KUNM hide caption 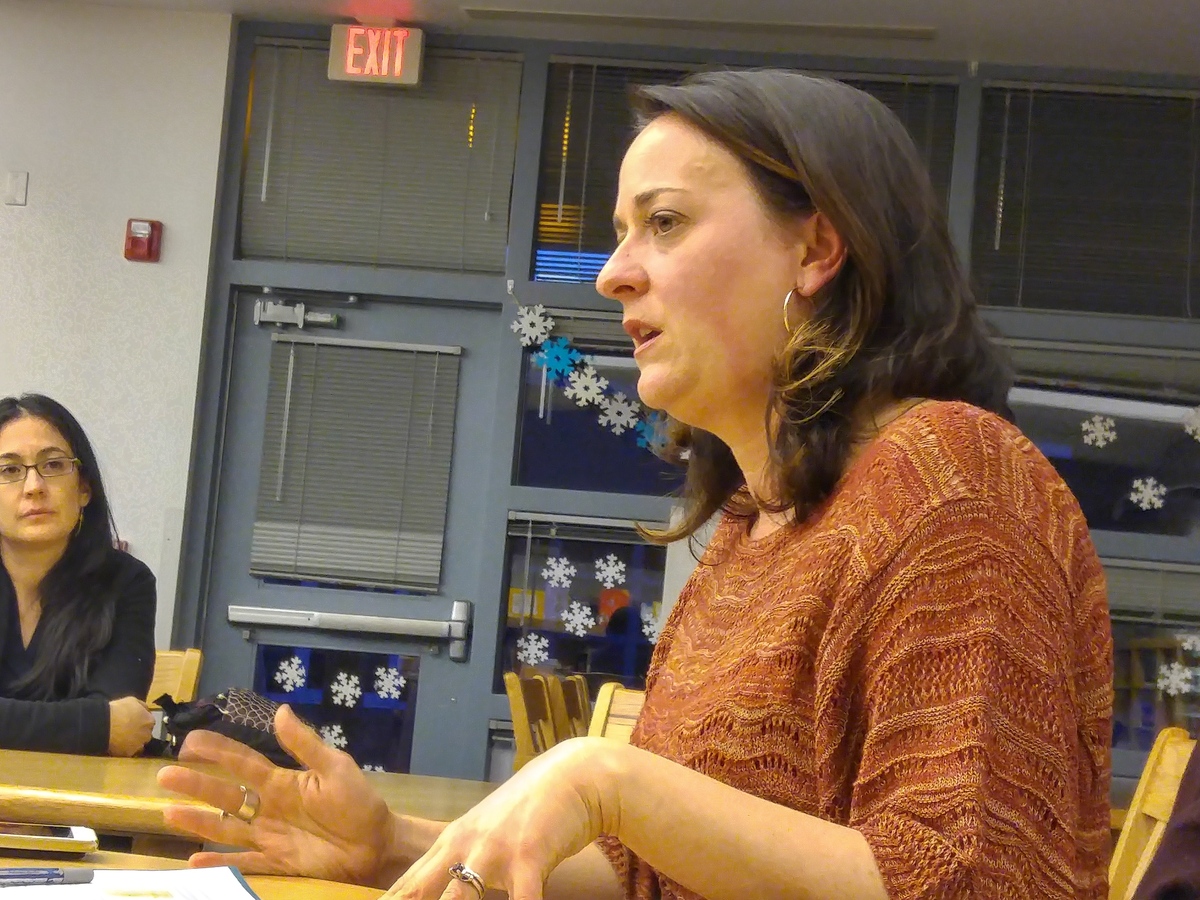 Kate Noble speaks to voters at a listening session at Gonzales Community School in Santa Fe, N.M. She ran for a seat on the Santa Fe Public Schools Board.

Will the election of Donald Trump, who once boasted of grabbing women by the genitalia and has a history of sexist remarks, create a wave of female candidates at all levels of government in the coming years?

Early signs from the groups that work with women considering a bid for office suggest a level of intense interest not seen in at least a quarter century.

Kate Noble had never considered getting involved in politics until she woke up the day after Trump's surprise victory over Hillary Clinton.

Noble worked for years in the economic development office of Santa Fe, N.M., and she believes a good workforce depends on well-educated citizens, so she decided to run for a local school board seat.

Her political philosophy is distinctly un-Trumpian: "I want to be someone who can bring forward anybody's and everybody's good ideas. They don't need to be my own."

In Noble's case, she contacted the New Mexico branch of Emerge, a group that trains Democratic women to run for office. She ended up running unopposed and won.

Women Set To Make Gains In Congress, But Still Have A Long Way To Go

It turns out Noble wasn't the only woman to wake up with the same idea after the election.

"We saw an immediate uptick in interest in our work," said Andrea Dew Steele, the president and founder of Emerge America. "And it has persisted through today. It's unlike anything we've ever seen."

"Some of it is absolutely a reaction to President Trump and his policies," said Jean Sinzdak, of the Center for American Women and Politics at Rutgers University. "For others, it is Hillary Clinton's loss," because the fact that we don't have a female president "sort of woke them up to the idea that maybe we haven't made as much progress as we thought."

Sinzdak oversees the university's nonpartisan New Jersey training program, Ready to Run, which also has affiliates nationwide. Ready to Run is experiencing its own Trump bump with more than 50 women signing up immediately after Election Day. This year's program is already at capacity, which Sinzdak, who has been running the program for 12 years, says typically doesn't happen until March. The program has been expanded to accommodate up to 50 extra people.

Both Steele and Sinzdak say the interest they're seeing from women who want to run for office reminds them of what they saw in the early 1990s following the Anita Hill hearings. Hill had accused then-Supreme Court nominee, now Justice, Clarence Thomas of sexual harassment.

After those hearings, Sinzdak said, "We did have an increase in the numbers of women running for office and we saw a big jump in the number of women who ran for and won election to Congress."

While Trump became president without ever running for another office, most people get their start in politics the way Noble is, by running for local office.

"I don't think people realize that a lot of the decisions that are made that affect their daily lives happen at the local and state levels," said Ashley Sanderson, the executive director of Emerge New Mexico.

But a surge in interest in running for office might not translate into women actually running for office, said Rachel Michelin, executive director of the nonpartisan training group California Women Lead, pointing to 2012 as a year that was supposed to be good for female candidates in California.

"We had open seats. We just had redistricting in California. It was a presidential election. So we thought we would see this big surge of women getting elected," she said. "What happened, though, was we just didn't have enough women running."

That's where groups like California Women Lead, Emerge America and Ready to Run come in to help guide women from signing up for a training program to actually running for office. Steele, of Emerge America, believes this latest burst of enthusiasm is different from past years and she's confident that more women will actually run in 2018.

"The biggest challenge for us is getting more women interested in running," said Steele. "So the fact that women are self-nominating, are waking up and saying 'I want to do this,' is the biggest, most hopeful sign that I've seen definitely since the Anita Hill hearings."

As for Noble, she says she's already learned a lot by running for office.

"I have really liked listening to people, working on ideas, having people listening to me." She says the school board campaign was a good test run for future campaigns. "I'm so energized."