Accessibility links
'Get Out': A Terrifically Topical — And Terrifying — Satire Comedian Jordan Peele's debut feature as writer/director is a blisteringly smart horror film buoyed by the "shimmering, righteous anger" of its take on race, says critic Chris Klimek. 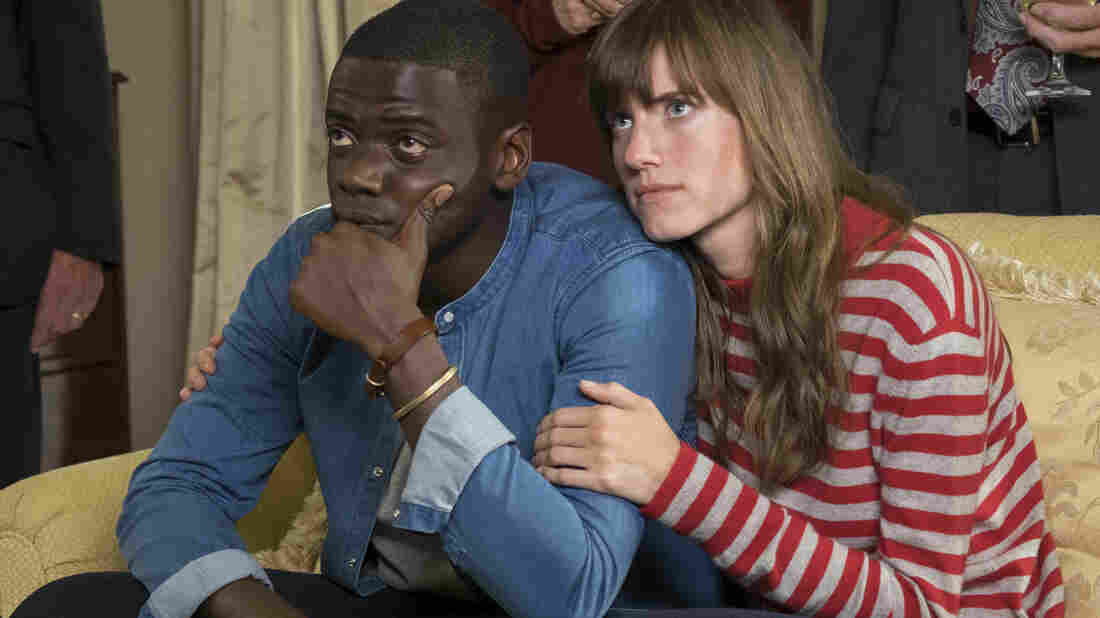 Guess Who's Coming To Dinner And Never Leaving: Chris (Daniel Kaluuya) and Rose (Allison Williams) in Get Out. Justin Lubin/Universal Pictures hide caption 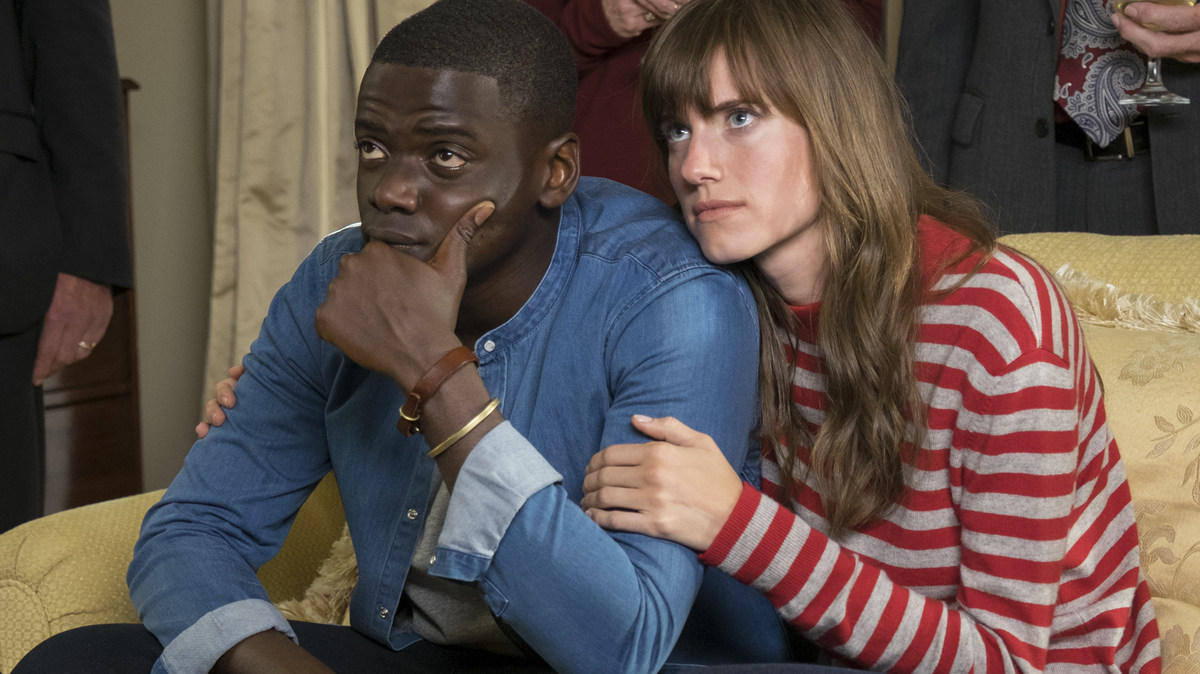 Guess Who's Coming To Dinner And Never Leaving: Chris (Daniel Kaluuya) and Rose (Allison Williams) in Get Out.

Horror parodies are seldom as funny, and never as scary, as fright-flicks that play their scares, er, straight. Jordan Peele — the shorter half of the 21st century's funniest sketch-comedy duo — understands this, and that's why Get Out, his debut feature as writer and director, is so truly, madly, mercilessly entertaining, even when it makes you want to jump out of your skin. It is small-c catholic in its tastes, liberally sampling elements of Guess Who's Coming to Dinner, Rosemary's Baby and Invasion of the Body Snatchers before morphing into the most potent racial revenge fantasy since Django Unchained. But a parody it's not: It's as gnarly as Green Room, 2016's nerviest thriller, whose villains wore their bigotry on their tattooed arms. What makes Get Out stand out is that its social critique — usually present in the horror-survival genre as subtext — is very much its text.

That's a writing trick Peele and his creative partner, Keegan-Michael Key, used over and over again through five seasons of their marvelous Comedy Central series, one that boasted production values that stood head and shoulders above anything else in sketch TV. Key & Peele's movie sendups looked like real movies, and now we have a good idea why: Peele is a world-class filmmaker. (Nearly all Key & Peele episodes were directed by Peter Atencio, who also directed the two comics in last year's Keanu. That was a funny movie, but it had nothing like the invention, the intensity or the shimmering, righteous anger that Get Out possesses.) His movie is as much a triumph of craft as of inspiration.

Get Out's cautionary tale concerns Chris (Daniel Kaluuya), a 26-year-old photographer, whose white girlfriend, Rose Armitage (Allison Williams from HBO's Girls, though her carbon-fiber jawline makes you wonder how she hasn't shown up in an Alien sequel yet), takes him home to meet her affluent parents. She hasn't told them the man she is dating is black, but she assures Chris their liberal credentials are in good standing and that he'll be welcomed unconditionally. Chris is wary, but he loves Rose and trusts her, so he overrules his better judgment — and the warnings of his TSA agent best pal, Rod (LilRel Howery, marvelous in a comic supporting role) — and they drive upstate. When a cop demands Chris's ID after a minor accident even though Rose was the one driving, Rose calls out the cop for profiling even though Chris is eager to comply. In Rose, it seems, Chris has found a true and constant ally.

The less I tell you about what happens once she introduces Chris to her folks — Catherine Keener and Bradley Whitford, perfectly cast as a smug psychiatrist and a smug neurosurgeon, respectively — the better. Let it suffice to say that Allison's louche med-student brother (Caleb Landry Jones) can't refrain from commenting admiringly on Chris's "genetic makeup" and that the Armitages are weirdly insistent Chris meet every one of their neighbors, one of whom cheerfully observes that "black is in fashion again." Green Room's gaptoothed skinheads had nothing on these cardigan-wearing, tea-sipping Clinton voters. Even more unsettling is the fact that the Armitages' black housekeeper (Betty Gabriel) and their black gardener/handyman (Marcus Henderson) evince a Stepford-like servility when they're around company and behave even more strangely when they think they're alone.

But it takes a long time for the microaggressions Chris experiences at the hands of the Armitages and their confederates to harden into something more directly threatening — long enough for Chris, and for us, to wonder if he's just being paranoid. Rose listens to him airing these concerns with saintly patience, but Peele's handheld camera in these scenes keeps the anxiety high. It's rare to find a first-time director so fully in command of his tone. But if 90 percent of directing is casting (an adage that's been variously ascribed to John Ford, Elia Kazan and many others) then Peele started at 90: His actors are top-to-bottom great, but Kaluuya (whose expressive face you may recall from "15 Million Merits," perhaps the most upsetting of all Black Mirror episodes) is especially magnetic, letting us see the grinding gearworks behind his eyes without speaking a word.

That other 10 percent we have to give to Peele. He opens the picture with a long steadicam shot of a young black man's attempt to locate an address in a suburban, presumably majority-white neighborhood after dark, while a car creeps along too slowly beside him. We're primed to expect a Trayvon Martin-esque killing, and the way the scene resolves is the first of Peele's many rug-pulls. It's a powerful sequence, but Get Out might've been even stronger without it. This prologue seems inserted to pre-empt complaints that Get Out takes too long to Get Going. It doesn't. Its pace, like everything else about it, is just right.