Accessibility links
New Orleans And The Hard Work Of Pushing Down The Murder Rate President Trump is promising to crack down on crime. But police crackdowns have already been tried in cities such as New Orleans, which is now enduring a resurgence in homicide. 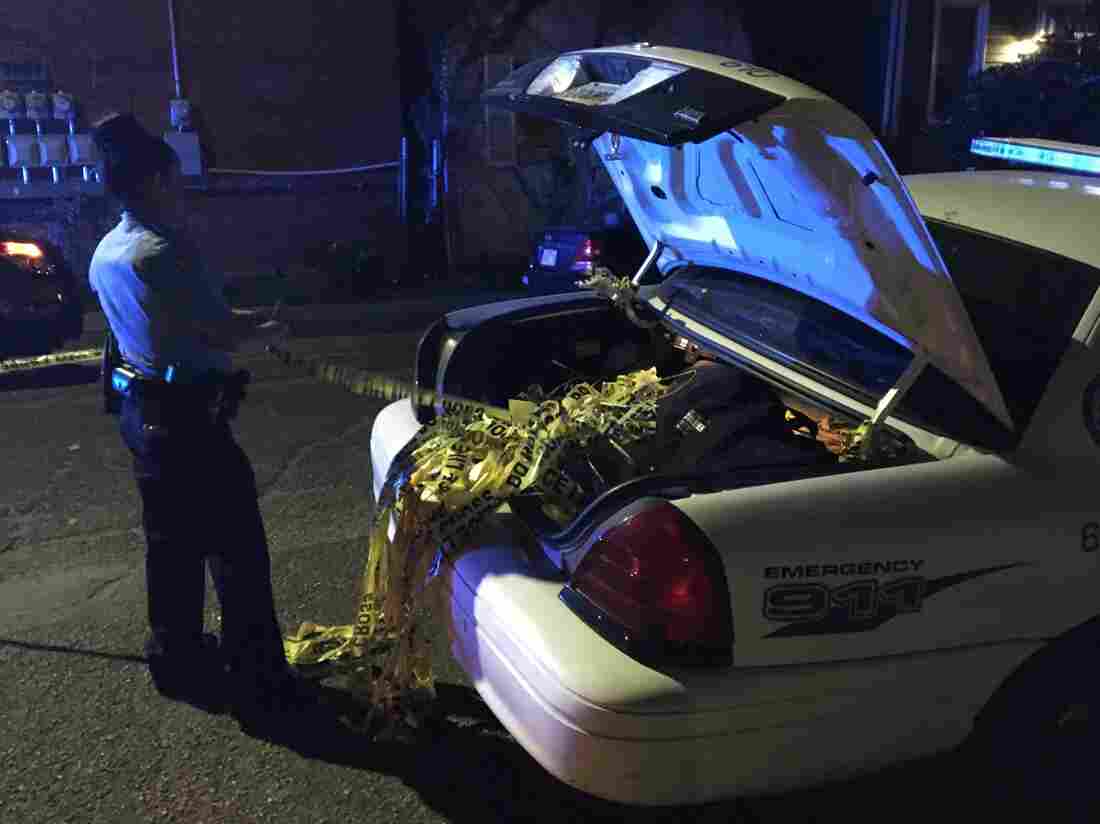 A New Orleans police officer strings up used crime scene tape at the scene of a drive-by shooting in the Central City neighborhood. One hundred people were shot in New Orleans by Feb. 10 — about a month sooner than recent years. Martin Kaste/NPR hide caption 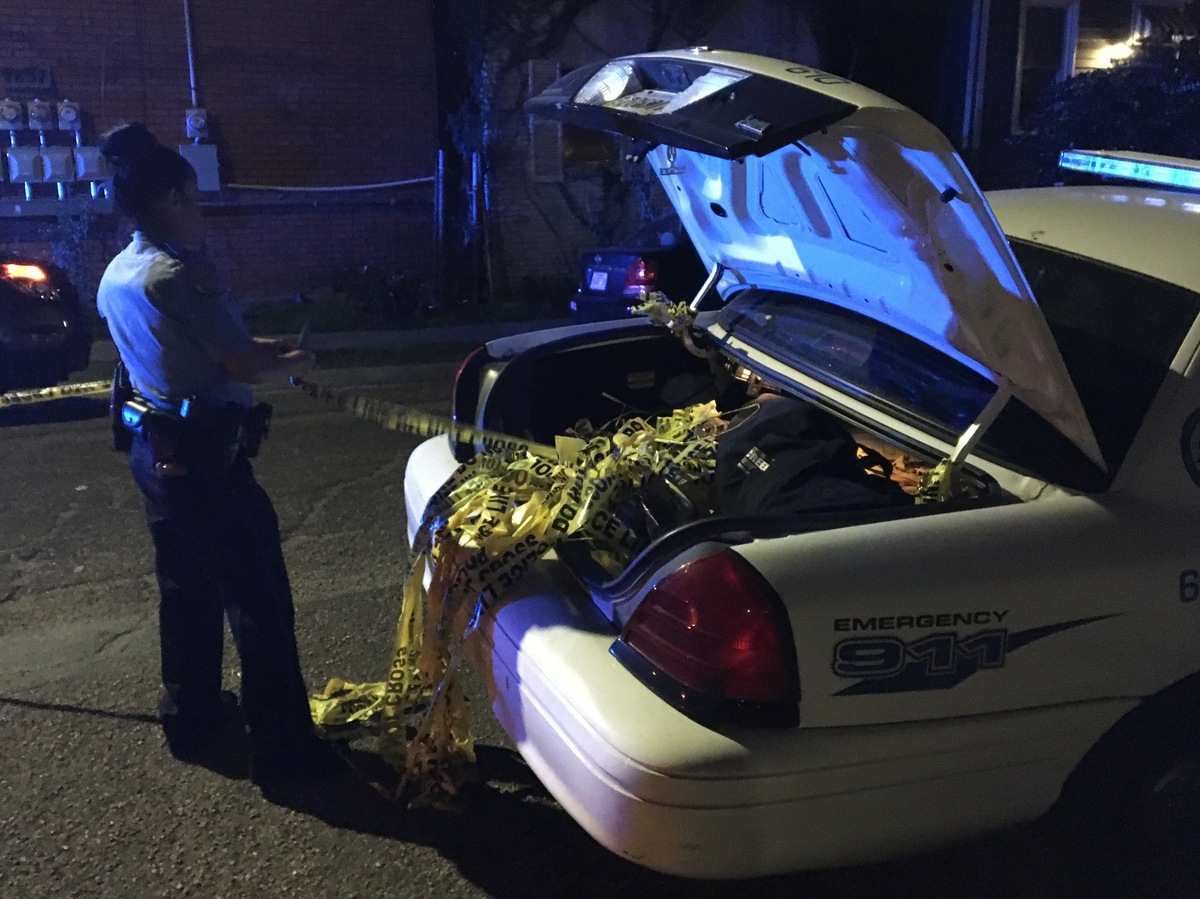 A New Orleans police officer strings up used crime scene tape at the scene of a drive-by shooting in the Central City neighborhood. One hundred people were shot in New Orleans by Feb. 10 — about a month sooner than recent years.

Murders are on the rise in the United States.

The national murder rate jumped dramatically in 2015, and early indications are that it rose again in 2016, though official numbers aren't available yet.

But most Americans aren't seeing this increase because most of it is being driven by surges in violence in a handful of cities, such as Chicago and New Orleans.

New Orleans is an especially disappointing case because the city had made significant progress in pushing down its murder rate. Starting in 2012, it implemented a targeted anti-gang violence effort called "NOLA for Life," which led to a 20 percent year-to-year decrease in the number of murders. For the next couple of years, the murders roughly plateaued at the lower rate.

That all changed last summer.

"There's been a dramatic increase in gun violence that started in July of 2016, got significantly worse in October and November and then has continued to get worse in the first eight weeks of 2017," says Jeff Asher, a New Orleans crime analyst.

Low-Income PoCs Still Don't Trust The Police, But Would Work With Them

Asher keeps close watch on gun violence, and he marks the grim milestones on his Twitter feed.

The fact that New Orleans has been so quick this year to reach its 100th shooting victim — dead and wounded — is just one symptom of the severity of what's going on in the city.

Another is the sense of routine at the scene of the shooting where that milestone was reached.

In the early evening of Feb. 10, New Orleans police strung recycled crime scene tape around the intersection of Second Street and Dryades in the Central City neighborhood. Six people were shot there in a drive-by shooting aimed at a group of young men who hang out on that corner.

The only fatality is a woman who recently arrived from Central America and who appears to have been an unintended victim of a stray bullet.

A few neighbors come out to watch the police work the scene, but a block away, a man who just gives his name as Sean is sitting in his car, scrolling through his phone. He seems to shrug off the shooting.

"Every now and then, somebody that's not involved will probably get shot," he says. "But for the most part, these are people that are involved in activities with each other. It's the bad people who are killing the bad people."

It's a common refrain in New Orleans: yes, the murder rate here is high, but it's mostly a small group of people who are killing each other.

This line of thinking is meant to make it easier to live in cities like this. But it also happens to be the insight at the heart of the strategy that helped New Orleans push down its murder rate — at least for a few years. Most homicides are committed by a small percentage of the population.

"New Orleans committed to 'focused deterrence' strategy," says Nick Corsaro, of the University of Cincinnati. He's one of the co-authors of a study of New Orleans' success in pushing down murder rates in 2013.

"Focused deterrence" is a strategy, pioneered in Boston in the 1990s, which identifies the people — usually in gangs — who are locked into retaliatory gun violence.

"You concentrate your efforts, from policing, prosecution, probation, parole, federal prosecution, to let the offenders of those groups know that specific activities will be focused on those individuals, if they continue to engage in violence," Corsaro says.

Calling this effort "NOLA for Life," the city started by throwing the book at dozens of people involved in gang violence and then bringing in others for a "call-in" — a group meeting at the courthouse in which they're put on notice that they're next if they continue with the gun violence.

The "call-ins" are based on the idea that the certainty of punishment matters more than the severity of punishment; if you communicate clearly with the gang-involved people what's at stake, they'll think twice.

"At the time, I was working in Central City, which is where the violence was happening," says Frank Young, a New Orleans Police district commander. "And I watched it decline, I watched it— I watched it dive. With every announcement of indictments that were made, violent crime went down. Shootings were down, murders were down. It was incredible." 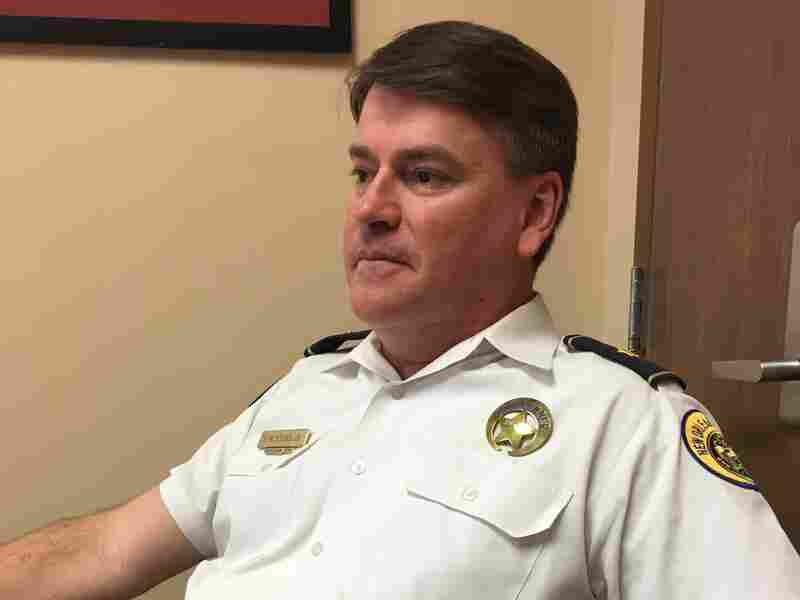 Frank Young is the commander of the New Orleans Police Department's fifth district, where gun violence has surged. He blames factors such as a growing number of people who keep guns in their cars, which then get stolen and used in retaliatory shootings. Martin Kaste/NPR hide caption 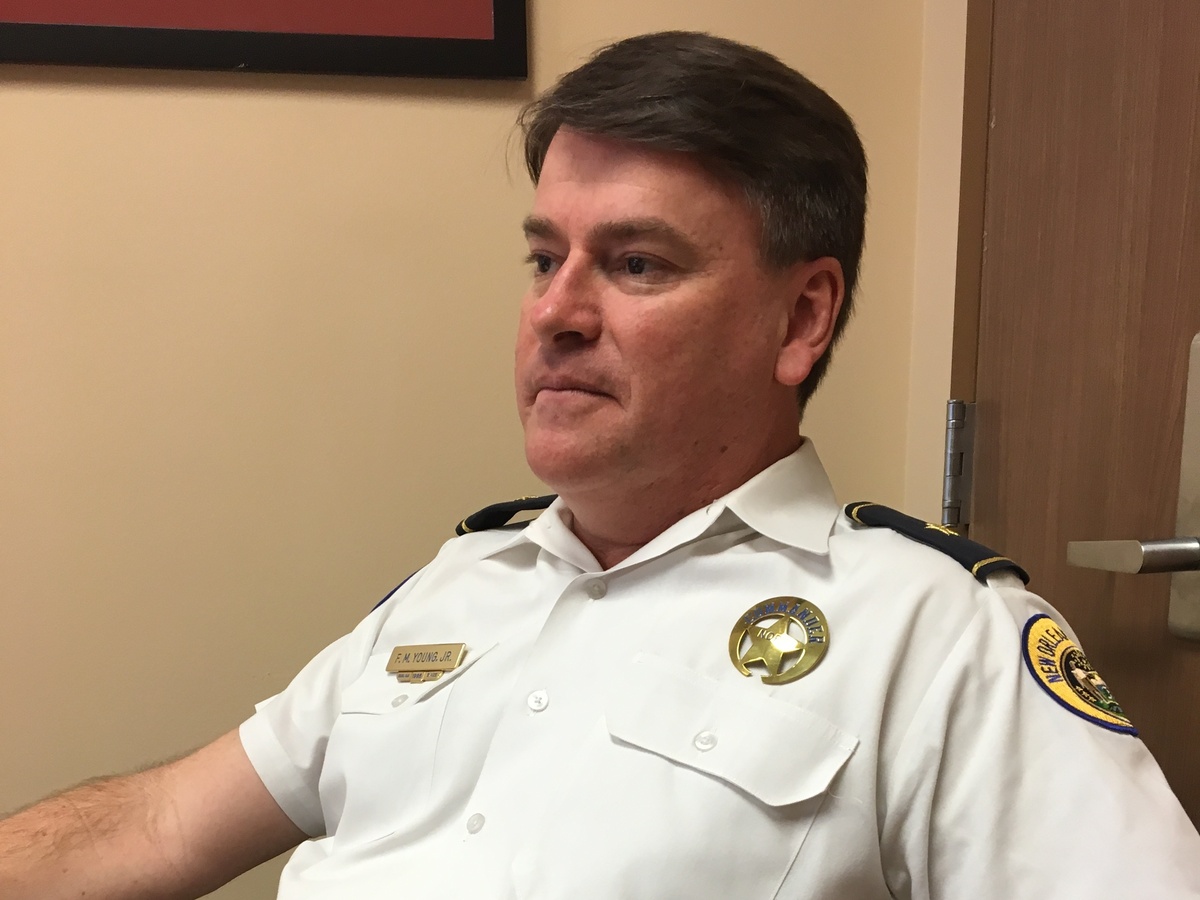 Frank Young is the commander of the New Orleans Police Department's fifth district, where gun violence has surged. He blames factors such as a growing number of people who keep guns in their cars, which then get stolen and used in retaliatory shootings.

But now that effect has worn off.

These days, Young commands the fifth district, just east of the French Quarter, where he's had eight murders in just the first six weeks of the year. He has some theories for why the violence is back up: too many people are leaving guns in their cars to be stolen, and kids are on social media, starting beefs that turn homicidal.

But none of those things are that new.

What has changed is that New Orleans appears to be putting less effort into its focused deterrence strategy. Indictments have slowed to a trickle, and the "call-in" meetings stopped happening 15 months ago. (The city has now announced it will hold another one soon.)

Why would New Orleans stop pushing a strategy that seemed to be working? A big factor seems to be manpower.

To save money after the recession, the city let police department staff shrink through attrition to the point at which it was hundreds of officers lower than usual. Then, in late 2015, the department came under pressure from the media to improve its response times to 911 calls, which could take hours.

"We had to prioritize," Young says. "What's it going to be: building a long-term case or being there when people need us right now?"

When Ronal Serpas was police superintendent in New Orleans, he warned the city of the perils of letting staffing drop. Now, he's a professor of criminology at Loyola Univerity, and he's seeing similar staffing problems around the country.

"What that results in is a police department that can only be reactive," Serpas says. "There are the occasional proactive measures that can occur in a department as under-staffed as the NOPD, but it cannot maintain it. It cannot maintain that proactiveness that sends a message to the brazen criminal that there is a greater certainty of capture."

But even if the NOPD were fully staffed, its focus on homicide might have wandered. As Jeff Asher points out, that's happened in other cities that have tried the "focused deterrence" approach over the years. The reality is that the strategy takes a lot of effort from rolling investigations to bureaucratic coordination between local and federal agencies.

The Delicate Politics Of Rising Crime

"It's hard to do call-ins and indictments," Asher says. "And after you've had this first success, it's hard to sort of build on that. I don't know necessarily know that it's a loss of political willpower, but I think sort of built into the strategy is this difficulty in maintaining momentum."

And when it loses momentum, there's a cost. That's because the researchers who developed "focused deterrence" say the long-term objective is to re-establish the social contract between the police and communities where violent crime is high. The idea is to make it clear that the system cares about these homicides — even if it's "bad guys killing bad guys." 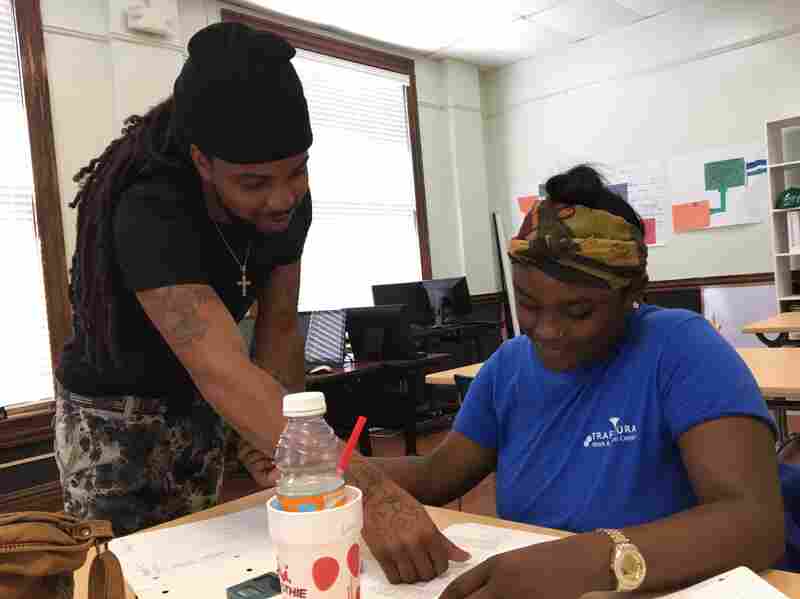 Darren Alridge works as a "para-instructor" at the Youth Empowerment Project. He says police have yet to convince him that they're serious about bringing killers to justice in his community. Martin Kaste/NPR hide caption 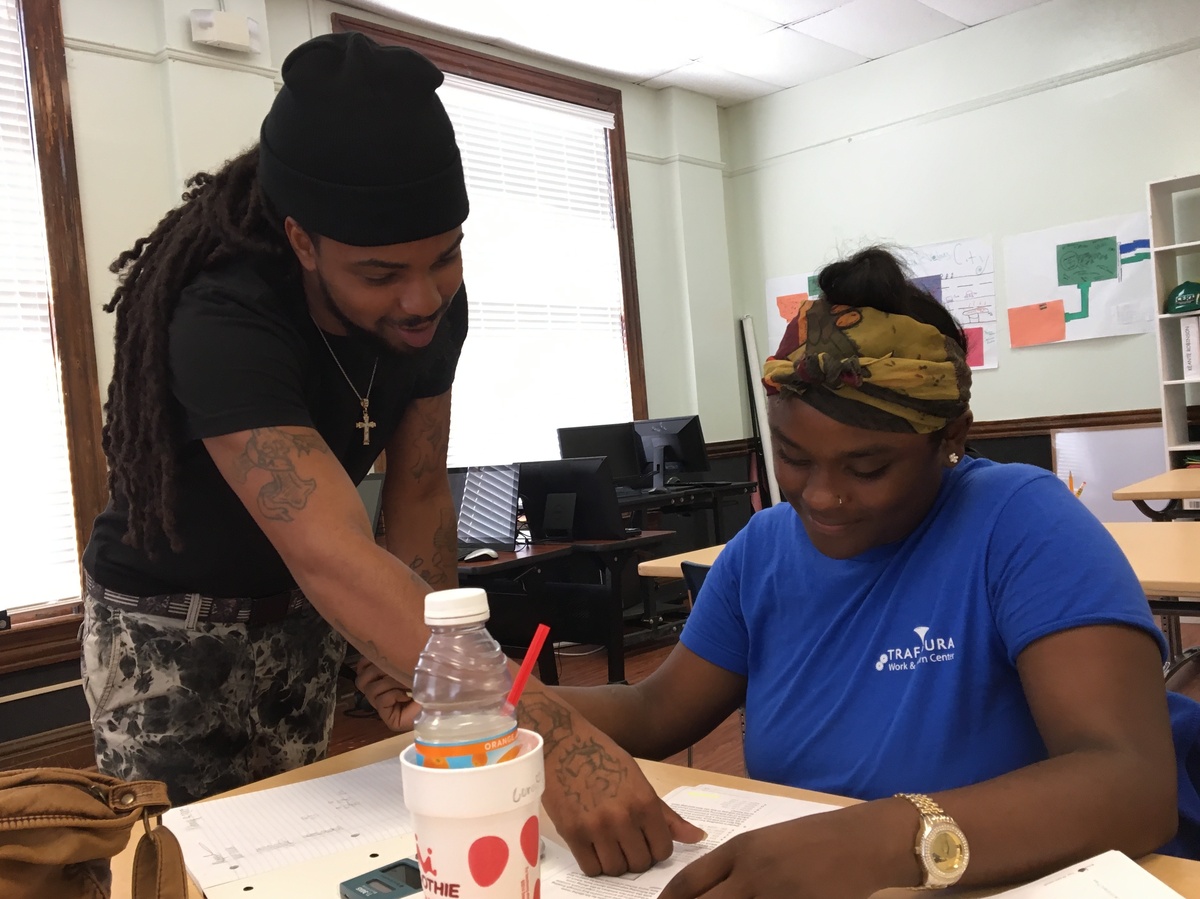 Darren Alridge works as a "para-instructor" at the Youth Empowerment Project. He says police have yet to convince him that they're serious about bringing killers to justice in his community.

So far, New Orleans' efforts have not rebuilt trust in the police for Darren Alridge. As young man who came of age after Katrina, he had a brush with the law, then got things back on track and now has a job tutoring kids at an organization called the Youth Empowerment Project.

"As a young black man, I always thought, you know, the police system was made to fail us, was made to lock us up, was made to keep us away from our family," he says.

He's still convinced that police focus on what he calls "petty crime," smaller violations that tag young people with criminal records and make them unemployable. In the meantime, he says, killers go unpunished — including the people who've killed members of his family.

"And half of them that's dead, we still ain't get justice from it," Alridge says.

And that sense of indifference from the system is what tempts people to take justice into their own hands — the spiral of retaliation that drives the homicide rate in cities like New Orleans.