Accessibility links
In Eastern Virginia, Mixed Feelings on Trump's Trans Restroom Guidance Gloucester County, Va., is embroiled in a battle over transgender restrooms. The case of one of its high school students is slated to be argued before the Supreme Court next month. 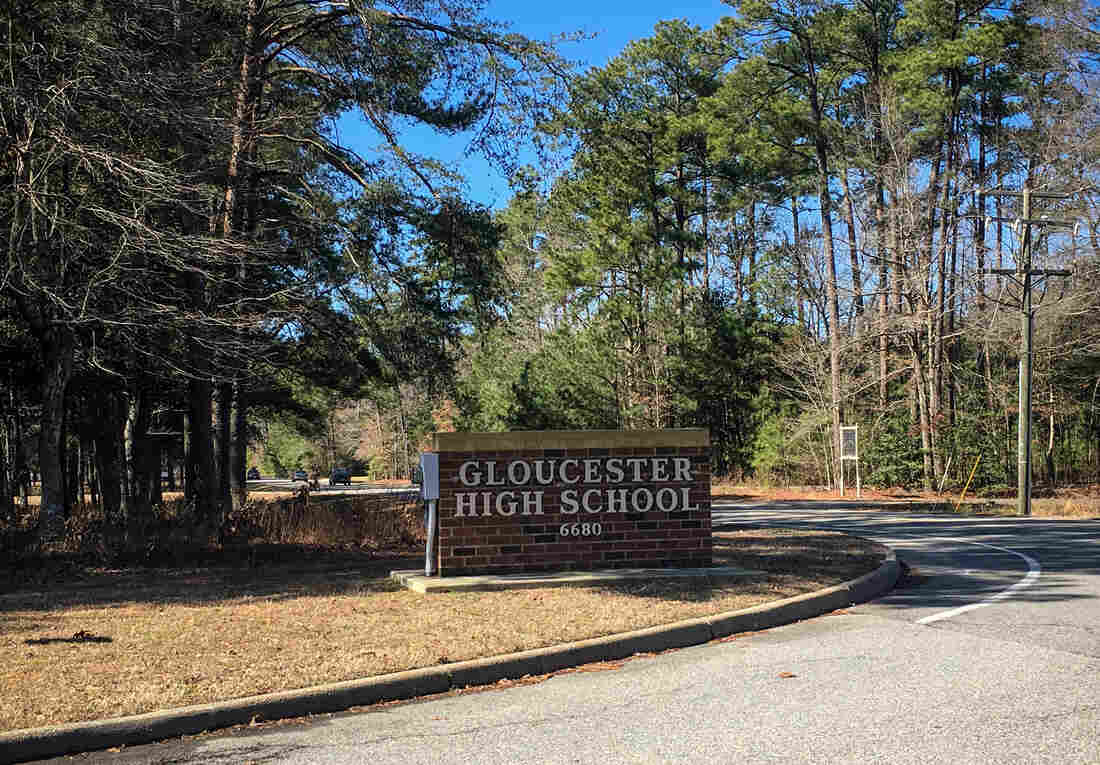 Gloucester County High School in eastern Virginia is the school at the center of a debate over transgender restrooms pending before the U.S. Supreme Court. Sarah McCammon/NPR hide caption

The debate over transgender restrooms is nothing new in Gloucester County, Va. The largely rural county in the eastern part of the state is the home of Gavin Grimm, whose transgender-rights case is pending before the U.S. Supreme Court.

It's an area that voted overwhelmingly for President Trump in November. His administration has issued guidance rolling back protections for transgender students like Grimm — a policy popular with residents like Marshall Butler. The retiree says the county school board made the right call in refusing Grimm's request to use the boys' restroom.

"I don't think we should make rules for anybody special," he says.

Butler said Grimm, who identifies as male, should use the separate, unisex restroom provided by the school – or use the girls' restroom.

That view is shared by Brian Hopkins, a cabinetmaker who lives in neighboring Mathews County. 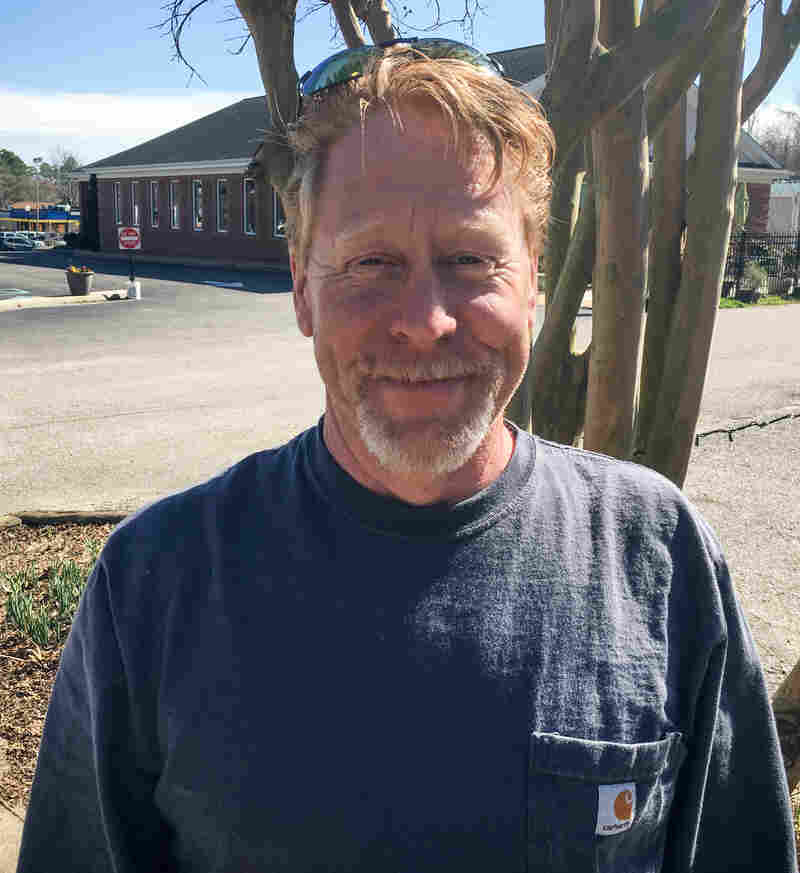 "I think the child is very confused," Hopkins said of Grimm. "Biologically, we are who we are. It just should be that simple."

Outside a local diner in Gloucester County on Thursday afternoon, Hopkins said he'd never spoken at length with a transgender person. But he said his interpretation of Christianity leads him to oppose LGBT rights.

"I typically wouldn't associate myself with someone confused like that," Hopkins said.

He agrees with the Trump administration's decision to overturn guidelines issued under President Obama, which allowed students to use restrooms matching their gender identity.

"It'll give peace of mind to the other 99.9 percent of the students at the school, as well as the teachers, rather than we change our whole outlook on life toward that one child," Hopkins said.

For trans high school and college students from eastern Virginia, the guidance from the Trump administration is alarming.

There's not much in the way of LGBT-rights groups in Gloucester County. But about an hour's drive away in Norfolk, Alex Laubert, a Navy veteran, is studying automotive technology at Tidewater Community College, where he's involved in a club for LGBT students. He hopes to begin transitioning to male soon, through hormones and surgery. 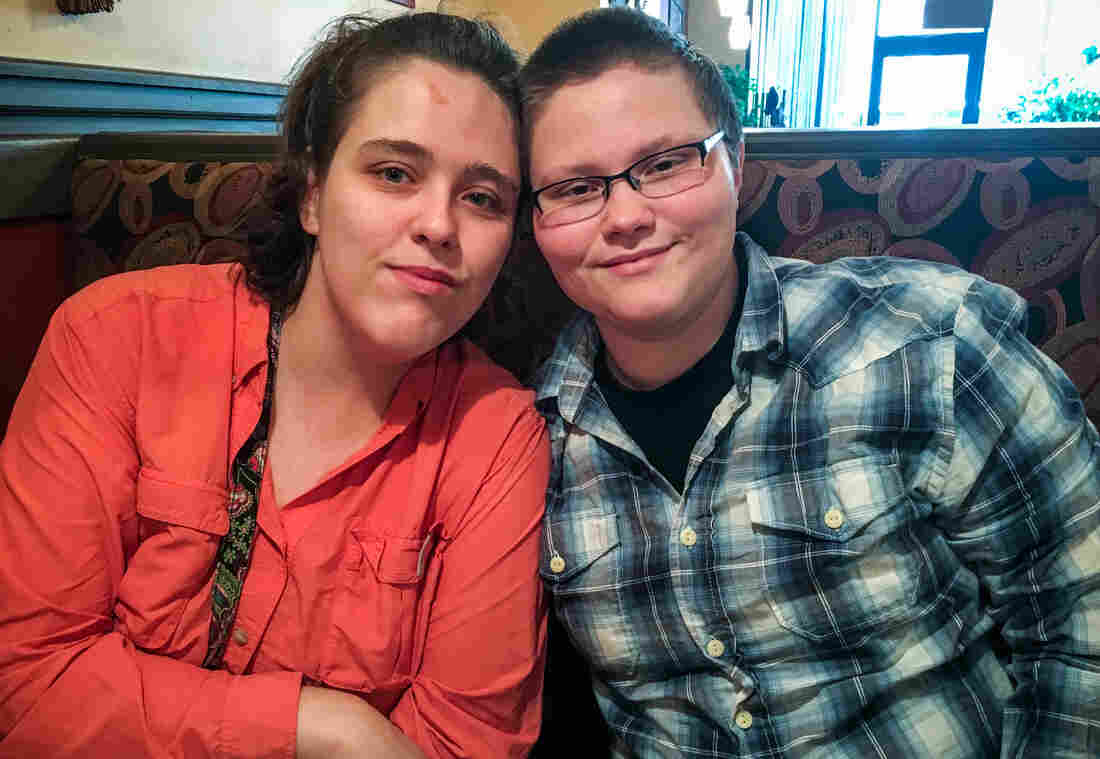 Laubert, who prefers male pronouns, grew up in Cunningham, Tenn., in "a very, extremely religious household," where he says he faced harassment because of his sexuality and gender identity. Sitting with his wife at a café in Norfolk, Laubert recalled crying and praying as a young child that he would become a boy. He finally felt "at peace" and "freed" when he came out recently as transgender.

Laubert says he and his wife, Sonia Murden, didn't vote in November and don't pay much attention to politics. But he's concerned about how the Trump administration guidance could affect teens in similar situations.

"It's making it worse for people who are in high school, or in middle school like I was, and hiding it, because we're in an area that we're not safe or protected," Laubert said. "You're afraid to come out because you're afraid you could be bullied; you're afraid everyone's going to tell you that you're going to hell, you're an abomination."

Even now, Laubert said he usually avoids public restrooms because he's uncomfortable in them.

Bjorn Mustard, a 15-year-old from nearby Chesapeake, Va., calls Trump's guidance on transgender restrooms "a bit of a slap in the face" to people like him. 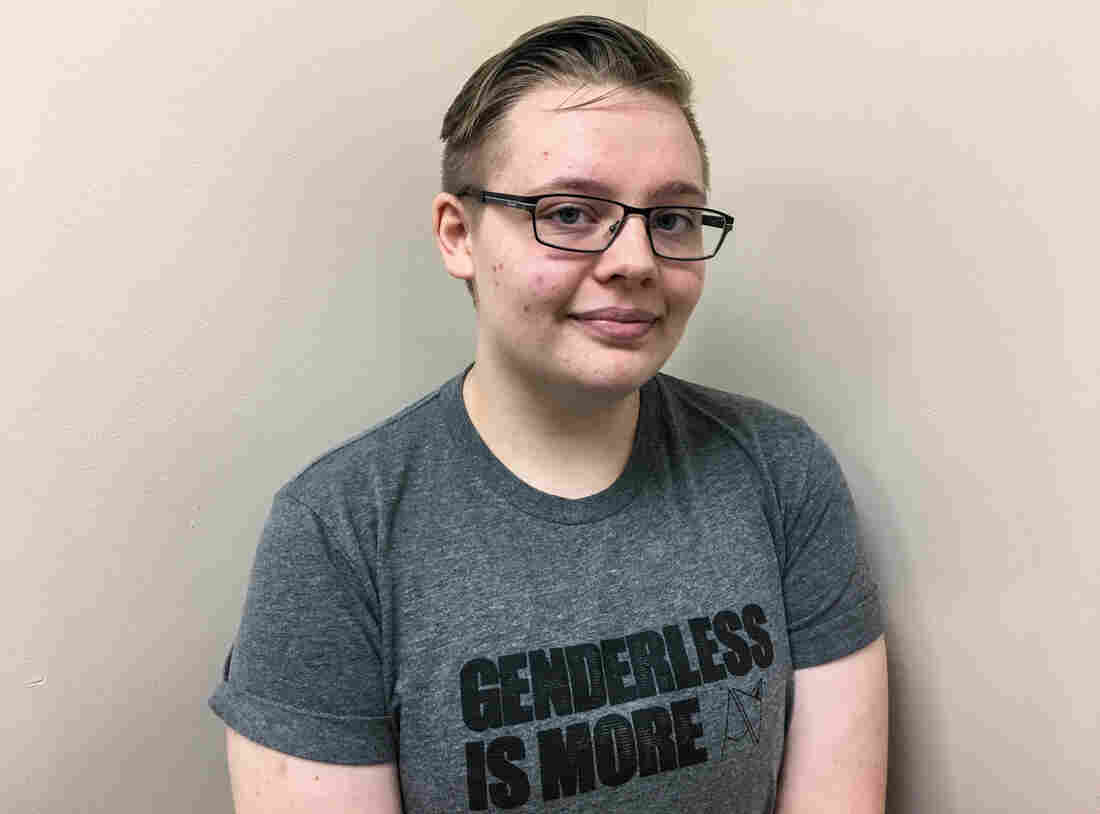 Mustard identifies as male. He uses a separate, private bathroom – an accommodation he requested from the school. He doesn't participate in physical education classes because he's uncomfortable changing in front of other students.

Mason Beck, an 18-year-old high school senior from Norfolk, prefers to use a private, gender-neutral restroom at his school. He came out as trans in January and is preparing to begin hormone therapy to transition to male.

Beck said he doesn't feel comfortable in the boys' restroom, and he worries about making female classmates nervous if he uses the girls' restroom.

Beck worries that protections have now been stripped away, leaving transgender students more vulnerable to bullying.

"It's kind of made me more scared, because I'm concerned about myself and other trans people in the community," he said. "We just want to use the bathroom. I don't really understand why that's such a problem."