Accessibility links
After 75 Years, Here's Looking At You, 'Casablanca' Did you know Humphrey Bogart had to stand on a box for scenes with tall Ingrid Bergman? NPR's Susan Stamberg visited the soundstage where the 1942 classic was filmed — and returned with stories. 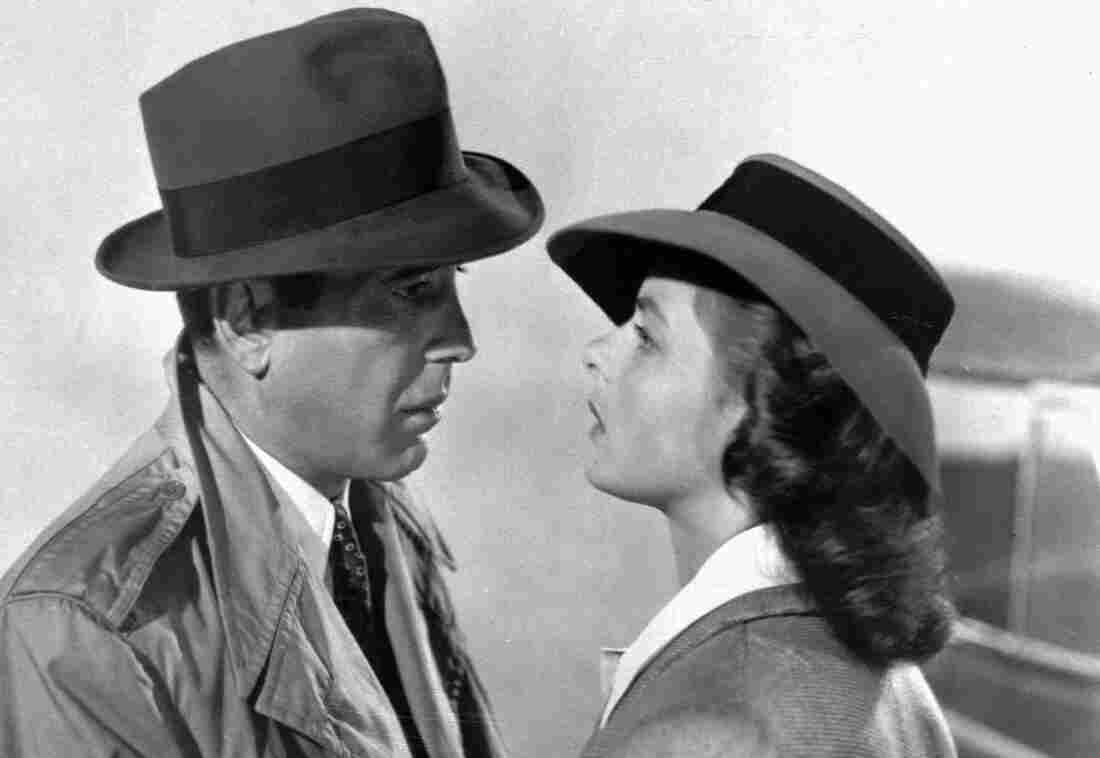 The classic film Casablanca marks its 75th birthday this year. One little known fact? Humphrey Bogart was shorter than Ingrid Bergman, so he had to stand on a box during filming. Warner Bros./AP hide caption 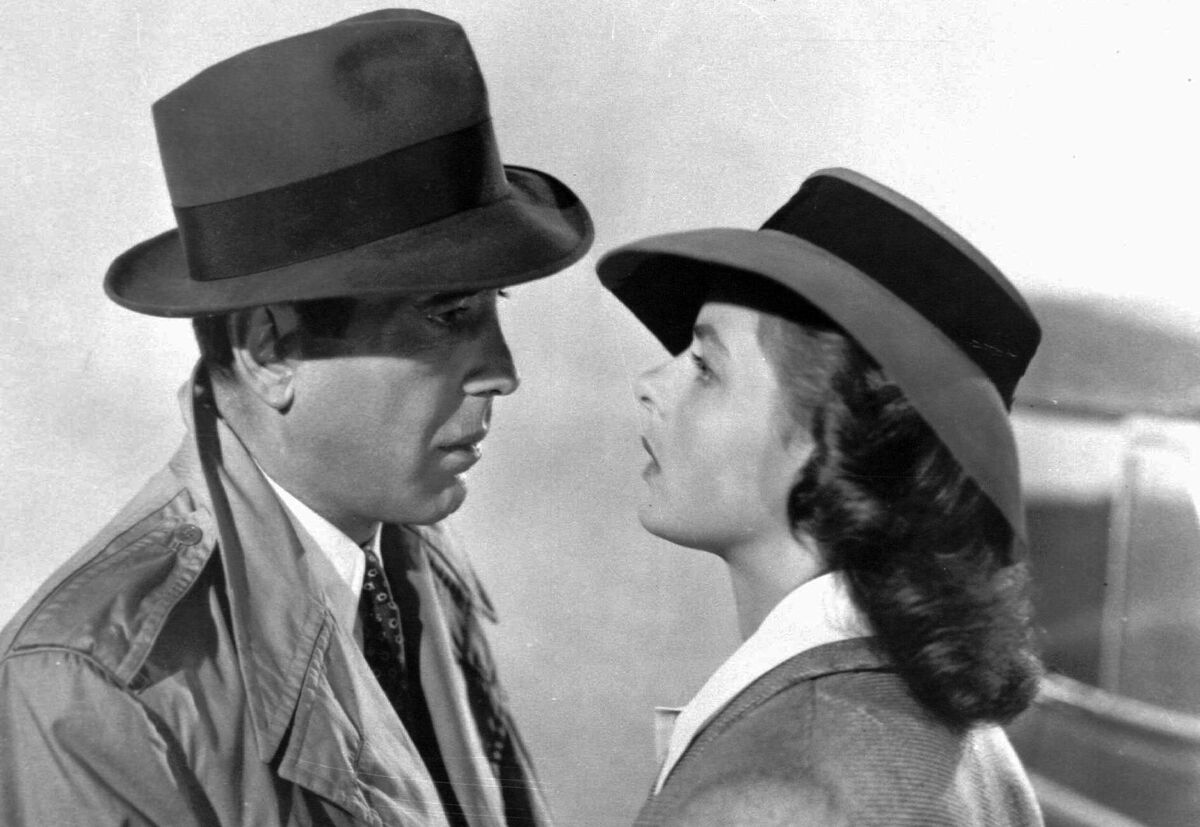 The classic film Casablanca marks its 75th birthday this year. One little known fact? Humphrey Bogart was shorter than Ingrid Bergman, so he had to stand on a box during filming.

As Oscar night approaches, a beloved multi-Oscar-winning classic is turning 75. In 1942, the World War II romance Casablanca brought glory to Warner Bros., and stardom to its leading actors. The Burbank, Calif., soundstage where the movie was made doesn't look like much, but it has taken on a legendary status of its own. 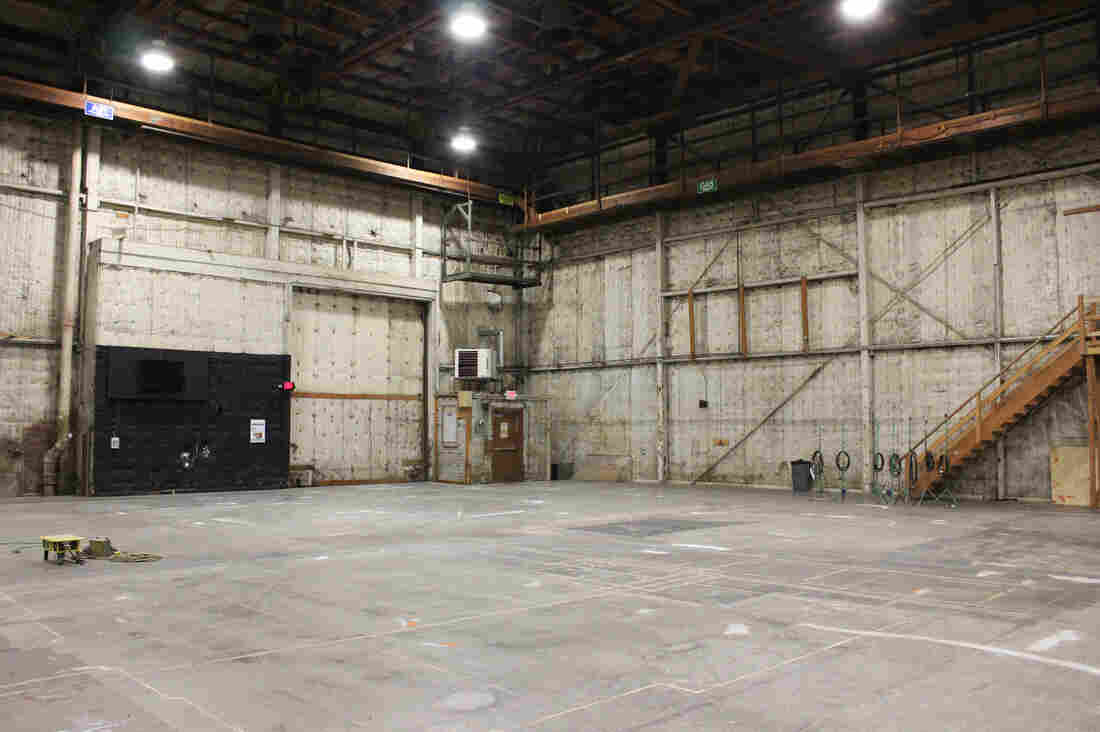 It may not look like much, but three best picture winners and 10 best picture nominees were filmed on Stage 7 (aka "Lucky Seven") in Burbank, Calif. Danny Hajek/NPR hide caption 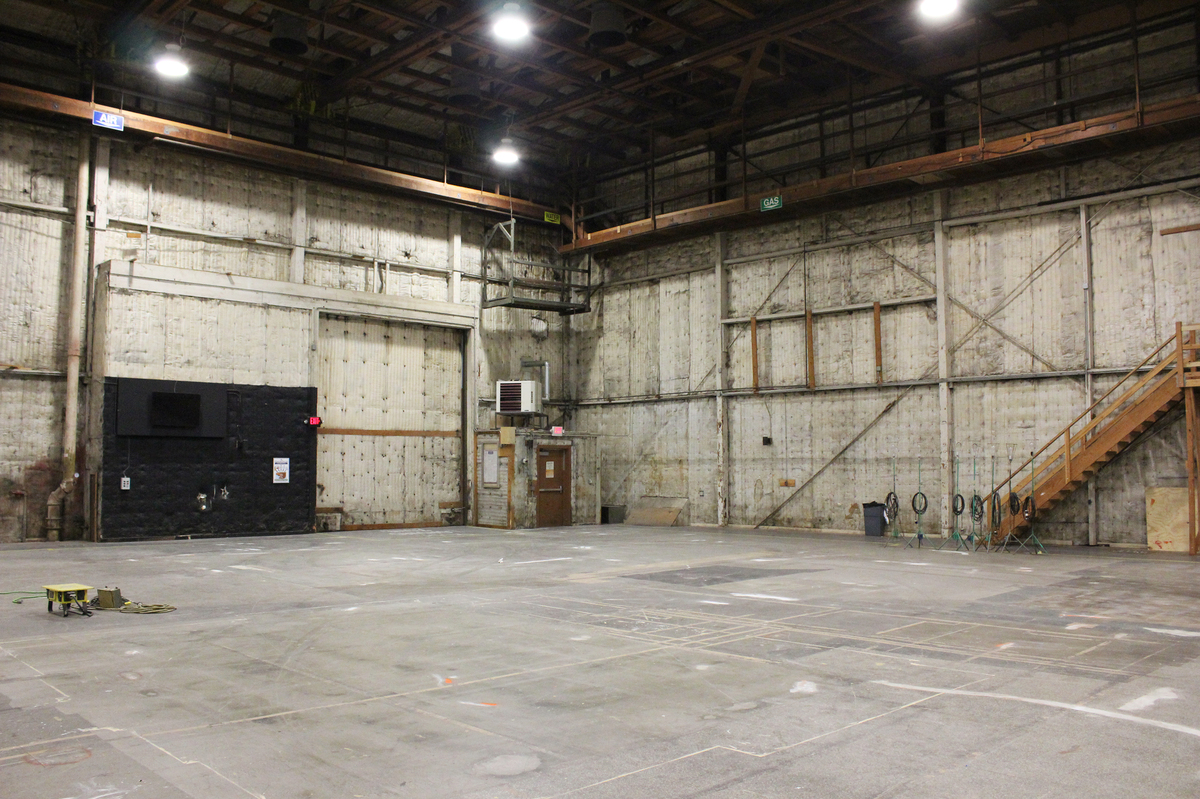 It may not look like much, but three best picture winners and 10 best picture nominees were filmed on Stage 7 (aka "Lucky Seven") in Burbank, Calif.

To get there, Kourounis drives visitors along streets lined with facades — banks, apartment buildings, the coffee shop where Emma Stone works in La La Land. On one corner stands a tan building that doesn't look like anything special.

"As far as we know that is the last remaining exterior set from Casablanca," Kourounis explains. It was on this corner that Rick Blaine (that's Humphrey Bogart) and Ilsa Lund (Ingrid Bergman) learned the Germans were approaching Paris. 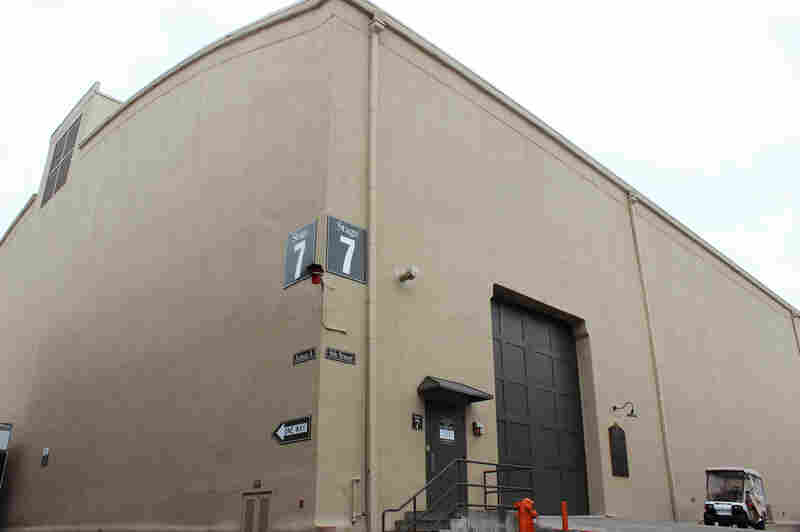 Stage 7, a giant soundstage on the Warner Bros. studio lot, was home to many classic films and is still in use today. Danny Hajek/NPR hide caption 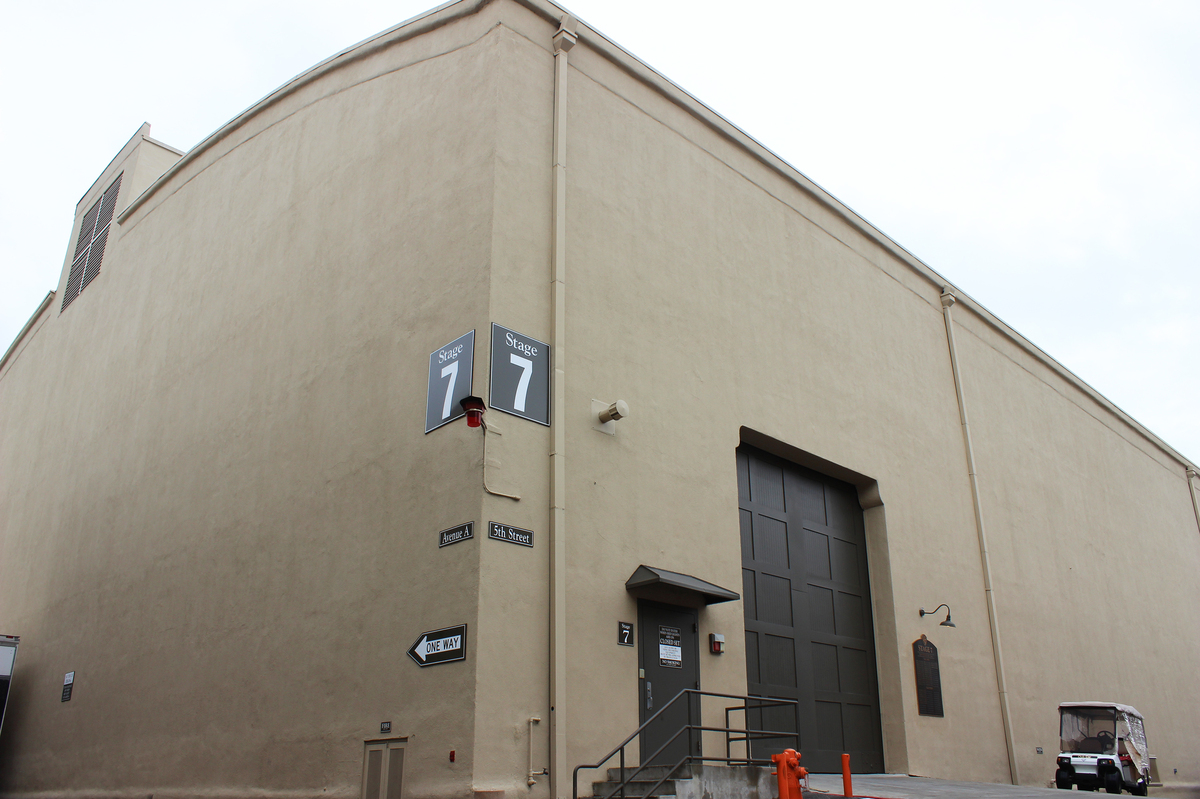 Stage 7, a giant soundstage on the Warner Bros. studio lot, was home to many classic films and is still in use today.

Rick's Café, with Sam at the piano, taking requests ... the idealism, nobility, sacrifice and patriotism ... it all happened on Stage 7. But inside, the big stage (it's a fourth of a football field) looks like a warehouse. Not a hint of romance to be found — just a crew, getting ready to shoot a TV commercial.

Most, but not all, of Casablanca was made on Stage 7. Since most of the story takes place in Rick's Café, that $76,000 set remained in Stage 7 throughout the filming. Other scenes had to be done on different soundstages.

Because of World War II, and the sighting of a Japanese submarine off the coast of California, the movie was mostly shot indoors.

"People were terrified that the Japanese would attack the mainland," says Aljean Harmetz, author of the 1992 book Round Up the Usual Suspects: The Making of Casablanca.

So no location shooting, no nighttime shooting, no car chases. Shortages meant they had to do without movie-making basics, such as rubber and aluminum.

"Costumes had to be made differently," Harmetz explains. "You couldn't have nylons any longer. Bergman couldn't wear silk — she had to wear cotton. A lot of what Hollywood took for granted — particularly the luxurious things — that dressed its female stars didn't exist in the war years."

The war affected casting. Paul Henreid, who plays resistance fighter Victor Laszlo, was Austrian. Half the film's small and medium roles were played by war refugees.

It's ironic, says Harmetz. "All of these refugees from Nazi Europe found a lot of roles for the next four years playing Nazis in the movies."

Bergman had also come from across the Atlantic. Born in Sweden, she'd made a few films there, and a few more in the U.S., but Harmetz says this was the movie that made her an American star.

Bogart — a native New Yorker — had been cast as a gangster in several Warner films. Now he was playing a cynic, unwilling to get involved in a wretched war, still missing his lost love. Bogart wasn't crazy about the part. "He thought his character was too full of self pity," Harmetz says.

Bogart was a loner — a tough, avid drinker, unhappily married to his third wife (the one who came right before Lauren Bacall).

"She drank an immense amount and she threw things a lot," Harmetz says.

'We'll Always Have Paris': The Music of 'Casablanca'

And, despite all that, Casablanca made Bogart a romantic lead and a huge star. (Never mind that he was short — he had to stand on a box for his scenes with the tall Miss Bergman.)

"After the movie was made, suddenly everyone thought that Bogart had sex appeal," Harmetz says. "And he told Lauren Bacall, 'I did nothing in Casablanca that I hadn't done in 30 other movies and suddenly they say I have sex appeal.' Well, when Ingrid Bergman looks at you, you have sex appeal."

The script of Casablanca was by Julius and Philip Epstein and Howard Koch, and it went through many changes and revisions. For ages, the ending wasn't known. Bergman said while shooting was underway she asked director Michael Curtiz and the writers which man she goes away with — her onetime Paris lover Rick Blaine, or the noble freedom-fighter Victor Laszlo. Bergman was told they'd let her know as soon as they knew!

The decision was at last revealed in an airport scene, as the couple leaves Casablanca. Because they couldn't shoot outdoors, Hollywood magic saved the day. Craftsmen built a plane — a very small plane — out of plywood.

"In order to make it look real, they hired very small men to act as mechanics so that, from the distance, it looked like a real airplane," Harmetz says. "In order to disguise the cutout even more, they poured fog into the scene."

Piano Made Famous In 'Casablanca' Goes On Auction Block

Piano Made Famous In 'Casablanca' Goes On Auction Block

And into that foggy darkness, after the plane takes off, the final words of the film — "I think this is the beginning of a beautiful friendship" — are spoken. This time the work of another author — producer Hal Wallis, who came up with the line two weeks after production was over!

The end of a beautiful, Oscar-winning film, made mostly on Warner Bros.' Lucky 7 soundstage in 1942. Seventy-five years later, it still feels powerful, moving and romantic. How lucky we are, this Oscar season, that we'll always have Casablanca.