Accessibility links
Cap-And-Trade: Environmental Justice Groups Say California's Climate Program Has Not Helped Them California's signature climate plan is under attack from environmental justice groups. Some say the cap-and-trade program hasn't done anything to clean up the air in low-income communities. 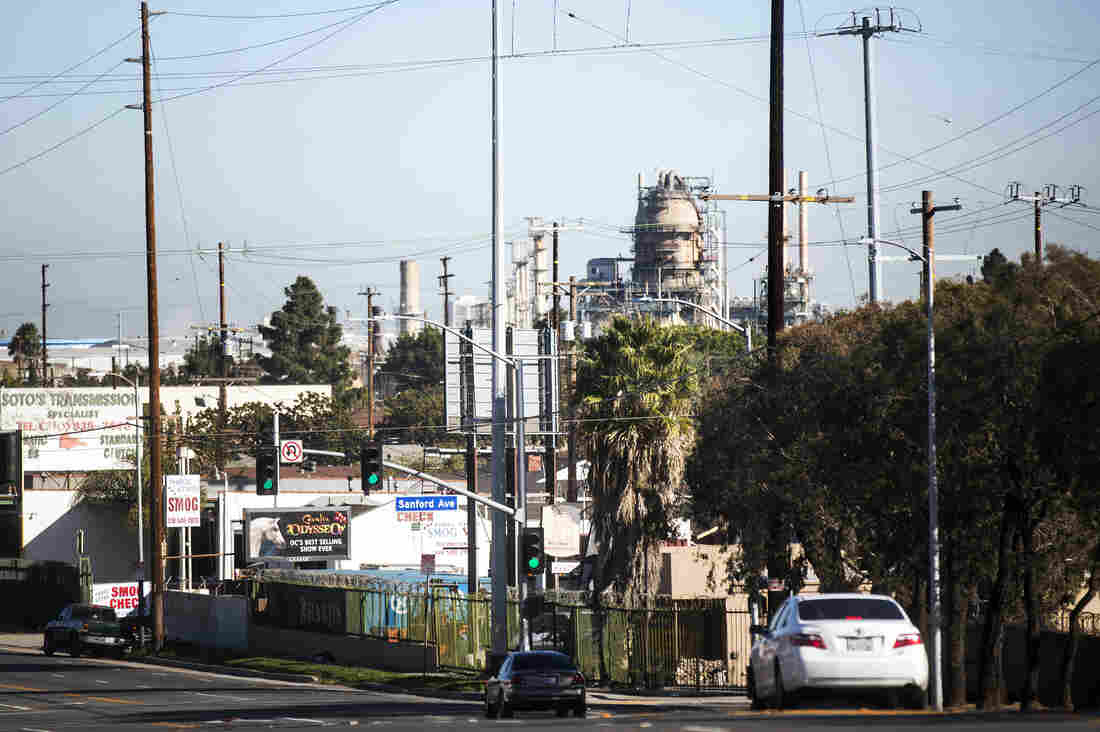 Some environmental justice advocates say California's cap-and-trade program hasn't done anything to clean up the air in low-income communities like Wilmington, where refineries are located near residential neighborhoods. Maya Sugarman/KPCC hide caption 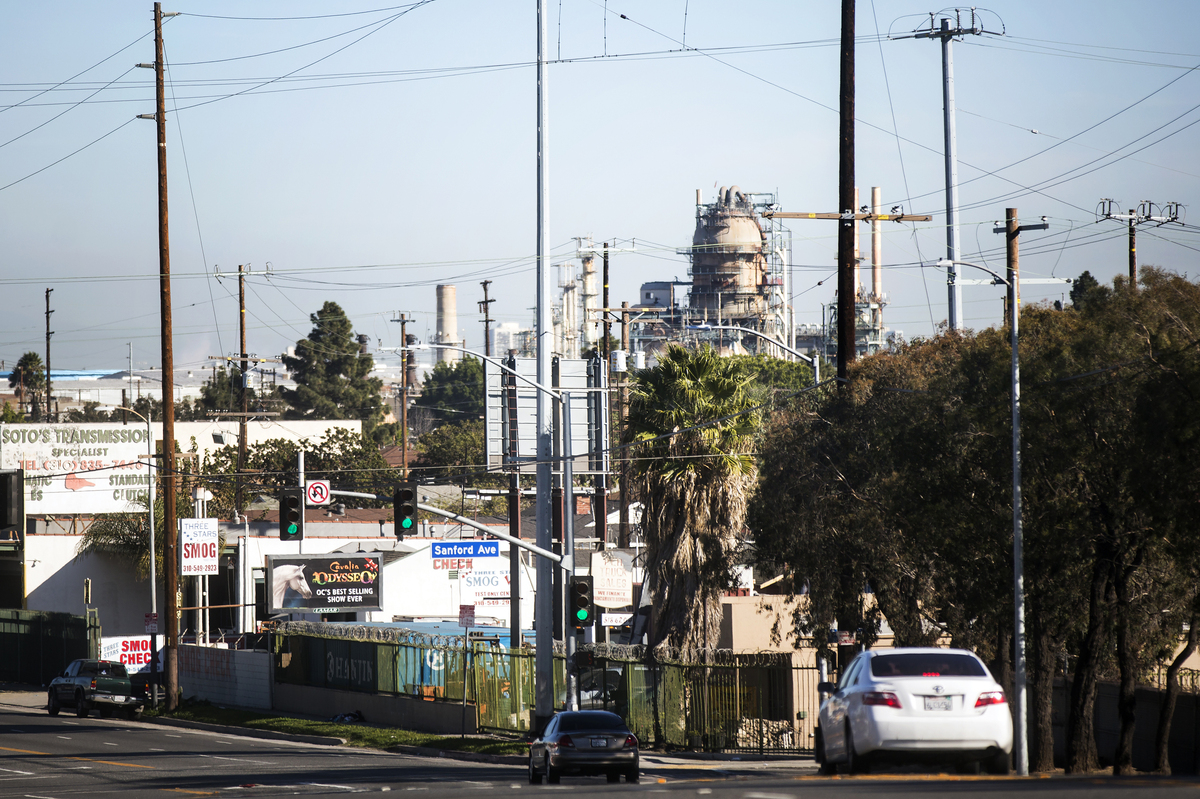 Some environmental justice advocates say California's cap-and-trade program hasn't done anything to clean up the air in low-income communities like Wilmington, where refineries are located near residential neighborhoods.

In the Wilmington neighborhood of Los Angeles, residential streets dead end at oil refineries. Diesel trucks crawl through, carrying containers from nearby ports. Longtime resident Magali Sanchez Hall says the pollution from all that has taken a toll, right on the street where she lives.

The state's own research finds people in Wilmington are about twice as likely to get cancer as the average person in greater Los Angeles. That's not because of the carbon dioxide coming out of smokestacks. It is mostly due to diesel fumes, but also the toxic chemicals that mix with the greenhouse gas emissions of refineries.

Sanchez Hall wipes her finger across the hood of a car and holds it up. "Black dust," she says.

Given all this, you might think Sanchez Hall would be excited about California's so-called cap-and-trade program, which aims to get polluting companies, like the refineries here, to reduce emissions. But she and others say the state's signature climate change program is failing them.

"When I first heard about cap-and-trade, I couldn't conceive how pollution had become a commodity to profit from," says Alicia Rivera of Communities for a Better Environment.

Under the program, California sets an overall cap on carbon emissions. In order to meet it, companies have three choices: cut their emissions directly; buy and sell permits that allow them to keep emitting; or make up for their emissions by reducing emissions somewhere else. That last option is called an "offset" and environmental justice activists like Rivera hate it the most.

"We don't care if they have a project for tree planting elsewhere," she says. "When are they going to reduce pollution here?"

A recent study finds that emissions in places like Wilmington actually increased during the first two years of the program.

California's cap-and-trade system faces other challenges, including a lawsuit by the California Chamber of Commerce, which alleges the program is an illegal tax unless it garners two-thirds approval in the legislature. Gov. Jerry Brown is urging lawmakers to give that approval, and extend cap-and-trade beyond 2020.

But some lawmakers are sympathetic to the environmental justice position. And some advocates recently declared they will "fight at every turn" efforts to extend cap-and-trade, and push instead for something that guarantees direct emissions reductions.

Those who run the cap-and-trade program say they are listening, and acting. "It's probably premature to try to judge the program's total effectiveness at this point because it hasn't been in effect very long," says Dave Clegern of the California Air Resources Board. But he says the board is proposing that refineries cut their emissions by 20 percent.

Still, the state says it also wants to keep cap-and-trade, which a recent legislative report deemed the "likely most cost-effective" approach to reducing greenhouse gases. Clegern says auctioning off carbon credits also generates a lot of money, and by law, half of it must benefit people living in disadvantaged communities. "What we have basically is a balancing act," he says, "where we need to be able to keep the economy alive, [and] keep public health improving."

The state's Air Resources Board will consider whether and how to amend its cap-and-trade program in June.

But in Wilmington, some are losing patience. Longtime resident Magali Sanchez Hall says the polluted air affects even her smallest daily decisions, like where to work out. "I try to come to exercise here at this park," she says, driving down her street. "But it just feels weird to be exercising and breathing all this, you know? It's just weird."