Accessibility links
What To Expect From Trump's Tuesday Speech To Congress When he enters the historic chamber and re-enacts the ritual on Tuesday, he will be stepping into a dimension of real and limitless consequences — one in which he is still a celebrity apprentice. 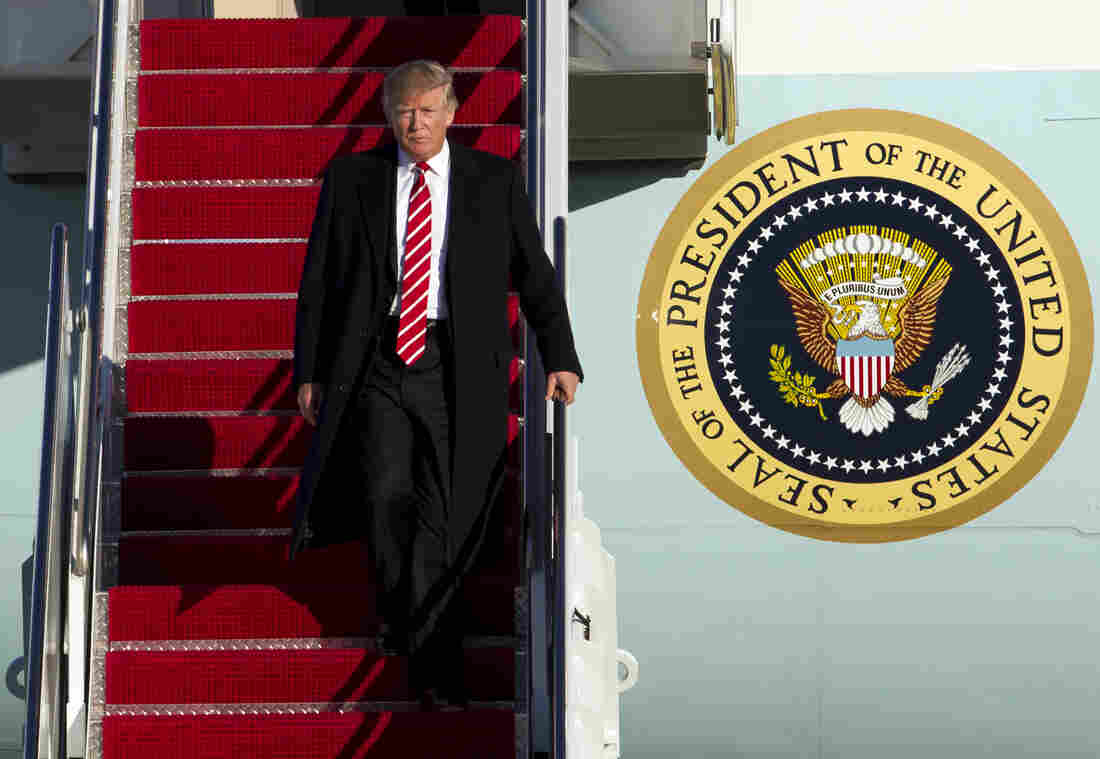 President Trump walks down the steps of Air Force One upon his arrival at Andrews Air Force Base, Md., on Feb. 6, returning from a weekend trip to Florida. Jose Luis Magana/AP hide caption 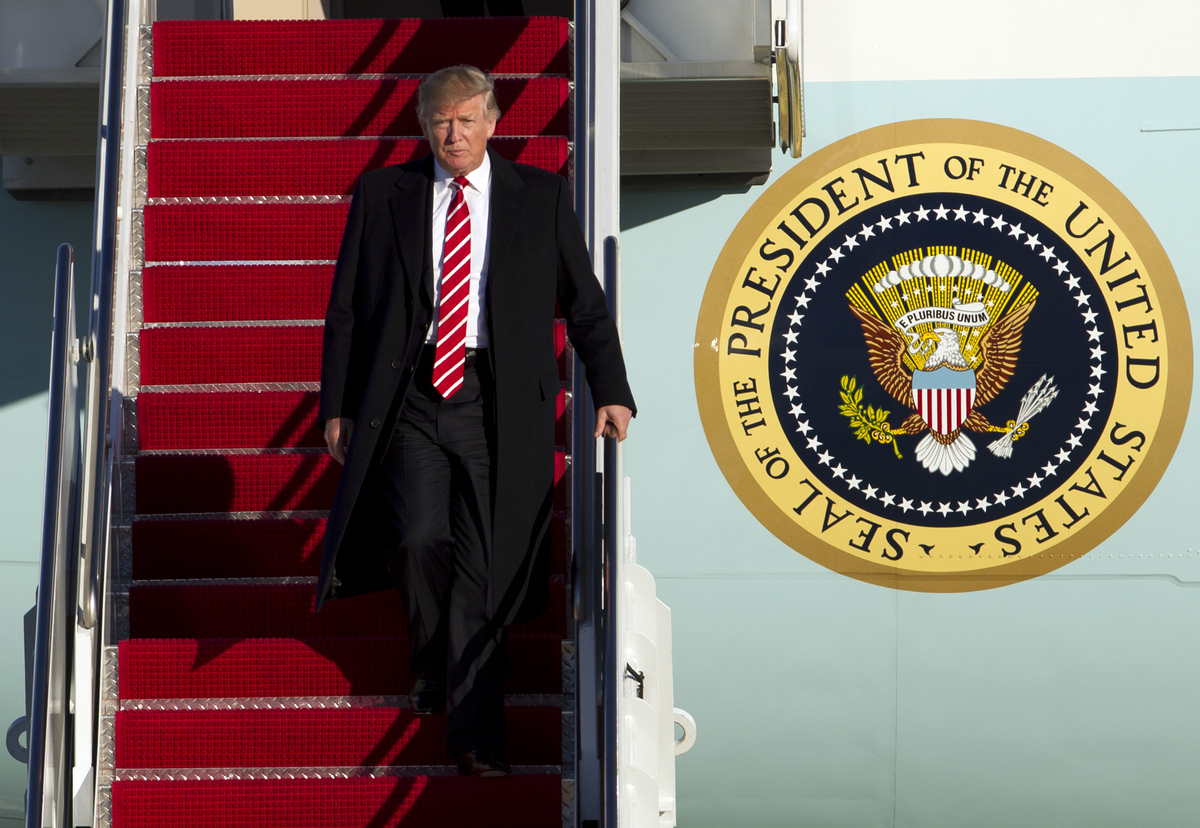 President Trump walks down the steps of Air Force One upon his arrival at Andrews Air Force Base, Md., on Feb. 6, returning from a weekend trip to Florida.

On Tuesday night, President Trump will address a joint session of the Congress for the first time, laying out his case for making the agenda of his campaign the law of the land.

He will talk about controlling immigration, cutting taxes, abolishing regulations, repealing the Affordable Care Act, pulling out of multinational trade agreements and spending more on defense and homeland security. He may also talk about his disdain for much of the news media and bring up social issues such as abortion.

He will be addressing the members of the House and Senate, his Cabinet and the Supreme Court. But his real audience will be far larger, reaching across the country and around the world via broadcast and streaming media. Even after decades in the public eye, Trump has never had a moment of global exposure quite like this.

Thanks to both conventional and social media, he has become the most famous human on the planet — a daily obsession for his implacable foes as much as for his fans.

But on this night, he will be speaking to an even greater audience. He will be speaking to history. The occasion of the first address to Congress has provided some of the most memorable moments in our shared national memory. (It is called an "address to a joint session" because the constitutionally required report on the "state of the union" is customarily given after at least a year in office.)

When Trump enters this historic chamber and re-enacts the ritual of such events, he will hear the House doorkeeper crying out, "Mr. Speaker ... the president of the United States!" He will himself be entering a dimension of real and limitless consequences — one in which he is still a celebrity apprentice.

Serious questions are still swirling around the month-old administration, its policies and management. These arise from a host of issues and surround an ever-changing cast of players. But the most profound questions are posed by the new chief executive himself — his combative personality and his penchant for controversy, his loose use of language and his often casual handling of facts.

Among the errors many of us made in contemplating Mr. Trump in 2016 was the assumption that he would moderate his personal style to seem more like a conventional White House candidate — more "presidential."

There were passages of relative restraint, notably in the last two weeks of the campaign. But Trump always returned to playing himself. If he did this even at the risk of losing the election, why on earth would he change now?

Still savoring his extended moment of triumph, Trump will be expected to recount his Electoral College victory and suggest, as he regularly does, that it was the will of a majority of the voters — perhaps even a large majority. He will be expected to depict the contrast between life in the U.S. today and life under previous presidents as a walk into the light after many years in darkness.

But this speech may not be quite the tour of blighted landscape Trump gave in his "American carnage" speech at his inauguration on Jan. 20. This week the White House has hinted at a different mood, using words such as "sunny" and evoking the memories of President Reagan's often heart-tugging rhetoric in his speeches to Congress and the nation.

We can expect to hear more about what's going right in America.

Trump will have had just 40 days and 40 nights in office, but he has been taking credit for positive developments in the economy since his election in November. He has attributed the stock market rally that began late last year to the boost that business sentiment got from his win. He often touts news of corporate plans for jobs in the U.S., especially in manufacturing, as the fruits of his fresh administration.

President Trump At CPAC: 'The Era Of Empty Talk Is Over'

And that would make a great segue into talking about the to-do list the White House has for Congress, including changes to health care and taxes. But the speech is not likely to devolve into a catalog of policies and programs as we have sometimes heard in State of the Union moments. That would be too prosaic for the moment, or for the showman in Trump.

We should expect, rather, to hear more of the muscular talk with which Trump concluded his speech to the Conservative Political Action Conference on Friday.

"America is coming about, it's coming back," he told the riled crowd of activists. "It's roaring; you can hear it. It's going to be bigger and better and stronger than ever before."

In one form or another, all presidents have used this kind of hopeful hyperbole. And it has the added benefit of moving the members of the Congress to go beyond the usual waves of polite applause. On the Republican side, there will be repeated standing ovations, with cheering and, yes, perhaps even roaring.

They may not file in wearing red "Make America Great Again" caps, but on the other hand, they might.

It will make a great demonstration of enthusiasm and approval. And it will also serve to highlight the lack of either on the Democratic side.

In fact, the distinct lack of participation by Democrats may be so dramatic as to be historic in its own right. Democrats are not only aware that Trump lost the popular vote by millions, they have seen the polls this week showing him with lower approval from the public than any new president since polling began. Several major national polls have shown him below 40 percent.

Joint sessions of Congress have sometimes brought forth restive behavior from the ranks of the opposition party, but usually at a later point in a presidency.

For example, after winning the majority of seats in the House and Senate in 1994, Republicans relished their next encounter with President Bill Clinton in early 1995. A few in the first rows of House members that night were rowdy enough during the speech to sound like hecklers.

And when President Obama was proposing what became the Affordable Care Act in 2009, one junior Republican from South Carolina blurted out his objection ("You lie!") so loudly that the president paused in mid-speech.

Neither of those occasions, however, was the initial appearance of a newly elected president. Usually, the new president is accorded a measure of respect and admiration for having won the highest office in the land.

This has been the case even when most of the members of Congress have not been from the president's party. For example, when Richard Nixon gave his first speech to Congress early in 1969, both the House and Senate had clear Democratic majorities. The same held true when George H.W. Bush gave his first address of this kind 20 years later.

In between, Ronald Reagan's first joint session appearance in 1981 featured a Senate that had just turned Republican but a House that was still nominally Democratic. Both chambers would do his will in those early years of his presidency, however, and Reagan's big speeches to their joint sessions were a big part of his legendary power over them.

The greatest audience enthusiasm, of course, has accompanied the first addresses when president and Congress are of the same party, as was the case for Obama in 2009 and Clinton in 1993. A special case was George W. Bush's first such address in 2001. The second president Bush had lost in the popular vote but prevailed in the Electoral College by virtue of winning Florida by 537 votes. He addressed a Congress that February that had a Republican House and a 50-50 Senate. He chose to make it an occasion of conciliation, much as his father had done a dozen years before.

Trump, of course, adds to the list of presidents who came to power with full control of both chambers. Will he use his first address to direct the efforts of those majorities? Will he reach out in some way to the hostile minority party?

Few may be expecting the latter. But many of Trump's own Republicans have been looking for greater specifics on the replacement of Obamacare or the reform of the tax code.

They may not want marching orders, but a sense of what the president wants to prioritize. House Speaker Paul Ryan for example was pleased this week when Trump again spoke of a 20 percent "border adjustment" tax as part of his new trade policy, an idea Ryan has counted on in his own budget projections.

Down the road, they will also need clearer ideas about the military build-up, the revamp of the Veterans Administration or the actual reality of a wall tracing the entire border between the U.S. and Mexico.

But on Tuesday night, the Republicans in Congress will have their majorities and a president they can be happy about for the first time since 2006. And that will be a good enough start on making at least one vision of America great again.