Accessibility links
Trump Will Be First U.S. President In 36 Years To Skip WHCA's Dinner The president tweeted that he will not attend this year's dinner. He'll be the first president to do so since Reagan missed it in 1981, after he was shot. 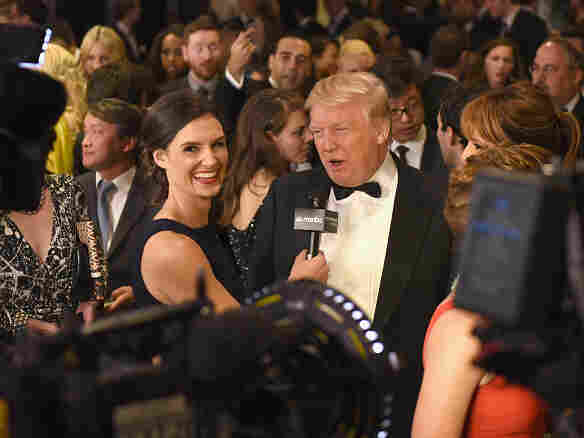 Donald Trump at the 101st Annual White House Correspondents' Association Dinner in 2015. He says he will not attend this year. Larry Busacca/Getty Images hide caption 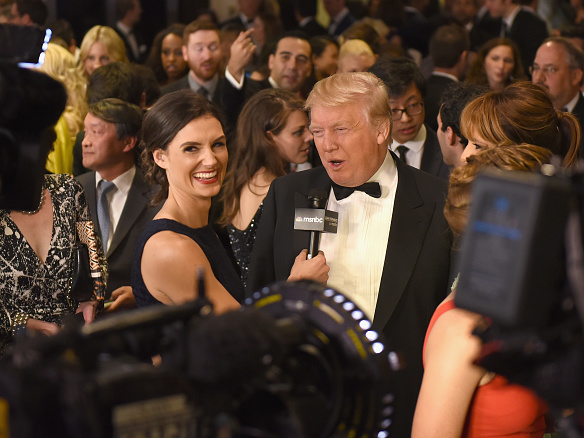 Donald Trump at the 101st Annual White House Correspondents' Association Dinner in 2015. He says he will not attend this year.

President Trump announced Saturday afternoon that he would break from a decades-old tradition and skip the annual White House Correspondents' Association Dinner scheduled for April 29.

I will not be attending the White House Correspondents' Association Dinner this year. Please wish everyone well and have a great evening!

"I will not be attending the White House Correspondents' Association Dinner this year. Please wish everyone well and have a great evening!" Trump tweeted.

On Sunday, White House deputy press secretary Sarah Huckabee Sanders told ABC's This Week, "This wasn't a president that was elected to spend his time with reporters and celebrities."

Sanders also addressed the major tensions between the president and the press. "I think it's kind of naive of us to think that we can all walk into a room for a couple of hours and pretend that some of that tension isn't there," she added. "You know, one of the things we say in the South, if a Girl Scout egged your house, would you buy cookies from her? I think that this is a pretty similar scenario."

The annual dinner, sometimes referred to — affectionately and derisively — in Washington as "Nerd Prom," honors journalism with awards and scholarships. The president is a major a draw to help in those efforts. What began in 1921 as a simple awards dinner evolved into a highly glamorized affair that attracts Hollywood stars.

The last president to not attend the dinner was Ronald Reagan in 1981. But he had a pretty good reason — he was recovering from being shot in an assassination attempt. Reagan did phone into the event and even joked about the shooting. "If I could give you just one little bit of advice," Reagan said from Camp David, the presidential retreat, "when somebody tells you to get in a car quick, do it."

He signed off with a light ribbing of the news media. "Well, I'm looking forward to the next news conference," he said. "I have so many questions to ask you all."

The last president to outright skip the event was Jimmy Carter, who did so twice — in 1980 and 1978. Richard Nixon also skipped it twice — in 1974 and 1972. Nixon warned the press he would do so and followed through. Trump called the press the "enemy of the American people," in a tweet recently. That echoes Nixon, who told the chairman of the Joint Chiefs of Staff, "The press is your enemy."

Trump's announcement comes at a moment of high tension between the White House and many news organizations. Trump has made attacking mainstream news organizations a staple of his public remarks. Trump and his White House have accused the New York Times, CNN and others of being an "opposition party" with which he is at war.

"The White House Correspondents' Association looks forward to having its annual dinner on April 29. The WHCA takes note of President Donald Trump's announcement on Twitter that he does not plan to attend the dinner, which has been and will continue to be a celebration of the First Amendment and the important role played by an independent news media in a healthy republic. We look forward to shining a spotlight at the dinner on some of the best political journalism of the past year and recognizing the promising students who represent the next generation of our profession."

White House chief strategist Steve Bannon on Thursday reiterated that the press was the "opposition party" at the Conservative Political Action Conference; Trump himself devoted a significant portion of his CPAC speech Friday to attacking the "fake news" media; and White House press secretary Sean Spicer gave access for a briefing to a group of mostly conservative-leaning news organizations that same day while shutting out some mainstream organizations.

The correspondents' dinner has been a place where the inevitable tension between the president and press is mostly put aside after a roasting. The president usually takes on the press corps in a lighthearted way before acknowledging its important role in a democracy — and the president in turn takes a ribbing from a famous comedian who headlines the night.

But in recent weeks, as relations between the White House and the news media have grown more strained, several news organizations have announced plans to not attend this year's dinner. BuzzFeed reported that CNN, which Trump has been pointedly attacking, might boycott, and Bloomberg canceled hosting a planned after-party, a longtime feature of the event in collaboration with Vanity Fair. Vanity Fair had pulled out earlier.

NPR and most other news organizations are still planning to attend.

Some news outlets, like The New York Times, have been skipping the event for years because, in part, of charges that the event depicts journalists as being too chummy with the president.

CBS's Major Garrett, the network's chief White House correspondent and a former board member of the correspondents' association, penned an op-ed in the Washington Post, in which he said he thought it was a bad idea for the press to skip the event. He concluded:

"If Trump represents a genuine threat to press freedoms, then [forgoing] the dinner doesn't change a thing. The right response, instead, is for reporters and news organizations to redouble their commitment to a WHCA dinner built around the journalism of the present and of the future."

According to WHCA website, the dinner has been held every year since 1921.

"The 50 men who gathered in the Arlington Hotel at Vermont Avenue and L Street on the north side of McPherson Square that evening could not have known that they were initiating a Washington tradition, one that would annually draw 2,600 people and a national audience a century later. It was Saturday, May 7, 1921 and this was the first White House Correspondents' Association Dinner."

There have been plenty of controversies surrounding presidents, yet they still attended, from the Iran-Contra weapons scandal in the 1980s during the Reagan administration to the Clinton impeachment. Bill Clinton attended all eight years, including before and after his 1998 impeachment following the Monica Lewinsky scandal.

The first president to attend was Calvin Coolidge in 1924. For years, the dinner had been headlined by cabaret singers and entertainers. The comedic roast didn't become a staple until 1983, but it has grown in popularity since, drawing together the odd couple of celebrities and the political news media.

A previous version of this story said the last president before Reagan to miss the dinner was Nixon in 1972. But Jimmy Carter skipped the dinner in 1980 and 1978, and Nixon also did not attend in 1974.