Accessibility links
Why It's Been So Warm On The East Coast The east coast saw record-breaking high temperatures this past week. Meteorologist Bob Henson talks with NPR's Lulu Garcia-Navarro about what's behind the early spring weather.

This is something that listeners on the East Coast know firsthand. This past week felt less like February and more like the Fourth of July. Temperatures were in the mid-70s here in Washington, D.C.

ANTONINO LEONARDI: Just, you know, you expect to have snow in February. It's just, like, shiny and beautiful, like 75 degrees.

LEVI LACHAPPELLE: I like to play soccer outside, and I can do it, like, shirtless (laughter). It's fantastic.

GARCIA-NAVARRO: Playing soccer shirtless. That was Levi LaChappelle, Antonino Leonardi and Grace Sur, all enjoying the surprising sunshine here in D.C. There was a surge in warm days around the country, though, this month, as well. According to the National Oceanic and Atmospheric Administration, in February there were more than 4,000 daily record-high temperatures - 70 degrees in Binghamton, N.Y.; 73 degrees in Boston; 76 degrees in Columbus, Ohio.

So we wanted to understand what's happening, so we reached meteorologist Bob Henson. Good morning, Bob.

BOB HENSON: Thank you. Good to meet you, Lulu. Good to be here.

GARCIA-NAVARRO: So tell us - what is going on with this weather?

HENSON: Well, obviously, as your listeners know, we're having a warm winter pretty much everywhere east of the Rocky Mountains in the United States and southeast Canada. And we've had thousands and thousands of record highs this month alone. And we're, you know, on track to perhaps beat the winter of 2015-2016 for warmest winter. So to have the warmest two winters of the last century happen in the last two years is pretty exceptional.

GARCIA-NAVARRO: We heard there are people enjoying the warm weather here in February in D.C., but there are costs to having warm weather so early in the year, right?

HENSON: Right. One of those, in fact, is that plants may get fooled. They may think it's a month or two later than it really is. When we saw this happen in 2012 - back in March of 2012, we had what's been called the Great Warm Wave, where it made it way up into the 80s even in parts of Michigan, even southeast Canada. And it was beautiful. People loved it. Well, in late April, we had a much more seasonal event, which was a hard freeze, and Michigan's agriculture was devastated. It was the worst year on record, hundreds of millions of damage, pretty much a total loss of their fruit crop.

GARCIA-NAVARRO: I guess the ultimate question is - how worried should we be when we see record temperatures two years in a row and winter, seemingly, ending so soon?

HENSON: What we're having this winter, what we had last winter - these are entirely consistent with a warming climate. So I think of it as a flashing red light and a warning sign, and it's a pleasant warning sign. You know, it's hard to not enjoy temperatures of 75 degrees in winter. What we're doing, in some ways - I was watching the climate of New Hampshire become the climate of Connecticut. And then, in decades, that could be the climate of New Jersey.

Imagine states kind of marching southward over the decades, and that's kind of what's ahead of us. There will be variations from year to year, decade to decade, but our climate is warming. And that will manifest with all kinds of twists and turns, not always dramatic, sometimes very subtle. But this is one manifestation of it.

GARCIA-NAVARRO: That's meteorologist Bob Henson. He writes for the blog "Weather Underground." Thanks so much for being with us. 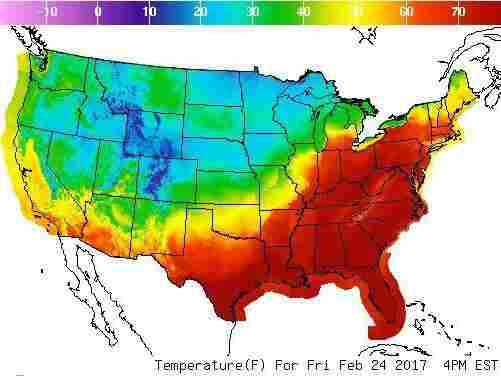 Shortly after 1 p.m. Friday, the temperature in Buffalo, N.Y., hit 71 degrees, according to the National Weather Service, in the latest sign of the mild, even warm, winter that much of the Eastern U.S. is experiencing.

By midday, Boston had also hit 71 — also a record. Both temperatures equal or set new benchmarks for record highs in the month of February.

"That surpasses the 70 degrees reached on Feb. 24, 1985" in Boston, member station WBUR reports. "Records go back to 1872, according to the National Weather Service."

In Buffalo, 70-degree temperatures broke the Feb. 24 record shortly before 1 p.m., according to the NWS office at Buffalo International Airport. It then rose further to 71, equaling a mark set in 2000.

Buffalo's record of 67 degrees on Feb. 24 had stood for 111 years, according to the Buffalo News.

To put that 1906 date in perspective, Theodore Roosevelt was president. At the time, local news included an inquiry into reports of fish being dynamited in the Niagara River, the newspaper says. On a broader level, on Feb. 24, 1906, the author Upton Sinclair was just days away from publishing his seminal novel, The Jungle.

By the end of next week, Buffalo (and other areas) could be facing a return to winter. The National Weather Service predicts a chance of snow on Thursday, with a high near 34 degrees.