Astronomers have discovered a solar system full of potentially habitable planets. Lulu Garcia-Navarro talks to Seth Shostak of the SETI Institute, which searches for extraterrestrial intelligence.

Space geeks and science-fiction fans like me have long dreamed of extraterrestrial life. Well, last week, an international team of researchers announced the discovery of a solar system full of planets that just might be able to support it. So we reached out to someone we thought would be interested in this news, Seth Shostak. He's a senior astronomer at the SETI Institute, which searches for intelligent life out there in the universe. Dr. Shostak, welcome.

SETH SHOSTAK: Thank you very much, Lulu. A pleasure to be here.

GARCIA-NAVARRO: For those out there who are not familiar with the SETI Institute, just describe quickly what it is. SETI stands for the Search for Extraterrestrial Intelligence, right?

SHOSTAK: It does. And our - one of our projects is indeed just that, to try and eavesdrop on, you know, signals that might be being broadcast by other intelligent creatures elsewhere in the cosmos.

GARCIA-NAVARRO: So put this news into context for us. How exciting is this discovery?

SHOSTAK: Well, I think it is somewhat exciting. You know, when I was a kid, and I'd go to the planetarium in New York, they would tell you, you know, planets might be very rare. And now we know that planets are as, you know, commonplace as cheap motels. They're everywhere. What we still don't know is, well, how many of those planets are good ones, the kind that might have, you know, oceans, atmospheres - the kind of thing you would need to have, you know, some interesting biology.

Now we find this TRAPPIST-1 system. It's got seven planets. They're all about the same size as the Earth. And they're at the right distance from their star so that they could have the kind of climate that, you know, you might enjoy in Washington, D.C. I mean, it could be that even all seven of them could support life. But even a few of them are pretty similar to Earth, we think. We don't know that.

GARCIA-NAVARRO: All right. So you at SETI - you're not just looking for any life out in the universe, like microbes, right? You just said you're looking for intelligent life, smart life, people - humanoids, possibly. Do these planets seem ripe for that?

SHOSTAK: Well they might be. What we don't know - and we can't know until we've looked at them with much, much bigger telescopes - is whether they have things like oceans and atmospheres. I mean, we figure you probably need that. If it's just a big barren rock, you know, not much is going to happen. Now, we have the ability to try and look for, you know, fairly advanced life by turning our antennas in the directions of these planets. And we've done that, actually, to see if we can eavesdrop on their equivalent of NPR and pick up signals that would tell us, hey, well, there's somebody out there that's clever enough to have a public radio system.

GARCIA-NAVARRO: (Laughter) And have you picked anything up? Any NPR alien signals?

SHOSTAK: (Laughter) Well, lamentably, we have not yet, no.

SHOSTAK: We've looked over a fairly wide range of the radio dial, too. But on the other hand, you know, this system - it's 40 light years away. So that's - I don't know - 200 trillion miles away.

SHOSTAK: That's pretty far away. You know, our fastest rockets would take almost a million years to get there. So, you know, they may have better rockets. But, you know, they're not coming here, either. But the facts are that the signals would also be weakened by distance. So the fact that we don't pick something up right away may not mean too much. On the other hand, maybe, you know, these guys just still have dinosaurs in their system, and they're not building radio transmitters.

GARCIA-NAVARRO: So if I was standing on one of these planets, and I was looking up into the sky, what would I see?

SHOSTAK: You know, it would be really interesting, Lulu, if you were a resident of this system because you'd look up in the sky, and you'd see these other planets. But they wouldn't look like, you know, bright points of light the way Venus or Mars looks to you when you stand out at night. They would be clear spheres in the sky. And some of them would be pretty big, you know, even bigger than what the full moon looks like to us. So that would be very dramatic, I think.

GARCIA-NAVARRO: If there are beings like us there, do you think they'd be traveling between those planets the way that we've gone to the moon or are planning to go to Mars?

SHOSTAK: Absolutely. You know, for us to go to Mars - if you decide to go to Mars this weekend, it would take you six or seven months to get there. I hope you don't get a middle seat. But if you were in the TRAPPIST-1 system, to go to the nearest other planet, you know, with the same rocket would take you, well, the weekend, a couple of days. And you'd be there. So I think it's a pretty safe bet that if there's any intelligent life in this system, they've probably colonized all seven of these planets. I mean, they've got their own mini-federation of planets right there.

GARCIA-NAVARRO: If you found intelligent life out there, if one day we actually discover it, then what? What happens? Is there a plan?

SHOSTAK: Well, there is a document. It's called the protocols. But I don't actually like that name very much. It sounds somewhat sinister.

SHOSTAK: But yes. And it's not at all sinister. In fact, it has no force of law. The U.N. has never adopted it. I mean, it's just sort of a kind of code of ethics like you might have to sign on your blue book in college or something that you haven't cheated on the exam. All it says is if you find a signal, check it out. Well, of course, you're going to do that. That's just good science.

GARCIA-NAVARRO: That's Dr. Seth Shostak. He is a senior astronomer at the SETI Institute and the co-host of the institute's Big Picture Science radio show and podcast. Dr. Shostak, thank you so much for talking with us. 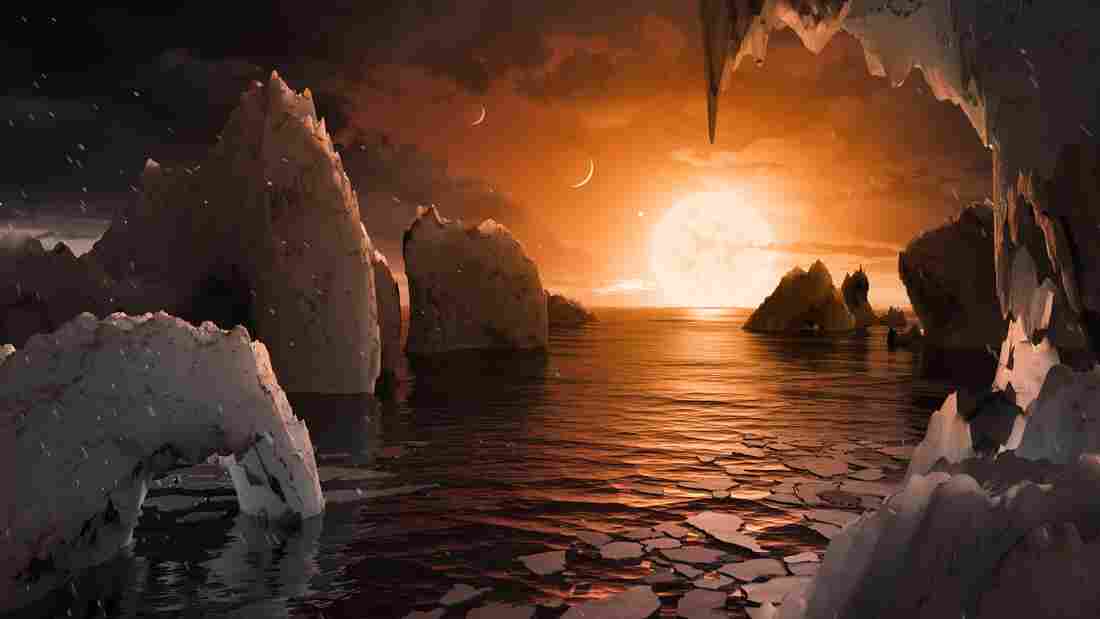 This artist's rendering shows what one of the seven planets, TRAPPIST-1f, might look like. NASA/JPL-Caltech hide caption 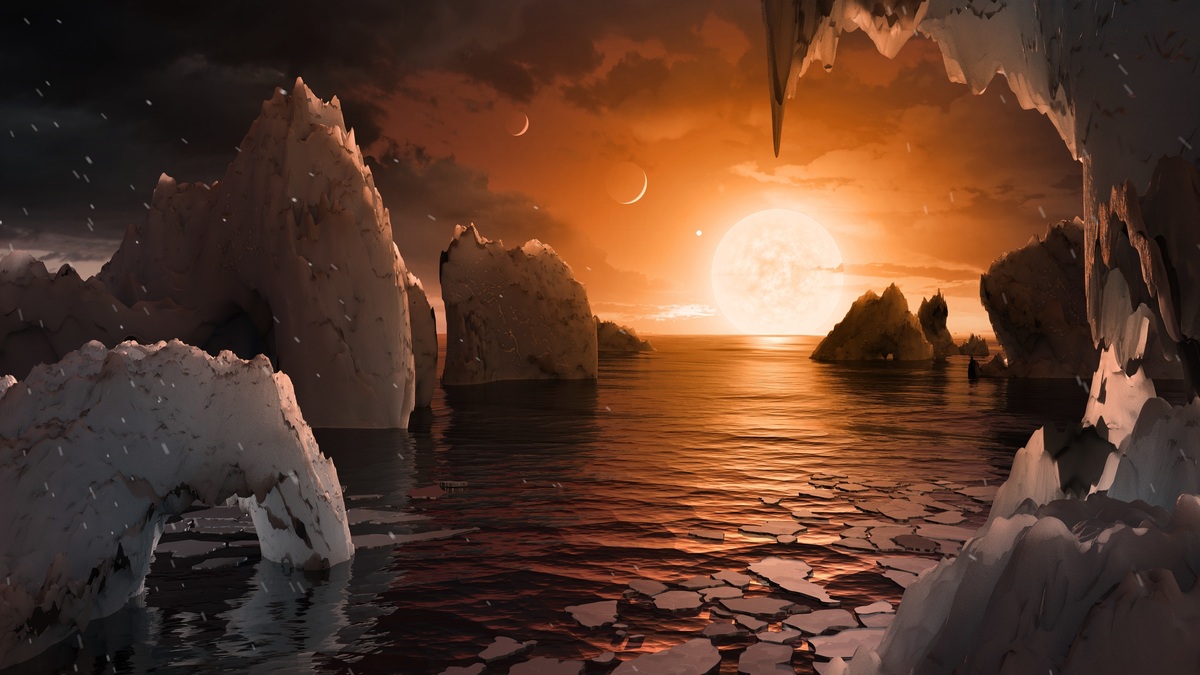 A small, faint star relatively close by is home to seven Earth-size planets with conditions that could be right for liquid water and maybe even life.

The discovery sets a record for both the most Earth-size planets and the most potentially habitable planets ever discovered around a single star.

The strange planetary system is quite compact, with all of these worlds orbiting their star closer than Mercury orbits the sun, according to a newly published report in Nature.

"If you were on the surface of one of these planets, you would see the other ones as we see the moon, or a bit smaller," says Michaël Gillon, an astronomer at the University of Liège in Belgium. "The view would be very impressive."

The cool, reddish star is about 40 light-years away, in the constellation Aquarius. "It's a very tiny star," says Gillon, "10 times smaller than the sun."

Until recently, no one was even looking for planets around so-called ultracool dwarf stars.

About a year ago, however, scientists announced that they'd found three planets around this star. They launched a campaign to study the star more intensively, and were surprised to find four more. All of the planets were spotted by looking for a faint dimming that occurs when starlight is blocked by a planet passing in front of the star.

Julien de Wit of MIT, one of the astronomers on the research team, says these planets have a "winning combination" of being temperate, Earth-size and ideally suited for follow-up observations with telescopes to analyze their atmospheres.

Already, initial observations have been made with the Hubble Space Telescope, he says, and the data is being analyzed. More observations with Hubble are planned to search for signs of water or methane.

Astronomers could get an even better sense after 2018, when the next-generation James Webb Space Telescope is expected to launch. It could provide an in-depth look at the atmospheres of these planets.

Some theoreticians question whether this type of star could support life, since it is so different from the sun and the close-in planets would get hit by so much ultraviolet radiation. "We really cannot know," says Emmanuël Jehin of the University of Liège. "So it looks like everything is possible, at this point. It's very exciting."

This artist's rendering depicts the TRAPPIST-1 planetary system, based on available data about their diameters, masses and distances from the host star. The cool, reddish star is about 40 light-years away from Earth. NASA/JPL-Caltech hide caption

This artist's rendering depicts the TRAPPIST-1 planetary system, based on available data about their diameters, masses and distances from the host star. The cool, reddish star is about 40 light-years away from Earth.

Planet-hunters have recently been gathering more and more evidence that Earth-size planets are common in our galaxy, according to Ignas Snellen at the University of Leiden in the Netherlands, who wrote a commentary that accompanied the scientists' announcement.

This new discovery, he notes, suggests such worlds are "even more common than previously thought."