Accessibility links
Across The Divide, Identity Politics Unites The Base At Both CPAC And DNC In very different ways, immigration and Islam were highlights at both the Conservative Political Action Conference and the vote for a new Democratic National Committee chairman.

Across The Divide, Identity Politics Unites The Base At Both CPAC And DNC

Across The Divide, Identity Politics Unites The Base At Both CPAC And DNC 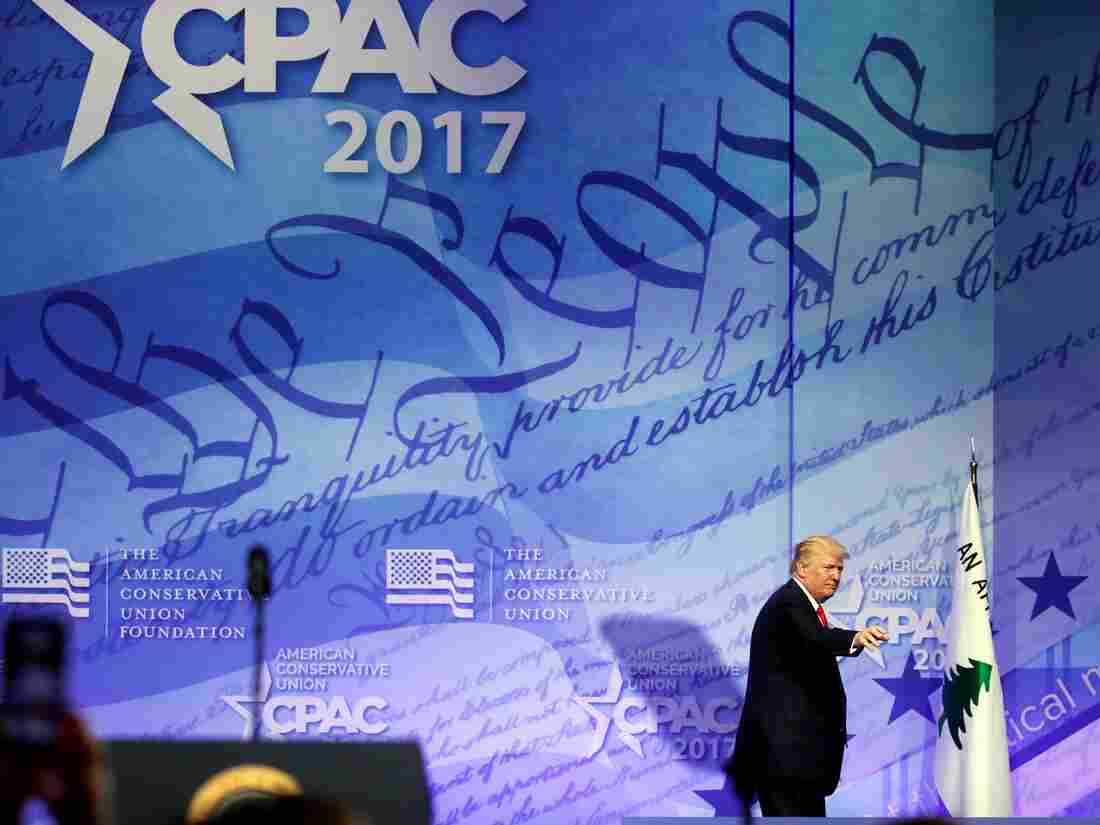 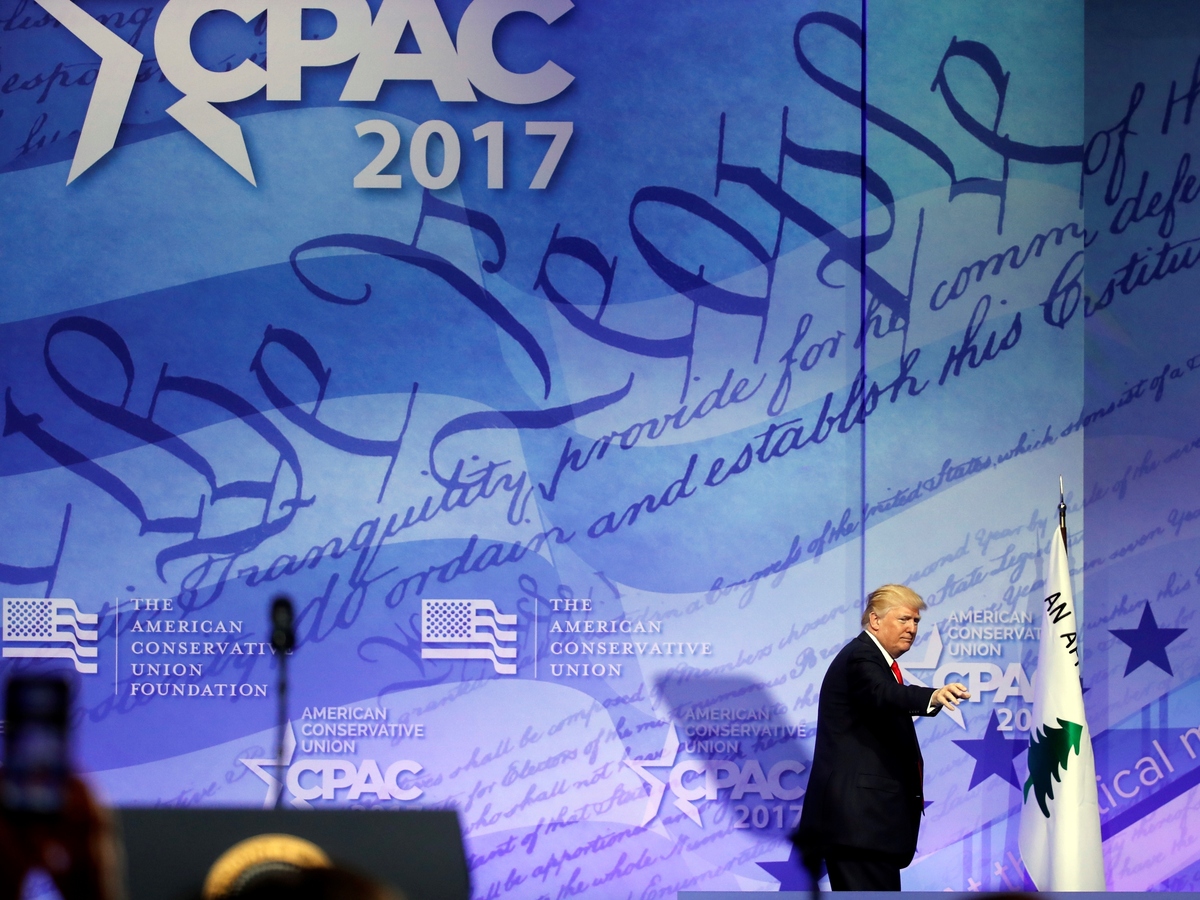 It's a fascinating thing to watch activists in both American political parties grapple with a way forward in the Trump era.

Conservatives gathered outside Washington last week at a convention, the Conservative Political Action Conference, which had been a home for libertarians in recent years. The CPAC annual presidential straw poll has been dominated by people with the last name Paul over the last decade.

Former congressman Ron Paul and his son, Kentucky Sen. Rand Paul, won five of six CPAC straw polls from 2010-2015. Rand Paul didn't even attend this year. And many of his libertarian followers may have stayed home with him, because CPAC this year was very different.

Trump adviser Kellyanne Conway predicted on day one of the conference that it was going to be more like "TPAC." And she was right.

Trump And CPAC: A Complicated Relationship No More

Trump was greeted as a conquering hero — after a couple of days of CPAC that had been, to borrow a Trump phrase, low energy. But when this president spoke, the room, dotted with red "Make America Great Again" hats, lit up and roared with approval.

"Trump! Build the wall! Dishonest media!" came random Trump talking points in shouts from one college-age Trump supporter in the back of the packed room.

No, there weren't lines six blocks long to get in, as Trump asserted from the dais, but there was lots of enthusiasm in that room for him.

A day later, in Atlanta, Democrats gathered to pick a new party chairman. They did – Tom Perez, President Obama's former labor secretary and a finalist for Hillary Clinton's vice-presidential pick. But his election — and the response to it — did more to highlight the continuing rift within the Democratic Party.

When Perez took the stage after the results of the close election were announced – he won by just 35 votes out of more than 400 — supporters of Perez's chief rival, Minnesota Rep. Keith Ellison, who was endorsed by Vermont Sen. Bernie Sanders, stood and voiced their disapproval.

"Not big money! Party for the people!" they chanted over and over and over again. The proceedings were briefly stopped, as Donna Brazile, the interim party chair – with ties to Clinton – tried to gavel the group to order.

"Shut up!" one Perez supporter eventually yelled from across the room at the irritated Ellison supporters.

In reality, it was only about a dozen Ellison supporters who were chanting, and the room erupted in applause when, in his first act as party chair, Perez named Ellison his deputy. Ellison warmly accepted, pledged to work together and told his supporters to support "our" chairman. And most Ellison supporters NPR chatted with said they were disappointed, but fine with Perez. They said they liked his labor background.

And that's what's amazing – that Perez has been targeted by activists as something of a corporate sellout, when he was a former civil-rights attorney and was arguably the most progressive Obama Cabinet member.

Perez is also the first Hispanic chairman of the committee, something that was largely ignored, because of the intra-party bickering and because of another potential first – the possibility of the first Muslim chairman.

Ellison is the first Muslim elected to Congress, and many of his supporters wanted to send a message in the era of Trump — one of inclusivity that the party stands for.

And that was another thread that ran through both conferences – CPAC and the Democratic National Committee chairman's race: Identity politics.

Cruz picked up on it and said, "If they name Keith Ellison, we can commend them for truth in advertising."

At the DNC event, an Imam led the invocation and the "black national anthem" was sung.

At CPAC, like with most conservative events, immigration was the glue. If there were disagreements – about how the U.S. should approach Russia, for example – they agreed a hard line on immigration.

Democrats picked a Latino chairman, whose parents were born in the Dominican Republic.

Bernice King, daughter of Dr. Martin Luther King, Jr., urged Democrats to not only work together, but to try to understand the other side.

After all, she said, "If we don't learn to live together as brothers and sisters — yes, together — we're going to perish as fools."

But that's not where American politics is right now.

Call me Tom. And don't get too happy. @keithellison and I, and Democrats united across the country, will be your worst nightmare. https://t.co/fu7WvLofrD