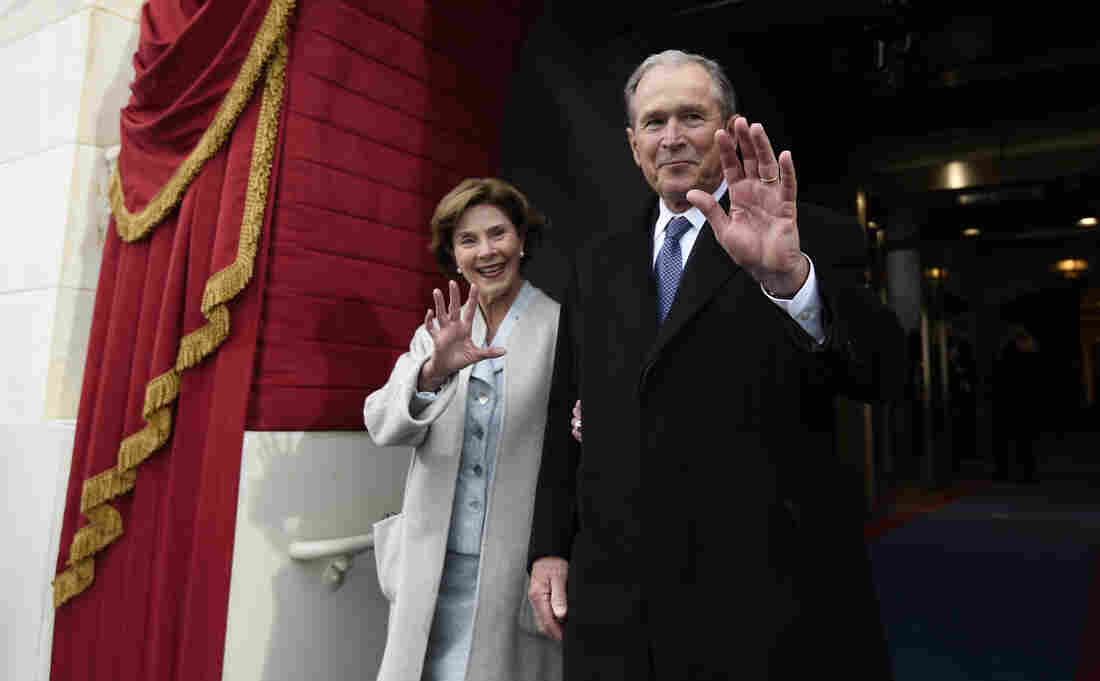 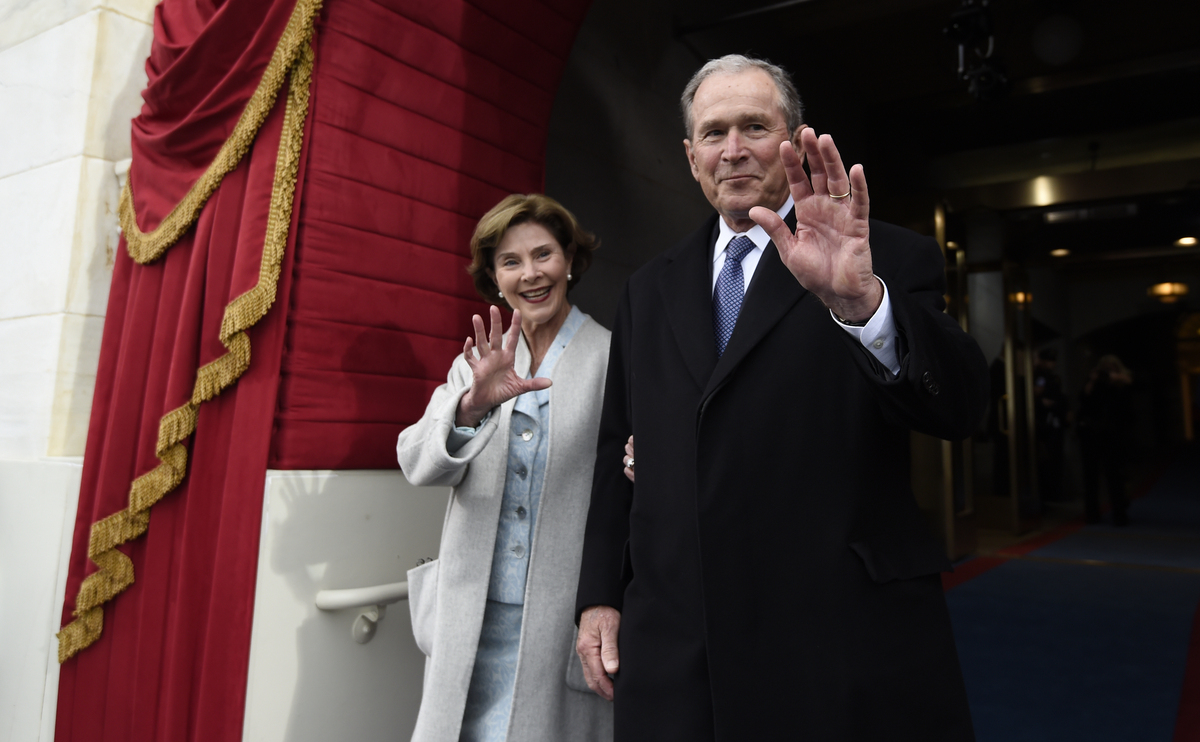 It started out a simple, human interest story featuring a former president and his post-White House hobby — painting watercolors of world leaders, and now, portraits of American soldiers, wounded during military service.

But before long, that president, George W. Bush, made real news by doing something he had never before done in a public forum since leaving office: discussing at length the current occupant of the Oval Office.

Bush spoke on the set of NBC's Today show. Then, hours later, came an interview with People magazine, and more language that can only be seen as a careful critique — but still a critique — of the early days of the Donald Trump presidency.

This is not just another president weighing in on public events and American politics.

In fact, all through the Obama years, Bush avoided opining on questions about the policies of his successor. He held his tongue when Obama reversed his executive orders. He was quiet when Obama likened Bush-era policies to driving the car "into the ditch." Bush once told CNN, "It's a hard job. It's difficult. ... A former president doesn't need to make it any harder." In a speech in Canada just weeks into the Obama presidency, Bush told his audience he wouldn't spend his time criticizing Obama, "and if he wants my help, he can pick up the phone and call me."

Which brings us to NBC's Today on Monday morning.

It was Bush's first interview since Donald Trump was sworn in as president.

Bush was promoting his newest paintings, featuring the faces of wounded soldiers. They have been collected in a book called Portraits of Courage: A Commander in Chief's Tribute to America's Warriors.

Host Matt Lauer started by asking about the division in the country following the brutal 2016 presidential campaign, and about how the transition to President Trump compared with when Bush took office after the controversial 2001 election. (In both cases, the loser of the popular vote won in the Electoral College.) Bush said it's hard to compare: "One thing's for certain, though; the job's a tough job." But the former president did say that healing divisions requires a lot of people coming together to unite the country — the clear implication being that the president plays a role in that.

Bush said that you have to take President Trump at his word that he wants to unify people. He also stressed that Trump has only been in office a little more than a month.

During his first month in the White House, President Trump has repeatedly hurled insults and attacks on news organizations. On Twitter and in speeches, labeling the media "the enemy of the American people."

Today's Matt Lauer noted that President Bush — who took the country to war in Iraq, and who presided over an economic crisis — faced plenty of criticism from the media while in office. Lauer asked Bush, "Did you ever consider the media to be the enemy of the American people?"

Bush chuckled and then answered: "I consider the media to be indispensable to democracy. We need an independent media to hold people like me to account. Power can be very addictive. And it can be corrosive. And it's important for the media to call to account people who abuse their power, whether it be here or elsewhere."

Bush noted that he spent a lot of time trying to persuade Russian President Vladimir Putin to accept the notion of an independent press.

Unlike Bush, Trump Invokes Terror Threat And Gets Pushback, Not Deference

That led to an exchange about the controversies involving Russia's alleged attempts to influence the 2016 presidential election, including reports of contacts between top Trump campaign officials and the Russians. Asked whether he would like a special prosecutor to look into the issue, Bush said: "First of all, I think we all need answers — whether or not the special prosecutor is the way to go or not, you're talking to the wrong guy."

Bush stressed that he is not a lawyer, so he wouldn't weigh in on the best approach, but on the reports about Russia and the election, he did say, "I am sure, though, that that question needs to be answered."

The discussion segued into talk of the days right after the terrorist attacks of Sept. 11, during Bush's first year in office. In the aftermath of that shocking, terrifying moment, Bush, as president, stressed to Muslims around the world that he had respect for their faith — a faith practiced by many Americans. He repeatedly made it a point to call the teachings of Islam good and peaceful. "We are not at war against Islam," Bush would often say.

Trump makes no such careful distinction, blasting the Obama White House and those who refuse to use the phrase "radical Islamic terrorism."

"That's very different talk than what we're hearing today about a 'Muslim ban,'" Lauer said. "Do you think the president's position on this has been well thought out?"

Bush responded that the right to worship freely, or to not worship at all, is a bedrock of freedom in the U.S.

"You see, I understood right off the bat, Matt, that this is an ideological conflict, and people who murder the innocent are not religious people," Bush said. "They want to advance an ideology, and we have faced those kinds of ideologues in the past."

Asked point blank if he supports the ban on travel from the seven predominantly Muslim countries that were included in Trump's executive order, which is now being challenged in the courts, Bush said he is "for an immigration policy that is welcoming and that upholds the law."

In the conversation with People, Bush said "I don't like the racism."

The People interview, in Bush's painting studio at his Dallas home, was conducted by journalist Sandra Sobieraj Westfall, a former wire-service reporter who covered the Bush presidency. She asked if he would begin to speak out more, to take on some sort of leadership role. Bush responded that he won't be doing that. But his Presidential Library in Dallas is involved in the issues of the day.

Here's a passage from the interview, where Bush describes the work he and former First Lady Laura Bush are doing:

The couple list some of the center's work that stands in contrast to Trump's isolationism: immigration ceremonies, women's reproductive-health programs in Africa, and leadership training for Muslim women that the Bush Center brings to Texas from the Middle East. Asked if Trump's determination to restrict immigration and travel from Muslim countries threatens the Bush Center programs, he shrugs. "Now that you mention it, it might bother me but we'll figure out how to bring them over."

"There's a lot of ways to speak out," the former president says, "but it's really through actions defending the values important to Laura and me. ... We're a blessed nation, and we ought to help others."

In both interviews, Bush does stop short of direct and blunt criticism of Trump. But his willingness to engage on controversial, ongoing topics involving the White House — and a president of his own Republican Party — is a significant departure from what he did during the eight years when his Democratic successor, President Obama, was in office. Bush might have simply said that this is all now on the current president's plate and declined to weigh in. He didn't.

There is no love lost between the Bush family and Trump. Former Florida Gov. Jeb Bush — and by extension, George W. Bush — were often ridiculed by Trump during the 2016 primaries. "Low-energy Jeb" was one of Trump's favorite putdowns. Last year in February, George W. Bush campaigned for his younger brother in South Carolina, the state that turned out to be candidate Jeb Bush's last stand.

Perhaps this week's comments from the 43rd president stem from lingering bad feelings over 2016. Whatever the reason, they are consistent with his long-held belief. And they are a departure from his practice of not providing fodder that can be interpreted as casting judgment on a sitting president.

In these interviews — even as he promotes his paintings and his book about wounded warriors — he seemed to jettison any such concern.