Listen · 4:07 4:07
GOP Looks To Trump's Address To Rally Lawmakers Around An Obamacare Strategy 4:07 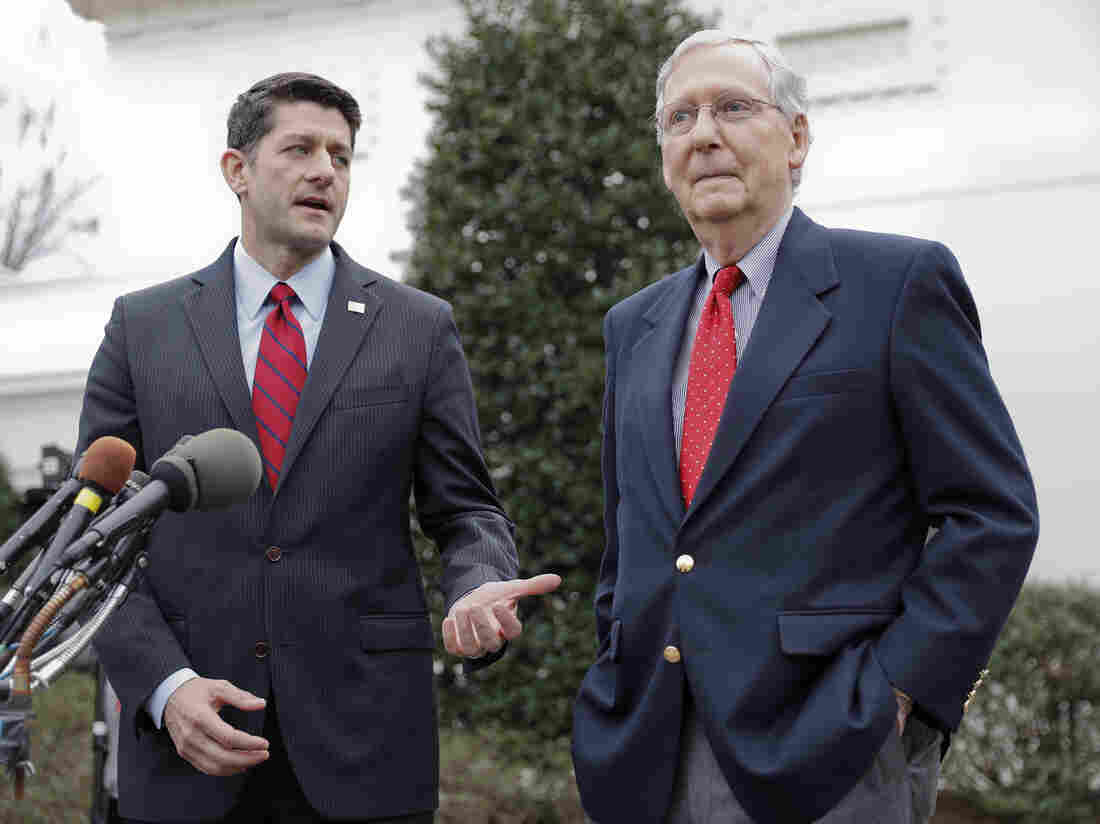 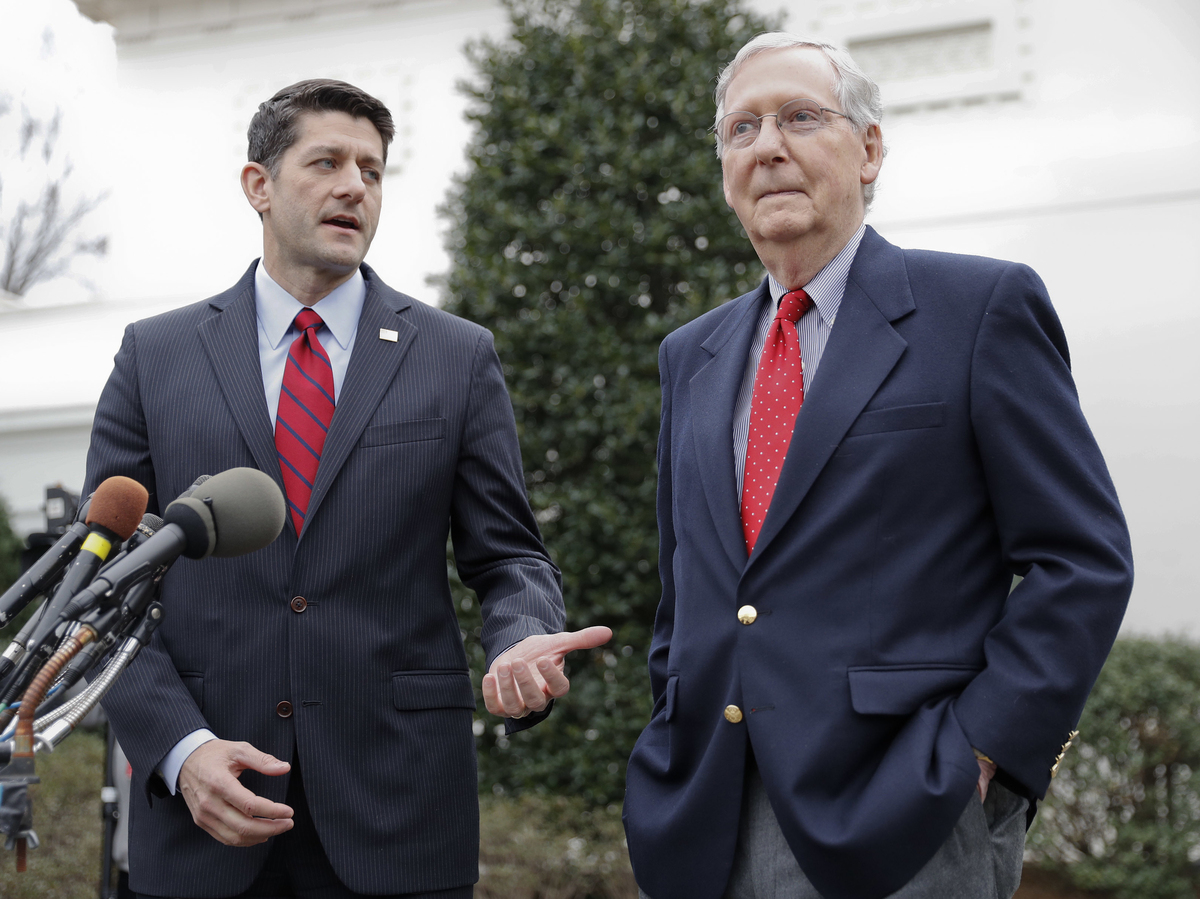 Republicans are looking to President Trump to use his address to Congress Tuesday evening to define the party's path forward on how to deliver on the long-promised pledge to repeal and replace Obamacare.

The White House has, so far, ceded the decision-making to congressional leaders who are trying to unify competing moderate and conservative lawmaker demands behind a plan that can pass with narrow majorities in both chambers.

The only legislative proposal on the table at the moment is being crafted by House Republicans and guided by House Speaker Paul Ryan. Senate Republicans have not authored a plan, nor has the White House publicly outlined much in the way of policy specifics.

White House aides who briefed reporters on Monday evening would not say how specific the president would be about health care in his address. They said the speech is being crafted with input from listening sessions the president has held, including on that issue. On Monday, Trump met with health insurance executives, and the president held his latest of several meetings with top congressional leaders.

A GOP proposal that's still coming together on Capitol Hill would end the Medicaid expansion enacted in 31 states and eliminate the individual mandate, as well as other taxes created by the Affordable Care Act. It would replace the mandate with a tax credit to encourage individuals to buy insurance instead. It would also allow higher contributions to health savings accounts, but it would eliminate minimum coverage standards established by the Obama administration and let states decide what services must be covered by insurance.

"There are serious problems with what appears to be our current path to repeal and replace Obamacare," Rep. Mark Walker, R-N.C., said in a statement in regards to the draft proposal. Walker chairs a bloc of influential conservatives in the House, and he said he could not "in good conscience" recommend any conservative vote for it in its current form. One of Walker's complaints is the proposal does not do enough to contain costs.

However, Health and Human Services Secretary Tom Price has privately told congressional Republicans that the White House is fully on board with the emerging proposal.

White House spokesman Sean Spicer told reporters Monday that Trump will speak to health care and his "patient-centered alternative" in his Tuesday address. Spicer said the White House wants to see a legislative proposal "within a matter of weeks."

Ryan and Senate Majority Leader Mitch McConnell, R-Ky., also huddled with Trump at the White House on Monday. The speaker has maintained that the House will act on Obamacare repeal-and-replace legislation in March. "We're going to be rolling out our plan very soon," Ryan pledged.

A focal point of Tuesday's address will be just how far the president goes in embracing the emerging House GOP plan. Trump and his senior aides have at times made promises about the overhaul that Congress is unlikely to keep--such as a pledge to cover more people, with better coverage and at a cheaper cost.

Trump spoke candidly about the complexities of U.S. health care policy on Monday in remarks at a meeting with the nation's governors. "It's an unbelievably complex subject. Nobody knew that health care could be so complicated," Trump said.

One governor who does understand the complexity is Ohio GOP Gov. John Kasich, who is lobbying Trump to keep the Medicaid expansion in place. Kasich's efforts underscore the many divides within the GOP over the best policy solution that comes with the least amount of political risk.

Dozens of Republicans lawmakers have in recent weeks faced large, angry crowds at town hall meetings largely driven by concerns about how the repeal-and-replace effort would affect coverage. It's unclear still how this public pushback could affect GOP strategy.

Democrats are unanimous in opposition to GOP repeal-and-replace efforts. In a Monday "prebuttal" to Trump's address, Senate Minority Leader Chuck Schumer noted the GOP's failure to coalesce around a single plan or pick up any Democratic support.

"I predict the discord in their party will grow as Republicans return to Washington after a week of angry town halls," said Schumer, who added another prediction: "I believe the odds are very high that we'll keep the ACA. It will not be repealed."

Obamacare has provided coverage to about 20 million Americans. About 6% of Americans receive insurance on the individual market. The vast majority of Americans are covered by insurance provided by their employer.